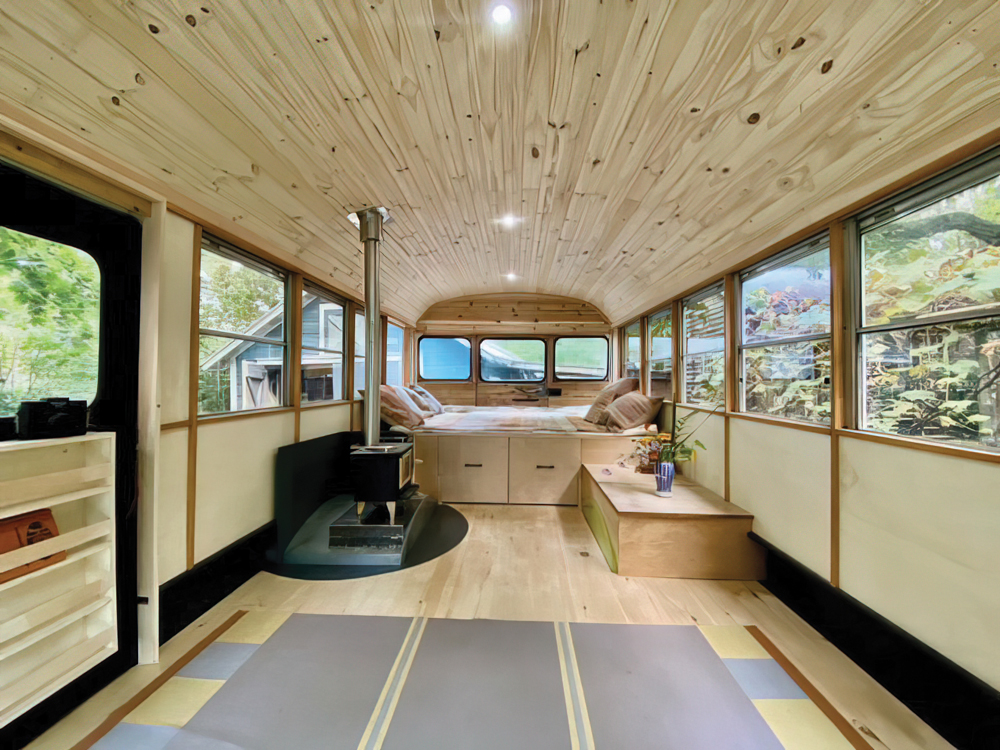 Whether he’s designing a life-size elephant structure, retrofitting a school bus, or crafting a greenhouse from salvaged windows, Paul O’Connor likes to think of himself primarily as a problem solver.

Throughout his varied career, the multitalented designer has drawn inspiration from the problems presented to him. Ask him to solve a design problem, especially a difficult one, and it sparks a creative vision. His career began with the creation of a sea monster for a pool display in a Poughkeepsie store. “They hired me to build a 20-foot pink sea monster, coming out of a pool with smoke coming out of its mouth,” says O’Connor. “I was only 20.”

Stagecraft was so much fun that O’Connor delayed going to college. “My primary interests then were art and sculpture,” he says. “So, I started working for a special effects company and I learned a lot about casting and special effects. That led to a job working on Broadway scenery. I worked for a company that worked on some really big shows, like ‘Phantom of the Opera’ and then I learned a lot more about sculpture and fabrication. Set design and set construction involved all my areas of interest—painting, drawing, sculpture, materials and special effects.” 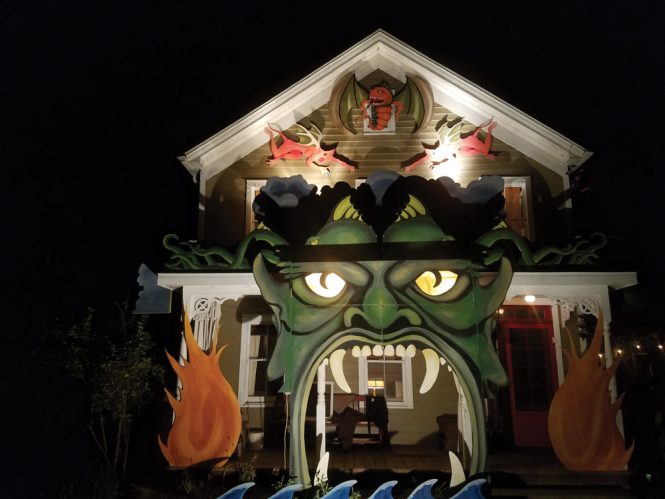 O’Connor and his wife create elaborate decorations for their house on Halloween.

Best of all, the work involved solving artistic and/or structural problems. “That’s most exciting to me and that’s why I like to do a lot of different things,” says O’Connor. “Theater was a very good avenue for that because it involved so much of that out-of-the-box thinking and no day is the same as the next. But I was not really compelled by the theater industry so much as the design work.”

O’Connor also enjoyed teaching and for 20 years taught stagecraft and construction at Vassar College. Ask O’Connor how he would sum up his many talents and he finds it difficult to answer. The Poughkeepsie native is uncomfortable calling himself an artist and he retired from teaching last year. “Lately I’ve been quite interested in design-build projects where I’m not only building them, but I’m designing them for people who want to make an addition to beautify their property or make their spaces more useful.” 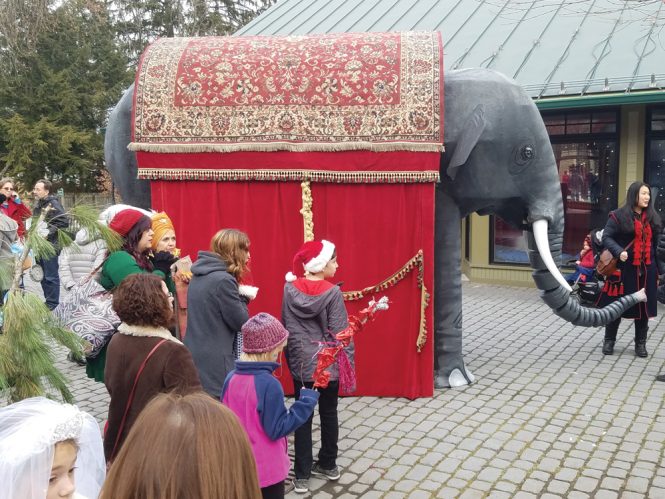 A life-sized elephant whose interior is a puppet show theater that O’Connorr created for the Sinterklaas Festival.

At his workshop in Bloomington, O’Connor fashions furniture; crafts architectural elements like Victorian pocket doors; and drafts projects, such as the timber frame gazebo he built for a couple who wanted a wine tasting pavilion to match their old house.

A favorite recent project was retrofitting an old school bus, cladding the metal interior in pine with cedar accents, then adding a sleeping platform and welding in a mini stove. “Someone I know had this on their property and they have a beautiful backyard with a view of the Shawangunks,” says O’Connor. “They use it as a guest house and they go out there to watch the sunset.”

He’s also designing a one-of-a-kind greenhouse in Red Hook. “They’ve been collecting windows for 20 years, hoping to someday build a greenhouse and then they found me.” 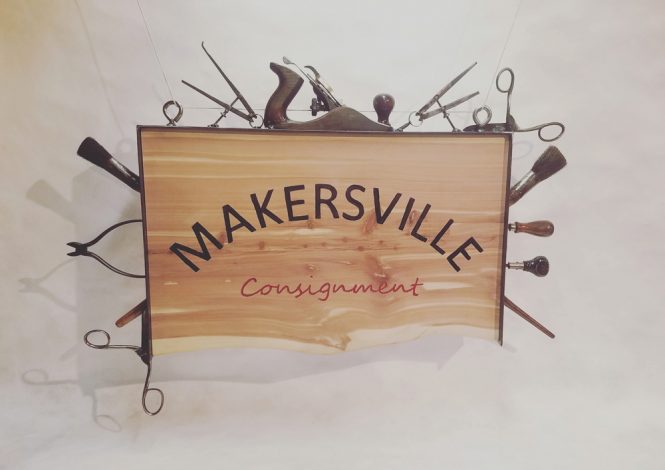 A sign made from welding vintage metals tools for a consignment shop in Catskill.

After creating the extraordinary, O’Connor finds it satisfying to enhance the ordinary. “Theater is an inherently wasteful industry,” he said. “It was very exciting to me in a lot of ways and I loved teaching, but I like the idea of something being a little more permanent, of adding to people’s lives and homes. I think COVID had a lot to do with that. Everybody is looking at their spaces, wanting to be comfortable and upgrade, to use their space differently.”

He does rely on his stagecraft experience to create sculptures for the yearly Sinterklaas Festival in Rhinebeck. “My thing was to do these large sculptural walk-in constructions where there would be an event inside. One year I made a life-size elephant that you could walk inside.” The interior, decorated to resemble a Moroccan palace, was large enough to host a puppet show. “It was made from a lot of pieces, especially because it had to be assembled on site in one day and then removed at the end of the day,” says O’Connor. “It was a very logistical piece. It was big enough for eight to ten kids to be inside at one time.” 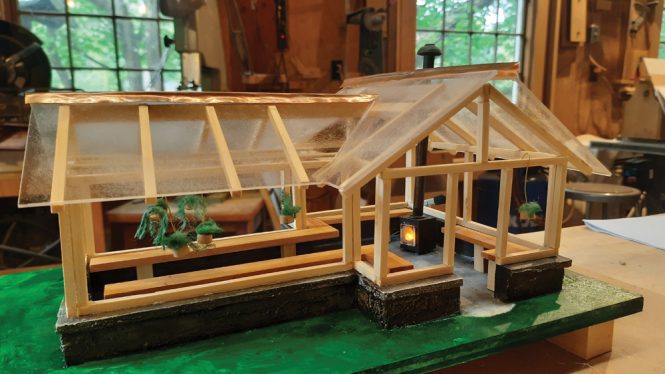 Part of O’Connor process for working out details and sharing ideas is building scale models. “I have worked as a set designer and in scenery construction for years and it is an old habit,” he says. “This greenhouse is for a couple that have been saving windows for years. Incorporating used windows into this particular design is a dream I have also had for years.”

Framed with wood, chicken wire, and muslin, finished with paint and glass eyes, the elephant took two months to build. It had a moving trunk that could tap children on the shoulder.

The couple who asked O’Connor to build a greenhouse contacted him after visiting the festival. Looking at the elephant, it was obvious that O’Connor knows how to make things work. “Ever since I retired, these projects have sort of been coming to me,” says O’Connor. “People ask, oh you’re free? You do unusual things. How about looking at this project?” While O’Connor may be reluctant to describe himself as an artist, solving problems is an art he excels at.