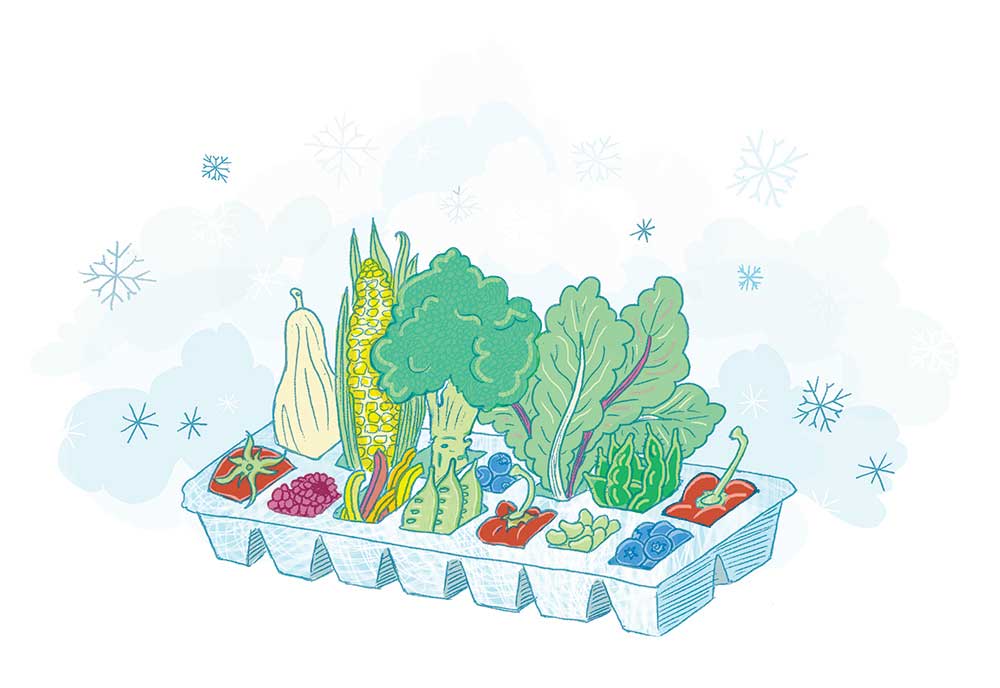 It started, as many good things do, with kale. A big bunch of lacinato was sitting on Jim Hyland’s table in his home in New Paltz, the bounty of his weekly CSA share. “There was no way I was going to be able to use it all,” he says. And then, the proverbial light bulb went off. “I realized that I could freeze it.”

The Hudson Valley, once known as the “breadbasket of New York,” is a hotbed of agricultural activity, with some 4,000 farms and 659,394 acres of farmland. But there are two big hurdles farmers still have to climb: surviving the winter and dealing with excess, or damaged, crops. Hyland found a way to deal with both.

That fall, he filled his freezer with extra vegetables from his CSA share for use all winter long. When he found out that excess kale is often plowed under instead of frozen for later use, he realized he could rescue lots of vegetables by way of freezing. The experiment was so successful that Hyland is now the owner of Winter Sun Farms, a New Paltz-based company that purchases fresh produce from local farms in the warmer months, freezes it, and then distributes it throughout the winter.

Winter Sun works with 30 different farms, flash-freezing their crops using a nitrogen-tunnel freezer that preserves the maximum amount of flavor, thanks to its speed. “They go from fresh to frozen solid in six to eight minutes,” says Hyland. Each product—blueberries, peppers, sweet corn, green beans, edamame, broccoli, and cauliflower, among others—displays the name of the farm from which it came. The vegetables may be frozen, Hyland says, “but we know who’s growing these vegetables and exactly where they came from.”

They also know where the products are going. Winter Sun has developed winter farmers’ markets in Kingston, New Paltz, and Poughkeepsie, and has distribution points, where members can pick up winter shares, throughout the Hudson Valley and in many spots in New York City.

Winter Sun now has some 3,000 members, and its reach, both to farmers and to customers, is vast and inclusive. “We have three- to four-acre farms and farm groups that have thousands of acres,” Hyland says. “We hit every market that you could possibly think of, from small stores in New York to individuals to winter shares, CSA groups, schools, and broad-line distributors.” His customers include Bard and Vassar Colleges, SUNY’s New Paltz, Albany, and Purchase campuses, and other institutions.

Hyland’s operation grew so big that he opened a 30,000-square-foot facility in Kingston called Farm-to-Table Co-Packers, a “contract packaging facility that produces everything from frozen vegetables and soups to jarred pickles and sauces,” according to its website. “It’s an aggregation center,” says Hyland.

“Farms bring it here, we process and freeze it and then distribute it.” He calls it a “Hudson Valley good hub” that sells jars of preserve and applesauce, tomato sauce, and pickles. “Hundreds of thousands of pounds of local produce come through our facility each year,” he says.

Earlier this year, a local farm had a huge crop of spinach that had been pockmarked by hail. It was delicious and in season, but unsellable in retail markets. “We asked the local colleges if they’d take it as a chopped product, and they said yes,” says Hyland. “We bought the whole field and froze it in five-pound packs.” Another farm near Albany had a crop of butternut squash that didn’t look good enough to hit the retail market, but was perfect on the inside. “We cut it into chunks and sold it as puree,” says Hyland. “It might have gone to waste.”

There are still challenges to being in the vegetable rescue business, especially in convincing customers to pay more for products that they can get for less in the frozen foods section of their local supermarket (shares in the Hudson Valley are $132 for five months). “You need schools and consumers to say, ‘I value this for more than its taste,’” he says. But the taste, he promises, is great too.