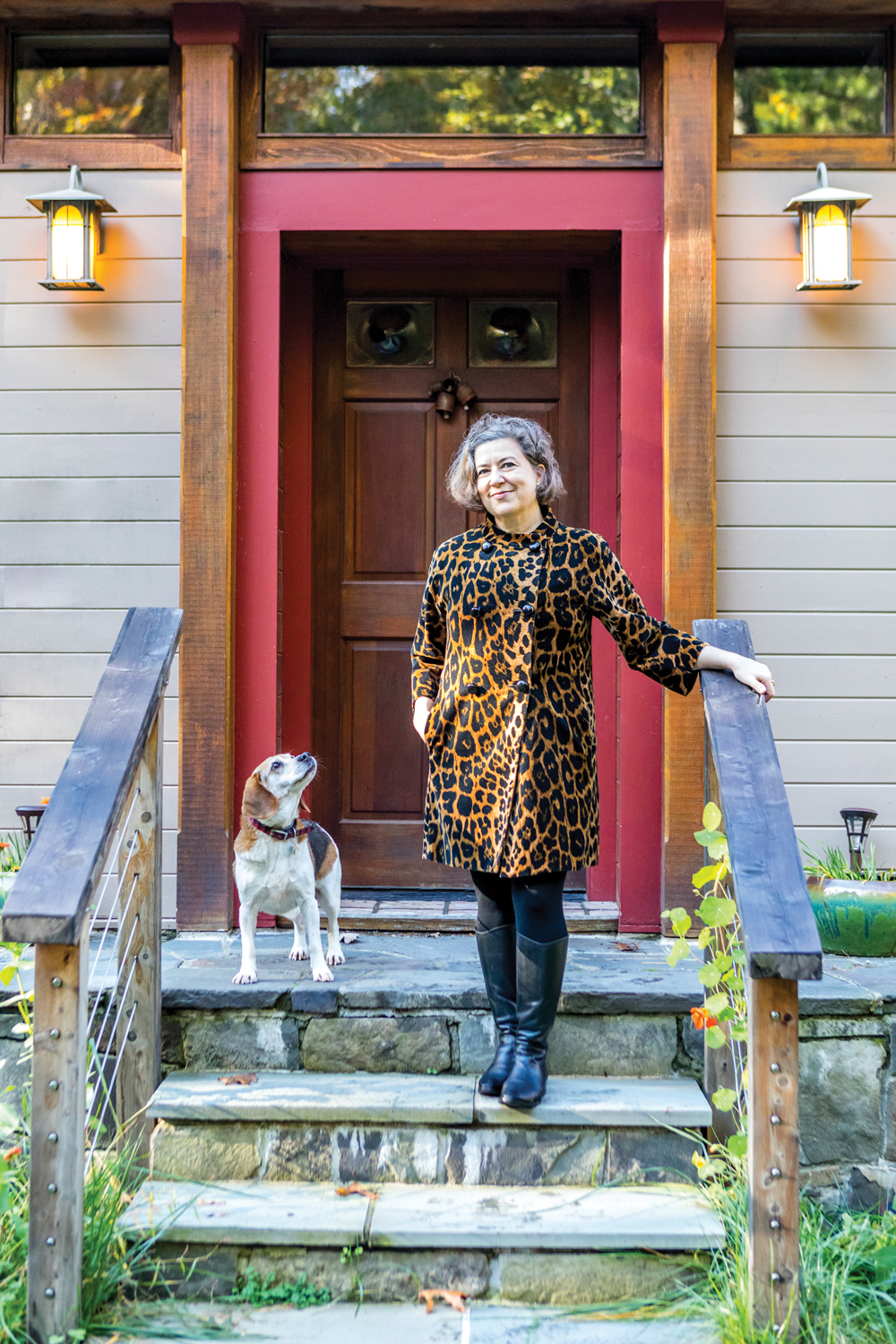 “I am passionate about living with art in the home,” says Anne Sanger.

Step just a few feet inside her immaculate, Craftsman-style house in the forested Ulster County town of Hurley, and it’s abundantly clear that the artist and gallerist isn’t kidding around. Look around the home’s bright, expansive, first-floor main space, and you’ll immediately see that it’s filled with vividly hued original artwork—made by others as well as Sanger herself—and crisp, clean-lined, functional furnishings curated to beautifully offset the owner’s ever-changing art collection. Her nine-year-old beagle, Vladimir, naps on the muted-print rug in the lounge area, sweetly oblivious to it all. “I’m lucky enough to have found a house with lots of wall space, alongside these incredible windows.”

It was in 2016 that she found the 2,000-square-foot, three-bedroom, three-bathroom home. “I bought the place basically turnkey in 2017,” recalls the Midwest-born Brooklyn transplant. “I just painted the interior walls after moving in—and bought most of the furnishings online during a blizzard, sitting on a mattress in an empty house.” 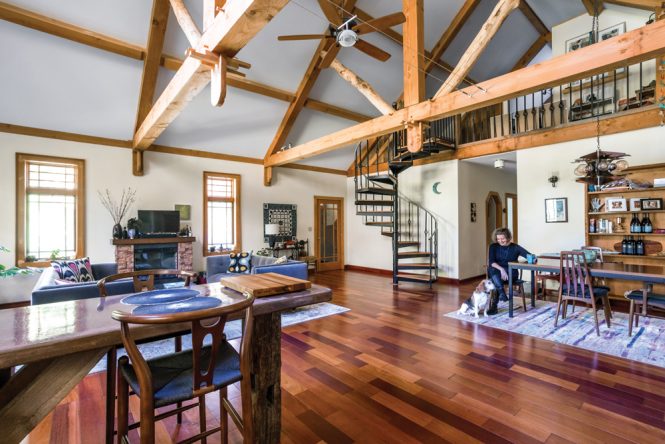 Anne Sanger sourced many of the furnishings for the first floor of her home from local retailers. The wingback bar chairs are from Exit 19 in Kingston, the chandelier is from Madame Fortuna in Narrowsburg, the bowl on the dining room table is from Upstate Capitol Market in Kingston. Sanger loves the open-plan layout. “It’s a living room, it’s a dining room, it’s a kitchen—it’s loft living essentially,” she says.

Blizzards have a way of following Sanger around during moves. One was also raging the winter day in 1994 that she moved into a Williamsburg apartment after graduating from art school in Cincinnati. Settling into a career in the fashion industry as an illustrator, Sanger bounced between Brooklyn and London for the balance of the ’90s and into the ’00s. In 2014, she sold the Brooklyn Heights apartment she’d bought in 2003, using the proceeds to briefly rent a Midtown Manhattan studio and biding her time while she set her sights on real estate listings in the Hudson Valley’s more wooded spots.

“Besides being such a beautiful, quiet area, there’s just so much [artistic] talent here,” says Sanger, who commuted to the city one day a week to her job at American Eagle Outfitters and telecommuted the rest of the week for her first three years in Hurley; during the pandemic it was telecommuting only until she stepped away to concentrate on freelancing and her artistic pursuits. “I had gotten to be obsessed [with the Hudson Valley]. I’d been renting a little cottage in Hurley for a while before I bought this house, and was taking long weekends up from the city for workshops at the Woodstock School of Art. But after years of working for someone else, I needed to do something for me. I needed to paint. And along with having the space and the natural light to do it in—which isn’t easy to come by in New York—obviously it was really important to me to be somewhere where I could be connected to a really good arts community.” 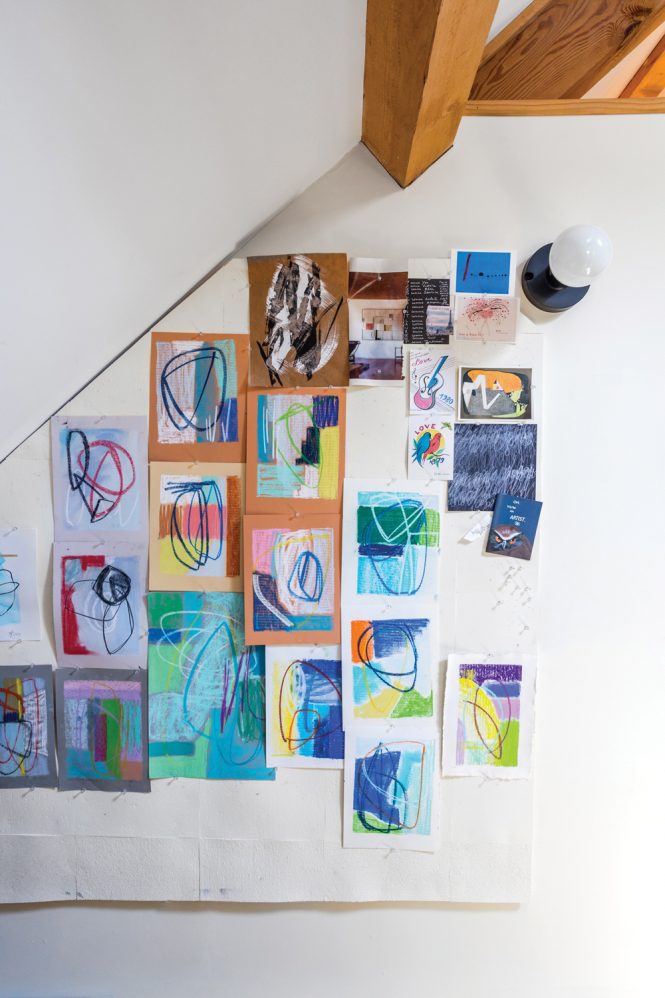 Soon after the move she broadened her new community connection while realizing another long-held dream: opening an art gallery. Sanger’s Pinkwater Gallery, in the historic Stockade District of nearby Kingston, was launched in September 2019. Named for one of her own series of abstract paintings and focusing on paintings, drawings, photographs, and small sculptures by other local artists as well, Pinkwater presents wares that have been, as its website explains, “selected specifically with an eye toward beautifying a home.” Pieces by many of the artists shown at Pinkwater, painters Melanie Delgado and Joan Ffolliott and Sanger’s fiber-artist mother, Suzanne Sanger, for example, grace the gallery’s walls as well as her home’s. So, then, is her home an extension of the gallery—or vice versa?

“It’s intertwined,” she muses. “Sometimes I kind of use the house as a lab, to see how something looks before putting it up in the gallery. With the gallery I mostly want to tap people who haven’t really shown much before and to build up a back stock of their work. The pieces by the artists showing at Pinkwater go in waves, filling in the [inventory] gaps there as they create their work.”

An Abundance of Art

Constructed in 2003, the home is situated on 1.5 thickly wooded acres, with a huge back yard for Vladimir—named for Lolita author Vladimir Nabokov—to amble around in. The rustically beautiful rock formations that once made the region a center for the quarrying industry border the property and are also found throughout the surrounding woods. A sprawling deck, recently refinished and shaded by tall pine trees, offers plenty of space and seating areas for al fresco dining and entertaining, while a barn-like outbuilding has storage for gardening supplies and other implements. 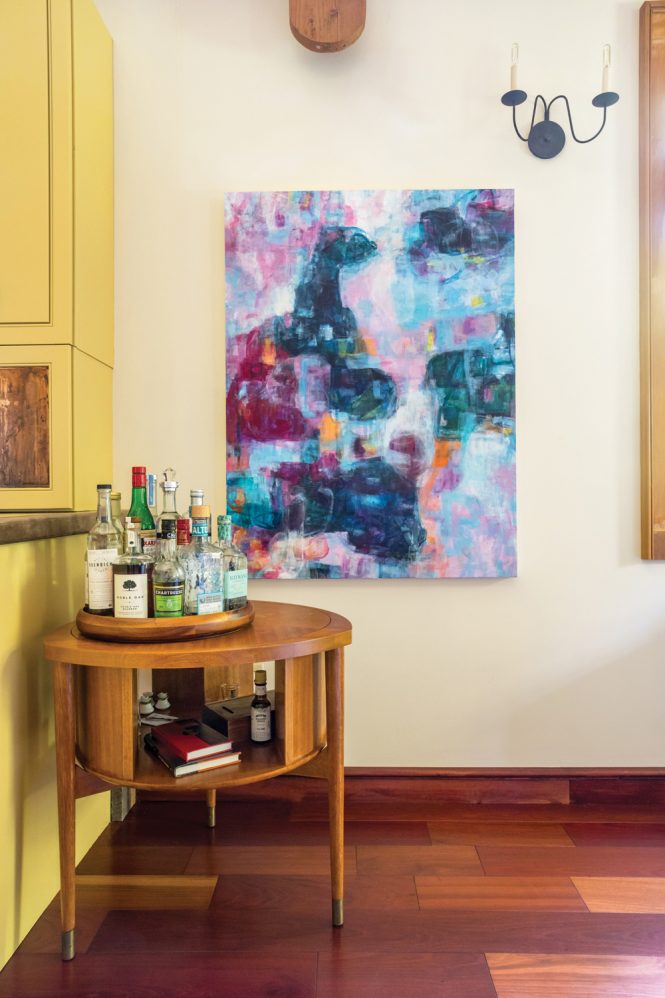 The bar cart is a repurposed library table Sanger bought at Exit 19. The painting, Bijoux, by Sanger, was recently sold. “I decided to put it up and live with it until I have to deliver it,” she says.

Inside, art is literally everywhere. Colorful, framed-and-matted images, mainly pieces of the type that give Pinkwater its contemporary abstract signature aesthetic, line the walls of the downstairs hallway and two bedrooms, one of which serves as Sanger’s. “Originally, it was kind of a peach color, like the inside of a womb or something,” she says, with a roll of her eyes. “I repainted it in a bluish color by Benjamin Moore called Gentleman’s Gray. I know some people might shy away from darker colors, but it makes the art pop and makes me so calm that I just sleep like a baby in here.”

Done up in blue and white tile and boasting a formidably deep soaking tub, the en suite bathroom has a French provincial look. Repainting also did wonders for the wood-paneled hall bathroom, which features a tall walk-in shower. “It was just this sort of lodge-style, stained wood, very doughty to me,” say Sanger, who redid the chamber in a navy hue, bringing a feel that’s both classy and calming. “It’s amazing, what a few simple coats of paint can do.” 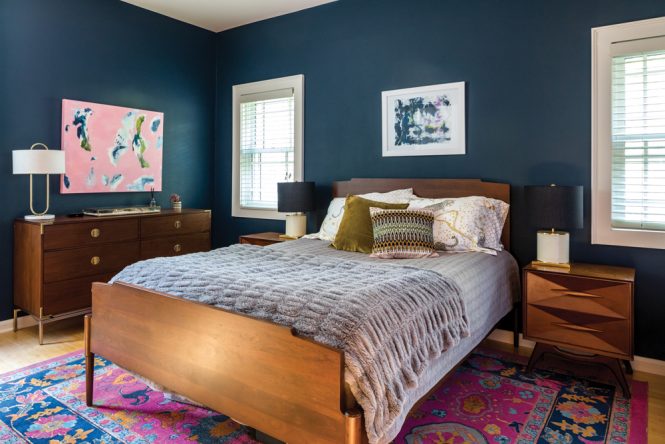 The primary bedroom features two paintings Sanger made years ago. “I like to keep my early work around me so I can remember where I came from,” she says. The name of her Kingston gallery, Pinkwater, is taken from the Pepto Bismol pink color of the painting over the dresser. The midcentury bedside tables are from Green in Saugerties.

Perhaps the piece de resistance, however, is the upstairs space. Formerly the primary bedroom area, it’s been refashioned by Sanger to become the roomy artist’s studio she’d long pined for during her Big Apple days. With an adjoining seating area that contains a day/guest bed, the peaked-ceiling atelier has large skylights that saturate her easels and work areas with warming sunlight. The floor’s original bathroom sink has been replaced with a sizeable slop sink to make cleaning up after painting and drawing sessions easy, while the open edge of the loft-like space looks down on the first-floor main space through massive wooden ceiling beams. 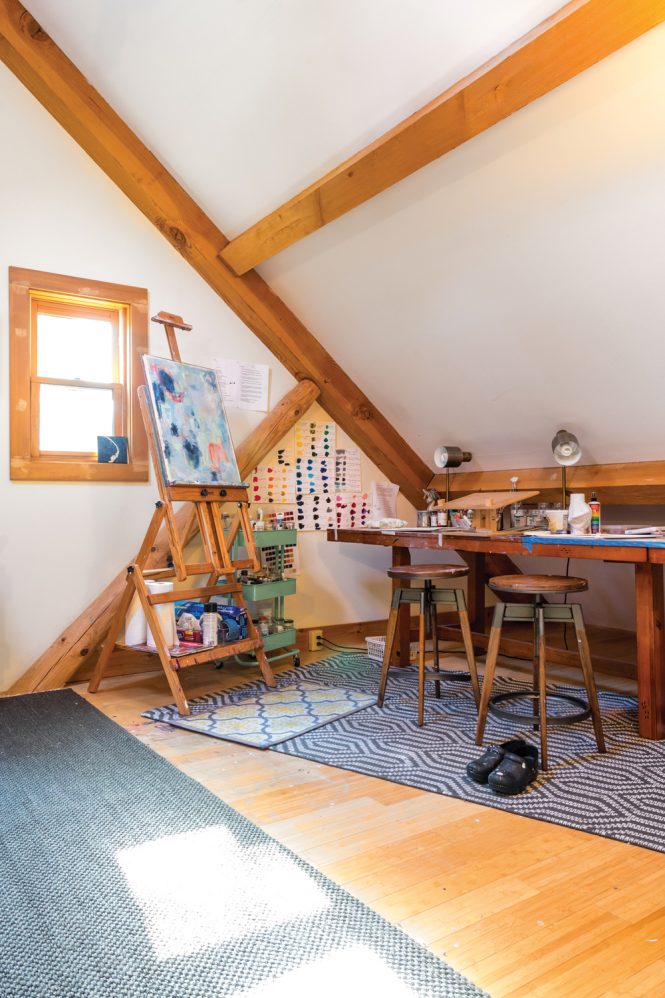 Formerly the primary bedroom area, the upstairs has been remade by Sanger into a roomy artist’s studio. It’s divided into three stations—oils and acrylics, illustration, and pastels—for different aspects of her work. The favorite part of her studio isn’t glamorous, but serves Sanger well. “I put in a slop sink,” she says, “which is the best thing ever for an artist to have in their studio.

A Haven from the Outside World

The lower level, connected to the floor above by a graceful, wood-and-steel spiral staircase, remains Sanger’s favorite part of the house. “I love the open-plan layout, the ways I’m able to arrange the furniture to define the different sections,” she says. “A lot of the people in fashion eventually move into [doing] interior design, and through the gallery I also work as a consultant to interior designers when they’re looking for art for clients.”

At one corner is a generous, updated kitchen area with a large counter and seating; opposite it is a lounge area with sleek, matching gray couches from Article.com and several items acquired from Uptown Kingston shops, such as the slate-topped Mid-Century coffee table from Exit 19 and, sitting atop it, the large stoneware bowl from Upstate Capital Market. Across the room, above the retro dining set, hangs a groovy late ’70s/early ’80s chandelier, picked up from Madame Fortuna in Narrowsburg. Much like the other parts of the artfully remade home, it has the feeling of somewhere you want to relax in and forget about the outside world—a feeling shared by its owner and her guests, wholeheartedly. 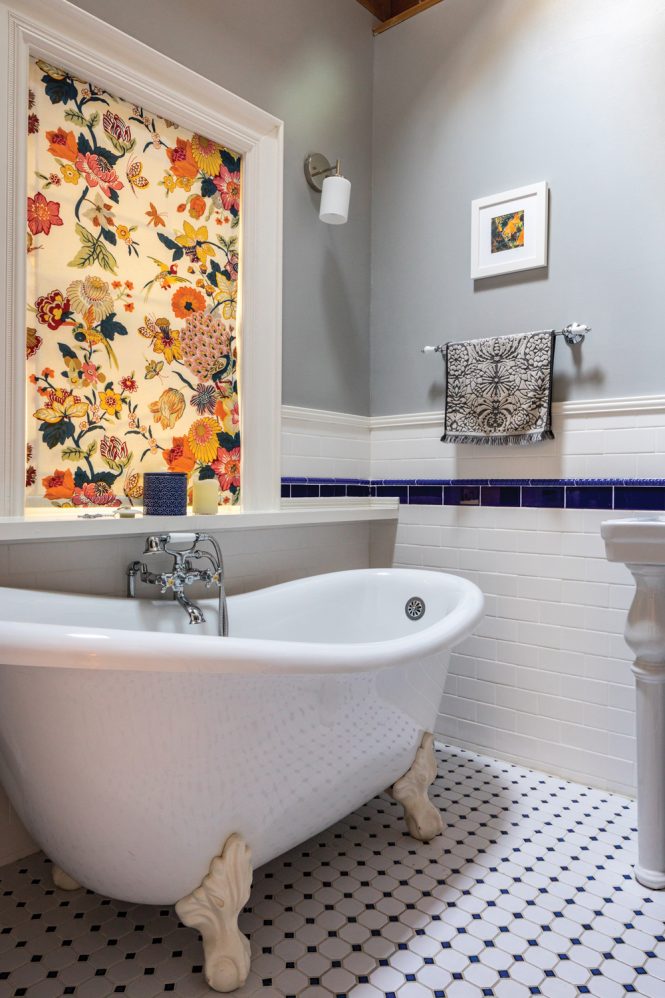 While Sanger changed many aspects of the house, she kept the bathroom as the previous owners left it. “It looks like an old French granny lived here,” she says. “It’s delightfully old-fashioned.” There’s a skylight over the bathtub perfect for stargazing according to Sanger.

“When I first bought the house, I think a lot of my New York friends sort of wondered if I was crazy for moving to the middle of the woods,” says Sanger, with a laugh. “But then they come to visit. They hear the owls and the coyotes at night and hang out on the deck or around the fire pit. And they just never want to leave.”