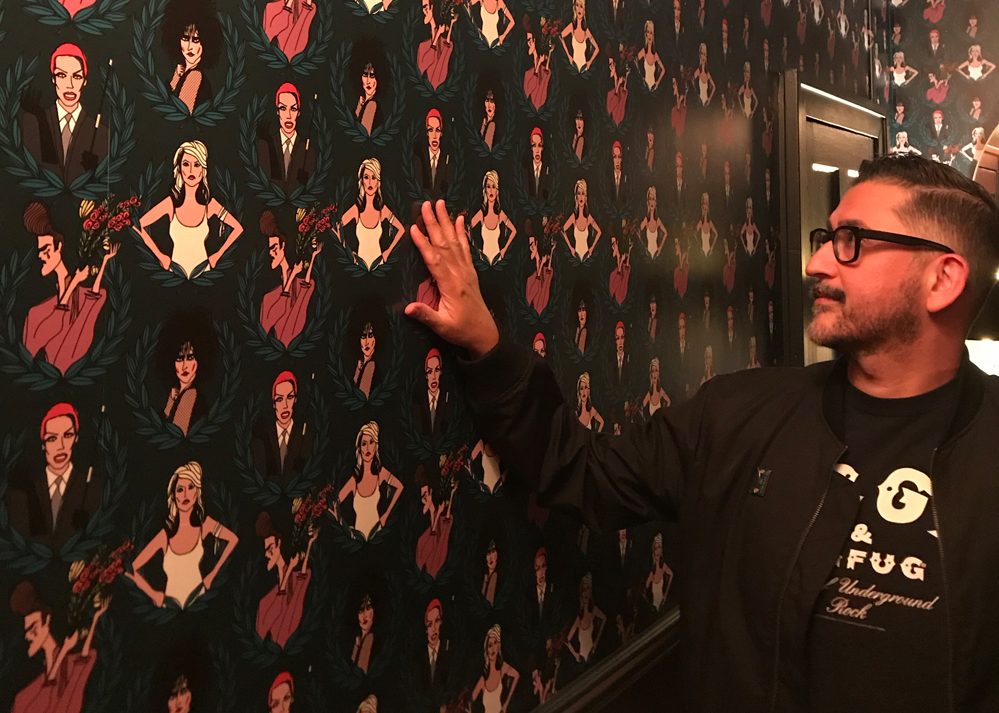 Wallpaper is an age-old tradition, dating back more than 2,000 years to the Qin dynasty in China. The decorative treatment has adorned homes in the US since the 18th century, an import from Europe. Be it a fancy toile, casual stripe, or earthy grasscloth, wallpaper can influence a room’s ambiance, introduce pattern, add color and texture, and, in the case of Jason O’Malley’s designs, personalize a space.

Chatting about the wallpaper he creates in his Kingston studio, O’Malley describes it as “one of a kind, humorous, and design-forward with a personal twist.” The colorful, off-the-wall patterns he conceives reflect his dauntless, cartoon-esque sketching style, as they readily tell the story of the people he illustrates. His wallpaper appears Victorian-themed from a distance, but up close, the surprise is the depiction of Madonna, Stevie Nicks, and different pop idols.

“I love to draw people,” O’Malley muses. “Especially figures from music, film, and pop culture that have influenced and entertained me over the years.” While he undoubtedly has a knack for sketching celebrities, O’Malley also spotlights everyday people and things, and will draw whatever his clients request. “I’m working on a toile pattern that features Kingston landmarks with a subtle little Easter egg incorporated into each vignette,” he says, noting that the hidden motif is their dog pooping. This commission has been a collaboration with the clients, who requested their pup in the pattern. “It’s perfect for the powder room where they will be installing it.”

Beyond wallpaper, you’ve probably come across his editorial illustrations at some point and not realized it. The New York Times, Lucky, and InStyle are a few credits to his name; not to mention a stockpile of high-profile clients such as Coca-Cola, Big Gay Ice Cream, and Chanel have printed his modern drawings of people, places, and pets.

Originally from the Detroit area, O’Malley became a full-timer in the Hudson Valley in 2007, after spending countless weekends away from New York City and his career in fashion and advertising. Ultimately, his creative background came in handy Upstate too—he says a design blog he started paved the way for his brand.

“The Rural Modernist was the name I came up with,” he says. “I thought it was funny that I found myself living up a mountain in the Catskills with my husband and dogs; terrified of nature; writing about Mid-Century Modern chairs and assorted design trends.” O’Malley claims the blog was a flop, but “Rural Modernist” stuck, as did his portfolio of recognizable work, a collection of graphics, illustrations, art, zines, ceramics, textiles, and, for the past few years, wallpaper.

Before he ventured into the world of wall covering, O’Malley experimented with personas through gift wrap design. “I had done some vaguely Victorian-flavored continuous repeat patterns incorporating portraits of my favorite ’80s alternative icons,” he explains. He highlighted music stars Morrissey, Debbie Harry of Blondie, Annie Lennox of the Eurythmics, and Siouxsie Sioux of Siouxsie and the Banshees. In these campy sketches, O’Malley accentuates his memories of the artists: Morrissey’s caricatured pompadour, Annie Lennox’s shocking orange hair and boardroom attire in the video for “Sweet Dreams,” Debbie Harry’s two-toned blonde mane and white armband on the cover of Parallel Lines, and Siouxsie’s spiky raven hair and Goth-meets-Egyptian makeup.

In 2018, when the Kingston Design House was about to make its debut, O’Malley sent a direct message on Instagram asking if he could participate. That’s when his wallpaper took off. “They asked if I could combine the four [‘80s icon] patterns into one design, match the paint color of the foyer, and turn it into wallpaper,” he says. And so his love affair with wall coverings ensued.

Since the showhouse, he’s gone on to collaborate with a list of clients and designers to create bespoke papers. Most customers commission him to draw patterns for powder rooms and accent walls. “My stuff lends itself to smaller spaces where you want to make a bold impression and do something personal,” he explains. When folks want to inject their own story into a room, he can create a design highlighting family members, pets, a theme, or a special location. 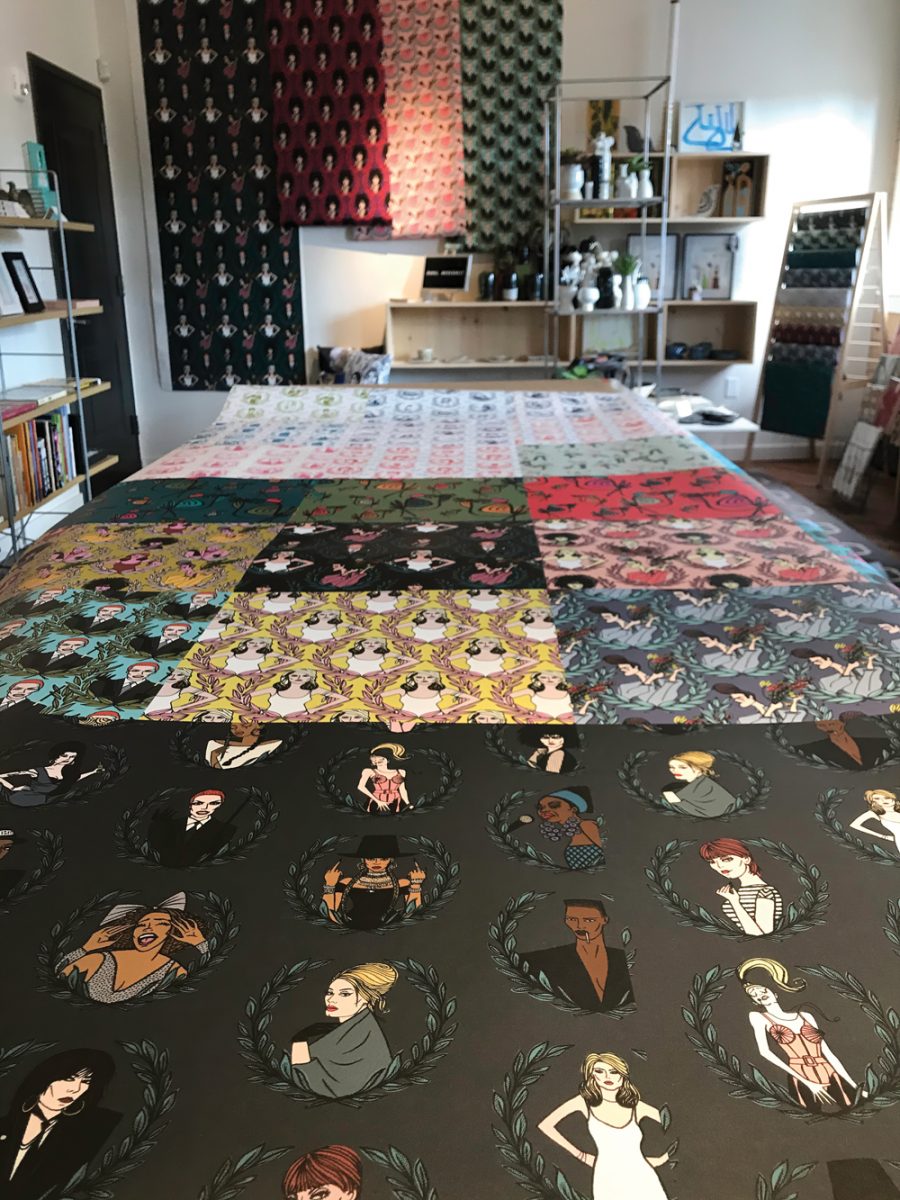 One of his dream projects to date is a Grey Gardens pattern highlighting Big Edie donning a floppy hat while holding a carton of ice cream, a head-wrapped Little Edie presenting an American flag, and a pair of mischievous raccoons eating Wonder Bread. The paper is installed in closets at the legendary Grey Gardens house in East Hampton. And recently he expanded a collection of musical personalities from a custom order, introducing “Mix n Match Divas.” Clients can select 16 out of 35 female rock, pop, soul, and new wave singers and a color for the background, then paper their walls with a personalized music-themed mural.

O’Malley approaches custom wallpaper the same as illustration, first discussing a concept with the client and submitting a black and white sketch to establish the elements and layout. He then creates a full-color digital version for approval, followed by a printed swatch so the client can adjust the design as needed. While most wallpaper orders include overage, O’Malley’s designs are printed to order and customers can purchase the exact amount for their space. Pricing varies depending on the complexity of the pattern and the amount needed, but plan on $500 and up as a design fee for the custom pattern, plus printing the paper, which ranges from $100 to $150 a roll, depending on the paper type. (O’Malley recommends a premium matte finish paper.)

While walls are not the limit of his artistic ambition—expect a collection of throw pillows in the future—if there’s one thing O’Malley feels good about, it’s looking at his work on a large scale. “I really like seeing my art on a wall compared to seeing it in a magazine,” he says. “Right now, wallpaper is the thing I’m most excited about.”