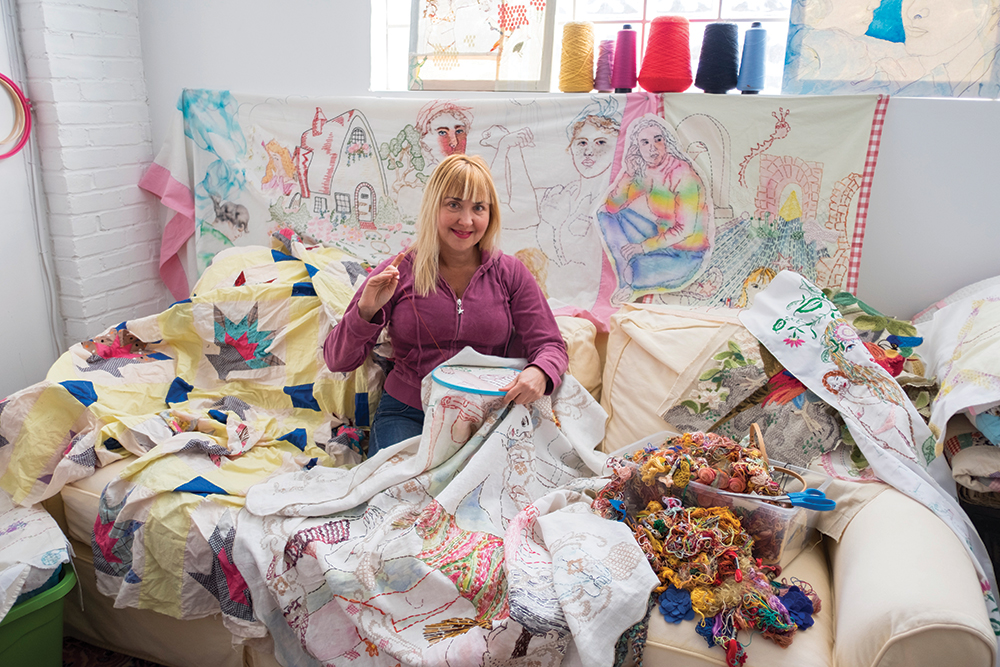 For fiber artist Orly Cogan, making art begins with finding “vintage pieces that a nameless woman or girl did hours and hours of work on, and passed down through families.” At her loft studio in Nelsonville, near Cold Spring, Cogan uses paint, embroidery, and appliqué to embellish antique tablecloths, dresser scarves, table runners, and bed sheets with a fantastical mix of gods, goddesses, Disney princesses, literary heroines, and feminist icons like Harriet Tubman, Ruth Bader Ginsburg, and Georgia politician Stacey Abrams. The end result is “the marriage of so many issues, the linking of past to present and craft to art,” she says. “Craft is sometimes considered lowly—‘women’s work’—with art a higher form. My pieces are a link to women craftspeople of the past”—and what she calls her “own brand of feminist fairytale.”

After studying painting at Cooper Union and Maryland Institute College of Art, Cogan, who was born in Israel and raised in Rockland County and Long Island, began experimenting with mixed-media collage. That led to her signature style—using hand-stitching and washes of color on fabric to examine women’s roles in culture, fiction, and history. She calls her work an “update” on female stereotypes and struggles. When a show of her work opened on the eve of the Brett Kavanaugh hearings, Cogan quickly stitched images of Christine Blasey Ford into one of her works. Her often sensual ensembles include heroines like Alice in Wonderland and Cinderella as well as portraits of herself and friends and family. 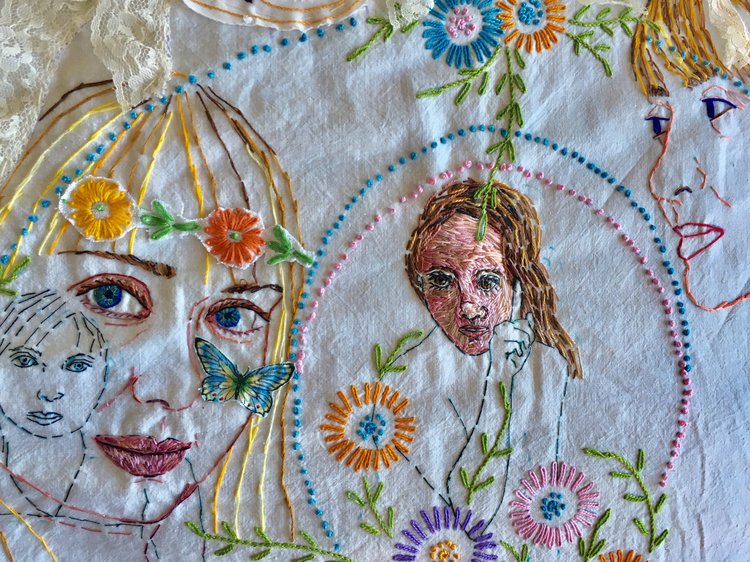 Cogan grew up in a home filled with contemporary art. Her mother collects outsider and folk art, especially quilts and samplers. (“She liked ones with a moral lesson, like ‘Spare the rod, spoil the child,’” she notes.) Her mother, who Cogan says “has a great eye,” sources linens at antique stores and flea markets for her to reimagine.

Although Cogan sees her work as a collaboration and dialogue with the vintage linens’ original makers, she also addresses women of the future. Her recent show at the Brattleboro Museum and Art Center in Vermont, “Don’t Call Me Princess,” was inspired by a frequent compliment paid to her daughter, Viva Coganmann, age nine. Strangers often call young girls “princess.” It’s meant nicely, Cogan says, “but as she grew older, she rejected it.” The show featured “more monumental pieces,” she says, “big and complicated, overlapping and layering political points of view, with a lot of female portraits in it—RBG, Anita Hill, Alice Neel.” Cogan wanted to show that women are leaders, too. “So many of those early scenes we grew up with in fairytales are pitting women against women, like the queen asking her mirror who’s the fairest of them all,” she explains, “showing them as being beautiful and passive. Or they’re ageist, like Rapunzel [who was kidnapped by old Mother Gothel and made to grow her magic hair long to keep the hag from aging].” That’s one reason Cogan rewrites fables in an “unladylike” way. “Parenting is so hard now with a bully ruling our country,” she says. “I keep telling [Viva] that we’re not far behind the other countries that have had women leaders.”

Cogan’s influences include the feminist artists Alice Neel, a renowned expressionist, and Jenny Saville, famous for her voluminous female nudes, along with outsider artist Henry Darger, who created a fantasy world inhabited by naked girls. As such, her studio is filled with piles of vintage fabrics and antique books of erotica, art history, and anatomical illustrations. A child-sized store mannequin stands in a corner. Cogan doesn’t use a sewing machine, but has worked with textiles since childhood at a Waldorf school. “We learned to finger-knit in first grade and do crochet,” she says. She taught herself to sew and embroider. 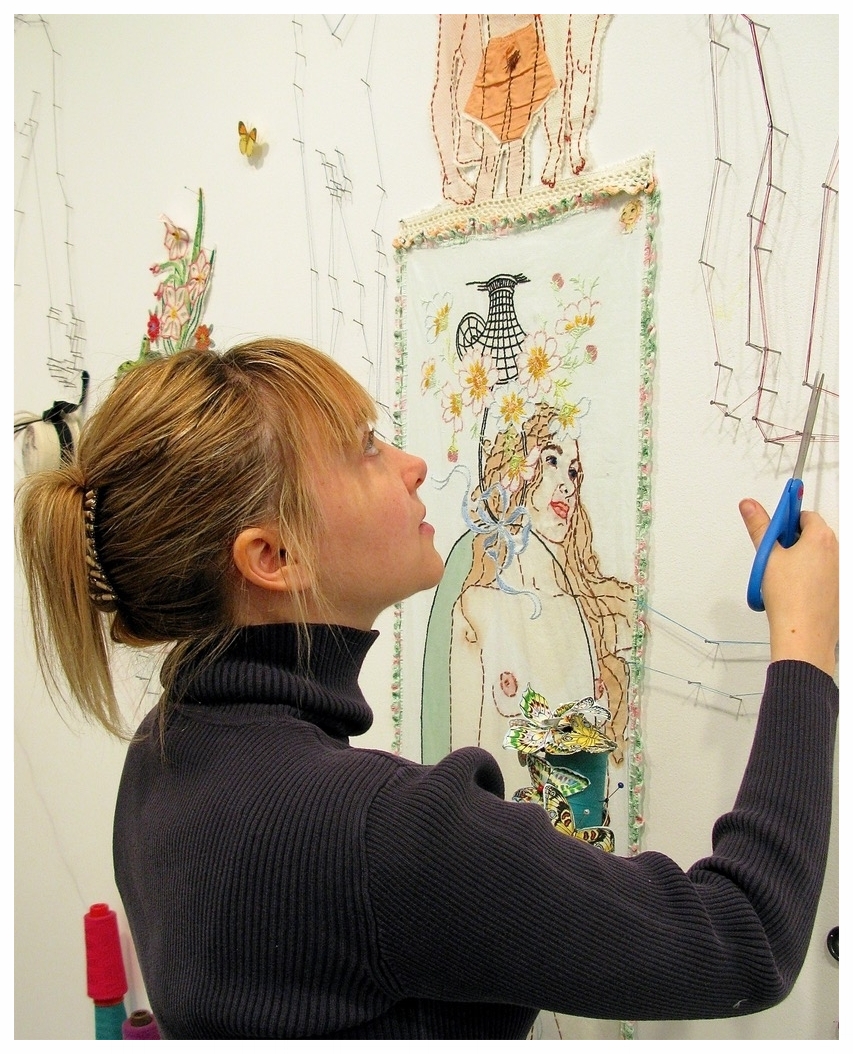 In 2014, Cogan moved from New York City to Cold Spring with her husband, Robert Mann, owner of the eponymous Chelsea photography gallery, who grew up summering in Putnam Valley. “It’s such a different lifestyle,” she admits, though she enjoys having a “big, beautiful studio” with room to spread out, and the convenience of visiting the city via train.

Cogan continues to pull thread, linking history to the future, weaving stories and accepting commissions for portraits of both people and animals. “To me, it’s not about the technique of sewing; it’s more about what I’m saying,” she says. “It’s about bringing back the handwork, when we live in such a digital world.”