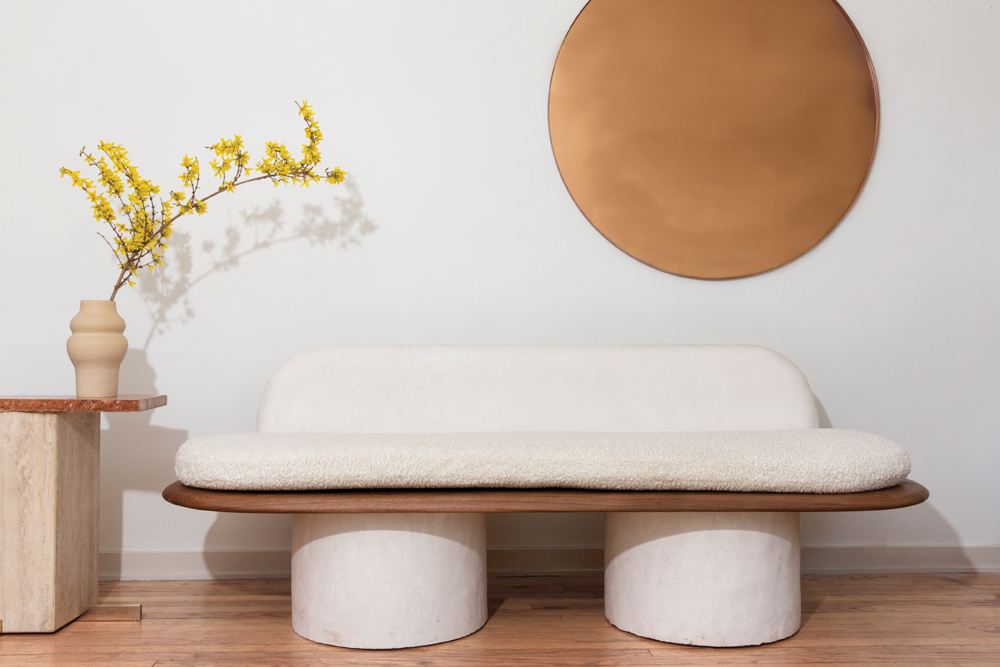 For Brett Miller, furniture design is primarily an intuitive process. “I don’t try to get too complicated,” says Miller, describing his approach at Jack Rabbit Studio. “I try to make things that feel good and look good and are interesting to me, and hopefully they’re interesting to other people, too.”

Miller’s feel-first approach is likely informed by the spontaneous way he arrived in the field. “I got into furniture design through trial and error,” he says. Originally migrating to the Hudson Valley to farm, Miller eventually moved into metal fabrication, and finally into furniture making. In 2017, he opened his own studio, making the project full-time the following year. 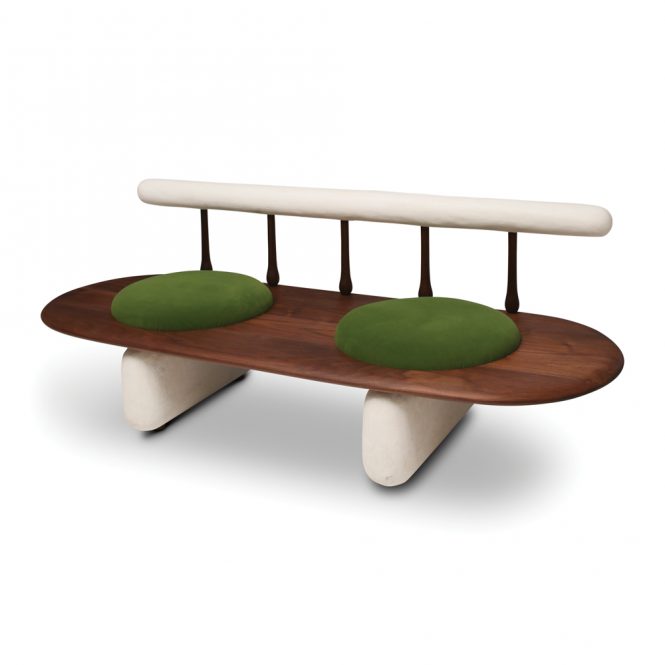 The Bolo Settee, made with mohair cushions, locally sourced black walnut, and studio-made lime plaster with stones from a Catskill limestone quarry. Photo by Love House

His striking designs are easily recognizable: His furniture is often described as “chubby,” and the chairs, benches, tables, and other pieces he makes have a round, bubbly, almost cartoon-like quality. Miller emphasizes that this bold style is not the product of profound artistic conception; rather, it represents a natural evolution for him as a designer. “My initial inspiration for the round [pieces] was just the tools I had when I started,” he says. “One of my first tools was a lathe, and so I started turning round cylinders out of six-by-six pine lumber that was lying around, to experiment with. I just thought it was cool—I didn’t have any real plan. It just kind of happened.”

While Miller primarily uses wood in his furniture, he has recently begun experimenting with lime plaster, lending pieces a Mediterranean quality. He creates the material from scratch, sourcing the limestone from a quarry in Catskill. “It’s a really cool process,” he says. “You cook [the limestone] to a certain temperature, then add water, spin it, and it undergoes a chemical reaction and forms lime putty. And then it can be mixed with sand and used as plaster.” 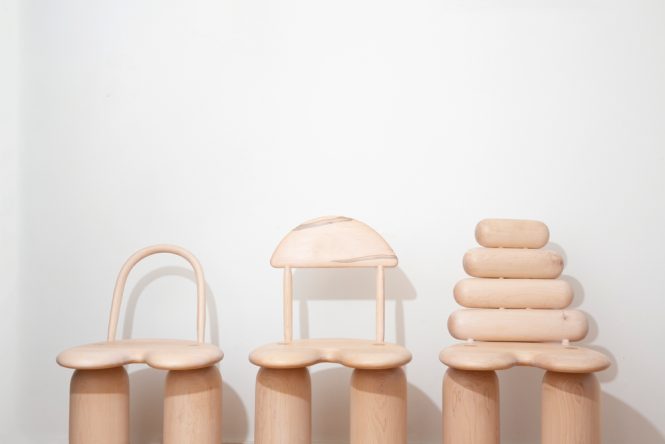 While lime plaster is sometimes used in furniture and sculpture, it is more common in larger structures. “I was interested in it from an architectural standpoint,” says Miller. “Growing up in Southern California, [thinking about] Spanish- style architecture with stucco and terra cotta and exposed beams and things like that, I started wanting to play with [those elements] a little bit.”

As with all aspects of his approach, this use of unconventional shapes and materials has necessitated experimentation.

“There’s a reason why traditional woodworking has existed for so long—because it works,” he says. “There’s a reason they didn’t make super funky shapes and weird, rounded, wavy objects out of solid wood, because wood doesn’t lend itself to that. I’ve been having to figure that out, seeing what works and what doesn’t.” 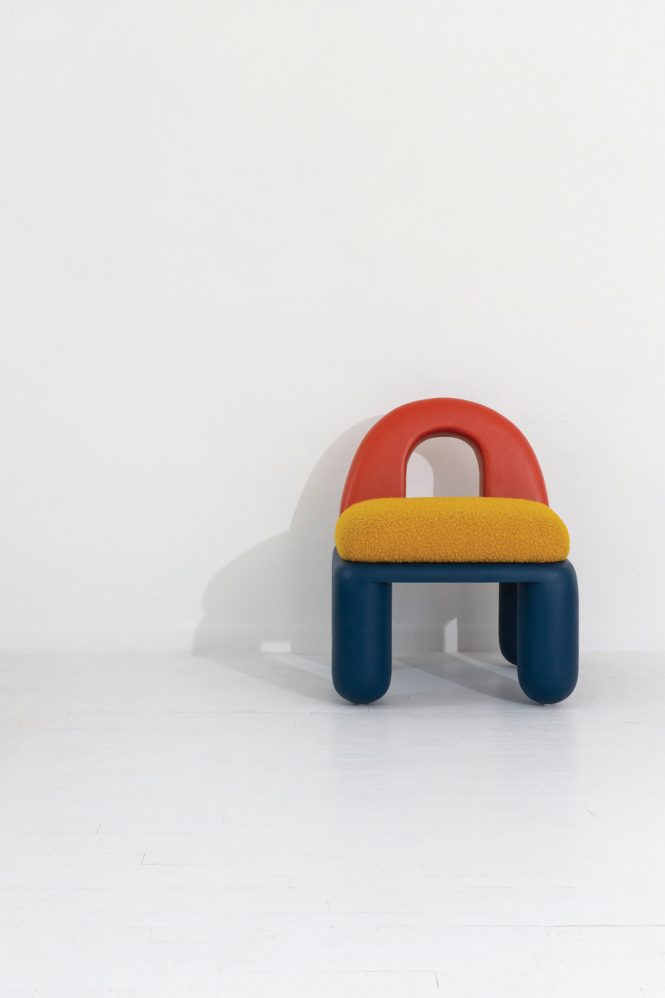 Miller is grateful for the attention Jack Rabbit Studio has attracted in recent years. In 2018, he was picked up by digital design magazine Sight Unseen and included in their American Design Hot List, which he says provided a major boost to his business. In the years since, he has sold furniture to both commercial clients—including Google’s new Chicago office, and a since-shuttered design cafe in Brooklyn called Relationships— and to homeowners, largely through Love House, a design showroom in Greenwich Village.

While his furniture is not currently on display in the Hudson Valley, he hopes to change that soon—and for now, invites interested locals to visit him at his studio in the Greene County hamlet of Leeds. He describes how the creative energy of the region has been integral for his development as a designer. “My whole journey into the Hudson Valley and into the furniture world has been one happy, lucky streak,” he says. “Obviously, there are tons of incredibly talented designers and artists in the Hudson Valley, and so  when I started meeting people it was like a light bulb went off. I thought: This is what I want to do, this is what I’m meant to do, this is what I should’ve been doing all along, these are my people—I feel rooted to the Hudson Valley.” 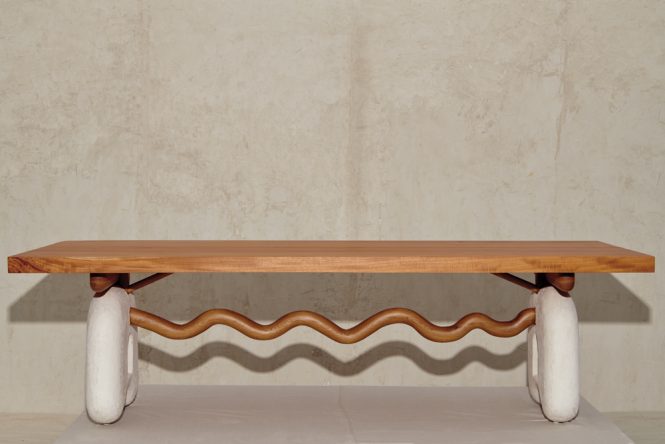 As he continues to develop new designs, an element of spontaneity persistently informs the process and path. “The statement on my Instagram profile is ‘Don’t overthink it,’” says Miller. “For me, it all goes back to feel and intuition. How does an object make you feel? Because ultimately, I think everyone wants to feel good in their space, with the things that they have and surround themselves with. For me it’s more of an emotional concept, I guess.”

“That’s the playful attitude I try to bring to my work, re- thinking what furniture is, what it looks like, and how it feels.” 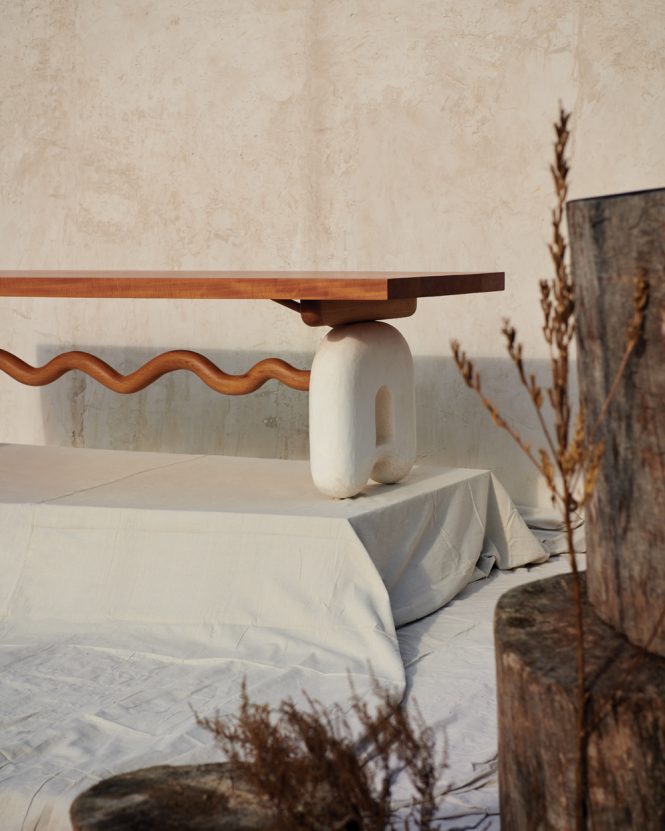