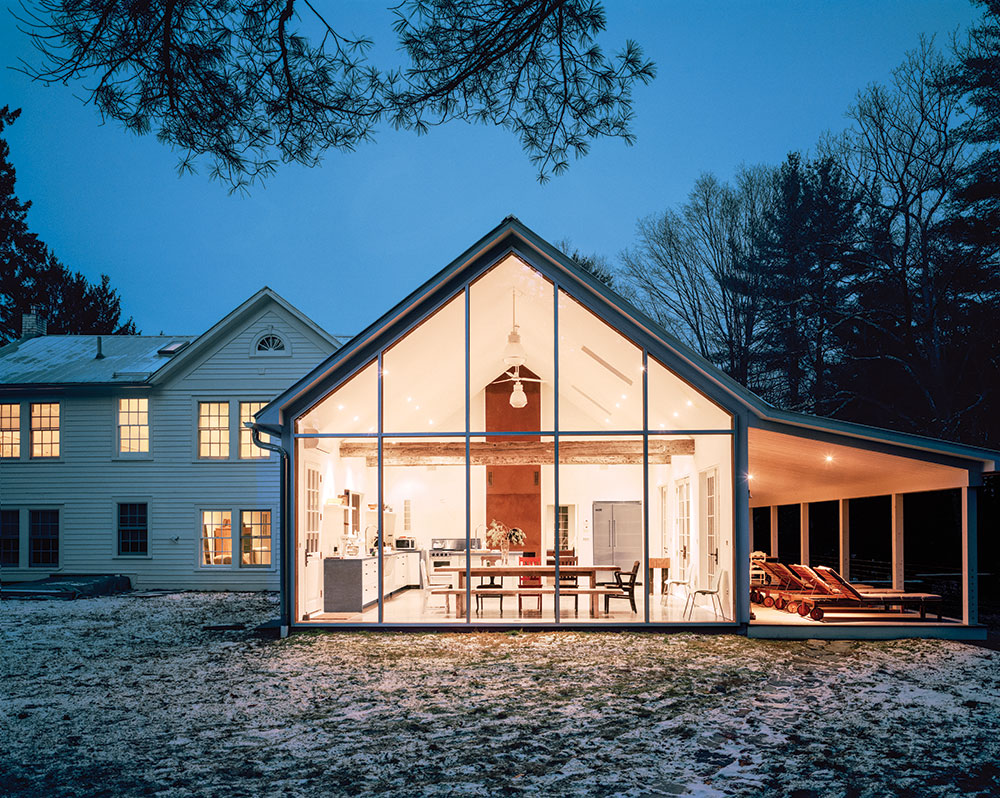 Take a few short steps from the great room into the kitchen of the Floating Farmhouse, a ca. 1820 home-cum-vacation rental in the Sullivan County hamlet of Eldred, and you might find yourself wondering which room you’re in. Straight ahead is a full wall of floor-to-ceiling windows that floods the airy chamber with sunlight and frames its breathtaking views of the property’s lush, secluded grounds. A pair of massive, weathered, wooden beams bisects the space overhead. On the left, a line of French doors opens onto the piéce de résistance: a cantilevered deck that seems to miraculously float above the creek that rushes behind the house—hence the building’s name. And on the right, a tall, rustic-finished pizza oven towers the entire 18 vertical feet of the cathedral-pitched wall.

“I kept the traditional small doorway [from the great room into the kitchen] for the dramatic effect,” says owner/designer Tom Givone. “That’s definitely the big ‘Whoa!’ moment, walking into that room.”

But that’s not to say there aren’t more such moments to be found throughout the rest of the house, which embodies Givone’s bold penchant for blending original architectural charm with sparse, modern chic. Upstairs, two more rustic, hand-hewn beams (from the same antique Pennsylvania barn that provided the ones in the kitchen) soar along the ceiling of the master bedroom, which boasts a wood-burning fireplace and a private bath with an 18th-century marble sink and a walnut-trimmed soaking tub sourced from a Manhattan tenement and retrofitted with a stainless-steel surround.

Four additional bedrooms feature original wavy-glass windows, antique beds, and other vintage furnishings. Off the kitchen, another fireplace heats the sprawling-but-cozy great room, whose wide-plank floorboards are also found throughout the original structure.

Givone is a New York City-based copywriter-turned-architectural-entrepreneur with a flair for refinishing country farmhouses (five so far) whose work has been featured in Dwell and Architectural Digest. He acquired the then-dilapidated Eldred house in 2007 and replaced its tiny, falling-down, lean-to kitchen and mudroom with a 22-foot-by-22-foot one-room addition. Extending the living space to intersect with the creek via the covered deck was inspired by Givone’s desire to bond with the building’s surroundings.

“The combination of the skyscraper-like glass wall and the deck is the one-two punch,” he explains. “The place was originally a mill as well as a farmhouse, and there’s a waterfall and a hand-built dam right back there on the creek. When you’re in the kitchen or on the deck, it almost feels like you’re on a houseboat.”

Stay, inspired by a soaring lattice wall of skyscraper glass framing views of the water, apple trees, and barn. ⠀⠀⠀⠀⠀⠀⠀⠀⠀ 📷 @mahaney_mark

Through the ample windows, diners at the lengthy wooden table can take in views of the on-premises gazebo, apple trees, and barns. The space is high heaven for culinarily inclined guests as well, thanks to its 48-inch commercial range, dual convection ovens, multiple sinks, and, soaring above all, the pizza oven, whose rough, acid-washed façade took Givone an entire summer to create.

“To me, the experience of being here is a way to commune with nature and whoever you’re with,” says Givone. The site, which tends to be booked three months in advance, is popular for group getaways, weddings, photo shoots, and corporate retreats. “In the kitchen, it’s great to just enjoy a drink and listen to the creek rush by or watch the snow come down or the deer wander through,” he says. “‘Serene’ is definitely the word.”