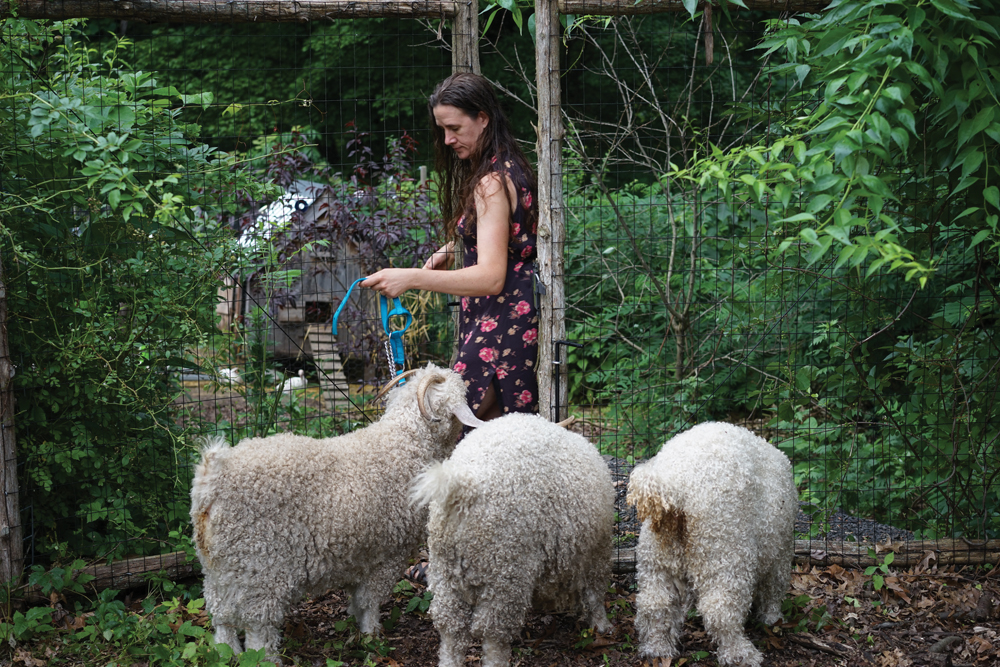 For most women, working a full-time job, raising kids, and managing a household means more than a full plate. But for Kathy Puffer, being a teacher, wife, and mother is only part of the story. She also runs an ambitious 1.75-acre microfarm on her family’s property in Tillson.

Puffer, who’s a speech pathologist at the Arc of Ulster-Greene, a nonprofit developmental disabilities agency, and her husband Ed, a computer programmer at IBM in Poughkeepsie, bought the property in 2009. Their eldest daughter, Abigail, was two, and Puffer was pregnant with their second daughter, Meredith. They moved to the 2004 saltbox cape in Tillson from a condominium in Highland, looking for extra space and a chance to try homesteading. “We were going to be able to grow our own food and raise animals that were appropriate for our region and our scale,” she says. 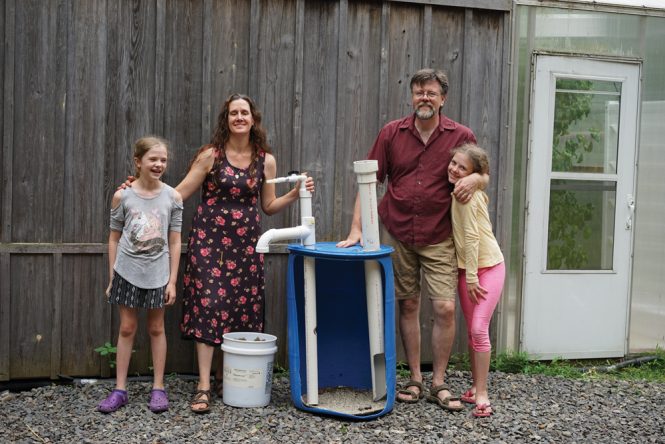 Having grown up on a small farm in Florida and studied indigenous agriculture in southern Mexico during college, Puffer wanted to begin farming in hopes of alleviating Abigail’s autism diagnosis and both daughters’ food allergies. “As a mother, I was just trying to get through, week by week,” she says, “just trying to survive.”

But the property proved to be a poor candidate for Puffer’s agricultural aspirations. When her newly planted fruit trees started dying off, she knew the soil needed remediation. “It was very disappointing to realize that we had sand and shale, basically throughout the entire property,” she says. “It was heartbreaking to discover that.” 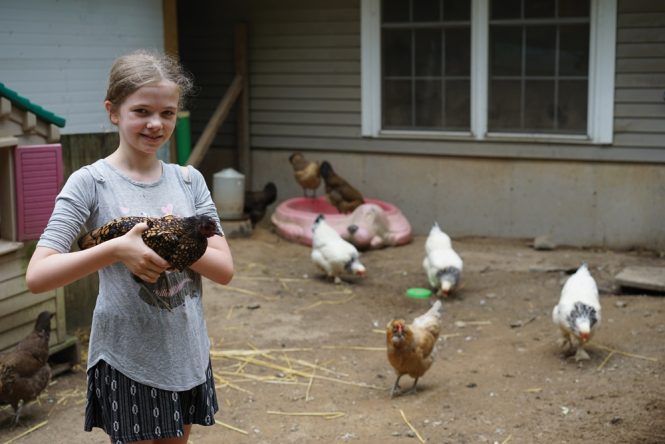 Meredith holds one of the family’s hens.

Soil restoration is a lengthy process, so Puffer researched alternative sustainable and economical agricultural methods, and discovered vertical farming. The method frees growers from the customary requirements of fertile land and warm weather through the use of indoor towers, where plants grow vertically and aeroponically (without soil or an aggregate medium), using minimal water.

Puffer’s 136-square-foot aeroponic greenhouse, built in 2015 with assistance from a Pennsylvania-based Amish designer, contains 10 towers boasting over 1,000 plants, grown using seeds from the Hudson Valley Seed Library, including lettuce, bok choy, Swiss chard, kale, herbs, and parsley, plus basil that’s sold wholesale to area restaurants. Puffer incorporated the venture as Hudson Valley Vertical Farms in 2013, and once the greenhouse was installed, she established a small community-supported agriculture program to recoup the cost. The CSA is thriving, with pickup at RosenSpace, a community center in nearby Rosendale. 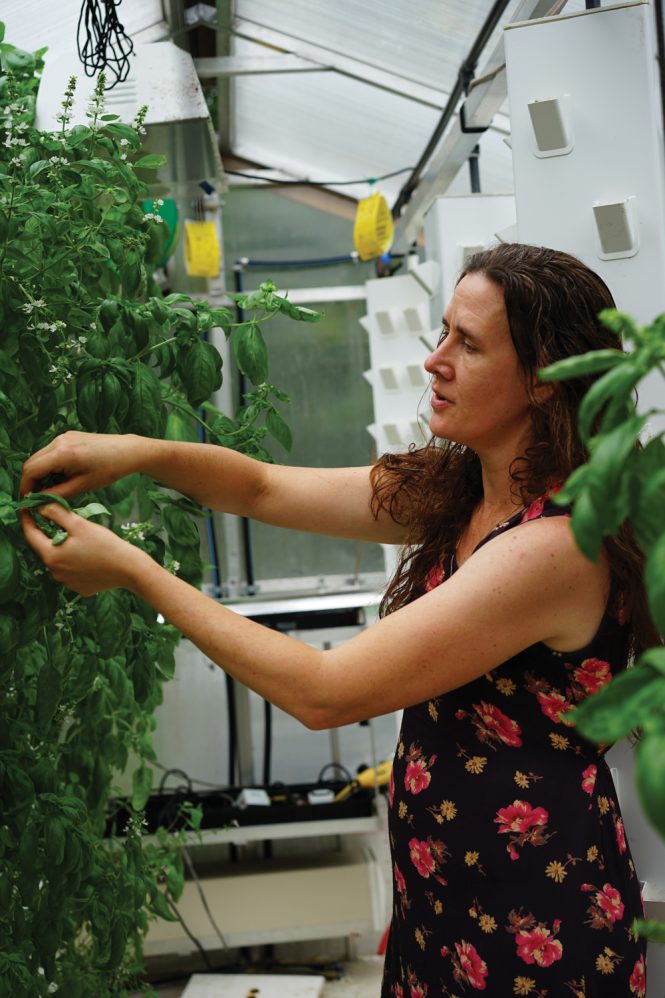 The property has grown into Puffer’s “homestead ecosystem,” and has become her greatest passion. At the Omega Institute, Boswyck Farms in Queens, and Holistic Management International, she has trained in hydroponic aeroponic growing; holistic farm and ranch management; and permaculture, a field focused on self-sustaining agricultural systems that harmoniously blend with their natural surroundings. In the process, Puffer’s mission has expanded from caring for her own family to educating the public on microfarming.

As the microfarm evolves, her family is at her side. Ed, a self-described “heavy lifter,” contributes elbow grease and cheerleading, says Puffer, and Abigail and Meredith “help with all the farm chores.” 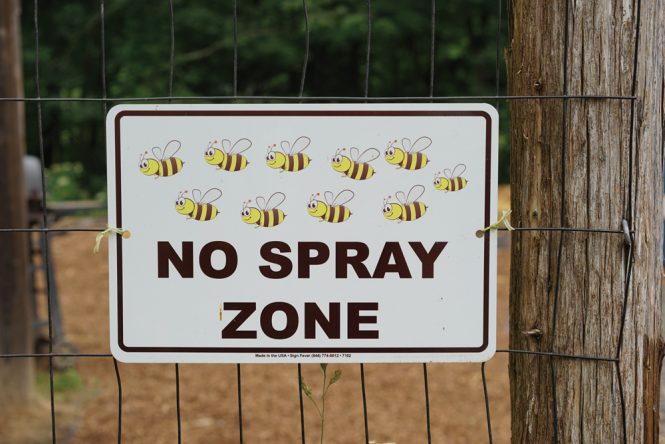 The Puffers’ menagerie’s members pull their own weight, too. The animals’ composted manure is replenishing the soil. “Having animals, with the straw and the manure, is really important for building up that compost and soil restoration,” Puffer says. Three angora goats graze the property’s poison ivy; Puffer spins their fiber—along with those of two angora rabbits—into raw fleece, sold online. Free-range eggs are also sold online, and the Puffers dine on home-raised chickens, or “meat birds.” Two beehives, supported by pollinator flowers, produce honey for Puffer to barter for beef.

The once-sandy soil has been amended so successfully that it’s allowed Puffer to begin growing on the land. The family’s personal “food forest,” planted with seedlings in 2014, is packed with elderberries, currants, gooseberries, apricots, pears, plums, raspberries, bush cherries, and sap-producing sugar maples. “It’s a privilege to be able to offer that to our family and to have such abundance,” Puffer says. 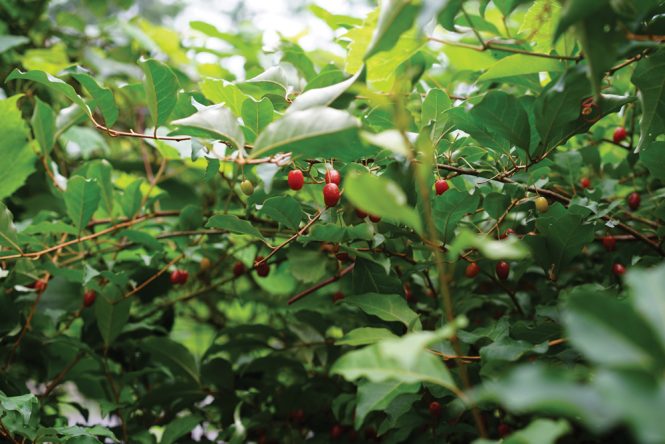 Puffer was an immediate convert to biodigesters, and feels that the system is what makes her microfarm flourish. In 2014, Dr. Culhane installed a biodigestor system in the Puffers’ home—it is both the first basement biodigester system in the US and the first ever to receive food scraps directly from a kitchen garbage disposal unit. The installation, which required only two large tanks and some basic plumbing supplies, costing about $800, provides enough methane gas fuel to power the Puffers’ two-burner gas stove and outdoor grill. 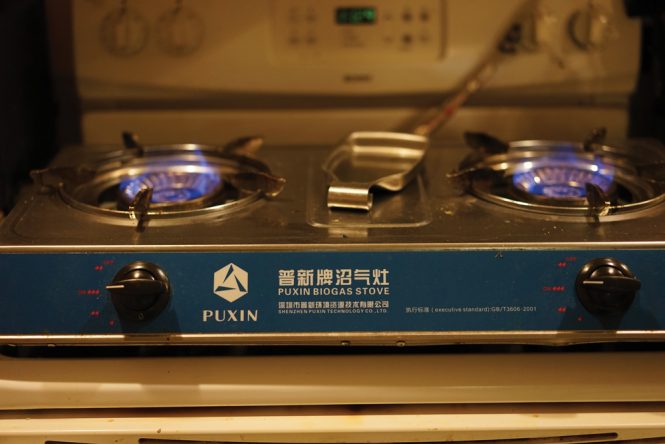 “The joy it brings me, seeing that blue flame on my stove—that this is true renewable energy—I just want to share that with as many people as I can,” Puffer says. She and Dr. Culhane, together with other associates, cofounded the nonprofit Solar CITIES with the mission of educating the public on biodigester technology and supporting users around the world. “It’s so important to be doing what you’re teaching,” she says. Puffer has shared biodigester and homesteading knowledge via workshops locally and in New York City, Haiti, Colombia, and Belize. The microfarm serves as a biogas education hub and local workshop venue; Puffer also sells startup biodigester and aeroponic equipment. At RosenSpace, she runs winter courses on topics like soap-making and beekeeping.

“What we try to show everybody is that you can do this at the home level, at the homestead level,” she says. “It’s really not that hard. Once you get started, it pretty much manages itself.” Puffer’s experience has also shown her that regardless of the type or size of land, agricultural pursuits are within everyone’s reach. “You don’t have to build from scratch,” she explains. “You can refit a previously existing home.” 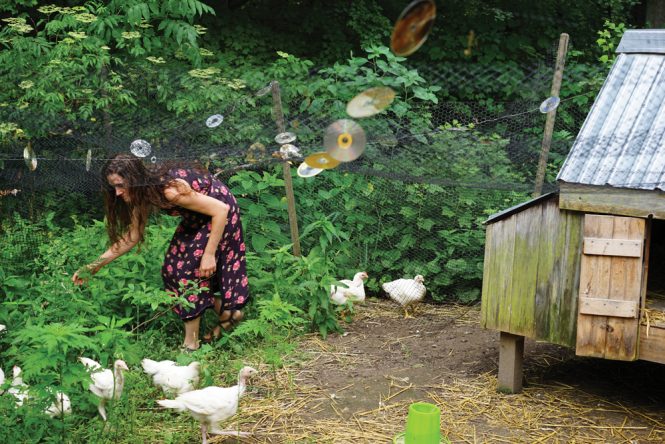 Ten years after she first despaired about those first fruit trees she planted dying off in sandy soil, Puffer turns out an impressive production yield. As for her daughters? “Their food allergies have disappeared.” Abigail’s autism has also improved, which Puffer credits not just to the food, but also to her connection with the farm animals.

“I can share what I’ve learned with other people so other women don’t have to go through what I went through,” she says. “I had an idea and a dream and I kind of jumped in before I knew what I was doing. I have been literally learning as I go. I’ve had lot of fun. It’s something people shouldn’t be afraid of jumping in and trying, even if you do make mistakes.”