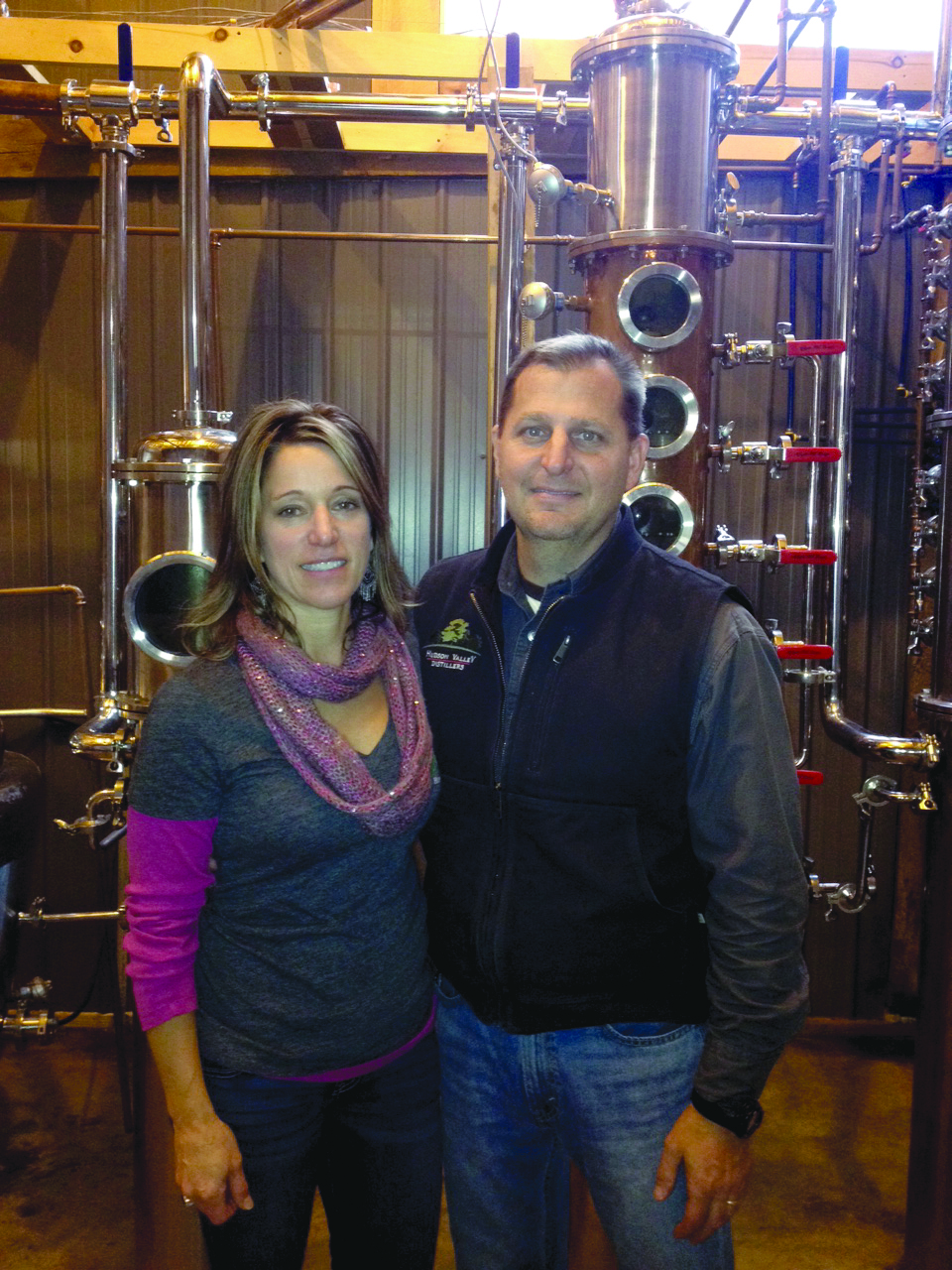 I’ve never been a fan of aimless driving, but lately it’s become appealing to spontaneously get into the car and roam the Hudson Valley countryside to see what can be found. As I write, it’s the midpoint of the fall season, and if this coming winter is anywhere nearly as frigid and snowy as the last two, I may not be heading out much for the next few months, so it’s great to make the most of the clean roads and clear skies while they last. But there’s also an ever growing list of places to go.

Case in point: Spirit Grove Farm in Clermont, also known as Hudson Valley Distillers, LLC. I stopped in for the first time on Sunday afternoon over Halloween weekend. Though the sun was shining like it was July, the air was cool and crisp, and the nearly bare trees looked suitably spooky. That atmosphere made the idea of a distillery tour and an artisanal cocktail all the more alluring. So did meeting Chris Moyer, and his wife, Jennifer, who co-own the distillery with their longtime friends, Tom and Jennifer Yozzo.

As Chris tells it, he and Tom met in 1990 as fraternity brothers at Bloomsburg University. After college, Tom returned to his hometown of Newburgh and became a law enforcement officer, while Chris went into software channel sales management, eventually working for a large company in northern Virginia. The two remained close friends, vacationing together with their wives and growing families, and continually finding themselves “sitting around the campfire,” says Jennifer, “talking about what we were going to do when we grew up.” What usually came up was the vision of a distillery that would resemble the wineries in northern Virginia. “You can bring a blanket and your kids and your dog, buy a bottle or a glass, listen to music, and hang out,” says Chris. “That was our vision, but with spirits.”

Then, in 2007, New York State’s Farm Distillery Act was signed, making it possible for farm distilleries to become viable businesses, and setting the Moyers and the Yozzos off on a new life path together. In late 2012, after Tom retired from Newburgh’s police force after 20 years, the two couples bought a former nursery and small orchard on the west side of Route 9 between Red Hook and Germantown. After renovating the barn to hold the still and kegs and a tasting room, Spirits Grove opened in March 2014. In late 2014, the state’s Craft Beverage Act was a “huge boon to our business,” says Chris, “because it allowed us to sell our spirits by the glass, whereas previously we could only offer 3.25-oz. samplings.” An outbuilding was converted into a cocktail space with a stone patio outside, where Spirits Grove began hosting events last fall.

The property has brought some happy discoveries, like a crop of staghorn juniper, which is used to flavor the gin, and some baffling situations, like groundhogs overrunning the messy orchard. “None of us are farmers by any means, but we’re dealing with it and this year we actually got some fruit,” says Chris. But the startup has also brought the Moyers and Yozzos even closer. Along with meeting the business’s challenges, they juggle their four children, ages 11 to 13, between them. “Someone’s always handing off the baton,” says Jennifer.

Less than two years after its opening, Spirit Grove has gone further than the Farm Distillery Act’s requirement for using at least 70 percent New York State raw ingredients by sourcing 100 percent of its materials from a 100-mile radius. The distillery makes two applejacks, gin, vodka, and whiskey, as well as apple cider (and hosts family-friendly make-your-own events), ginger beer, ginger candy garnishes, and all of its own syrups and flavorings. And, judging from my sampling of the cocktails Pear Passion and Not Your Average Appletini, Spirit Grove’s seasonally-inspired drinks are sublime. I’ll be heading back to try out the hot toddies during the holidays for sure.

With Sloop Brewery Company, From the Ground Brewery, Suarez Family Brewery, Clermont Vineyards and Winery, and Tousey Winery all within a five-mile radius, says Jennifer Moyer, “We’re already practically a trail, and we refer our customers to each other and help each other out.”

But even more importantly, Spirit Grove epitomizes the sense of optimism that’s overtaking the Hudson Valley and turning Sunday drives into adventures. “Daddy didn’t give us a farm,” says Jennifer. “We left our lives behind and followed a dream. This is all handbuilt. People say, ‘Wow, you really pulled the trigger, and it didn’t cost you millions.’ And they think, ‘If they can do it, I can do it.’”