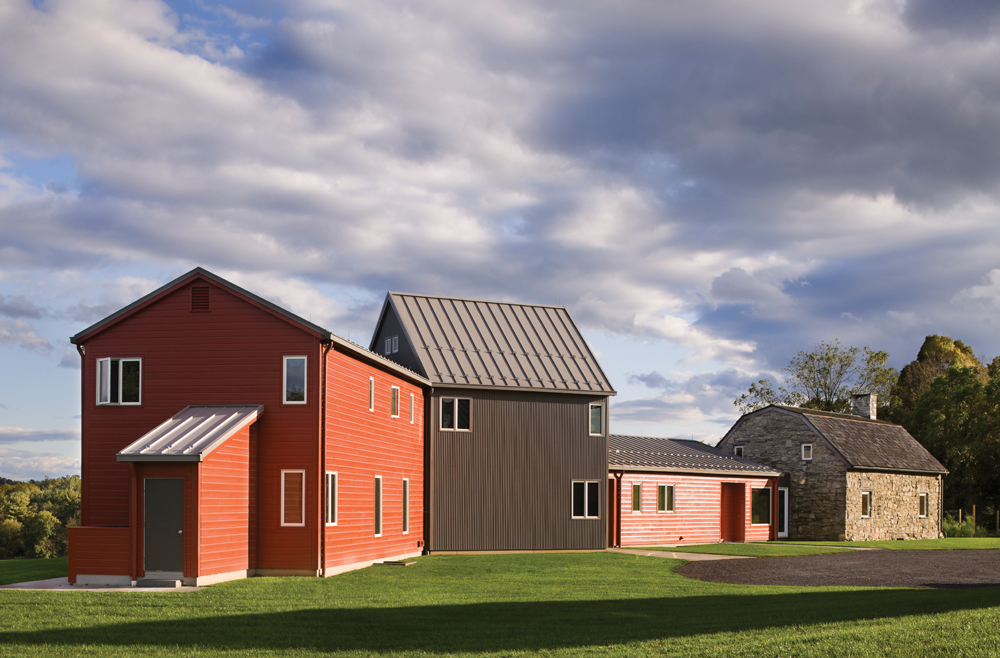 When the owners of a Dutch Colonial fieldstone farmhouse in Catskill were ready to renovate, they first considered a conventional arrangement of additions. They wondered if the best option was to surround their 1761 house with extensions, but architect Alexander Gorlin had a better idea. He did not center his extension plans on the farmhouse, but instead added living space in a way that let the farmhouse take center stage. He designed a row of interconnected structures to frame the ridge of the hill on which the house stood, with the oldest structure as the starting point.

“Originally, they were thinking of having it in the center and doing wings on either side and I said that would diminish the existing house, because the additions would overshadow it,” says Gorlin. “I suggested that it be designed more like a train with additions on a caboose. It was meant to be like a little village of barns.” 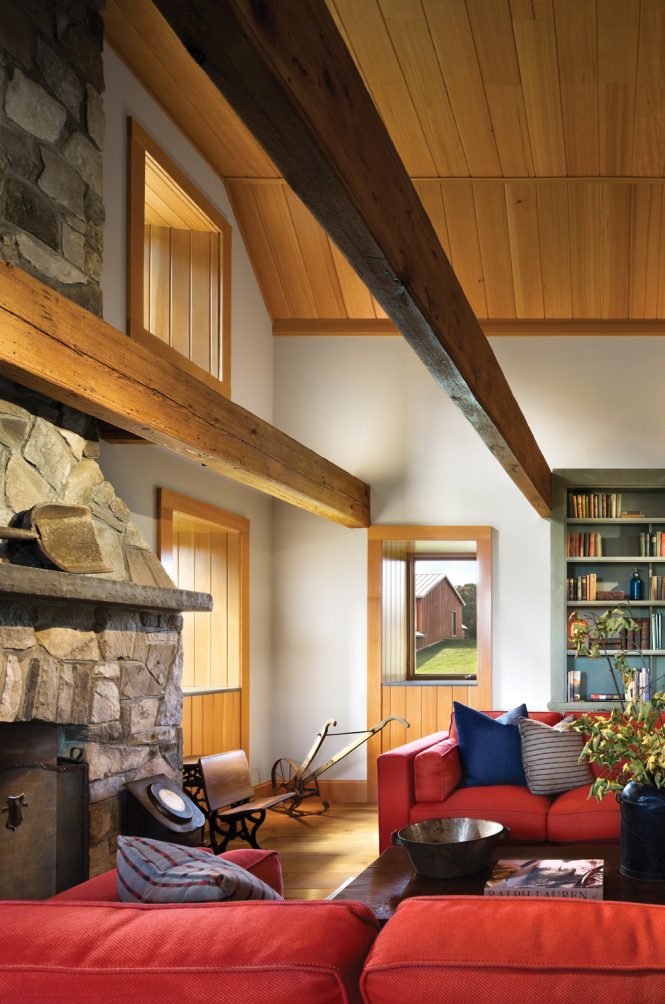 The original structure was transformed into the main living space. The low ceiling was removed to reveal original beams. Alexander Gorlin Architects

The architect likes to joke that the design was inspired by Amtrak, because he took Amtrak north from his New York City-based office to view the Catskill property, but it was really the landscape that ultimately dictated his choice of design. The architectural concept of spaces strung together in a linear fashion makes the most of the home’s stunning mountain and river views. The house overlooks a valley Gorlin describes as “quite extraordinary.” “It just spills out and the valley is at a slight angle, so it creates a slightly forced perspective, all framed by the Catskills on either side,” says Gorlin. “And Olana is in the distance. It’s really quite dramatic.”

A Community of Spaces

Each segment of the expanded home features a different profile. The original farmhouse is a tall, boxy, single story, but then the adjacent kitchen/dining addition is shorter. The next linked structure is the tallest, then the final rectangular building is again shorter. Varying heights, angles and shapes make the additions seem more like a rural village, a community of spaces rather than a single home, yet ironically the variety refocuses the eye on the dimensions and textures of the original 1,500-square-foot farmhouse. 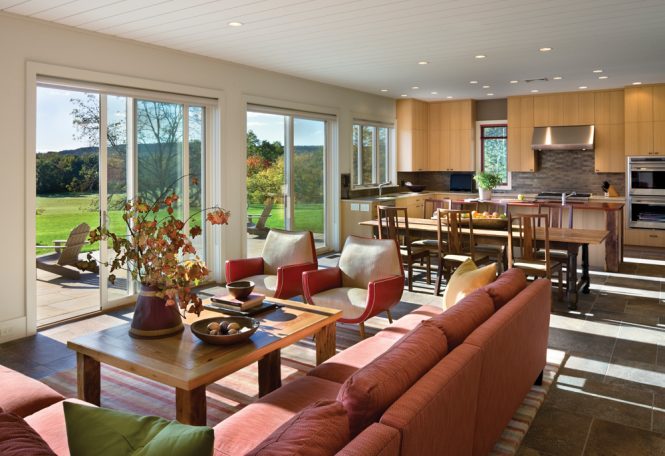 The first pavilion connected to the stone house serves as the kitchen and family room. Sliding glass double doors open on to the patio with expansive views of the Hudson Valley. Alexander Gorlin Architects

As with so many 17th- and 18th-century upstate homes, the farmhouse was cobbled together using the Hudson Valley’s ubiquitous fieldstone. Yet that distinctive exterior was once obscured by less attractive renovations. “When we found it, the house was totally encrusted with vinyl siding,” says Gorlin.

When it came to choosing exteriors for the extensions, variety was key, but the materials needed to harmonize and suit the environment. Rather than duplicate the fieldstone exterior, Gorlin referenced other buildings on the property. He chose exteriors of corrugated steel and board-and-batten siding for their ability to contribute texture and visually align with existing outbuildings. His palette of colors favored a warm brick red inspired by an existing Civil War-era hay barn, and the pale gray of weathered cedar shakes and river rocks. “The idea was that each structure would have its own character but they would in a sense defer to and complement the existing house,” says Gorlin.

It was an unconventional approach, but the homeowners trusted Gorlin’s creative vision and were rewarded with a singularly beautiful result. The expanded home settles into its location as if it existed there for centuries, while interior design choices integrate living spaces with outside vistas.

“We opened up the original house, which was one floor plus an attic, and created a true great room,” says Gorlin. “With the thick stone walls, it’s the most dramatic of the rooms. It connects to the kitchen, a dining area, and then a screened porch.” 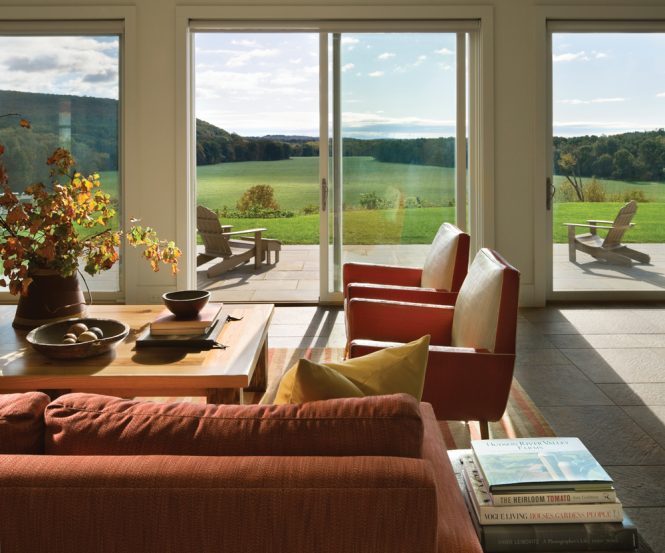 The home’s interiors were designed and furnished by New York City-based interior designer Garrow Kedigian. As Gorlin mirrored the farmhouse aesthetic in his overall design, Kedigian integrated farmhouse-inspired materials, textures, and colors throughout the interiors. Exposing some of the original farmhouse timbers and beams, he repurposed others for use in interior features, such as bannisters, and lined the vaulted ceilings with pine planks to complement the wood of the existing beams. Wood and stone, similar to materials found in the original structure, are featured generously throughout the home’s interiors. While the great room features wooden floors, slate tiles cover the pavilion floor that leads to it, echoing the exterior fieldstone walls visible through the pavilion’s tall glass windows. In the kitchen, pale white oak cabinetry is set against gray ceramic tiles and light stone countertops, making the glass walled room seem even brighter.

Furnishings that Kedigian found for the home include 19th-century antiques, mid-20th-century chairs in the exact brick red found on the exterior and a few custom pieces designed for comfort. The color scheme of putty, gray, and red, accented with the grass greens and golds of the valley below synchronizes interiors with the exterior vistas. 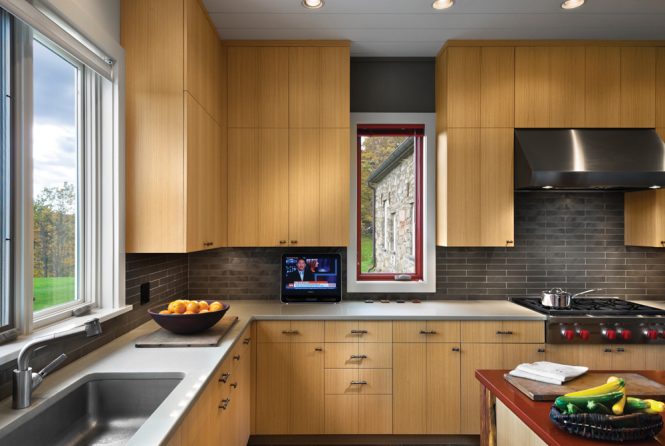 To realize the renovation project Gorlin and Kedigian worked with contractor Eric Carlson of Norseman Construction in Catskill. The renovation tripled the amount of living space and the home now contains about 4,500 square feet, plus a large basement. The primary suite and three guest bedrooms are located in the red rectangular structure bookending the house, while a media room/den structure features a private place for one of the homeowners to write about the Civil War, one of his interests. The den opens to a sun porch with a valley view.

As an architect, Gorlin is best known for projects that favor open spaces and reflective surfaces. Named one of Architectural Digest’s Top 100 Architects since 2000 and the winner of numerous American Institute of Architects awards, he is also a noted architectural critic and scholar. As much as his designs vary—from a glass and concrete waterfront home in Nova Scotia to the renovation of an award-winning temple in Chappaqua to an actor’s sleek loft in Manhattan—Gorlin’s projects all share an airy sky-filled sense of place. “When creating projects, I try to create something that has gravity and substantial quality to it and is rooted in its site, whether it be a city or a countryside,” he says. “And that also uses light and materiality to enhance the place.” 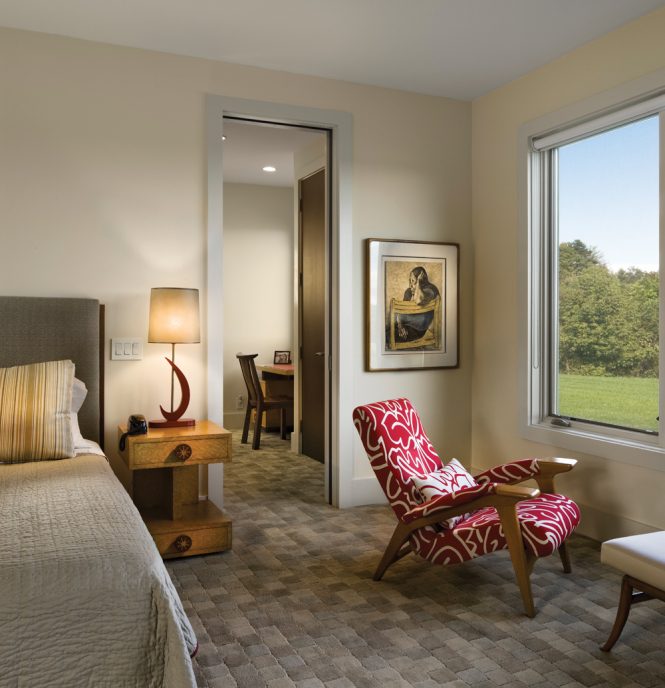 The owners worked with interior designer Garrow Kedigan, who blended modern furnishings with a palette of stone tones and splashes of barn red to connect the interior to the outdoors. Alexander Gorlin Architects

The farmhouse is firmly rooted in its countryside location, providing a very different environment to the one the homeowners previously enjoyed. The homeowners sought an alternative to city life, says Gorlin, and they found it on the 200-acre working farm their distinctive home is set on. “They lived in a glass tower in Manhattan, but then in the country their life is completely different,” says Gorlin. “Now they’re farmers. It’s still a working farm and he enjoys being involved in that.”

For the homeowners, the farmland is rarely out of sight, as every room in the house is oriented to optimize the expansive rural view. “It really is about country living,” said Gorlin. “Inside and outside.”