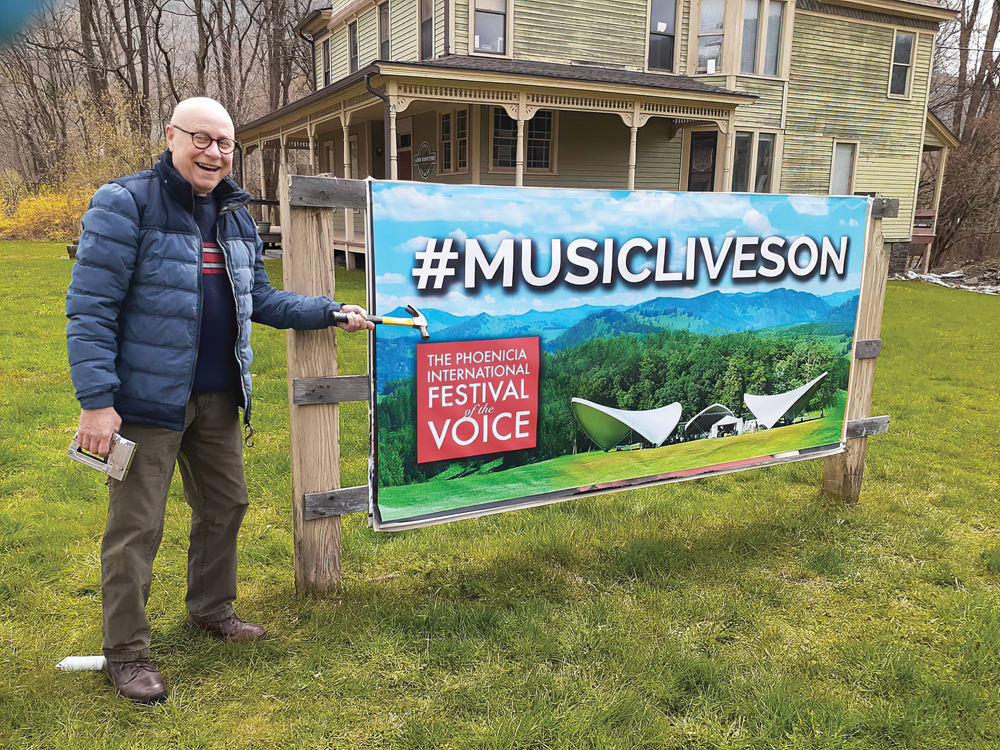 Proximity to Major City: Phoenicia is 68 miles from Albany and 120 miles from New York City.

Nearest Hospital: HealthAlliance is 25 miles to the east in Kingston, and Margaretville Hospital is 21 miles to the west.

In Phoenicia, staunchly independent families, having lived in the area for generations, mingle with refugees from the urban rat race, who have settled amid the Catskill Mountains’ splendid geography. Although the economy depends largely on weekend and summer visitors, the sense of community remains strong in this small rural town in western Ulster County.

The hamlet is situated within the township of Shandaken at the confluence of the Esopus and Stony Clove creeks, and nestled at the foot of Tremper, Romer, and Sheridan Mountains. These natural features have historically governed the human activities of Phoenicia, attracting its original settlers to set up mills along the creeks for water power, with the hemlock forests supplying bark for tanneries, including the Phoenix Tannery, which inspired the town’s name.

Even today, a hiker on any nearby mountain is likely to pass the remains of bluestone quarries that produced stone for New York City sidewalks until the invention of Portland cement. In the mid-1800s, city dwellers began vacationing amidst the spectacular scenery and salutary mountain air that brought a golden age of tourism to the Catskills. The local tourist economy declined in the mid-20th century with the advent of cheap airfare, but in the past decade, when Airbnb and other short-term rentals began to draw visitors to the area, some residents believed Phoenicia’s golden age had finally arrived—although how the town will reemerge from the COVID-19 era remains to be seen.

In any case, since the early 2000s, an influx of people moving to the country or buying second homes brought more money to Phoenicia, but a frontier roughness remains, with hunting a favorite occupation of lifelong locals. And unlike other nearby towns (read: Woodstock and Rhinebeck), Phoenicia remains truly rural, with the town council still trying to address gaps in both cell service and broadband access. Due to the sparse job opportunities, most of the population is under 18 or over 40.

The coronavirus epidemic has shut down most businesses on tiny, two-block-long Main Street, with restaurants limited to takeout. The town clerk’s office is taking measures to ensure all residents have access to food, including low-income families, who can visit the weekly food pantry at the Methodist church, and those at health risk, who can call the town hall for delivery of food.

Under usual conditions, Phoenicia’s the kind of town, says resident Becca Frank, where “I always plan extra time when leaving the house, because I’m bound to run into neighbors who would like to chat. Sometimes I feel like I’m in a fairytale, with bunnies contemplating my tomatoes and an occasional bear crossing the street.” 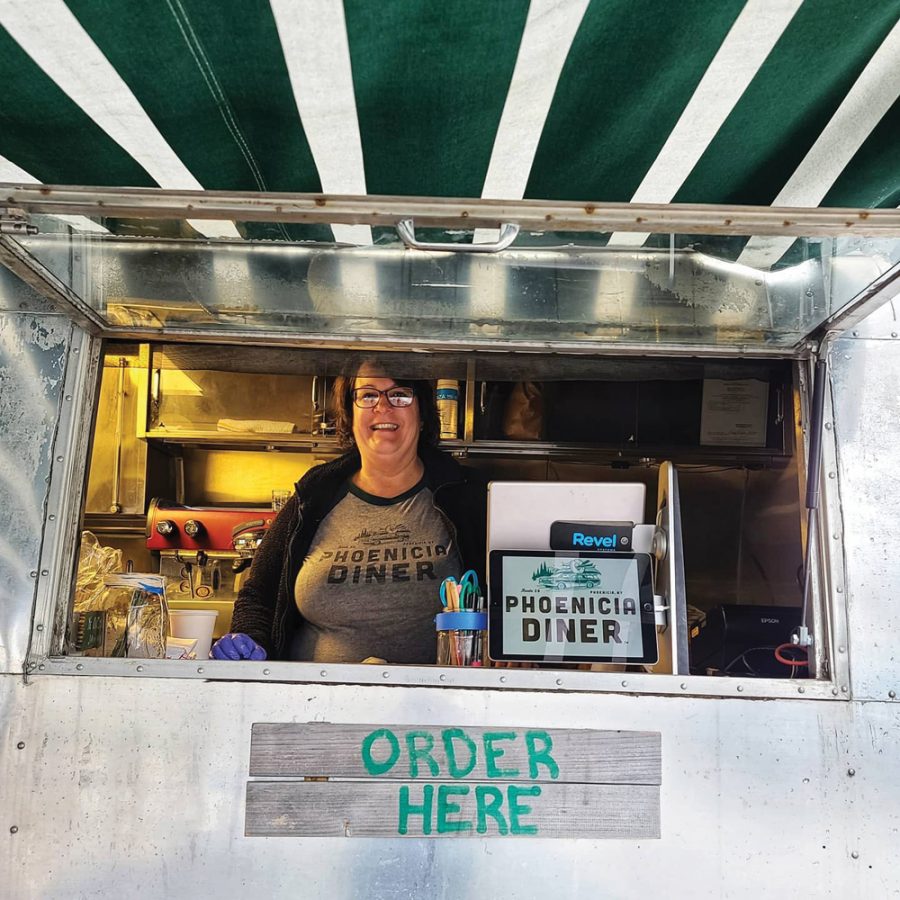 The popular Phoenicia Diner, which recently published an eponymous cookbook, offers takeout during the lockdown from a food truck parked on its property.

Normally, much of the hamlet’s social life is conducted at the local post office, bank, thrift shop, or dog-friendly Phoenicia Library, whose many programs include book readings, film screenings, writing classes, crafts for children, and more. Two art galleries (Varga Gallery & Studio and Phoenicia Arts & Antiques) are currently open on Main Street, while the Phoenicia Playhouse mounts several theatrical productions a year. Flying Cat Music runs a top-notch American roots concert series at one of the hamlet’s three churches. Popular eateries include the famed Phoenicia Diner (whose eponymous cookbook was published this spring) and Woodstock Brewing Company, both on Route 28 just outside town; along with Sweet Sue’s, Brio’s, and The Phoenician, all in town. The nearest supermarket is five miles away, but the Phoenicia Deli and Phoenicia Market offer limited provisions, and household and camping goods are on offer at Phoenicia Supply. Gifts can be purchased at Tender Land Home, Mélange, and the Nest Egg.

Winter sports include downhill skiing and snowboarding at Belleayre Ski Center and at Hunter Mountain, both less than half an hour away. Cross-country skiing is available nearby at Wilson State Park and on the Ashokan Rail Trail, a mostly flat 11.5-mile hiking and biking trail along the Ashokan Reservoir.

Summers are usually busy in Phoenicia, with tourists abounding. At Town Tinker Tubing, adventurous people line up to rent giant inner tubes for riding down the Esopus Creek. Rail Explorers offers tours on pedal-powered rail bikes that run from the historic Phoenicia Railroad Station (also a museum) along the creek, past Mt. Tremper and back. At press time, the Shandaken Art Studio Tour is still on schedule for late July, and the Phoenicia International Festival of the Voice is set to bring opera singers, vocal artists, and music lovers to town on the first weekend of August.

Here, once you gain the trust of neighbors, you may learn the location of a cherished swimming hole, but you must refrain from revealing it online, as such postings have resulted in disaster at several once-pristine sites that became overrun with heedless tourists. Such is the irony that requires Catskill Mountain towns to strike a balance between publicity and secrecy. Tourism is the region’s primary business, but too many visitors can impair the natural beauty that attracts them. In Shandaken, this conflict is expressed through the effort to devise a permitting process for short-term rentals, which some residents say have degraded the character of formerly intimate neighborhoods. Regulations under discussion may outlaw purchasing a house solely for short-term rental.

As Phoenicia grows in reputation, partly due to articles in the New York Times and travel magazines, home prices have shot up in recent years. The pandemic has only increased demand for homes in the region, as city residents seek a “‘safe house’ in the country to turn to in difficult times,” says Amy Rosen of Ruth Gale Real Estate.

The agency’s owner, Alfred Peavy, adds, “Closings are taking place in a relatively normal manner while observing personal contact restrictions. Statewide, all showings must be conducted on a virtual basis.” Although action has slowed due to the regulations, he perceives “a significant pent-up demand with an expected resurgence of sales when constraints are modified enough to enable semi-normal activity.”

The hamlet and surrounding area still offer a few cabins and cottages priced under $200,000, but they may be located in a flood zone, require insulating to be fit for four-season living, or simply need extensive fixing up. Building lots are available, and the area abounds with talented contractors, often booked months in advance. Because of Phoenicia’s location in the New York City watershed, building regulations are stringent and complex.

At $200,000 to $400,000, properties include homes with two to four bedrooms and up to two acres of land. Styles vary from custom cabins to split levels and ranches, many of them located near the hamlet.

Above $400,000 are an updated 1850s hunting lodge with in-ground swimming pool, luxury retreat at the end of a private road, and rustic cabin on 12 acres. A seven-room historic mansion on the slope of Belleayre Mountain is selling for $3,250,000.