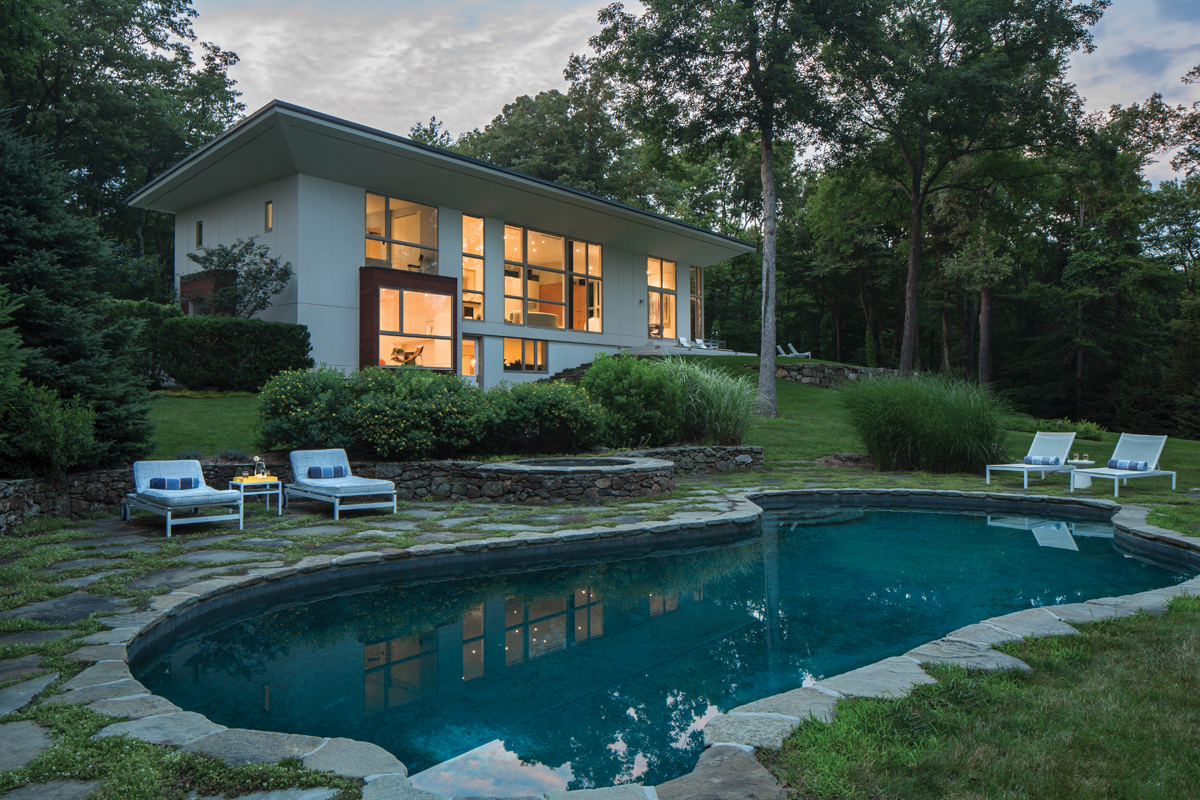 When Frank Webb meets a new client, he asks them, “What makes you happy?” 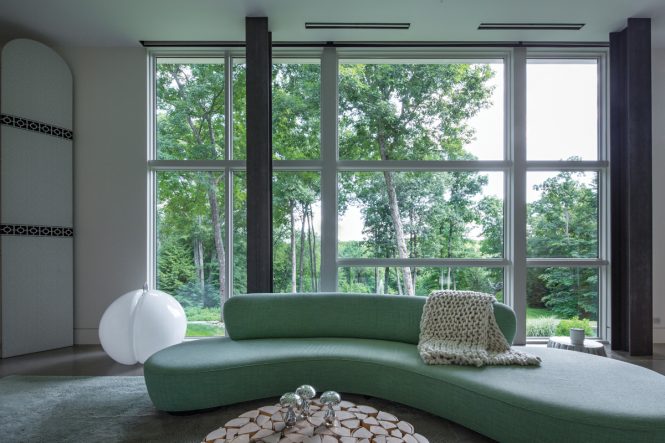 The living-room windows provide a panoramic view of the property. A green Vladimir Kagan sofa and a Fredrikson Stallard coffee table made of cut birch logs create a bridge to the outside.

Creating home interiors that make clients happier is what motivates Webb as a designer. So, when Webb and his husband, actor Steve Schroko, purchased a house in Pawling, he considered the same question, then decided on materials, designs and one-of-a-kind furnishings accordingly.

The couple intended to merely renovate the 1970s structure, turning a hodgepodge of rooms into a brighter, airier space, but, ultimately, complications made it cost efficient to raze the building. Working with New York City-based SPG Architects, they created a new structure within the existing footprint. “We tried to work within that,” says Webb. “It occupies the same spot on the property as the original house, but we configured it in a way that is a lot more livable.” 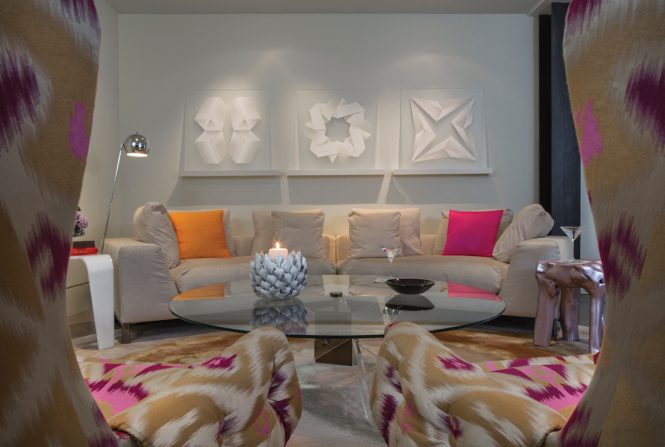 The media room showcases a trio of paintings on acrylic by Jay Shinn. Comfortable seating includes a deep, butterfly-shaped sofa by Minotti and a pair of vintage Italian armchairs, all of which sit atop a round rug designed by Webb.

Two years of construction resulted in a meticulously crafted home that is carefully aligned with its environment. The symmetrical house is set neatly under the tree line, making its straight modern lines seem as natural as a stone bluff. “SPG Architects designed it in such a way that it would be unobtrusive,” says Webb. “The front and the back of the house look very different. The back looks much more commanding. It’s a function of the slope of the property, whereas the front is meant to be serene and simple. Not something you would remark upon from the street.”

Cedar bump-outs neatly define the home’s simple-yet-elegant entrance and frame a rear window, visually complementing the wooded terrain. Making the home bright and airy was a priority, so the ceiling height of the living room is a lofty 12-and-a-half feet, while floor-to-ceiling windows offer unimpeded pastoral views. Webb worked with Nievera Williams on the architecture and landscaping plan that’s formal when closer to the house and transitions into wilder wooded areas further away. While the home’s swimming pool existed before the renovation, it was resurfaced and the equipment reoriented. “We darkened it as well,” says Webb. “To make it look more like a natural body of water.” 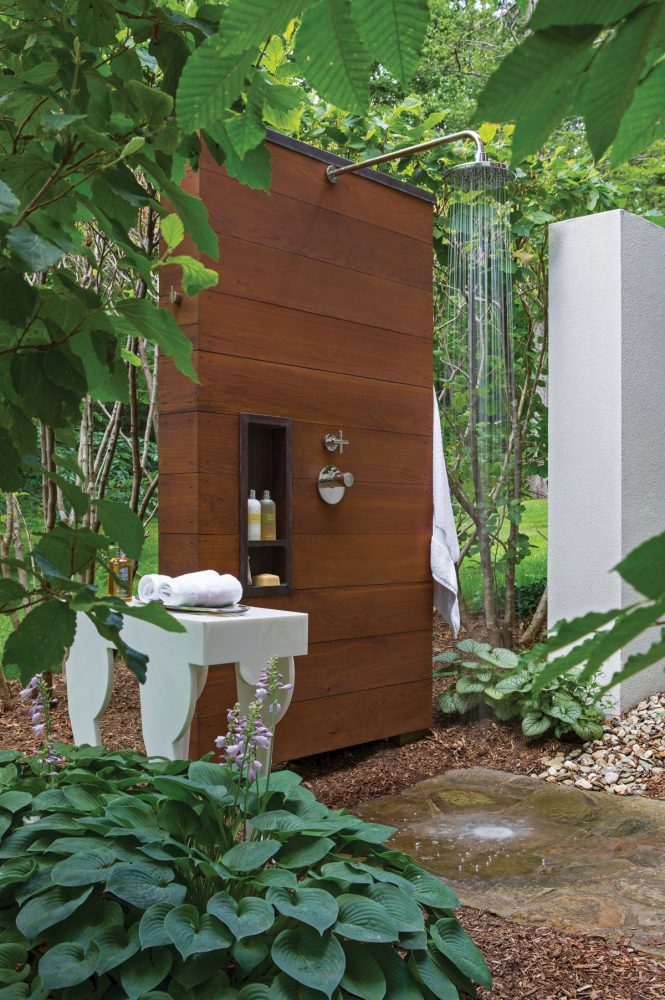 For an enviable crowning touch, he added an exterior shower. “In the shower area, you can see a white stucco wall that is actually an original foundation wall for the house,” he says. “We kept it and reconfigured it to become more of a privacy barrier for the outdoor shower. We love the idea of having one and being able to access it from the primary suite. Everybody wants an outdoor shower.” 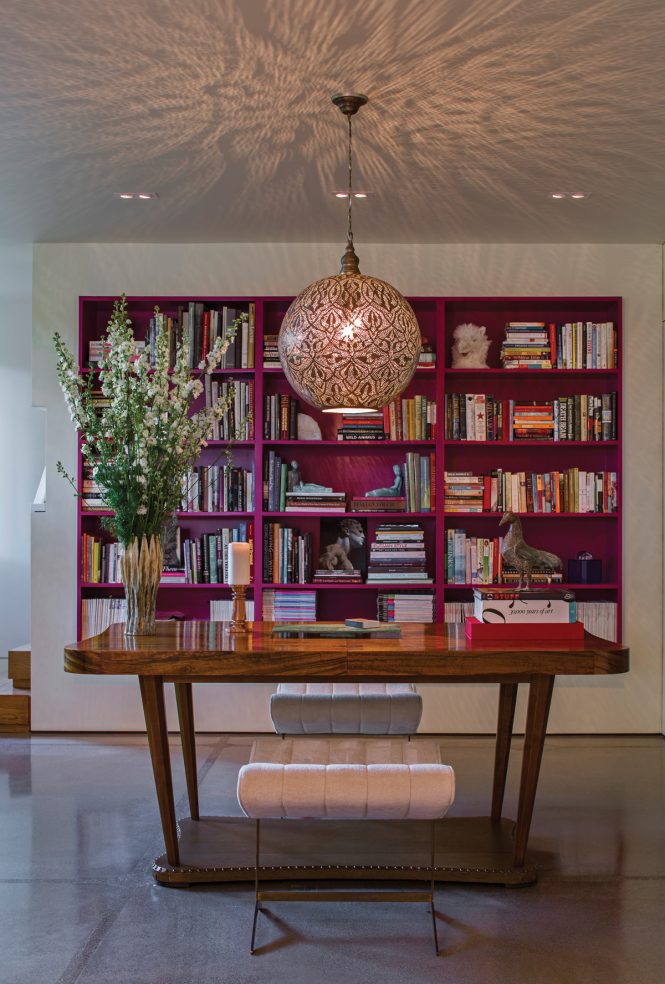 The media room contains an eye-popping bookcase painted in Pantone’s Baton Rouge and a vintage table by Gilbert Rohde and stools from Pascal Boyer Gallery.

Webb worked with SPG Architects and Nievera Williams on the home’s architecture and landscaping, but the interior design choices are all his own. Those choices include unique and vintage furnishings, subtle textural accents and an exuberant palette of colors and select patterns.

The open kitchen features walls of cabinets and drawers plus a counter/work space clad in a warm chestnut, seeming even warmer in contrast to the polished concrete floor. In the primary bedroom, a wall clad in orange grasscloth wallpaper serves as a backdrop for an oversized custom-designed headboard. Against pale walls Webb placed flowery bursts of color using vivid artwork, a sunny yellow vase, and visually arresting built-in violet shelves. 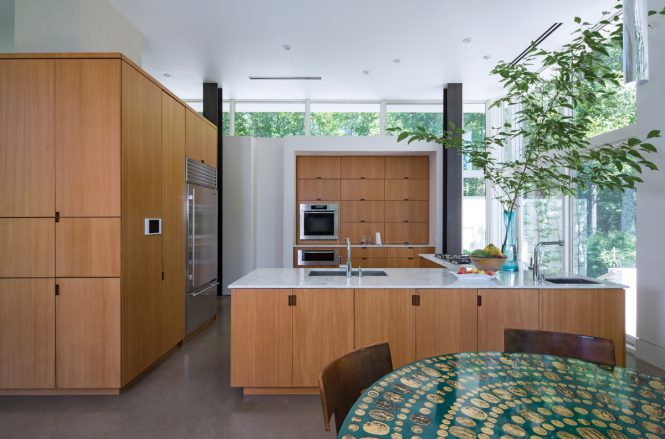 In contrast to the kitchen’s sleek teak cabinetry and quartzite countertops, a Susan Silton artwork and a Fornasetti dining table add color and pattern while also serving as conversation starters.

“I don’t adhere to the super minimal,” says Webb. “My interpretation of what’s contemporary, modern, and comfortable is key. I just want people to feel the expressiveness of that simplicity and the sense of relaxation. I think the colors and furnishings do something to make you feel relaxed and excited as well.”

A “happy palette” is how he describes his color choices. “We have a periwinkle guest bedroom,” said Webb, “There’s orange in the primary bedroom, a kind of ultraviolet base in the media room, adding in pinks and golds. That rich violet color of the bookcase in the media room is one of my favorite colors. I wanted to do a little bit of an experiment. I wanted it to be playful and yet sophisticated at the same time.” 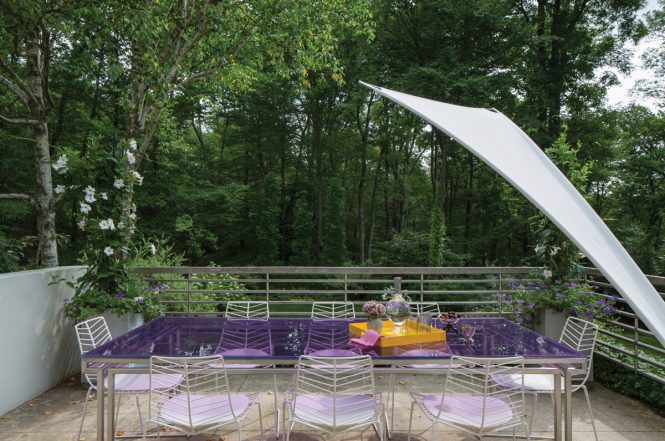 A custom-colored glass dining table brings a pop of color to the outside dining terrace.

In the high-ceilinged great room, attention naturally travels to the far wall and a large photograph by Massimo Vitali. The Italian photographer is known for photos with a bird’s-eye view of crowds, particularly beachgoers. “This is a departure for him and we love this one,” said Webb. “It’s actually a photograph of some sort of celebration happening in the Luxembourg Gardens in Paris. There are people on picnic blankets and there is all this greenery. We love the perspective of the chairs going into the distance.” 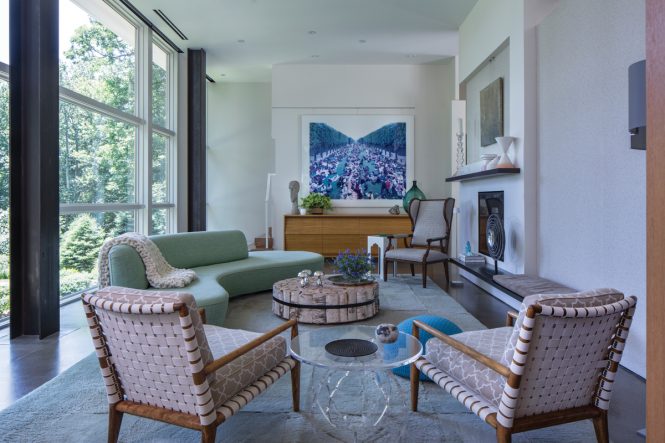 The ideal place to view the photo is on the pale green Vladimir Kagan sofa that centers the room. “But what’s really kind of cool is the coffee table in front of it,” says Webb. “Which is by a British design firm called Fredrikson Stallard. They do a lot of stuff that is now collectible. Their  designs are very popular. This is sort of in the early days of that. This is a table that is made from cut birch logs—very precisely cut—and then banded. It’s very simple and very rustic in a way, yet there’s a level of sophistication to it that makes it an interesting focal point in the room.”

Another appealing choice is the dining room table. “The dining table is by Fornasetti,” said Webb. “It’s a vintage table, probably from the ‘50s or ‘60s. To me it’s not the least bit country in feel, but it works here. I love how incredibly rich the design of the table top is and it simplifies what you need to dress the table. For placements, for china, for glassware, we can be very simple because the table itself is doing all the work. It’s beautiful and very rare, because they did a lot of these tables, but usually in much smaller sizes. I’ve yet to find one in that design in that size. To me it feels super special.”

The colors on the glossy table top harmonize with those in the striped artwork placed above. Webb’s love of color extends to the outside eating area, where a long purple glass table reflects the passing clouds and the changing colors of the sky. It’s one of a kind. “I had it made,” he says. “The table frame designs came from a company in the city called Designlush and I worked with them to customize the glass top to get to that color. I just gravitate toward that color direction. The table is amazing. Just reflecting the blue sky with the clouds in it. I love it.” 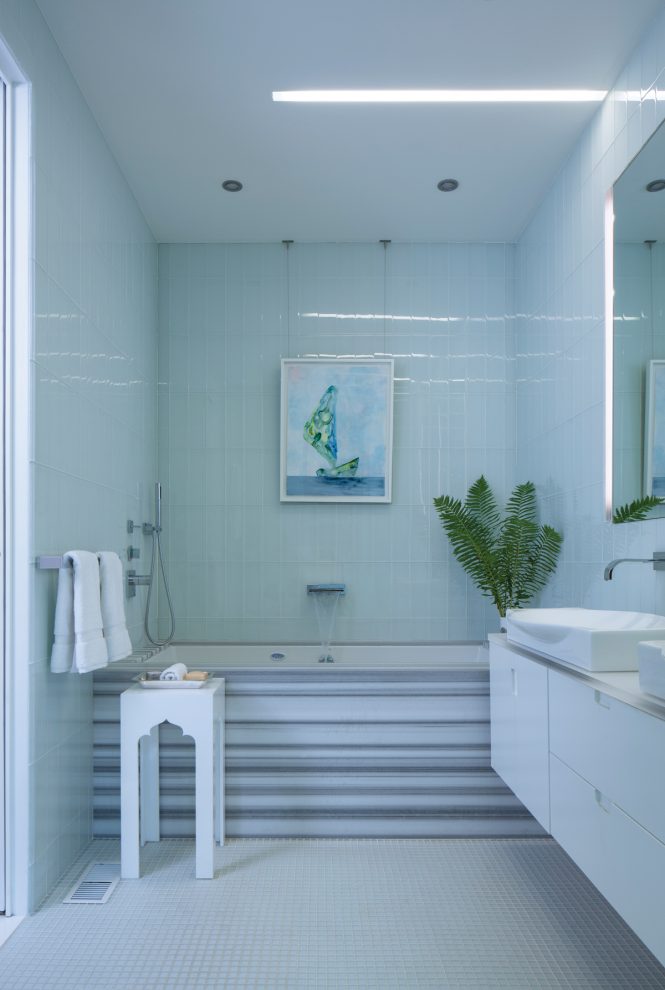 Despite Webb’s distinctive gift for design, he did not originally work in the industry. He studied and worked in finance, eventually becoming a managing director in client services at JP Morgan Investment Management. Ultimately, finance did not make him happy.

“I decided I wanted to leave finance, but I didn’t know what I was going to do next,” he says. “I really thought I was going to go into the nonprofit world and I did spend some time interning in that space. Then I happened to meet the person who would ultimately become my business partner.” 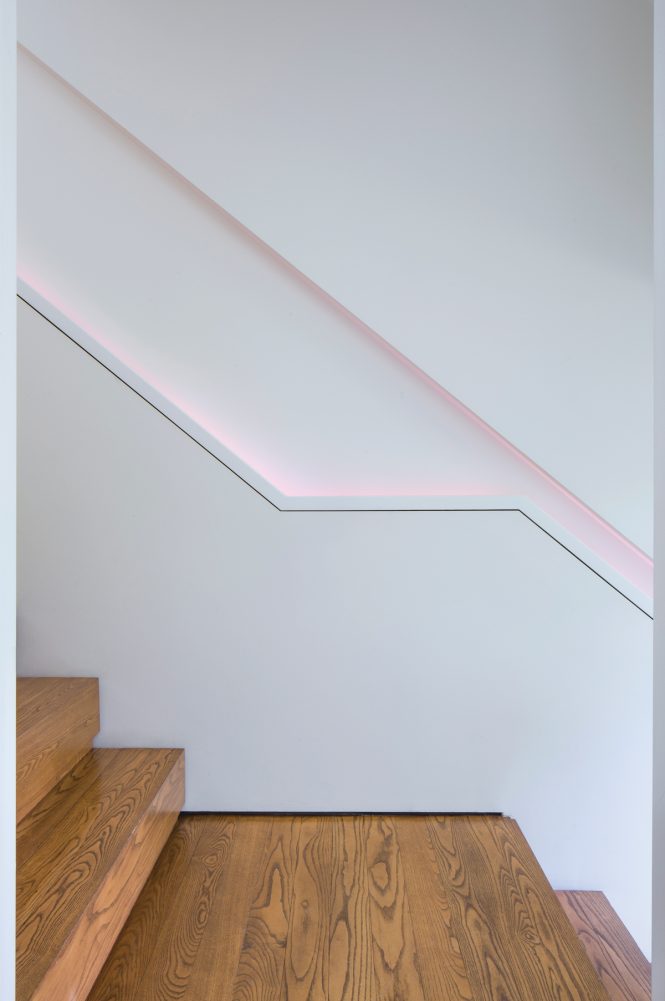 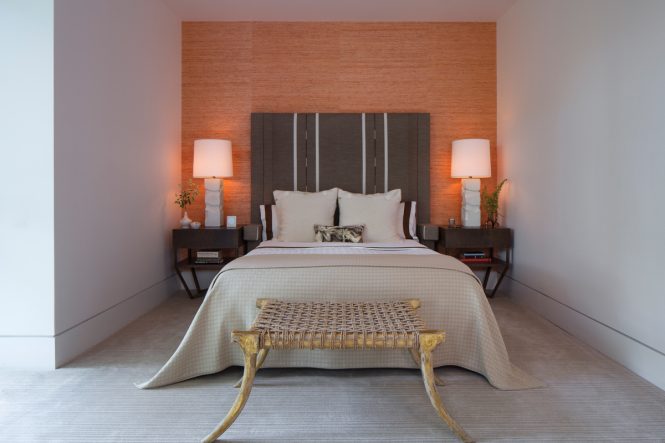 The sleeping area of the primary bedroom includes a bed and nightstands designed by Webb.

Webb met business partner Matthew White in an elevator, when they each bought apartments in the same small building, around the same time, and were both engaged in major renovations. The new neighbors compared design philosophies and decided to work together, which they’ve done successfully for 18 years.

“I was so incredibly fortunate to team up with somebody like that,” says Webb. “Somebody who was willing to share in the design process. It’s very difficult for people to do in general and I think I was incredibly lucky. To this day, I’ve got myself a great partner.” And Webb has a home that makes him happy.