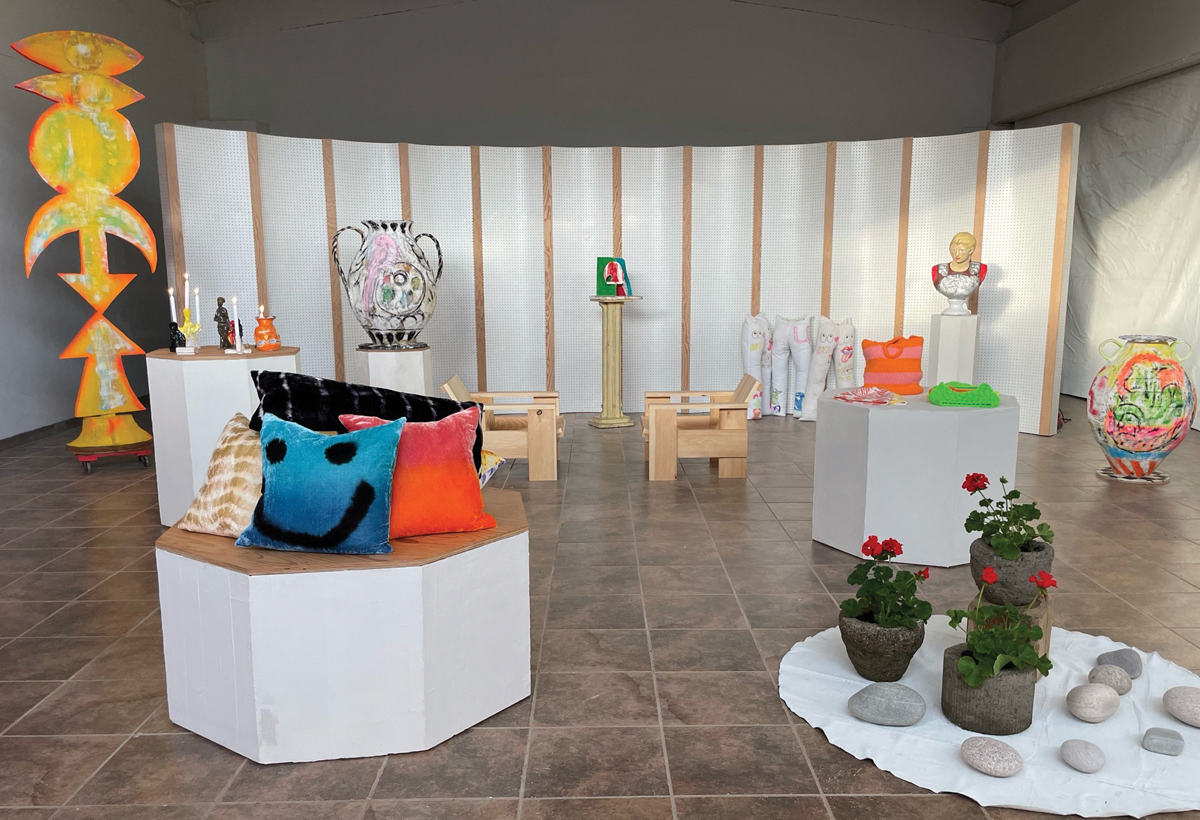 The reality of four high-profile artists setting up shop in Ellenville is certainly a sign of the times. The wave of change that has slowly rolled over the region in the past two decades is finally touching Ellenville in the wake of a path cleared by the village’s longtime cultural bastion, Shadowland Stages, and nurtured by local community members eager for their town to forge new glory days.

In June, singer-songwriter Eleanor Friedberger and visual artists Michael Berryhill, Milton Carter, and Hally Erickson opened Weird in a Mid-Century space in the middle of town that had once been an annex to the historic Wayside Inn, the rest of which burned down in the ’60s. More recently, the space was the showroom for the Nevele in its brief but vigorous campaign for one of New York’s casino licenses. If you ask around, opinions are mixed on the subject of the failed bid, but what’s sure is that the space’s current tenants point toward a new direction for the town and a future that doesn’t involve slot machines and roulette tables. 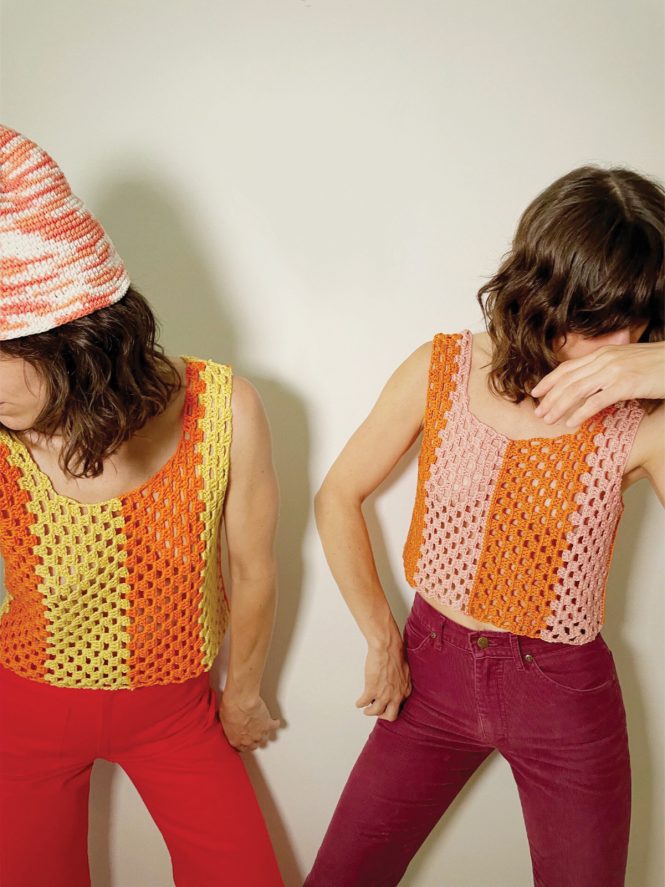 Eleanor Friedberger models cotton knitwear made by her mother for Weird.

Friedberger, known both as a solo artist and one half of the Fiery Furnaces, moved to Ellenville in 2019. She has long been friends with artist and designer Milton Carter. For many years, they both lived in Greenpoint, where  Carter ran a lifestyle brand called M. Carter. Both relocated to Kerhonkson in 2013. Together with their respective partners, the creatives turned to art making and experimentation when the pandemic hit.

“It started with some casual get-togethers with the group of us, experimenting with making stuff,” Friedberger explains of the seed for Weird. “We’re all artists of some sort. A few times after dinner, we would get together to try out things that were maybe outside of our specific mediums.” 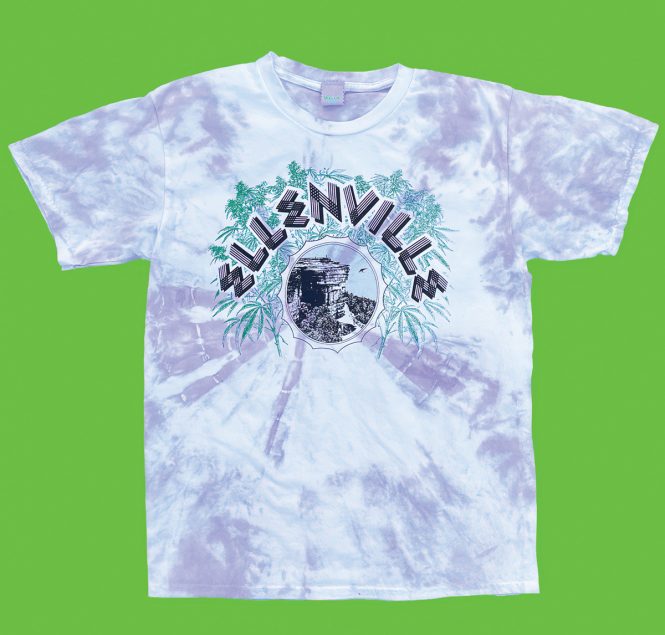 Right: The hand tie-dyed Ellenville T-shirt employs the font of the Nevele hotel.

When the Canal Street storefront became available, it provided a place to display and sell all of the wares the group had been creating. In a rejection of the sober neutral palettes and black-stained modern farmhouse aesthetic that has proliferated upstate in recent years, Weird is an explosion of color. “The four of us have a sense of humor about things,” Friedberger says. “Hopefully the playfulness is coming through.”

The shop’s Instagram is a fun, far-out, living mood board for the store itself, which pulses with brightly colored sculptures, furniture, ceramics, wall art, lighting, and crocheted garments made by Friedberger’s mom. There are also posters, hand tie-dyed tees, pillows, and more, all made by the four owners. 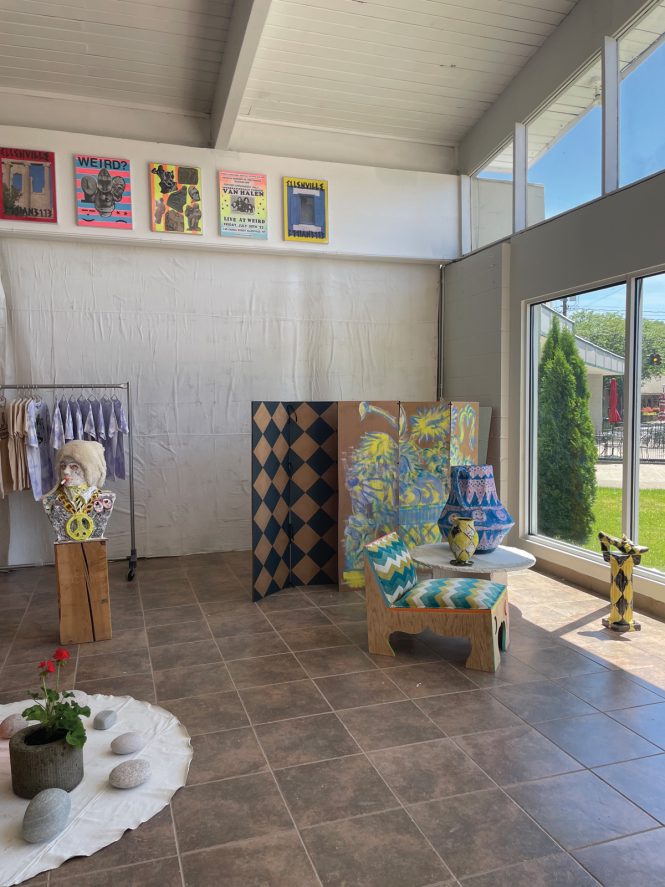 “It was a big push to get it open and we’re still kind of figuring out what we are trying to achieve,” Carter says. “Overall, it’s an art project. We are trying to create an experiential space for the visitor, but making the things to sell, tailoring the sound. How do we create a retail space and then run it? It’s a learning process. We’re going to keep adding to it as we keep experimenting, and hopefully it will continue to grow throughout its lifespan.”

There is a possibility that other artist friends will come onboard to sell their wares at the storefront, and Weird might even host live music and other events if the owners can get the approval. But for now, the focus is on the production of the objects and on the space itself as a four-dimensional interactive work. Everything from the display shelving to the tables was custom made by the group for the space. “When we were getting together originally, it was an opportunity to experiment outside of our mediums and disciplines,” Carter says. “For me, asking ‘How can I apply the things I’m interested in right now to designing a space and all the things we built for space? How can we apply the thinking to textiles and sculpture and lighting?’ It’s a bit of a laboratory of seeing how we can apply our level of craft to different stuff.” 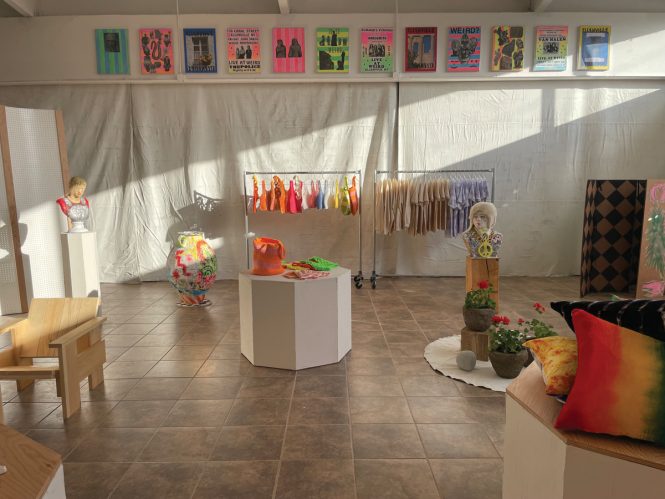 While Carter and Berryhill have historically worked in 2D visual art and design, the two are now applying themselves to lighting and furniture, while Friedberger, a musician by trade, has begun dabbling in painting. “I have been living with a painter for the past however many years. It’s embarrassingly infectious,” she says with a self-effacing chuckle. “That has been my journey last few months: Trying to make stuff on paper and canvas that is personal to me.”

The group takes inspiration from nostalgic reference points in the not-so-distant past of the region. Describing the vibe, Carter says, “It’s what we imagine upstate to be like if we go back in time—think of the Band hanging out in Woodstock. They look like farmers.” Friedberger points to the Fallsview Hotel in Ellenville (now Honor’s Haven), whose main hall was a Tropicana riot of fuchsia and red. “We are presenting an alternative narrative of creative life in the area,” Carter says.

The retail aspect of the endeavor doesn’t cheapen the artistic exploration for the group—it is another facet to work with. To that end, thought is put into every detail, down to the garment tags. “Everything we do in the space is considered,” Carter says. “This is part of the experiment and art project aspect. How do you want people to respond to what they see and what they hear to create an overall environment? How do you put the price tag on the object? How do you want people to feel when they pick it up?”