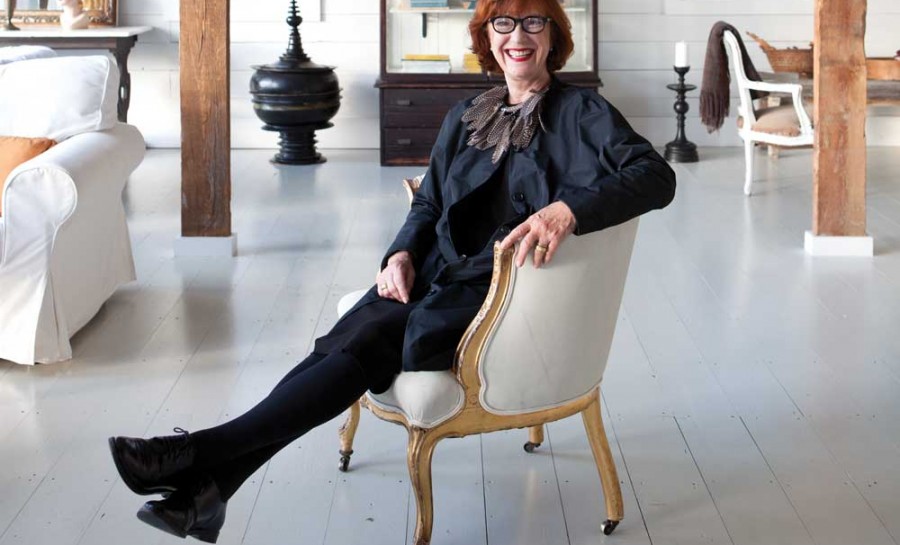 Gun Nowak leans over the dining room table in her 1870s Germantown farmhouse while she conducts an impromptu review of some highly pigmented eye shadow. Even though she has approved thousands of shades and textures since she first founded FACE Stockholm cosmetics in 1982, she’s still enlivened by the process. “When it comes to creating colors, I’m like a kid in a candy store,” she says.

In all 28 of her stores, including the two locations in Hudson and Rhinebeck, tables coincidentally play a central role. They replace conventional counters and display a staggeringly diverse palette of nail polish, foundations, and lipsticks as if they were art supplies. The tables, along with the occasional vintage fixture and antique mannequin head, also help promote an intimate approach in a business where glitz and pressurized sales are often the norm. Many of Nowak’s sales assistants are professional makeup artists, and their philosophy is to educate and build confidence, rather than feed into customers’ insecurities. 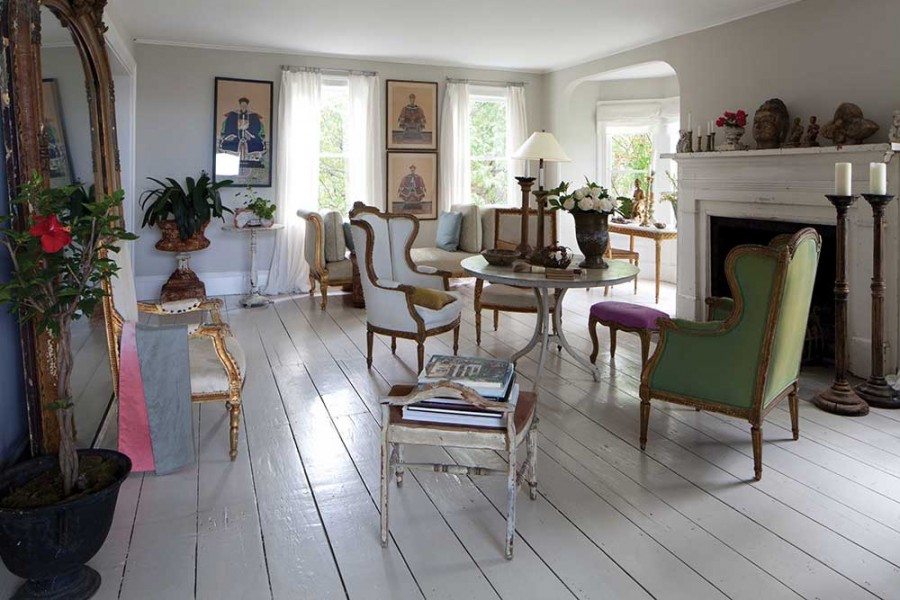 Nowak’s house and its adjacent barn are sited on 12 bucolic acres Nowak had no solid renovation experience, so she left most of the house’s bones intact. She asked her contractor to remove as many of the ground-floor interior walls as possible and installed a compact kitchen adjacent to the dining room. Spread over two floors, the 2500-squarefoot space now has an intuitive flow and its logical layout utilizes every nook and recess. Both the house and barn share an inventory of antique display cases, industrial fixtures, tallboy haberdashery cabinets, and Asian artifacts, and the overall decor is simple, bare-floored, and abundantly white. As a leitmotif, tall mirrors crop up in practically every room on screens or leaning against walls in ornate frames, where they magnetize and reflect light. “It’s a habit I acquired growing up in Sweden,” says Nowak, “where we try and harness every bit of available daylight over the dark winter months.”

The compact upstairs spaces, including an office, spare bedroom, and dressing room, feel purposeful and somewhat industrial. By contrast, the entire ground floor feels elegant, and includes living and dining room furniture Nowak shipped in from Stockholm. The handsome decor marries exuberance, formality, and restraint, and references Gustav III, the 18th century Swedish monarch who reappointed his palaces in a pared-back, simplified rendition of French Neoclassicism after visiting the Palace of Versailles. Classically, the style’s color scheme leans toward washed-out blues and muted grays, but here the jolts of red and green upholstery reflect the influence of Nowak’s frequent travels around India and Tibet. 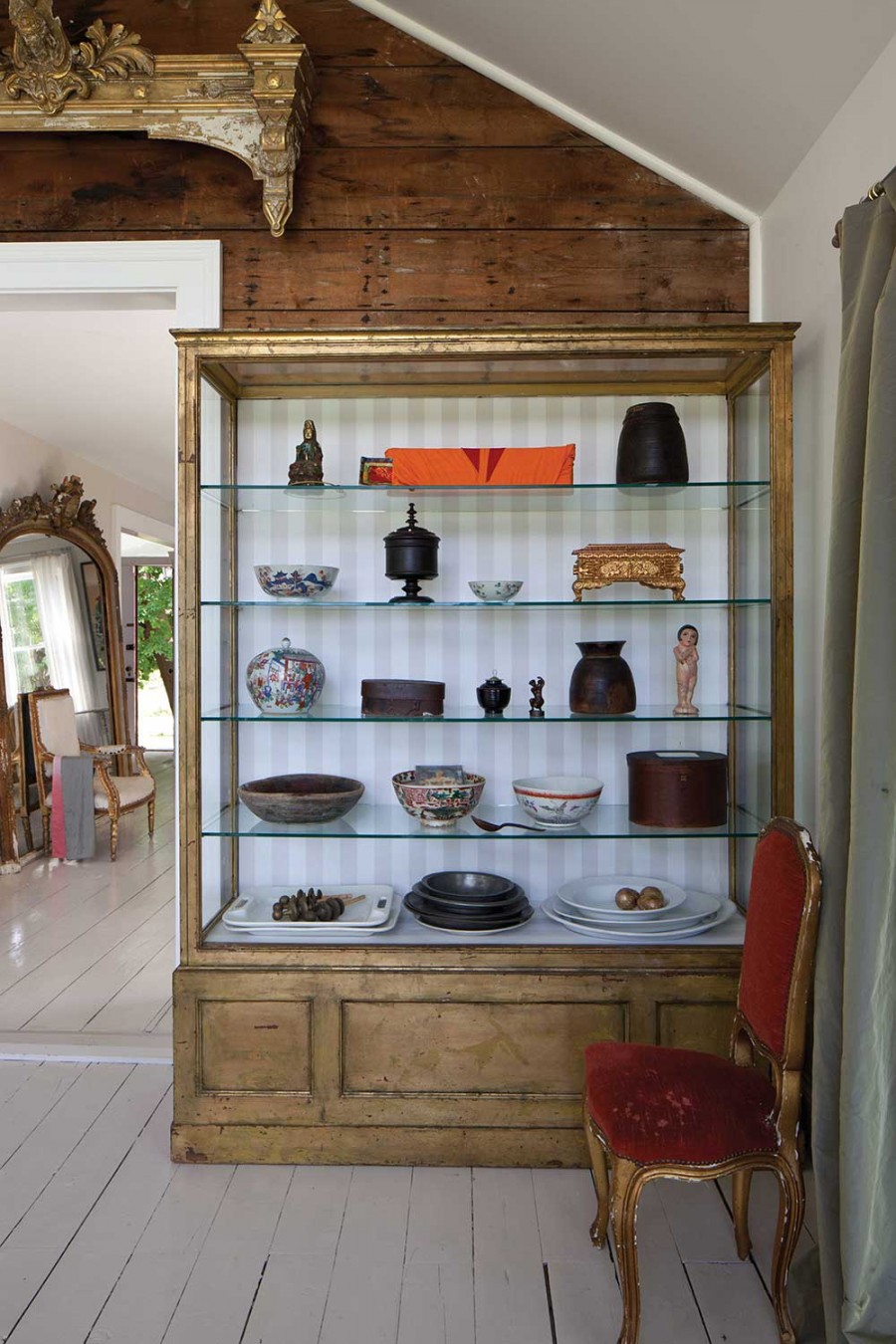 A short walk from the house, the barn is always set to accommodate guests, and it also functions as a location for catalogue and fashion shoots.  A wall of rectangular windows frames the distant peak of Round Top Mountain and showcases the occasional bald eagle that swoops into an uncultivated, sloping terrain of sumac, flowering dogwood, hackberry, and milkweed. Whitewashed and virtually devoid of interior walls, the 1500-square-foot loft is a veritable light repository.

“Martina is the head and I am the feet,” says Nowak by way of differentiating her and her daughter’s compatible entrepreneurial skills. The allusion also touches on Nowak’s nomadic nature. “When I travel, I like to be spontaneous, which of course drives my husband crazy,” she says. “I have this ability to take root and ‘be’ wherever I find myself.” 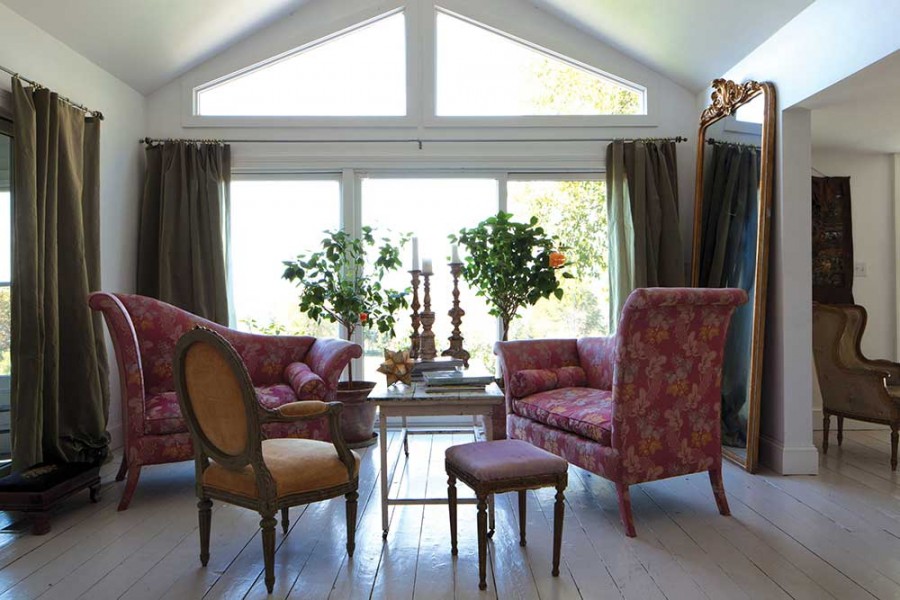 Josef Frank, the celebrated Austrian architect who influenced Swedish 20th-century design more than anyone else and used a riotous amount of color in his textiles and furnishings, would surely approve of FACE Stockholm’s similarly vibrant color palette. He described the random harmony he achieved in his designs as “accidentism,” and the word also seems to apply to Nowak’s nonstereotypical business approach. In a business model that might be unprecedented in the beauty industry, FACE Stockholm is affiliated with everything from eyewear to bicycles, and at one point collaborated on a fair-trade jewelry initiative that empowered HIV-positive women. “I guess it’s a modest stab at trying to create a lifestyle brand,” Nowak says. “My early roots were in fashion, and I can’t think of anything more gratifying than being an interior decorator. In the back of my mind I dream about opening a store that combines clothing, furniture, textiles, antiques, and jewelry. I’d travel the world and pick up whatever I fell in love with. Trouble is, where would I find the time?”