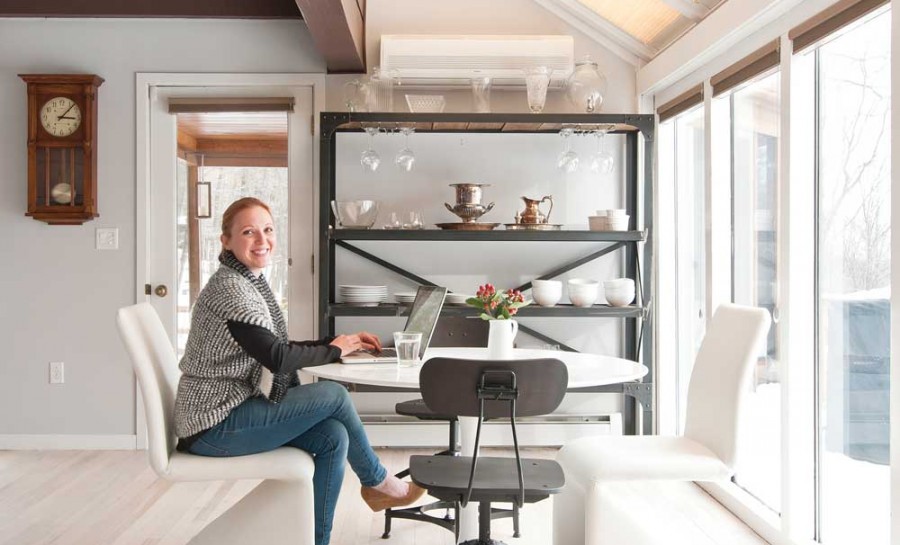 The woman had found the perfect man, but his house, a mountaintop bachelor pad with a spectacular view of the Ashokan Reservoir, was not so perfect for her. The husband had bought the five bedroom, four-and-a-half-bath, 1980s contemporary post-and-beam replete with its furnishings before they met. The interiors, she felt, were dated, with a “log cabin look”: stained red oak hardwood floors and age-yellowed beams, ceilings, spindles, and stair rails. “All I could see was orange,” says the wife.

While her husband was “desperately in love with it, despite the orange,” the wife couldn’t imagine a way for the house to become the welcoming second home she wanted for her family and all their combined friends. “He had blinkers on as to how much work it needed,” says the wife. And though the husband had purchased seven acres of land with the house—enough to build another home—he had already renovated the kitchen and two bathrooms and added a swimming pool by the time they married. Bulldozing and rebuilding higher up the hill was not feasible. The couple decided to put it up for sale, and enlisted the services of a designer to make it market ready. 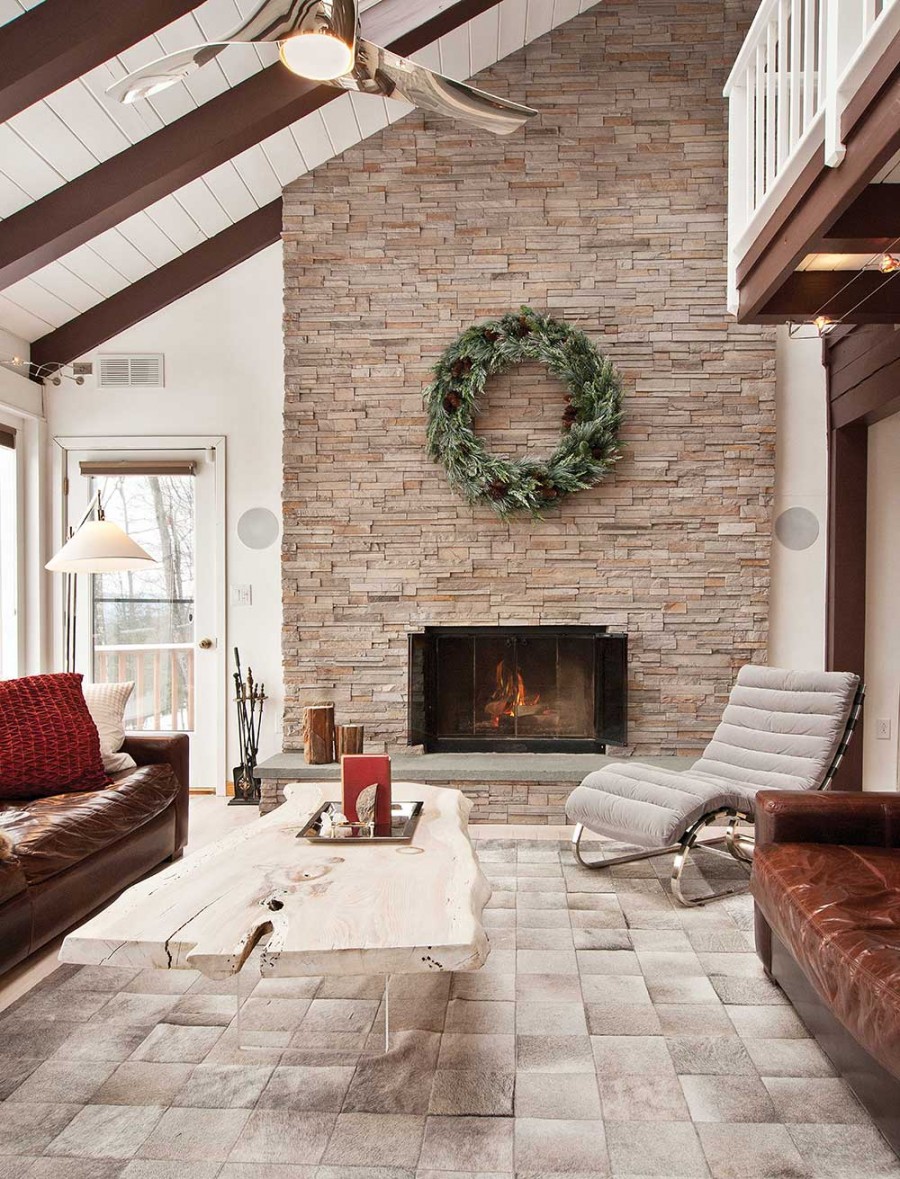 The first decorator, from Manhattan, had the wrong idea about an upscale country house; she wanted to sell them a $50,000 dining table. “It was a complete divorce from reality and Woodstock values,” says the wife. “My husband thought, ‘I’m from Kingston, not Manhattan. You’re not going to rip me off.’” Instead, they found a local designer, Megan Oldenburger of Woodstock-based Dichotomy Interiors, to ready the place for real estate agents.

The wife’s instructions were to create a “classy, but not too classy” look, something that still read as quirky. That meant a mix of modern fixtures and clean-lined rustic elements, all suggesting a relaxed atmosphere but a kind of  rustic posh. With four stories from the walkout basement to the master suite loft to fill, Oldenburger had her work cut out for her.

Her first point of order was to temper the stained red oak that dominated the space—the major de-oranging of the living and dining areas. Harshly colored floors were sanded and whitewashed and the wooden ceiling was brightened with white paint and highlighted by covering the beams in a deep chocolate brown. 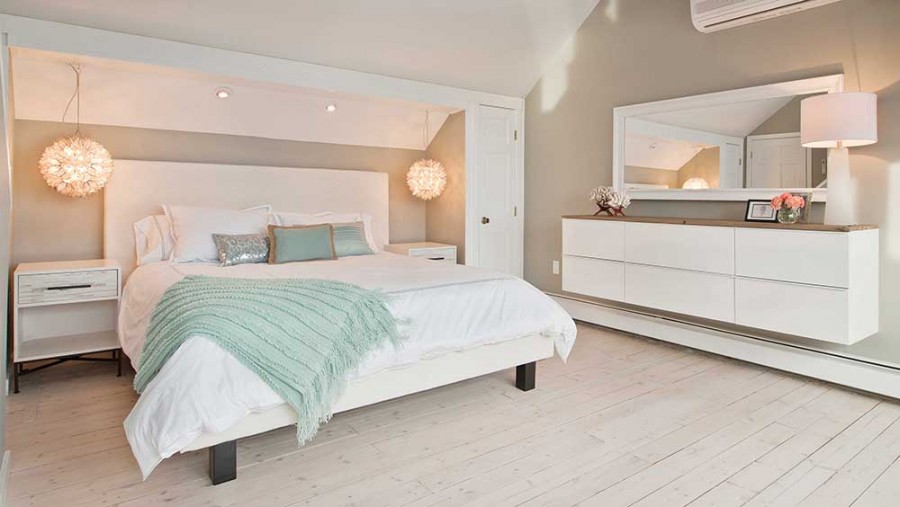 By the time the floors and ceilings were refinished by Oldenburger’s crew, the house seemed transformed, so much so that the couple changed their minds about putting it on the market. “She fell in love with it,” says Oldenburger. Rather than a house for someone else’s holidays, it now seemed like the perfect spot for this couple and their visiting family and friends.

Oldenburger then set out to achieve her main goal: allowing the outdoor vista to reign while matching it with an equally pleasing interior. She wallpapered the foyer in a design of black-and-white birch trees and lit it with a mason-jar chandelier; once visitors pass through it, they’re treated to a floor-to-ceiling wall of glass in the living room, facing south and overlooking a deck and lowerlevel swimming pool and the majestic topography beyond.

The designer likes to source furnishings and accessories from local artisans, or even Etsy, and introduce elements of surprise. In this house, that meant a fauxantler sconce near the fireplace, a peace sign in the dining room, and Woodstock posters in the bedrooms. “I never like going into a house where you can say, ‘I know where that came from,’” says Oldenburger. “It’s nice to balance elements with custom-made and vintage pieces. It’s another way to find harmony between the feminine and masculine.” She added a gleaming, propeller-like ceiling fan in the living room to act as counterpoint to all the natural elements. 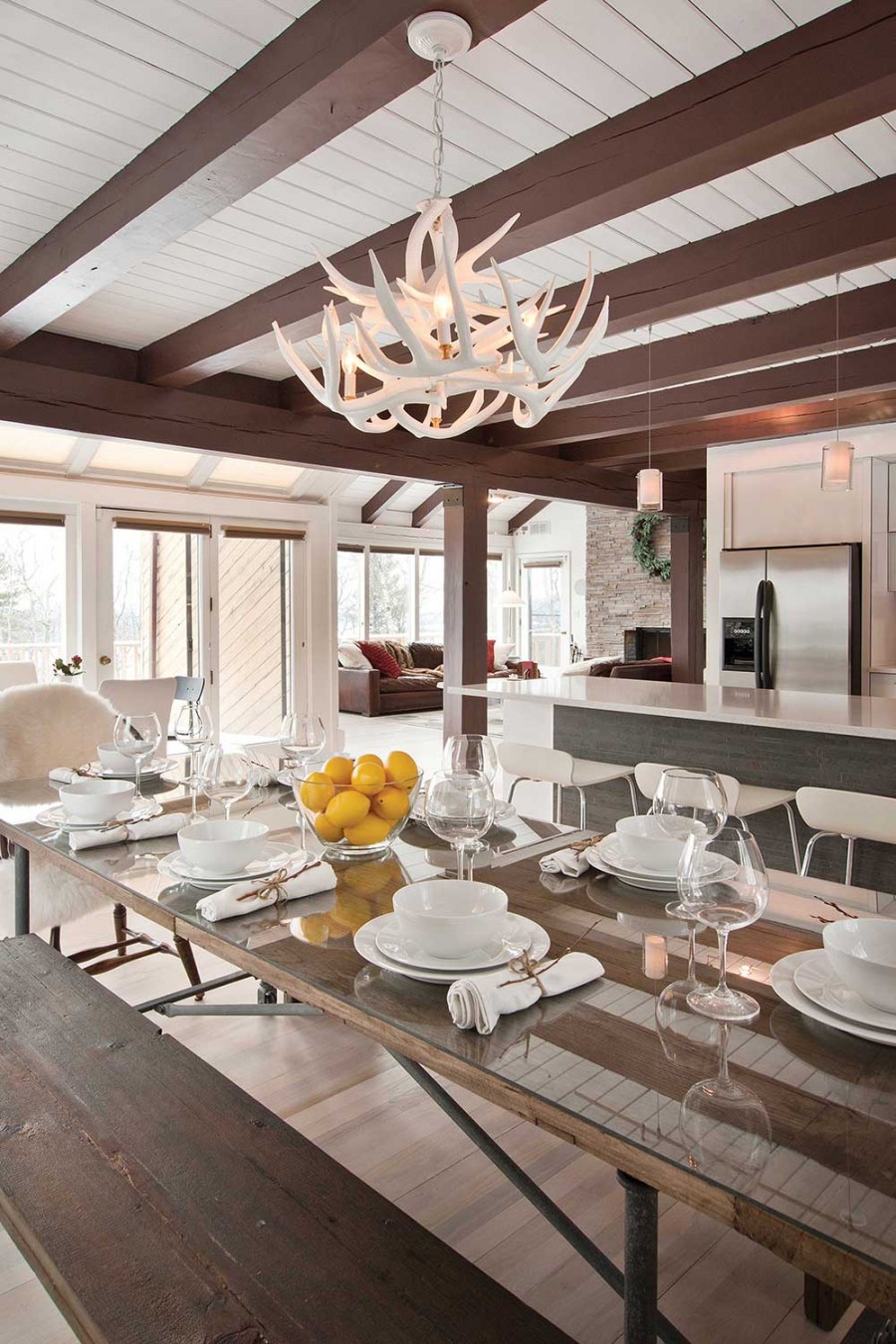 In the living room, Oldenburger decided to reinvent the small fireplace built of irregular brown stones. Designed and installed by Tom Mayone, the newly surfaced fireplace facade is made of stacked bluestone and fills an entire vaulted wall. “The hearth piece weighs over a ton and took four men to bring it in,” says Oldenburger. Massive enough to have required a structural engineer to ensure the floor’s strength underneath it, the fireplace eases the eye and blends with other neutral elements. Oldenburger added a rich, brown leather couch-and-loveseat ensemble and a light gray velvet chaise lounge. The opposite wall of the living room became entertainment central, where three of the house’s 10 televisions, one giant and two small, are mounted in a neat rectangle. Oldenburger employed Chris Wasserbach of TSSI Electric to hang the screens and clean up the tangle of wires and speakers, so that avid sports viewers can focus on “three games at once” rather than the mess.

The rest of the electronic equipment in the living room was housed in a custom media cabinet built by master craftsman Emerson DuBois, who used reclaimed wood for the doors; it’s elevated off the floor to expose baseboard heat radiators. Custom furniture, in fact, is a signature of Oldenburger’s work, whether she designs and crafts it herself or contracts out. The coffee table, a thick, “live-edged” plank of bleached and whitewashed pine that hovers on clear acrylic legs, was designed and created by Oldenburger. Near the entry, a similar, rough-wood side table, also made by Oldenburger, graces one wall.

In a room known as the “lady cave”—a serene spot to “get away from all the sport,” says the wife—DuBois built a marble-topped hanging cabinet. He also created dining room benches, the master bedroom dresser top, and the sliding barn door covering a closet, all made of 250-year-old found wood. 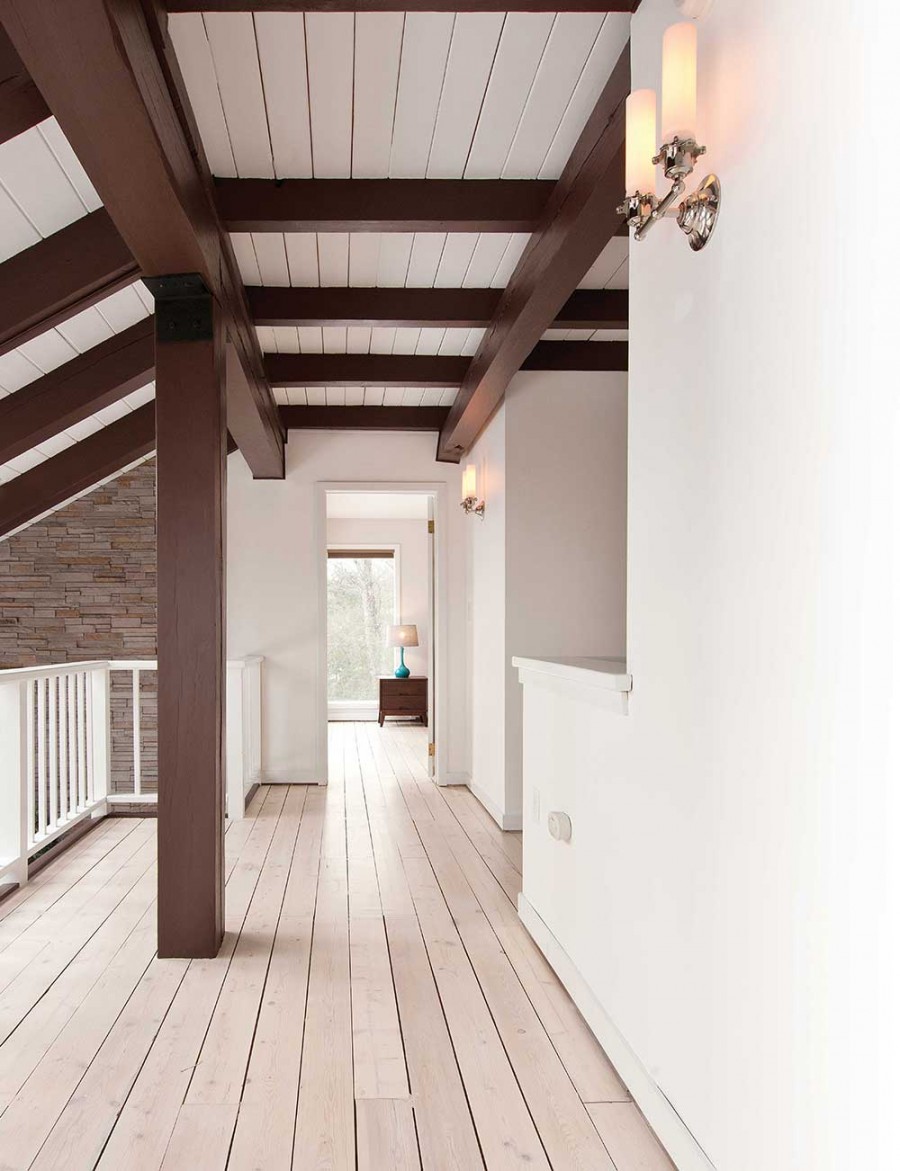 Oldenburger softened the upstairs master suite, previously rather utilitarian looking, with warm gray paint and an upholstered platform bed. Floral capiz pendants light both sides of the headboard alcove. Once again, customized dressers were mounted on the wall to expose the baseboard radiators. Second-level floors were stripped of carpeting and whitewashed to create a clean-but-rustic look. Up another refinished staircase, the husband’s cozy man cave overlooks the vast outdoors. Most of the secondfloor remodeling was done by DuBois, while Luis Nova of Ulster Hardwood Flooring and painter/wallpaper hanger Greg Manuel did work throughout the home.

A fully finished basement, floored in soft, sustainable cork, offers more guest and recreation accommodations, each decorated in creamy tones. The walk-out door to the patio and pool is sheltered by the deck above.

The husband had already renovated the kitchen before he married, but the dining areas were Oldenburger’s to reinvent. She hung a white fauxantler chandelier over an industrial dining table and draped two Windsor chairs that had belonged to the husband’s father with plush sheepskins. They sit at each end of the rectangular piece that’s flanked on each long side with DuBois’s wooden benches. She hung wine-and-glass racks made from stained shipping pallets, and added a modern tulip table for casual dining near an exterior glass wall. Next to it a custom-built, open industrial shelf unit that displays a collection of white dishware.

The ambitious renovation started last spring, with a finish date aimed at Thanksgiving. “We have holidays here, and a lot of people come up in the summertime,” says the wife. “It’s a party place.” The wife has gone from wanting to sell the house, or build a new one, to the dream of being here five days a week. After all, it’s a woman’s prerogative to change her mind.