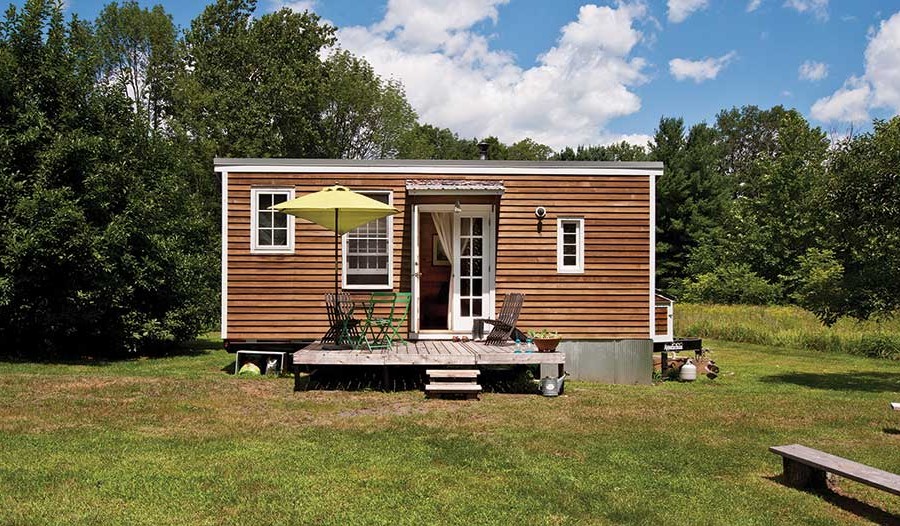 Anyone who’s contemplating building a tiny house needs to known two things: First, tiny houses aren’t always legal. Depending on the municipality, the construction of a tiny house, defined as measuring 300 square feet or less, can violate ordinances enacted to prevent slumlords from exploiting tenants. Some enterprising builders skirt the law by constructing tiny houses on trailer beds and classifying them as mobile homes (which have their own set of restrictions). Others cozy up to officials, hoping for a “don’t ask, don’t tell” arrangement, or simply find somewhere remote enough to avoid inspection.

Second, living in a tiny house means getting rid of most of what you own. 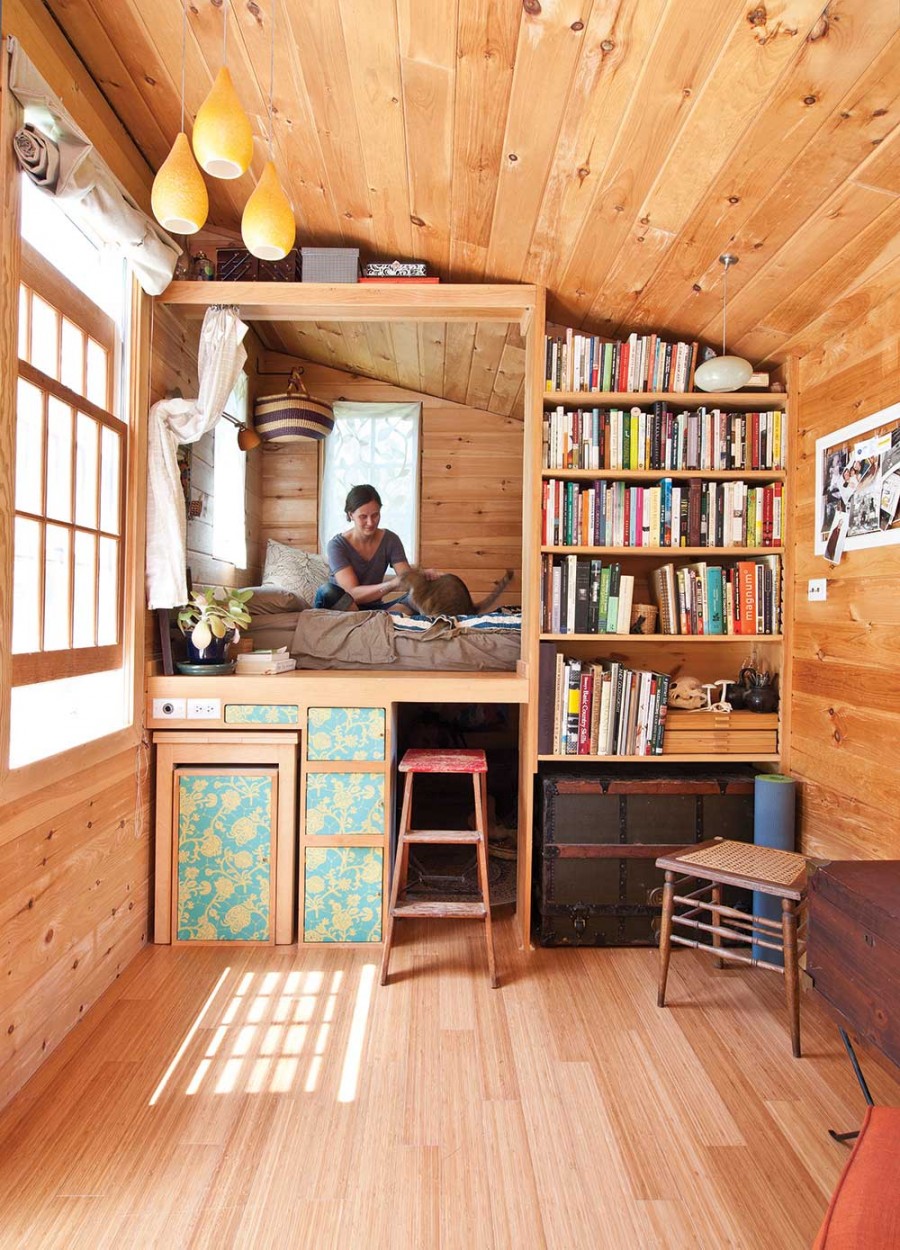 And yet, despite these obstacles, more and more people are designing and building tiny houses, and the number of feeds for them on Instagram indicates a surging popularity. While the tiny house’s charm is obvious- who doesn’t love a miniature portico?- living full-time in one requires no small amount of lifestyle adjustments.

So what’s the big deal with tiny houses? At the top of the list is cost. With a small array of solar panels, tiny houses are easy to run off the grid, eliminating utility costs. According to TheTinyLife.com, a tiny house can be built for roughly $23,000; having one designed and built runs about $50,000. Factoring in financing, a tiny house runs about a tenth of the cost of the average home over 30 years- hence the appeal.

Nobody knows the financial aspect of tiny-house living better than Rowan Kunz. For three years, she’s been blogging about the self-sustainable tiny home she made from a 24 foot trailer, “somewhere in Ulster County.” Her decision to build a tiny house, she wrote in 2012, was inspired by a “lack of desire for a mortgage, and the realization that I am a single 32-year-old who has had to move back into my parents’ house to finish grad school, with no real job or financial security. That can definitely have you start thinking of alternatives.” 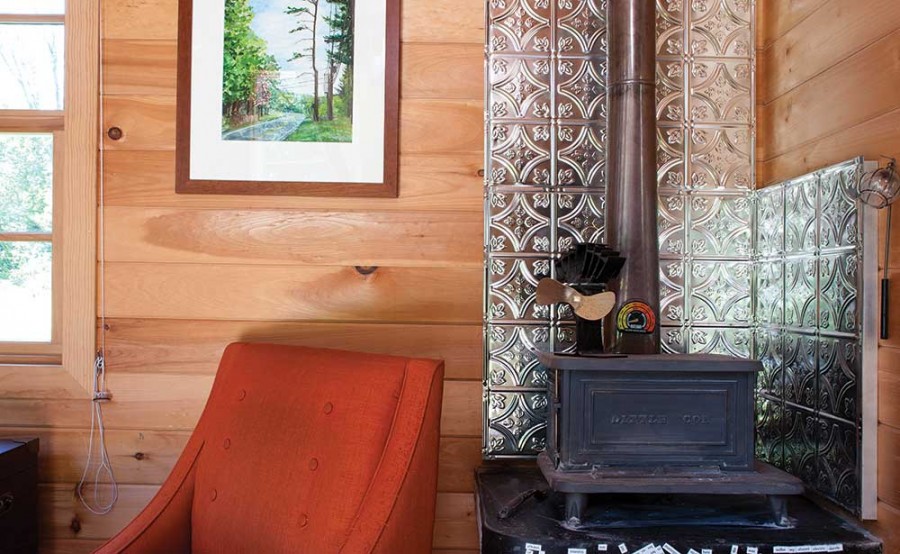 For Kunz, the tiny house “was a logical choice,” which is literally paying off: She became debt free this summer. Yet, despite this obvious benefit, tiny-house living necessitated some big adjustments. “I gave away a bunch of stuff,” she says, and now lives in rhythm with manually operating the utilities she depends on, like heating. Nonetheless, Kunz says, she’s adapted over time. “You change your lifestyle and just be,” she says.

Annette Lindbergh, co-owner with her husband, L.R., of Tiny Houses, Inc., a Putnam Valley-based design-and-build firm, says there are many benefits to “downscaling.” She built her first tiny houses for clients as outbuildings, extra spaces, or full-time quarter. Tiny Houses, Inc., installs green amenities like composting toilets, solar panels, and structural insulated panels. Tiny houses can be made so efficient, Lindbergh says, “you can heat them with a light bulb.”

For Lindbergh, working on a smaller scale also affords a higher level of detail and quality. Her company uses aesthetically pleasing recycled materials like reclaimed wood and antique multi-paned windows as well as rich colors to create houses that are whimsical and often reminiscent of storybooks.

Berkshire Shepherd Huts in Sheffield, Massachusetts, uses reclaimed wood and local lumber to build mobile wooden cabins whose designs are drawn from history: Pastoralists favored shepherd huts throughout the 18th century because they allowed shepherds to follows their sheep in relative comfort across large swaths of property. Today, company co-owner Robin Berthet notes, the huts serve a similar function. “If you have a lot of property, you can experience different parts of it,” he says- including picturesque places where “obtaining a building permit might not be possible.” 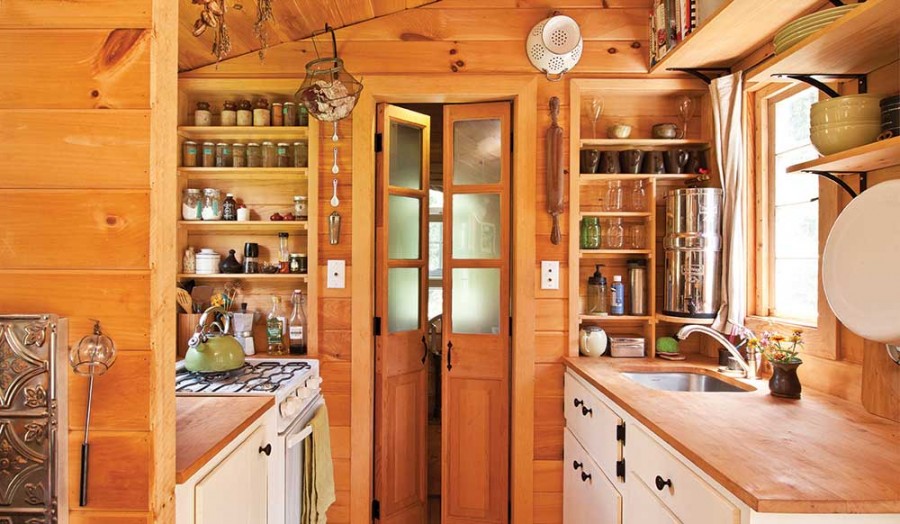 Berthet and his partner, Betty Grinrod, make artfully crafted huts that are modern in style yet evocative of old-fashioned gypsy carriages, for use as outbuildings, guest rooms, and retail spaces, and can include every amenity needed for full-time, environmentally-conscious living, including solar panels, wood-burning stoves, and outdoor showers.

Tiny houses are also gaining traction in caring for the elderly. At ECHO (Elder Cottage Housing Opportunity) Cottages Ltd. in Hopewell Junction, Bob Novak notes, obtaining installation permits can be challenging because the trailer-mounted cottages are subject to municipal regulations about where mobile homes can be sited. So far, convincing municipalities to change their laws in this regard has been an uphill battle. “I just don’t understand the mindset of of the towns that say no,” Novak says. Meanwhile, his client list is growing. The tiny house, he says, is “the most compassionate way to take care of your loved one so they don’t have to feel like they’re imposing on you.”

Tiny houses can offer spiritual benefits, too. Aldo Lavaggi built a tiny house as part of his senior project at Goddard College, Today, his passive-solar, 105-square-foot, trailer-mounted tiny house, which he’s named “the Gold Thread,” is parked in Harlemville, and Lavaggi lives off the grid thanks to help from Chatham-based Sundog Solar. On his blog, Lavaggi writes: “I start to feel the parameters of everything that I own, need, and use…Living here seems to be developing a sense in me for what is essential and non-essential in my life, in a given day or even a given hour.”

But the tiny house’s biggest benefit, says Annette Lindbergh, is that is affords a simpler life- something she’s experienced by making her home in a 1,000-square-foot house with three other people. “Materialism gets scaled back, just because there isn’t a place to put anything,” she says. “It forces you to simplify your life, which can lead to a sense of contentment.” Robin Berthet agrees. “So you won’t have a big-screen TV,” he says. “You learn to take what you need and live without what you don’t.”