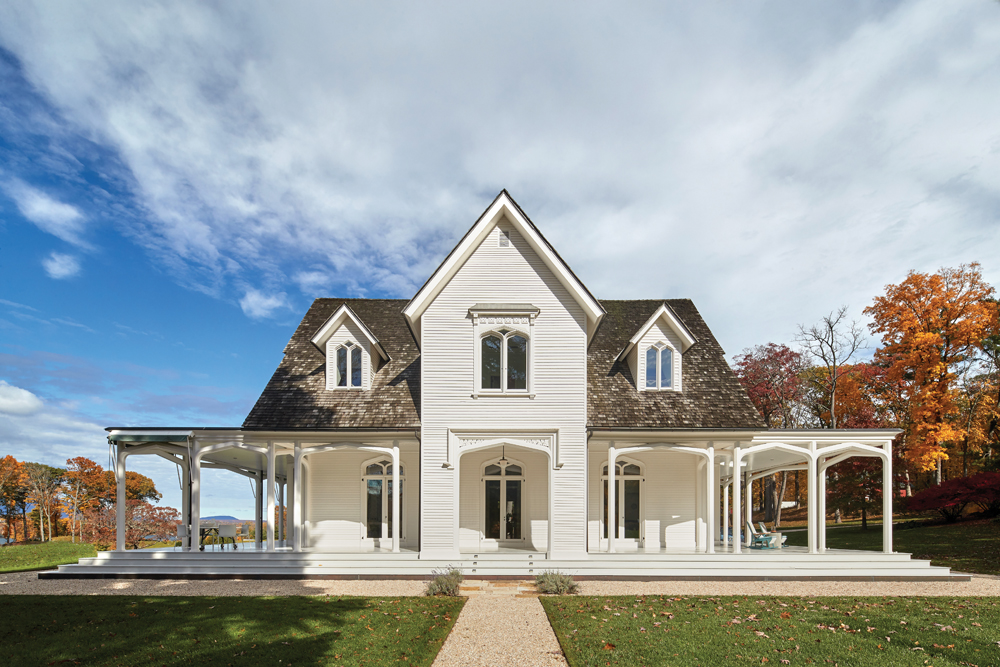 Stained glass, somber hues, and heavy medieval furnishings were interior design fixtures in the heyday of the Gothic Revival style, but that’s not what award-winning designer Ghislaine Viñas imagined when tasked with updating an 1850 Tivoli estate. Instead, she whitewashed the interior walls, coated wooden floors in a glossy ivory, and incorporated pale furnishings and fixtures. Rather than focus attention on a darkly hued interior, the white walls dramatically shift the focus to views of the neighboring Hudson River and frame the home’s surrounding acres in their shifting seasonal colors.

Built during the height of the Gothic Revival fervor, the home was originally owned by Eugene Augustus Livingston, who named it Eversleigh. In 1923, new owners Howland Davis and Laura Livingston renamed the property Teviot, after a river in Scotland. When Rolling Stone founder Jann Wenner and his partner Matt Nye purchased Teviot in 2006, they engaged architect and designer Sam Trimble to renovate the property, which included extending a porch around the house. Viñas’s clients asked her to look at the house in 2018 and she immediately fell in love with it. The house was in great shape and needed little architectural alteration. 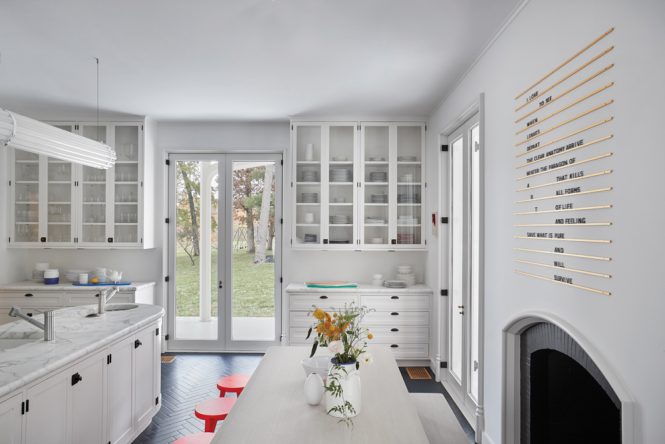 “We really didn’t do very much at all,” says Viñas, who worked alongside her team of Zoe Hsieh, Natalie Kean, and Lauren Mercuri on the project. “No sheetrock was taken down or put up. No bathrooms were altered, the kitchen was kept intact.”

The home did require a fresh look. While Viñas thought the existing muted beige walls were beautiful, they did not align with her vision. “We dabbled with trying to put up toned walls, but ultimately decided to whitewash and it was definitely the right decision,” she says. “Because it gives it such a fresh, fresh, beautiful look. So, that’s really the main thing we did. The house came with the same linen oatmeal curtains and a lot of very thick woven sisal rugs. That was kept in place.” 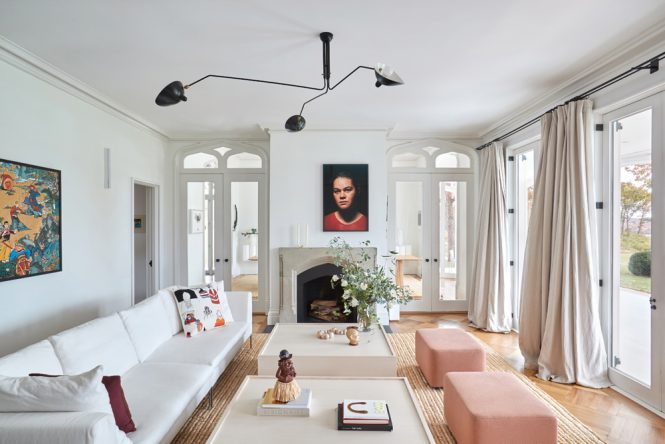 Art in the living room includes a Roberta Thornley photograph over the mantel and a piece by Jacky Tsai over the B&B Italia sofa.

It’s not as if Viñas dislikes colors. Quite the opposite. She has drawn inspiration from colors since childhood. “Opening a box of crayons just filled my heart,” she says.

Viñas is known for her colorful award-winning residential and commercial projects, as well as the stylish products she creates. Those products include fanciful wallpaper designs for companies such as Wolf Gordon and the Brooklyn-based Flavor Paper, plus textiles for HVF Textile. In the Tivoli house, she chose white walls not only because they showcased the structure’s clean architectural lines, but also to serve as a background for the clients’ extensive art collection.

“They have their finger on the pulse in the art world and they love collecting,” says Viñas.” Every now and then I get to share something, but it’s absolutely their collection.” 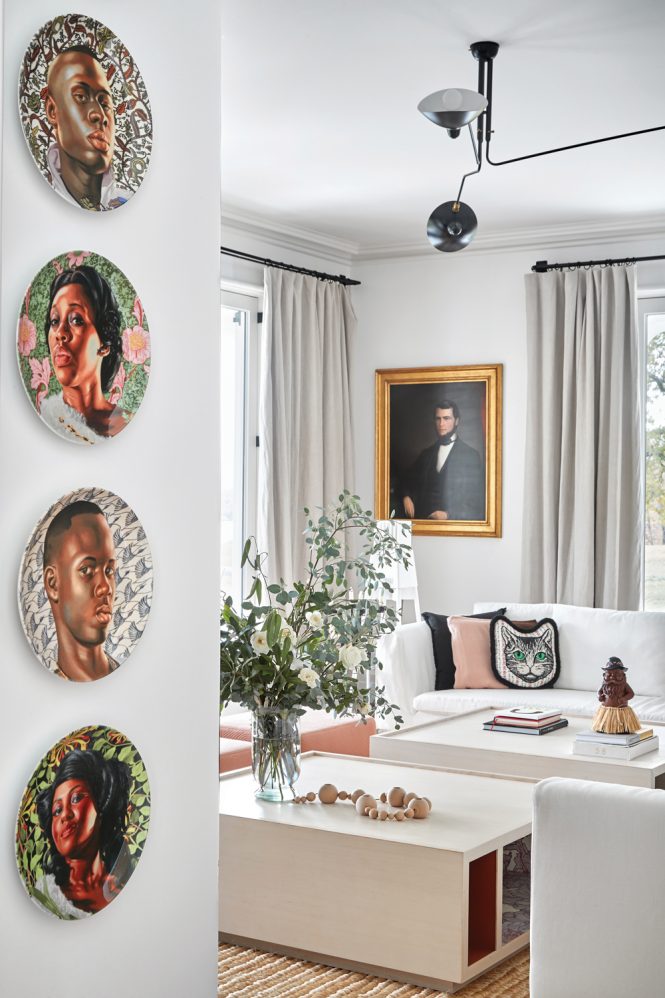 The white walls also provide the perfect contrast for the often whimsical colorful design elements Viñas chose to feature. An aqua deer head sculpture is placed on a wall next to a Gothic window, a life-size black pig sculpture serves as a table base for the entrance, painted red Victorian chairs feature seats with cat images, a black bunny serves as a lamp base, and a bird’s head sculpture pokes out of another wall. The animal heads are reminiscent of the taxidermied heads that might have graced the walls in an original Gothic Revival home, only no actual animals were harmed in the process. 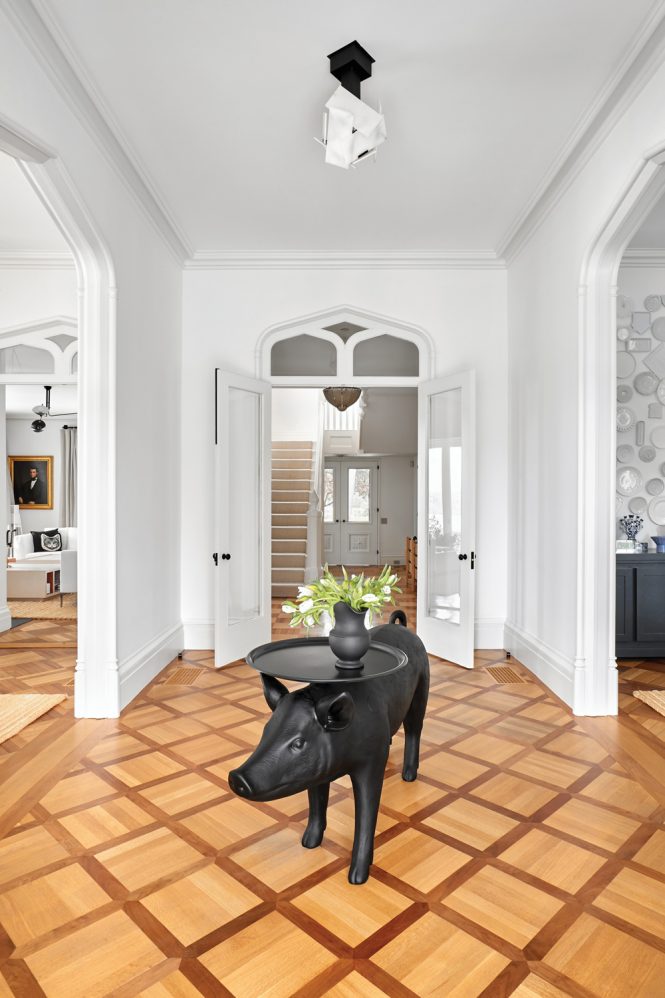 The entry greets guests with a black pig table by Moooi The staircase runner is from Aronson’s Floorcovering.

“In their New York home they have the horse version of that pig table,” says Viñas. “So that was an easy go-to. The deer head was something we already had from a previous house. The bunny lamp is from Front. It’s something that we bought. I don’t know why I designed with so many animals. It was definitely part of being out there, but I’m just naturally drawn to animals. I didn’t even know this. People do stories on me and call the project Animal Kingdom and I’m like, whoa, I didn’t even realize that.” 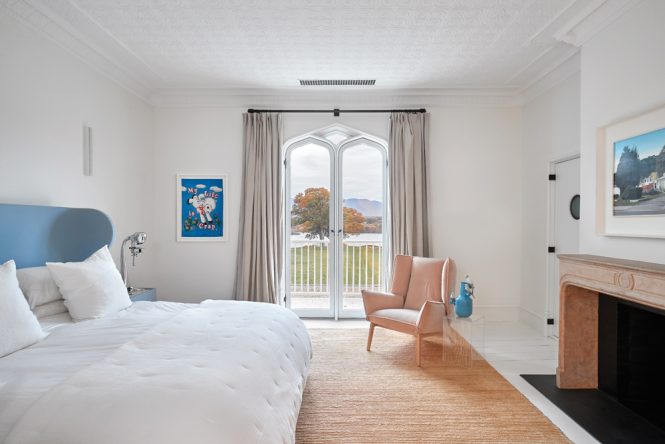 The bed is custom designed by Ghislaine Viñas, upholstered in Holland and Sherry’s Ellie fabric in Sail Blue. The chair is by Ligne Roset. The room features artwork by Geoffrey Notman and Magda Archer.

Her creatures do make the house seem as if animals just wandered in and settled down, which would not be inconceivable given the surrounding wooded acres. Except that her creatures are fanciful and vividly colored.

“There’s just something lovely and charming and engaging about incorporating animals. I am really into animals and adore them.” 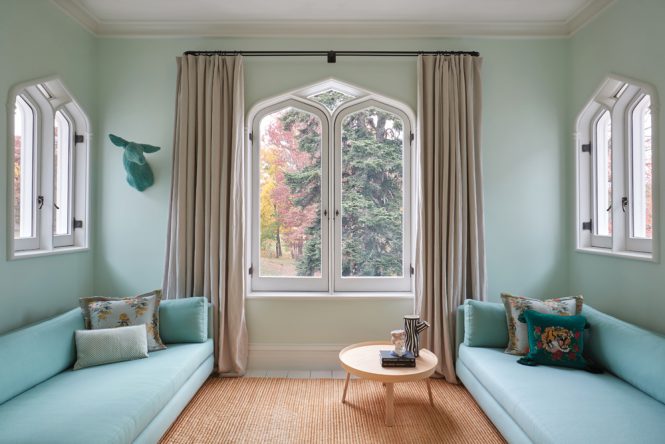 Viñas, who was born in the Netherlands and spent part of her childhood in South Africa, is drawn to what she sees as a Dutch aesthetic, especially when it comes to design. Both she and the clients favor the furniture of Dutch industrial designer Hella Jongerius. “In the piano room there’s a blue sofa called Oval Sofa by Hella Jongerius,” says Viñas. They loved that sofa. They had a green version of that sofa before. They love that sofa and I love that sofa, so we kind of knew we were going there. That piano room is one of my favorite rooms. It actually has a lot of Dutch design in it.” 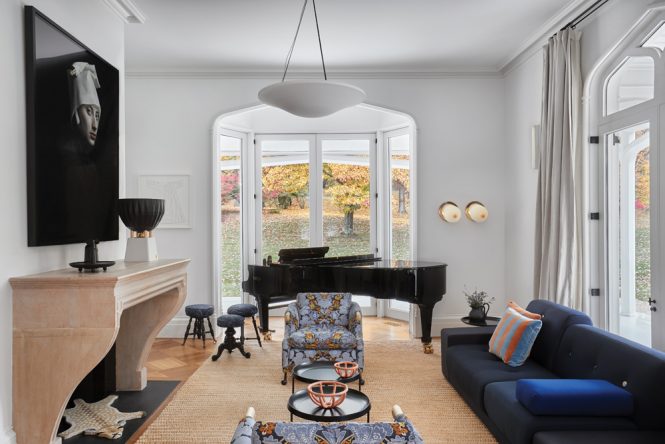 The piano room features a Polder sofa from Hella Jogerius.

“There’s a lot of Delft-y kinds of Dutch aspects in it. I think that the blue of the sofa kind of led me to that, but it also has three vintage piano stools that are covered in navy blue Hermes scarves that are actually from the clients. They are from New Zealand and the scarves are patterned from traditional Maori patterns. It’s a lot of bits and bobs that pull it all together.” 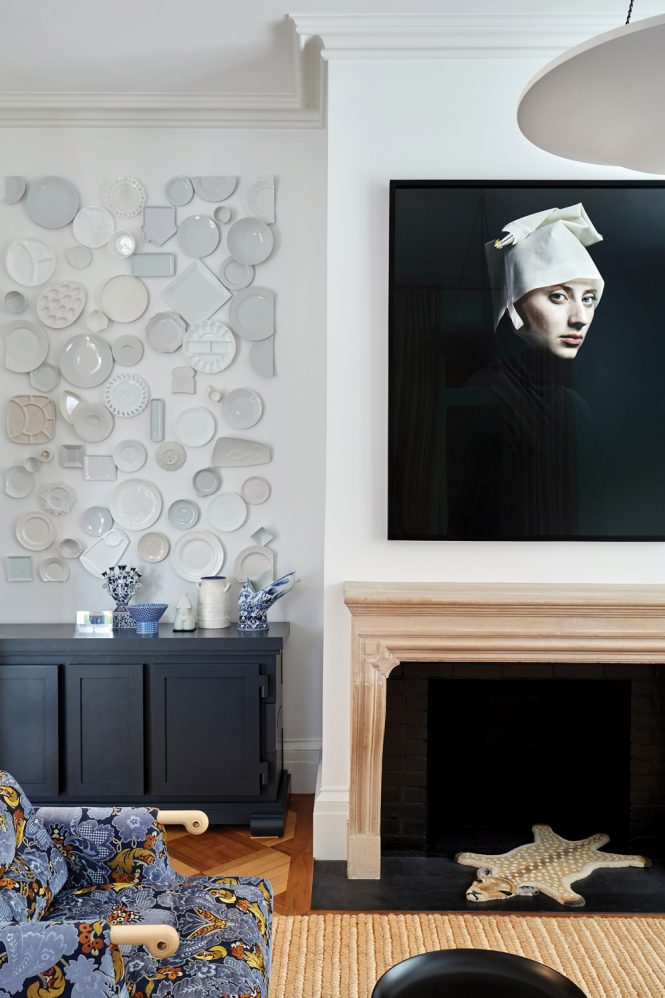 One wall is decorated with a collection of plates. In its day a Gothic home might feature a plate collection imprinted with colorful transferware, but these unpatterned plates glow in subtle pastel tones.

“We’ve done many of these plate collections for different clients,” says Viñas. “We did one in New York for these clients as well. It seemed to me that whatever I put next to the very, very haunting and beautiful portrait on the fireplace, also by a Dutch artist [Hendrik Kerstens], it couldn’t contain a lot of energy, so it was the perfect place for one of those plate installations.” The TV room has a plush Clic sofa. Art by Raymond Pettibon and an Apple Art print by Andy Warhol adds color to the space. The coffee tables are Muuto.

The client loves collecting plates, says Viñas, so it was fun to undertake such a personal project. “It definitely is a nod to traditional plate hangings that you might find in a Gothic Revival house. We’re always twisting things around and trying to look at new ways of doing old things.”

While incorporating elements of surprise and discovery, Viñas’s main design focus was to promote a peaceful calm. “I definitely wanted this house to be a lot quieter and more sophisticated,” she says. “I knew that their art would bring a lot of energy. So, a lot of the house is very calm and subdued, especially for me. I  was very happy at that time to work in more subdued tones and not as many bright colors. I know for some it might be energetic, but for me it is quite peaceful in many ways.”

The design process was very collaborative. “It’s not a sort of ‘a-designer-coming-in-and-waving-a-wand’ process and then the client showing up and saying, ‘What is this?’ They are design junkies. They love design. They love having a home that feels very unique to them.” A Gucci wallpaper encases the attic bedroom. The “I Love New York Catskills” poster is by Milton Glaser. A light by Horne sits atop a Tom Dixon table.

Viñas is currently revamping a bar and small hotel in Philadelphia. While her firm mostly does residential projects, Ghislaine Viñas, LLC, also engages in bespoke commercial design. “We’re good at creating environments that feel very special and very different,” she said. “There’s always a story. There’s always a history that we’re following or a narrative that we’re creating for the project. There’s always stories behind everything we do and sometimes the stories are evident and sometimes the stories are much more subtle. The commercial work does allow us to be kind of theatrical, and maybe sometimes a little bit more blatant, but it’s the same process for us, it’s not widely different.”

When asked to sum up her design ethos, Viñas cites a simple concept: happiness. 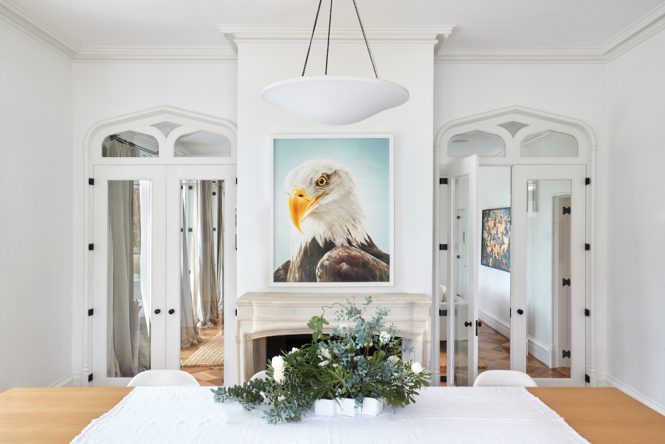 “I think that the work that we do is really based on the aesthetics of happiness, creating spaces that feel good. You don’t know why you feel good when you walk into them, but they do just simply make you feel calm or energized or happy or make you smile or make you feel at home or welcome or anything that gives off good vibes. This is something I want to do. It just comes very naturally. Just to feel happy and content and very good in interior spaces.”