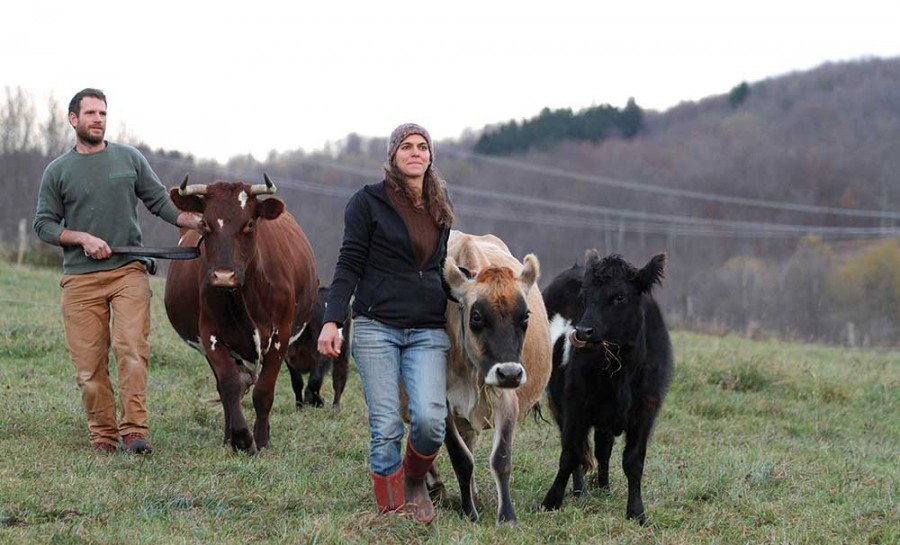 The approach to Dan and Kate Marsiglio’s home is unmarked except for a wire wheel rim, painted red and nailed to an otherwise blank sign. It leads deeper into a rise, separating new fruit trees and a garden on one side from pastures on the other. There, snuggled into the folds of hills outside Walton, New York, is Stony Creek Farmstead, a working farm and farm-stay operation owned by the Marsiglios, and the site of their seriously environmentally friendly house. Situated above Dan’s parents’ farmhouse on the same land, the two-story structure is a rustic work in progress that has caused a stir among sustainable-practices groupies for its combination of experimentalism and idealism.

The Marsiglios seem to be in constant forward motion, managing the household and farm together, dealing with ongoing construction details, and checking in with Dan’s parents’ house, where their kids do their home-school work. They may be young—in their 30s—but they’re not naïve about the work their endeavor requires. Introduced to Buckminster Fuller’s ideas while at Syracuse University, Dan is firmly rooted in design concepts that measure structural integrity on all fronts—material, environmental, and communal. “Green design focuses on the inputs and outputs, not only on local impacts, but on a global scale; everything factors in,” he says, echoing Fuller’s forwardthinking worldview. 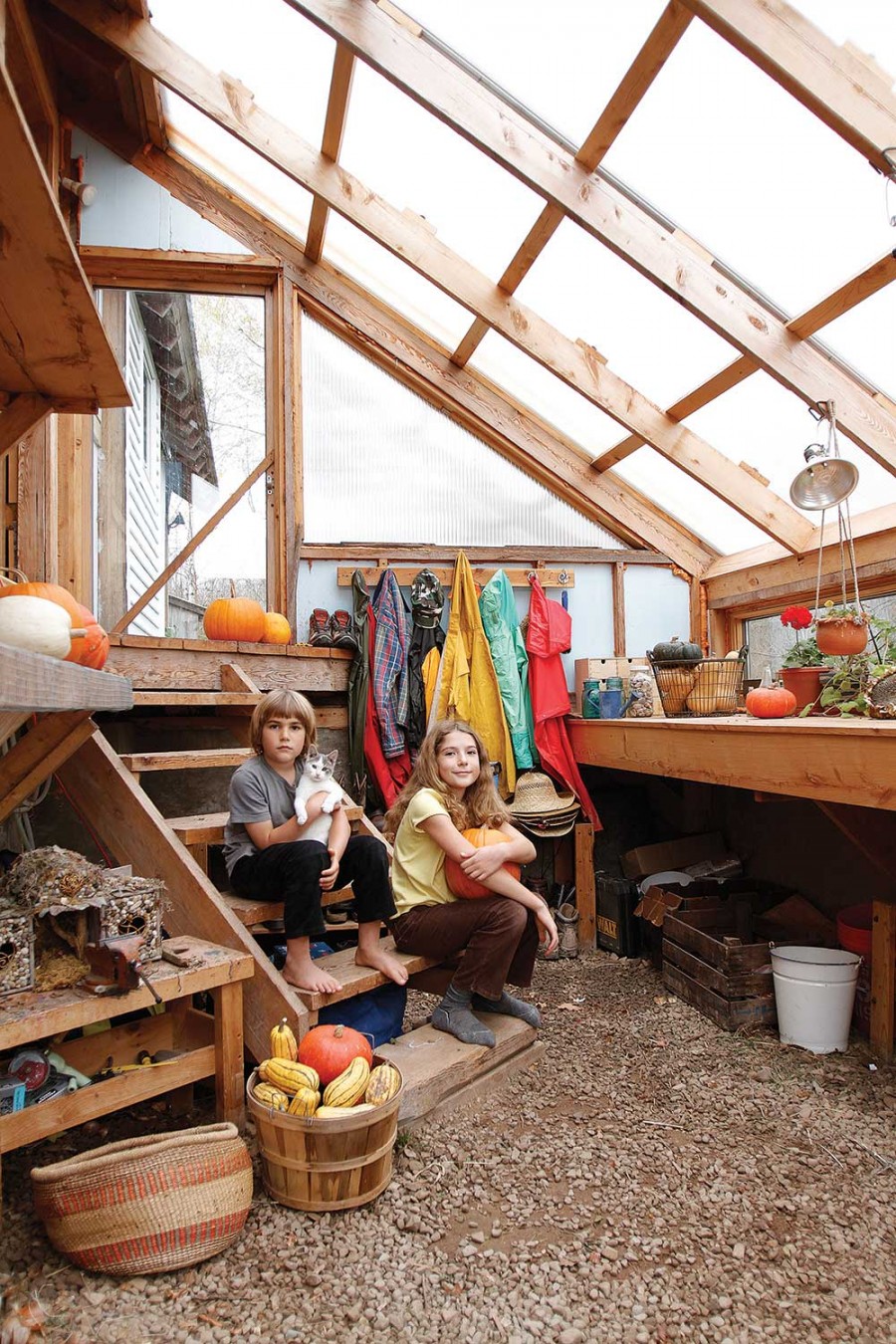 A rustic work in progress that has caused a stir among sustainable-practices groupies for its combination of experimentalism and idealism.

Built in a bolted, post-and-beam style with rough-cut hemlock that was procured 85 miles away and milled by a three-man crew in a tiny sawmill even closer, the Marsiglios’ house fits Fuller’s definition of integrity: strong, whole, complete. They’ve been careful to avoid using composite materials, such as plywood or chemical-based adhesives and paints that offgas toxins.

The house is a paragon of energy efficiency. Passive-solar, built into a southfacing slope, it takes  advantage of shade from tree cover in the heat of summer and the warmth of the sun in cold weather. An active solar panel on a hillside to the north hooks up to the grid for trickle charging in inclement weather. “We used to use a gas generator during the winter,” he says, explaining that if the sun doesn’t shine for weeks at a time, it doesn’t matter how many solar panels you have—it’s never enough in this region of the country. Folks who want to run off the grid in the Hudson Valley either need hydro, wind, or gas, he explains. Instead, Marsiglio says, “we trickle charge to keep the 200-pound, deep-cycle batteries topped off.” 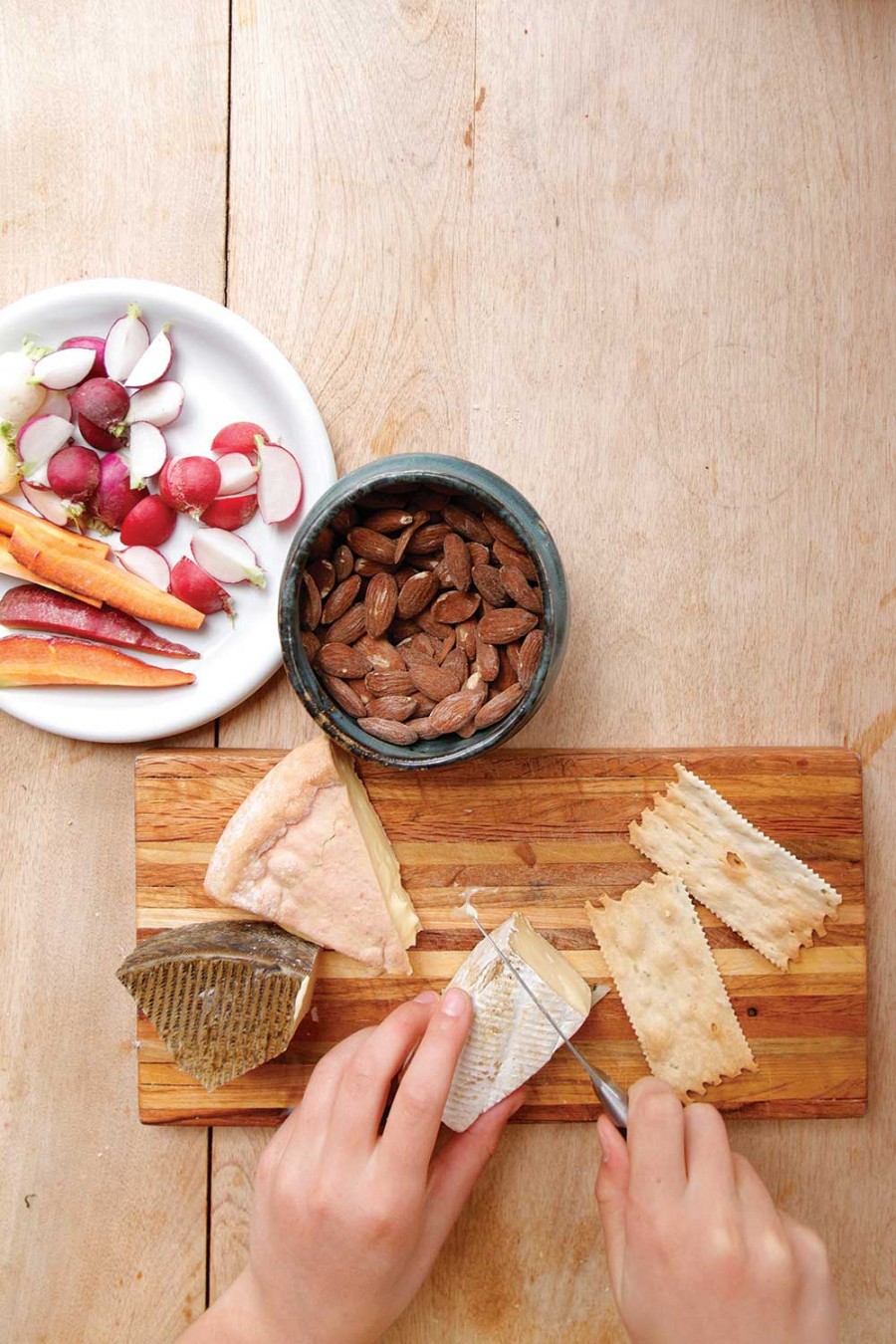 An entryway doubles as a greenhouse and is recessed four feet below ground level to retain captured heat. Embedded in its concrete walls is PEX tubing, through which wood-heated water flows to radiate warmth into the space during sunless seasons. From the greenhouse, a staircase leads to the bright kitchen and living room, which are flooded with sunshine streaming in from above. The many  skylights are constructed of thick-corrugated polycarbonate, an almost indestructible material used in commercial greenhouses. A central woodstove augments interior temperatures during the winter, and warm air flows freely to the second-floor sleeping quarters.

The Marsiglios have also designed an ingenious answer to the HVAC system. An exterior wall slides away to expose the whole kitchen, floor to ceiling, to the outdoors. “The wall is built on a rail, like a sliding barn door,” Kate explains. While glass walls are all the rage in what Kate calls “fancy houses”, she maintains that “glass is inappropriate for this region. You need the ability to close up your house and have it be cozy.” It evokes the feeling of a clubhouse, one hand-built of salvaged wood and outfitted with superefficient appliances and the latest IKEA amenities.

Green design focuses on the inputs and outputs, not only on local impacts, but on a global scale; everything factors in. 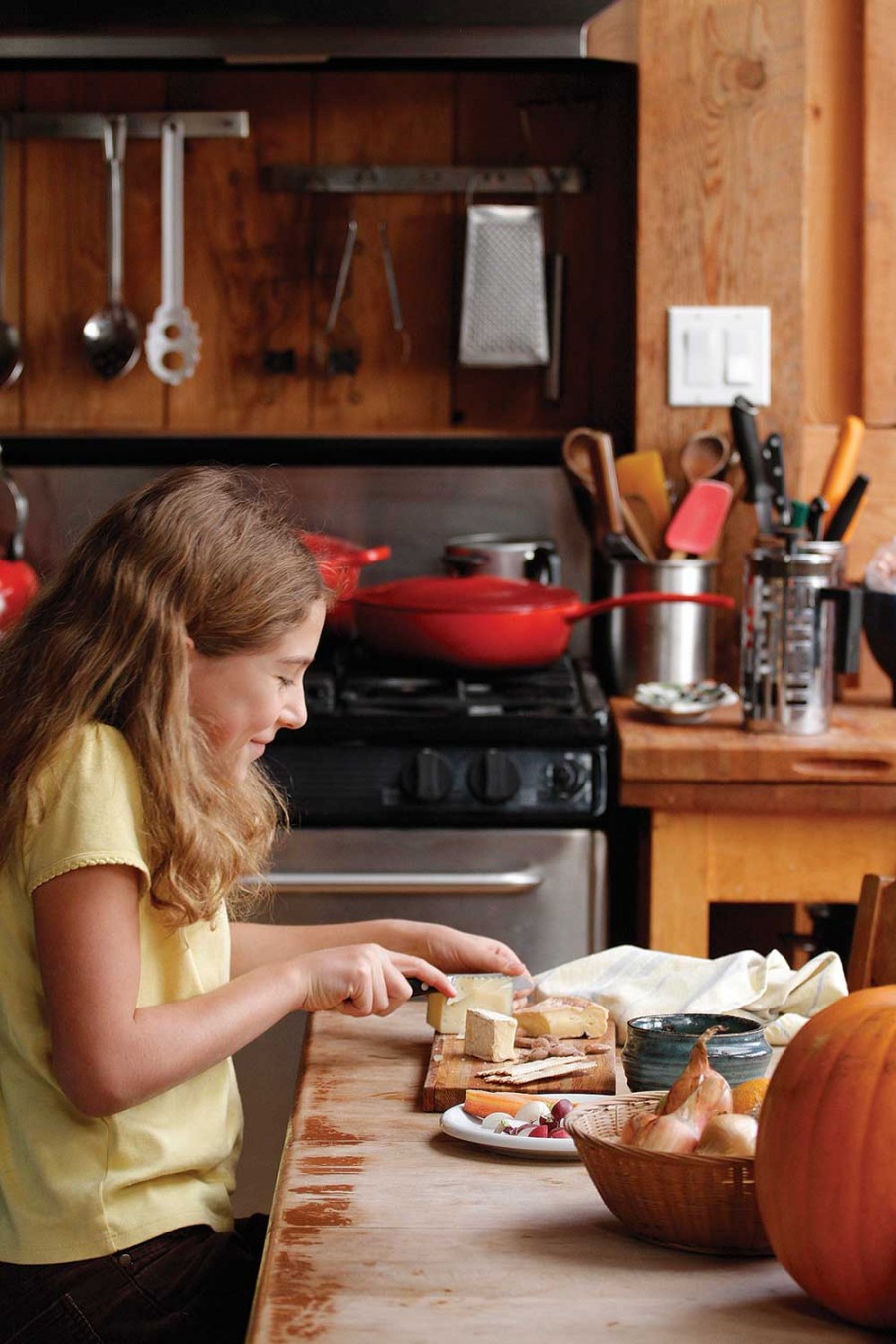 Since the Marsiglios strive to impact the environment as little as possible, they operate with higher building standards than zoning codes require. Reuse is important to them, so they’ve repurposed some building materials from other structures; the interior walls in the bathroom and mudroom, for instance, are tongue-and-groove pine from a disassembled silo. The bamboo flooring in the living room didn’t grow wild along the creek, though. “This is my one Walmart purchase,” says Dan. “It came on a truck one Christmas, and I kicked everybody out to install it.”

The couple and their two children have occupied the house for six years through various stages of its evolution. The latest, the completion of a twostory section that will double the living space, is now under way. The north wall of this area, made of concrete and embedded with PEX tubing, will be bermed with earth from the hillside to help retain heat in the frigid months and provide coolness in the summer. Most homes are insulated by a “frost wall” around the basement, but their concrete wall will rise four-and-a half feet above the floor level, effectively creating a basement on half of the first floor. “Being subterranean on the north and east will help to moderate temperatures,” says Dan. “It

might be possible to run cold water through the PEX to cool the space in the summer, too.” Above the concrete, he plans to use densely packed cellulose to insulate the wood-framed walls, while the original section of the house was insulated with chemically inert Icynene spray foam, which has a lower R value than polyurethane but doesn’t offgas into the house. 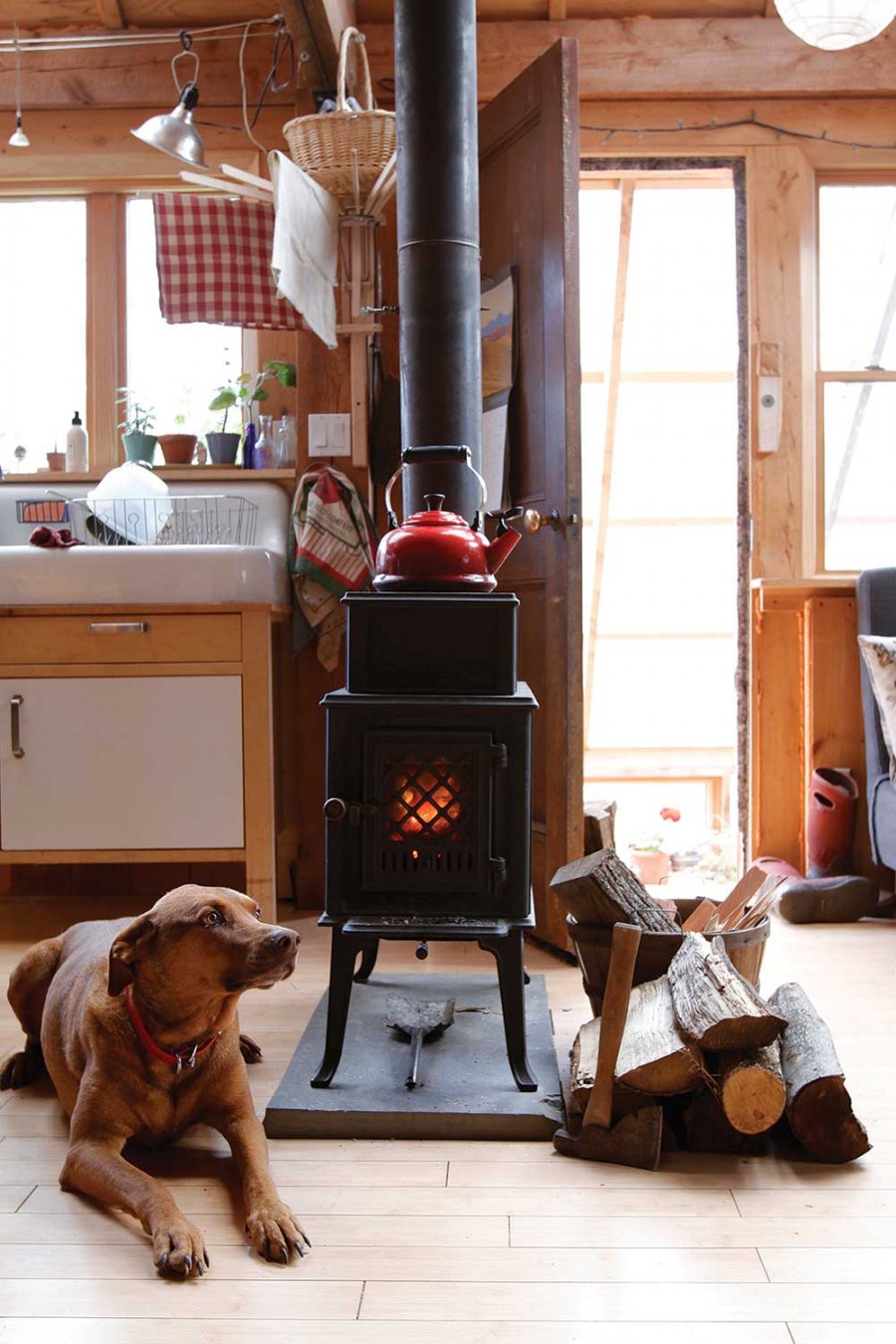 The Marsiglios’ vision extends far beyond the walls of their home. Their mission is to implement a philosophy and create a functioning example for sustainable living. They produce most of their own food and enough extra to sell locally through a CSA. They offer “art farm” camp to kids from five to 14 years old, to supplement their income and educate the next generation of farmers. The Marsiglios want to figure out how other people can work to build a house, grow some food, and bring members of the community in. “This need not be some anomaly,” Dan says. While he’s glad that many people have become interested in growing organic food and backyard farming, he believes change has to go further than keeping a handful of chickens. “Hobby farming is not a model that can be replicated for full financial solvency,” he says.

“We’re a full farm. We keep sheep, cows, pigs, chickens, guinea fowl, turkeys, and bees,” Kate says. “Our goal is to show people what a model sustainable farm looks like.” A solar shed beyond the house’s deck shelters over 100 laying hens through the winter and gives them outdoor access. Livestock is raised according to the method of Joel Salatin—a renowned farmer made famous by Michael Pollan’s book The Omnivore’s Dilemma—which rotates animals on pastures of healthy grass. Flocks of fowl are moved in behind the cows and sheep to peck through the dung and eat protein-rich fly larvae while fertilizing the field with their droppings. Clearly, living the dream takes a lot of hard work.

Stony Creek Farmstead is also a farm-stay camp, currently managed by Feather Down Farm Days, a Dutch company that arranges a B&B-like experience for visitors to stay in charming tent-cabins on farms. A gravel path leads pedestrians along a picturesque creek bed where five tent-cabins are situated. A shower house and outdoor wood-fired oven provide amenities for campers. The Marsiglios have hosted more than 300 guests from all over the world. 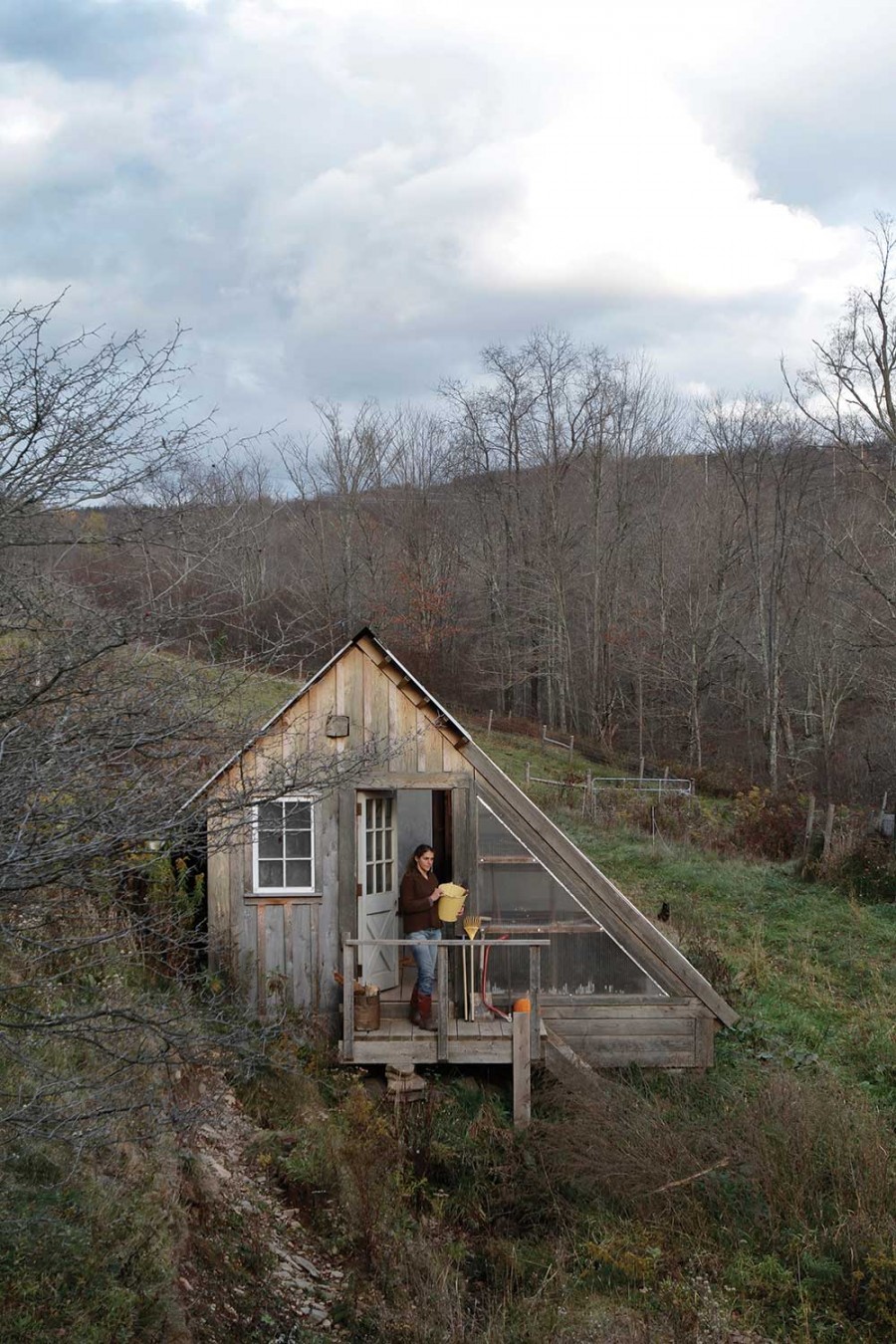 “We were the first American farm to do this,” says Kate, mentioning the challenges of setting up tents with flushable toilets and running water, in compliance with the New York City DEP. She says the farm-stay business and the educational programs they offer do draw them away from strictly farming, yet family and community are important to them. “We try to keep the other pieces small enough so they’re manageable, but large enough so they work in concert together,” she says. “We could be a more successful business and make more money if we didn’t take time to spend with our parents and our kids.”

Scrambling to get the house enclosed before the snow flies, Dan talks about future plans—another earth-bermed section with a sod-covered roof, perhaps. Meanwhile, he dreams of using the hillside to generate hybrid hydromechanical energy. “It’s basic physical science, to turn the potential to kinetic by using the stored energy of water at elevation,” he says, adding, with a laugh, “or maybe we could do everything with an old water mill. We could mechanically run any device that just needs to turn—our coffee grinder, our mixer. Maybe we’re just optimistically ambitious. Someday, when I get the time to experiment, I’ll figure it all out.” 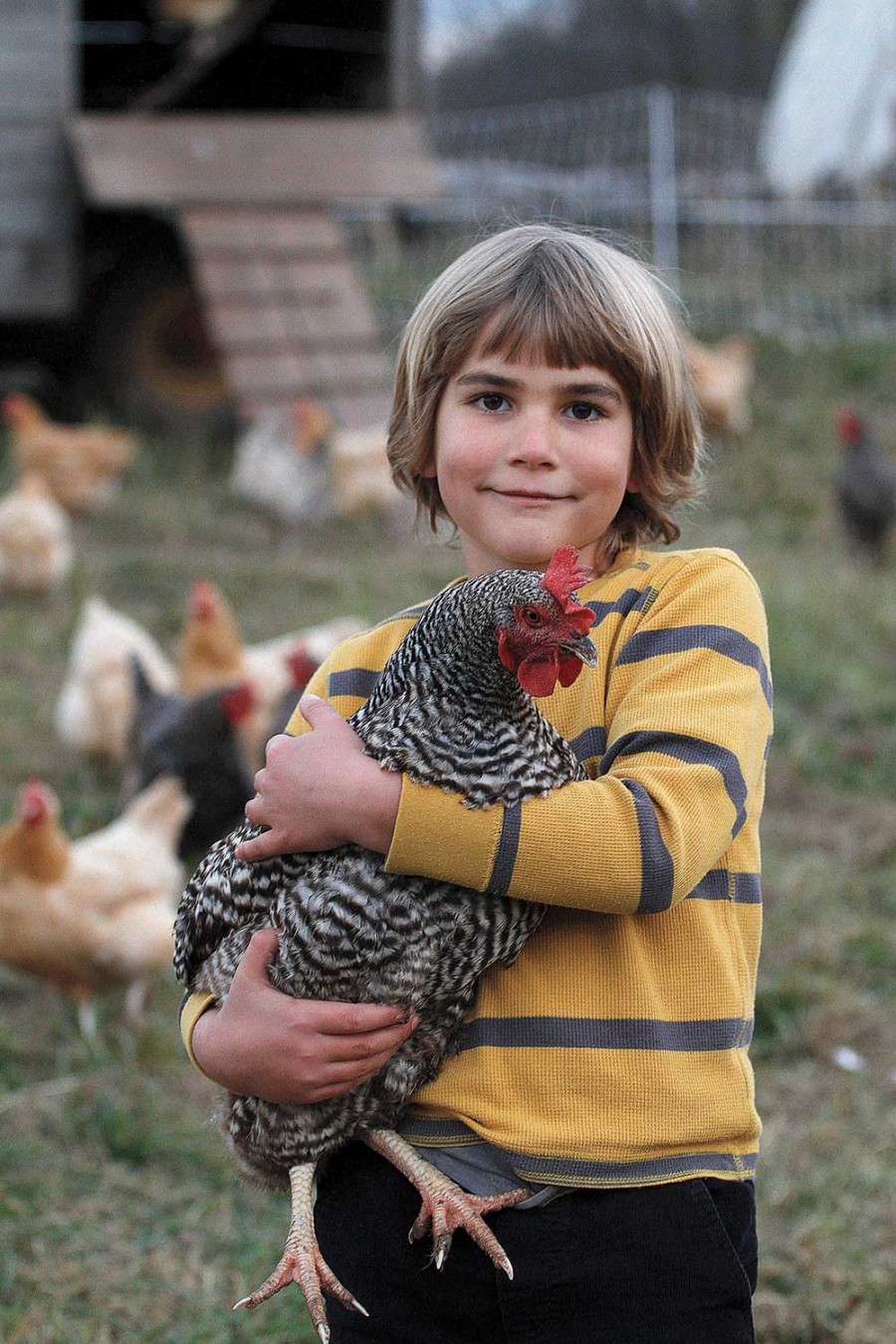