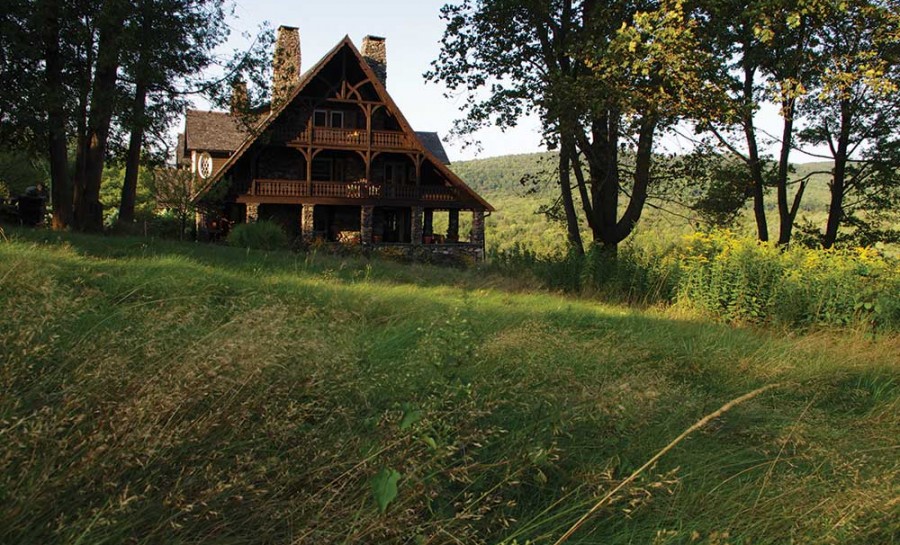 The romantic potential always exists in older homes; decades of human drama can’t help but leave a trace. But some fortunate homes are blanketed in a fine mist of romance, a perfume that lingers over everything around them and lasts even after you’ve left. Nehapwa, a historic Arts and Crafts-style estate snuggled in Tannersville, is just such a place. It was built as a summer home in the late 1800s. In the 1920s the house was sold to an editor for the New York Times. It was later sold again and, as with many beloved summer homes, benign neglect began to take its toll. It stood empty for a year and a half. Until the romance bloomed anew.

Route 23C curves up behind the main road from Haines Falls to Tannersville. It was, according to local lore, the path the Iroquois took into the hills each spring. Hundreds of years later, well-heeled businessmen and artists summer along that road, attracted to the pure mountain air and spectacular vistas. Nehapwa (or Napeena Gardens, as it was first known) was built for Philadelphia businessman George Roberts. Designer George Reid, the Canadian artist and architect responsible for 20 other structures in the area, was a member of the Arts and Crafts school, a movement that demanded that all designs, no matter how grand or how small, contribute to a community’s beauty. After moving into Nehapwa in 1892, George Roberts served as president of the Onteora Club, a summer artists’ community headquartered across the road. Famous artists, musicians, and writers gathered each summer and Nehapwa’s own 14 acres grew to include a massive studio building for Roberts’ daughter, artist Elizabeth Wentworth Roberts. Current owner Jeff Summer first found the area when visiting friends who had a home there. “I was in New York for three years and all I was doing was working, as one does,” he says. “I had no concept of Upstate.” Summer was “blown away” by the area’s beauty. He wanted a piece of it for himself. 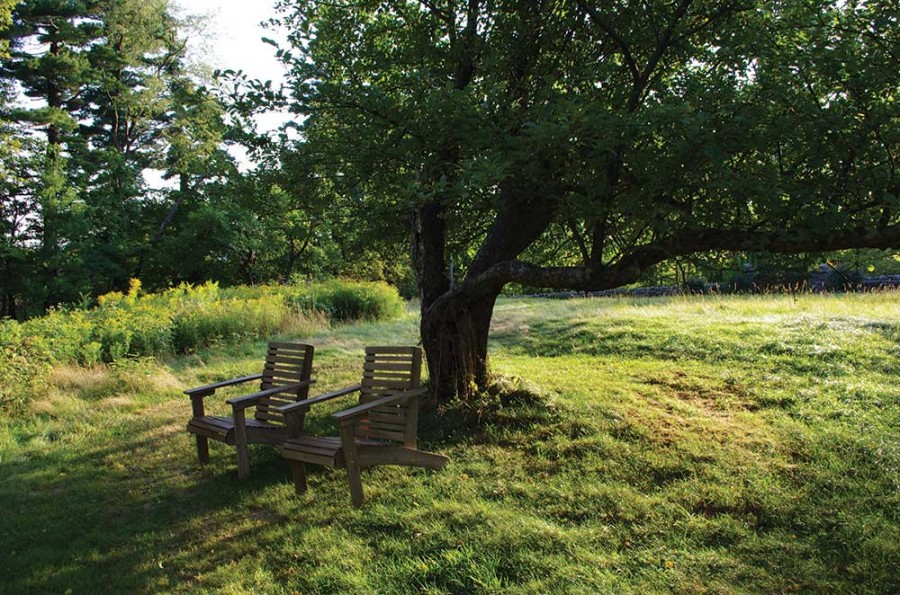 Summer says the massive brown house choking in overgrown vegetation called to him. He could see that the classic lines and the sweeping mountain views were  irresistible. “The back of the house looks due east,” he says. “So the sunrises and the moonrises here are just magnificent. I lusted after that house, which is very dangerous. I knew I would do whatever it took to get it.”

But it wasn’t for sale.

And then a friend offered to introduce him to the owners. Businessman Elias Sayour and his wife Janette had owned the property for years. Their six children inherited it, and although they loved it dearly, the house was, in essence, abandoned. It took nine months to get all the heirs to agree to sell. “I even had to fly to California to meet one of them,” Summer says. “It wasn’t the money. They just wanted to be sure it would be sold to the right person.” 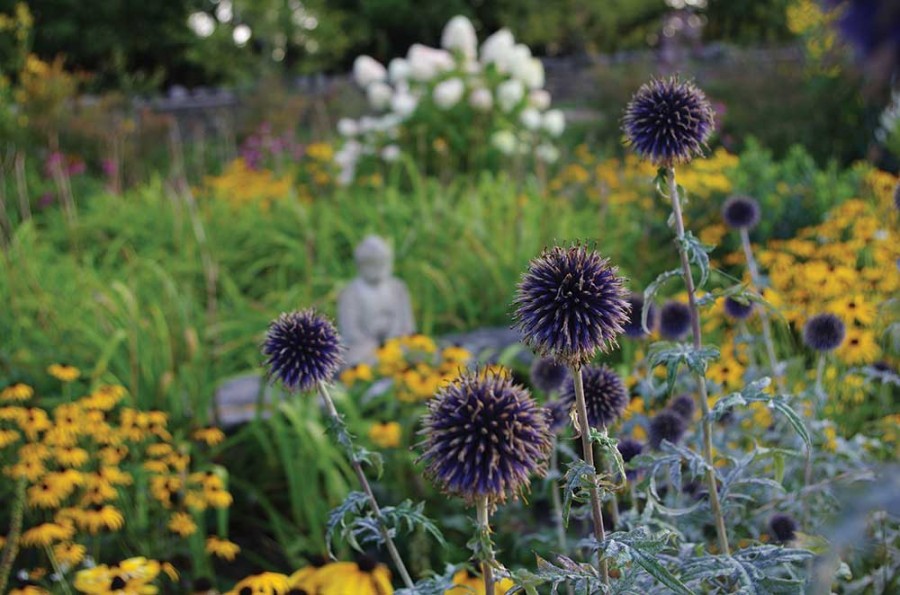 The house Summer finally bought was in a sorry state.

“It was falling apart. There was a leaking roof, broken pipes, animals in the chimney,” recalls Summer. “I’ve done construction all my life, but this house has taught me the difference between construction and renovation.” Summer did the demolition himself every weekend. There was a parade of dumpsters; he estimates 20 or 30. “The room that is now the library was covered with 1970s paneling,” he says. “Every other wall had old wallpaper and woodwork buried under high-gloss white paint. Underneath that cheap paneling was gorgeous wainscoting. I was determined to uncover the original house and let it breathe. One workman spent all winter stripping the fireplaces in the bedrooms. We found that each one is done in a different style.”

He found a 1922 Country Life magazine article about the house and kept it for inspiration. Summer kept going every weekend, driving up from the city, tackling one enormous job after another while the house continued to throw challenges at him. And one day he finally broke down. “I went to the third floor, where I hadn’t been working, and there was water coming through the roof,” he says. “The sheetrock was falling off. I was completely overwhelmed. But then I made the decision: ‘I’m not giving up; I’m going to figure out a way to do this.’” Summer adopted a strategy, systematically addressing the house’s issues from the top floor down. He created an idea book, where he pasted photos of the dark rooms with painted woodwork and 1940s-era wallpaper, and opposite them he pasted magazine pictures of his ideas for what the rooms could be. 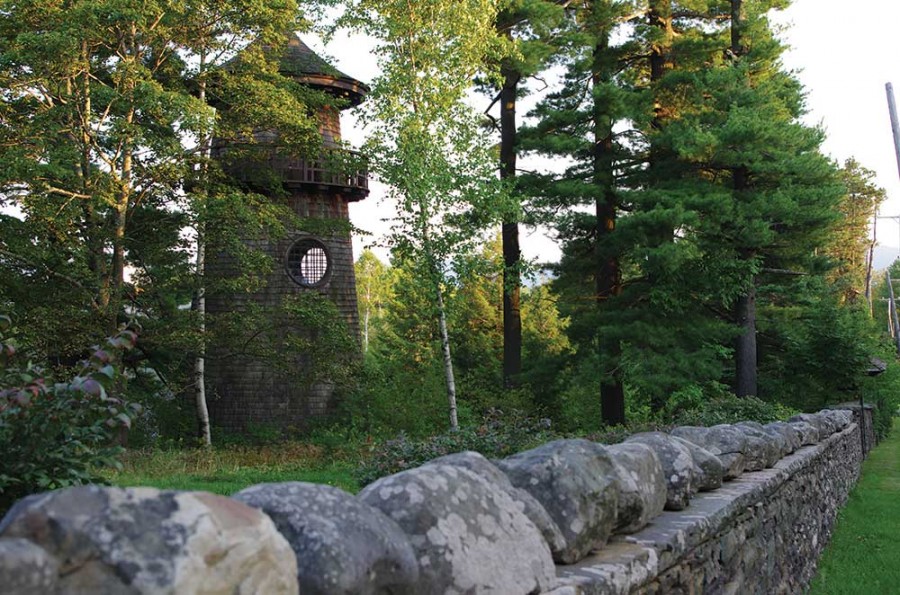 Seven years later, Nehapwa is a gracious, grand bed and breakfast with a classic, muted color palette, and room after room of gleaming woodwork. There’s a totally modern kitchen and a separate scullery and bakery. There’s a living room with windows looking onto the wraparound porch and a library overlooking the perennial gardens. Each of the four guest rooms has a covered sleeping porch as well as its own private, modern bathroom. Situated in each corner of the second floor, the rooms are connected by a gallery hallway that opens to the living area below. Summer’s office occupies the room in the center of the back of the house, featuring the view of the mountains which drew him in from the start. The third floor, the place where Summer almost lost faith, is now the owners’ living quarters. Summer proudly admits that the riotously colorful flower gardens are his personal obsession. The property extends into a pine barren and a former orchard to one side and to the studio past a Victorian-style wooden water tower on the other. The back yard is a gradual slope, with the mountains beyond. “Nehapwa is a derivative of the Iroquois word for ‘to find again,’” Summer explains. “That seemed like the perfect description of not only this place, but us.”

On a perfect late-summer day, Summer’s partner, Tom Uberuaga, proudly points to a beautiful little stone-rimmed pond that drains into a hand-laid stone-lined streambed. “I found that when I was cleaning out the weeds yesterday,” says Uberuaga, who manages the estate. The couple met when they were first starting their careers. Both of them were working in Seattle. “We had a relationship for three years, then we parted ways,” Uberuaga explains. “But Jeff was someone I always thought of. Always.” Summer had moved East; Uberuaga stayed on the West Coast, where he owned a series of restaurants. After 22 years, he found a letter in his mailbox. The return address was New York. It was from Summer. They decided to start a new life together in Summer’s Catskills home. Summer had nearly abandoned his dream of opening a high-end bed-and breakfast, putting Nehapwa on the market after working on it for seven years.

It had gone way beyond a reasonable investment. “Then everything just came together,” Summer says. The bed-and-breakfast is open from April through November, but Nehapwa accepts reservations all year. Guests can rent one room or the whole house. The couple is finding that guests who come to Nehapwa can’t wait to come back. “It’s the Catskills,” says Summer. “This area has so much, and yet somehow it’s still undiscovered.” Summer and Uberuaga are working on plans to open a new restaurant that will tie into the Nehapwa brand. And things that some residents find a nuisance are, in their opinion, advantages. “We’ve got no cell phone reception here. At first, people are frantic,” Uberuaga says. “But we do have wireless Internet and a landline. You can just see [guests] shift, they start to disconnect.”

“They sit on that back porch and all you can see are mountains,” Summer continues. “There’s nothing man-made at all. Just the notch between the mountains that the Native Americans called Manitou—‘the place where the Great Spirit resides.’ When people come here, it’s a rediscovery.”