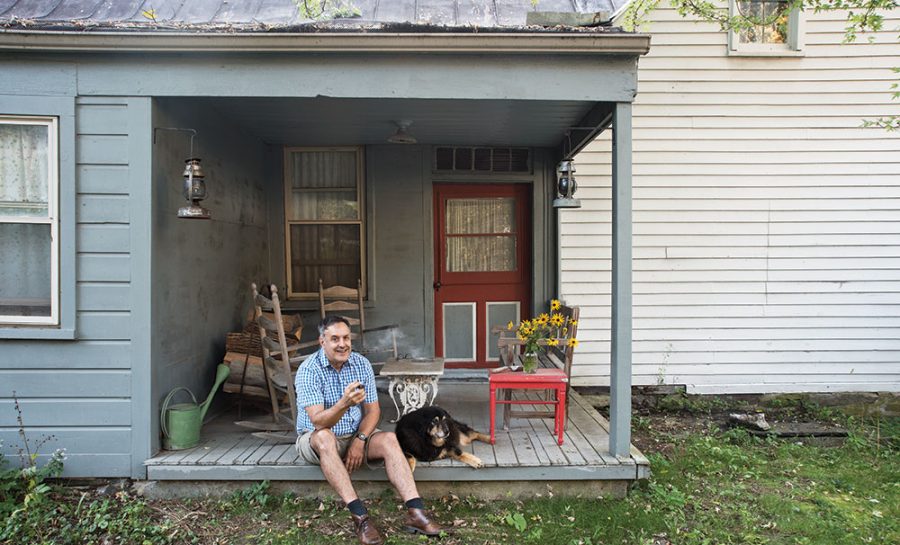 Most people searching for a historic home hunt for one with elegant charm, but Eric Kater sought out Oak Hill House precisely for its odd, patchwork layout. In 2003, Kater was working as an advertising writer at Time, Inc. and itching for an upstate refuge. One day, while prowling the internet, he found a house sitting directly on the main drag in Oak Hill, a once-prosperous tanning village in Greene County. “I basically just threw a dart at a map,” Kater says. “Then I saw the house and it seemed so long and so interesting looking that I had to come see it.” 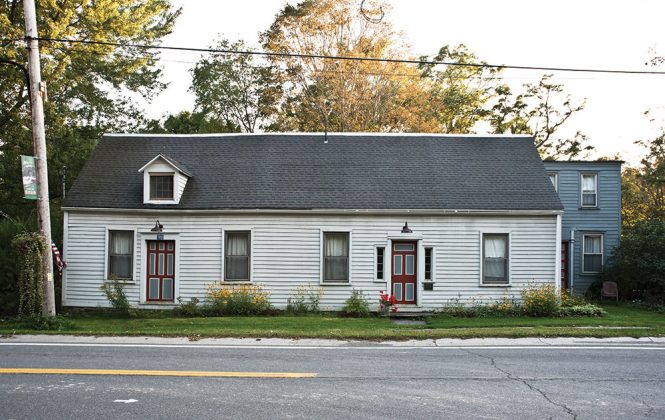 The Oak Hill House’s long profile blocks the road, creating a secluded oasis in the back.

The house’s rambling, quirky layout intrigued Kater. As soon as he saw it, he was smitten by the very aspects that would put other homebuyers off, like its lack of a front lawn. “To me, front yards are useless,” he says. “I love that because the house is so long, it just blocks the road, making it very secluded in the back.” To that end, the front door is almost never used. Pulling off Main Street, guests park in a short driveway alongside the house and enter the property through a gate set among hedges at the back. 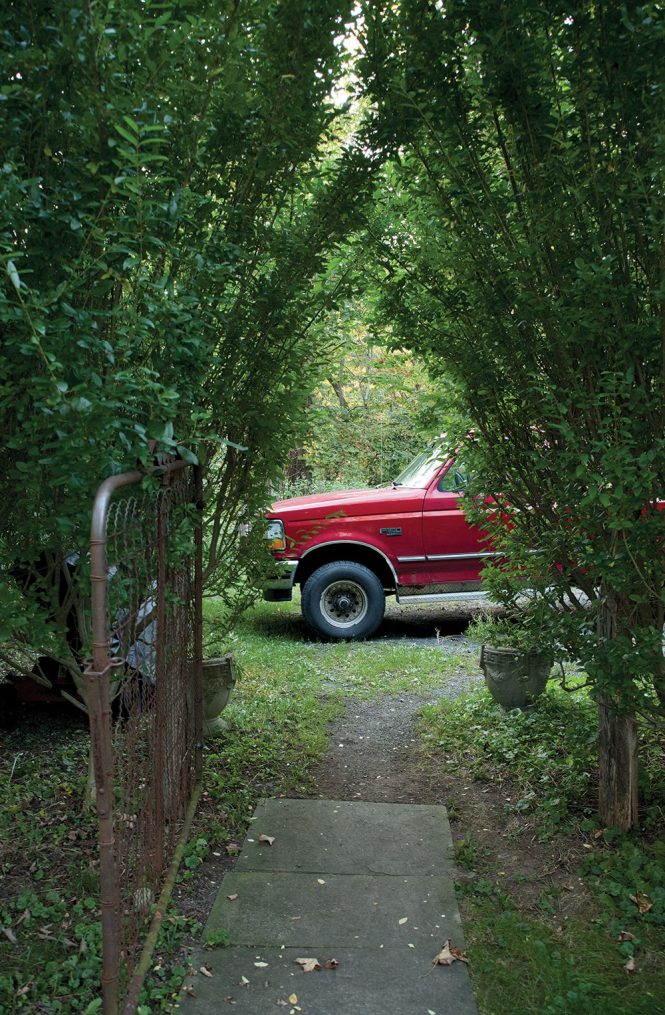 The side gate leads from the driveway to the backyard.

The gate gives way to a serene garden that looks fit for a lawn party of the landed gentry: There are towering maples, a bluestone patio, manicured flowerbeds, and antique cast-iron furniture. The landscaping was done by Kater’s wife, Susan Welber, a lawyer and avid gardener,  who considers the Oak Hill House is her favorite place in on Earth. The half-acre property is shaped like a pie slice, with Main Street as the crust. The level garden area behind the house gives way to a hill that slopes down to a narrow creek, where Kater has set up a fire pit with benches and a hammock for “camping experience without the hassle.” In the 19th century, a narrow-gauge railway ran across the creek and through the backyard, transporting goods like bluestone, hay, tanned hides, and fruit from the Erie Canal to downstate markets. Adventurous guests can wade into the water and find pieces of the stone foundation. 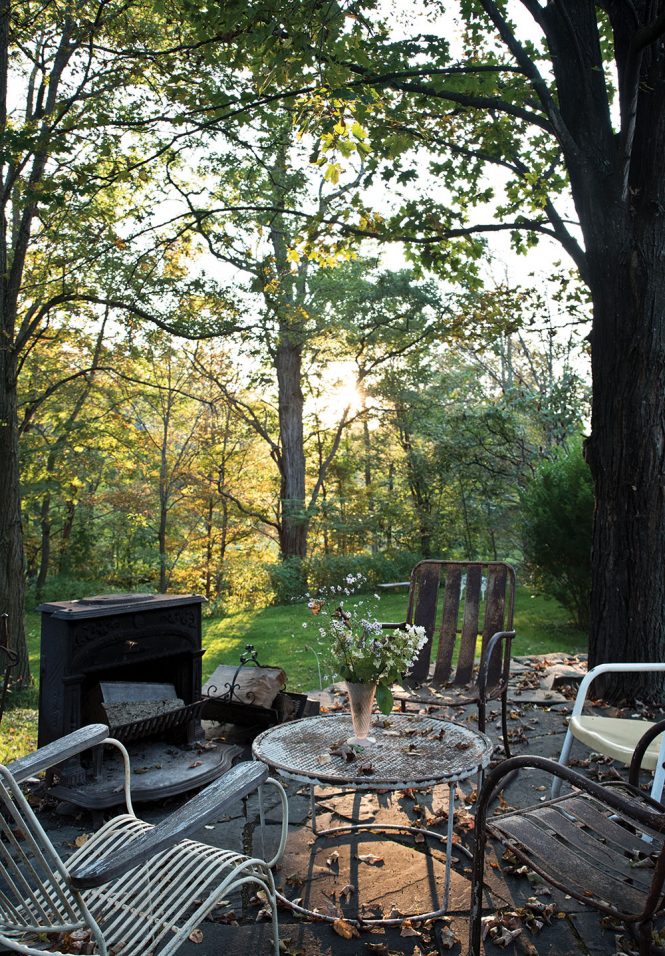 The bluestone patio is furnished with mix-and-match vintage lawn chairs.

The original Dutch-style, H-bent-framed house, a small, post-and-beam box, was built in the 1780s. Throughout the 1800s, one- and two-story additions were added to three sides, resulting in the rambling 11-room, 3,700-square-foot house Kater fell in love with. Since buying the house in 2003, Kater has fixed it up in stages, starting with addressing its structural issues like rebuilding the stone wall in the basement and replacing rotted floor joists, then progressing to aesthetic improvements like painting and refinishing both bathrooms.

Like many second-homeowners, when Kater isn’t upstate with friends and family, he rents the house on Airbnb. “This place is great for parties—there are lot of places to gather, and all the rooms have their own vibe,” he says. With five bedrooms and six beds, the house sleeps up to 10 people. And Kater doesn’t shy away from hosting big groups, claiming that the old house is happier when it’s thrumming with life.

Mixing the Past and the Present

The red Colonial back door opens to the kitchen, with its deep periwinkle walls and original, wideboard hemlock flooring. Modern stainless-steel appliances pair with antique oak cabinets and a butcher block island. Kater says the decor was something he “discovered by feel, after getting to know the house.” The hallmark feature is wood of all textures, types, and grains, which is mostly accented by a soft but saturated earth-tone palette: sage green, burnt orange, ochre. 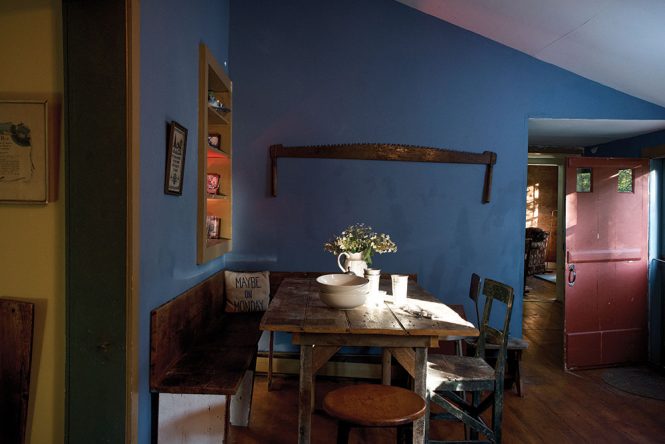 The back door opens to the kitchen.

“Part of the fun of the house is mixing the past with the present,” Kater says. “I don’t like hanging out in a museum or antique shop.” (That said, the house is stocked with antiques from all eras, many of which Kater bought for a song at Mooney’s, an auction house in nearby East Durham.)

The focus of the dining room is a long, antique harvest table. “The table came out of a barn in Catskill, covered in paint. I bought it for $100 and stripped it,” Kater says. He says his thriftiness makes him relaxed about wear and tear; he insists the house is “not precious,” which is in keeping with its original intent. At one time the house was occupied by Thomas Adams, a nail-maker and relative of President John Adams. “It was always more of a pioneering homestead house than a fine home of the time,” Kater explains. As such, he has preserved as many of the house’s original details as possible to create a rustic but comfortable space. “This not a showplace. It’s meant to be used,” he says. “The tables are all old—if you spill something, no problem.” 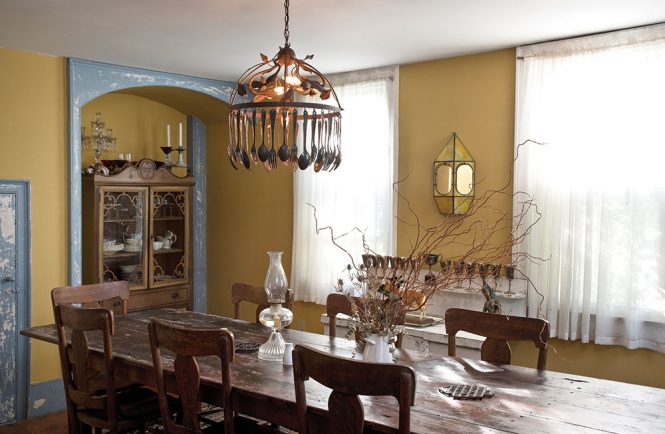 The dining room is located in an addition that once served as the local telephone operator’s office. 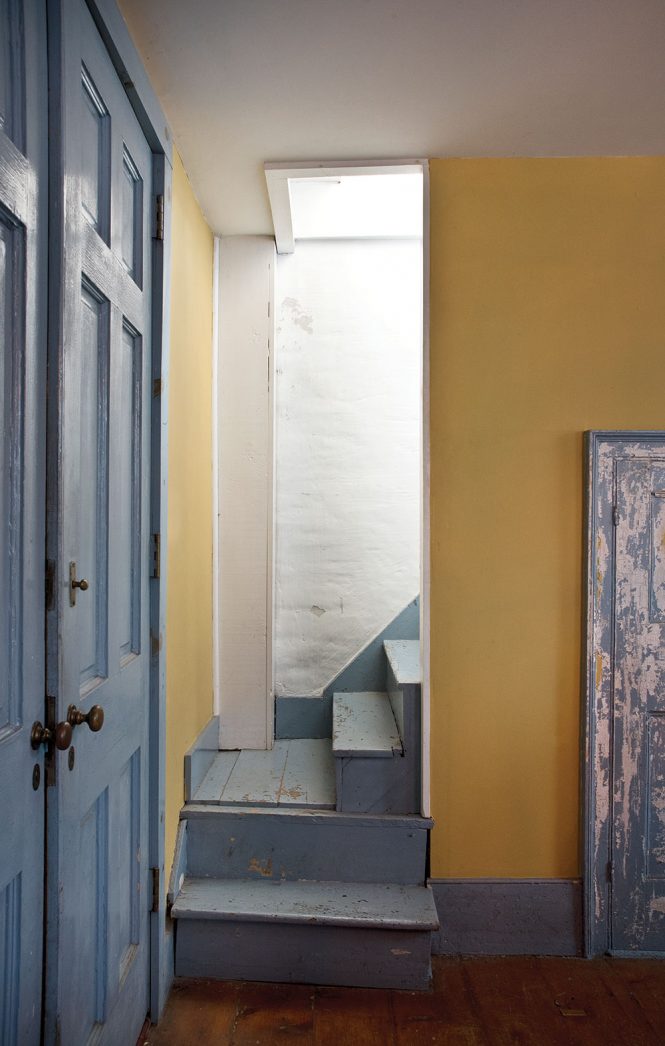 The staircase in the dining room is one of three in the house.

In a small room in the oldest section of the house, Kater has staked out a gentlemen’s bar. The room’s shiplap wooden siding and low ceilings remind Kater of a ship bar or captain’s quarters, so he has furnished it clubhouse style, with red vinyl barbershop chairs and midcentury woven brown leather chairs gathered around an Adirondack-style coffee table. A curated liquor selection and floor-to-ceiling bookshelves round out the clubhouse experience. The decidedly manly space is softened by a plush wool rug Kater bought in Morocco. He says this room is his own take on the Catskills country style, “a world-traveler’s hodgepodge.” 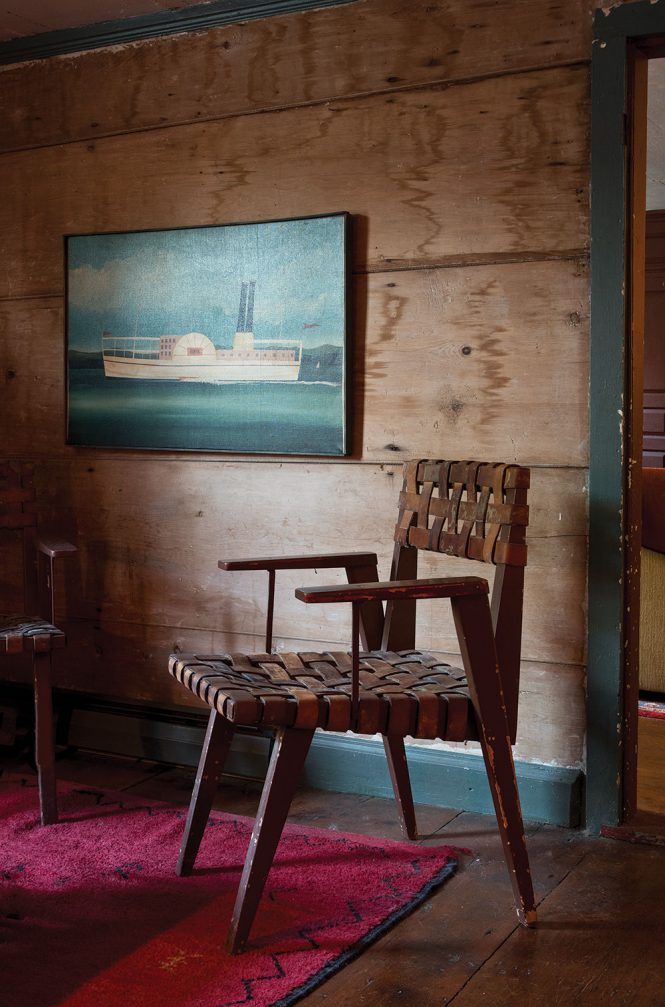 A Midcentury woven leather chair in the gentlemen’s study.

The first floor also houses a full bathroom, bedroom, and TV room with 1800s Georgian paneling, but the highlight is the great room. Kater removed the second story over this room to create a vaulted ceiling, leaving a small sleeping loft at the back. “I don’t have children, but my friends do,” he says. “Kids love the loft. It’s the perfect house when you’re little—all these staircases, places to hide. It has a magical quality to it.” A cast-iron Jotul wood stove serves as the room’s focal point, situated before a wall of windows that let in the southern light; along the walls are shelves of books from Kater’s former career as a New York Post book reviewer. The room feels at once expansive yet cozy, worldly yet familiar. 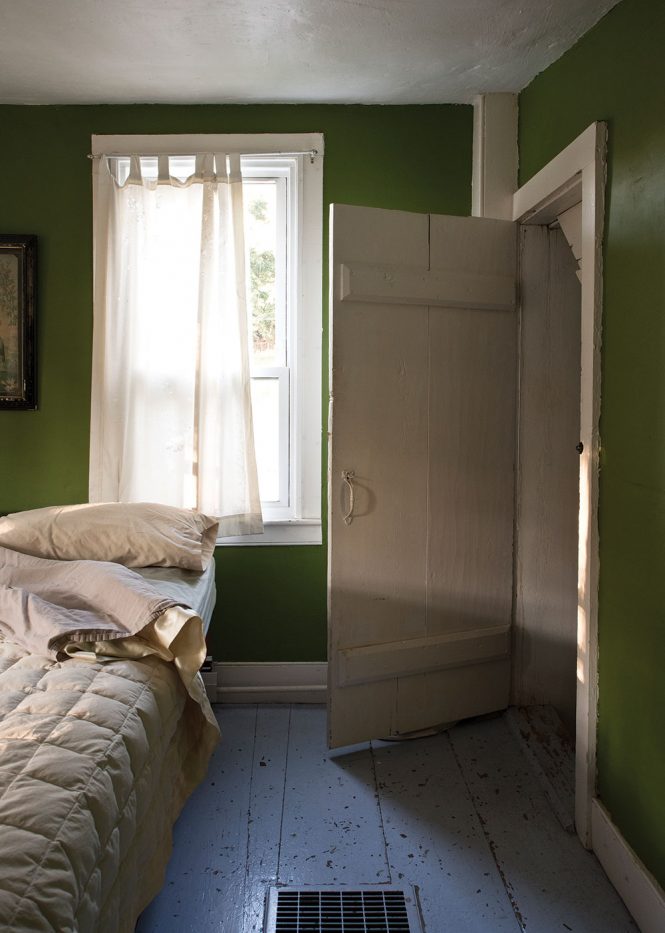 One of the house’s five bedrooms.

Kater also renovated both bathrooms—upstairs and downstairs—using mix-and-match reclaimed wood. “The good thing about a really old house is you can just throw wood at it, you don’t have to match,” he says. He used barn wood, hemlock, and pine, as well as wood salvaged from the great room. The downstairs bathroom features an antique soapstone sink, which Kater believes came from a high school science lab, and a shower made of Brazilian slate, echoing the prevalence of stone in the region. Upstairs, Kater moved the sink outside into the hallway, creating a spacious ladies’ bathroom with vintage wallpaper and a salvaged clawfoot tub from Brooklyn.

“If someone had told me how much I’d have to deal with, I probably wouldn’t have signed on, but I’m very happy I did,” Kater says. “It’s like a relationship—it’s one of those things you take a chance on and just go for it. You don’t know where it’s going to lead, but you surrender to the forces operating beyond your control.” 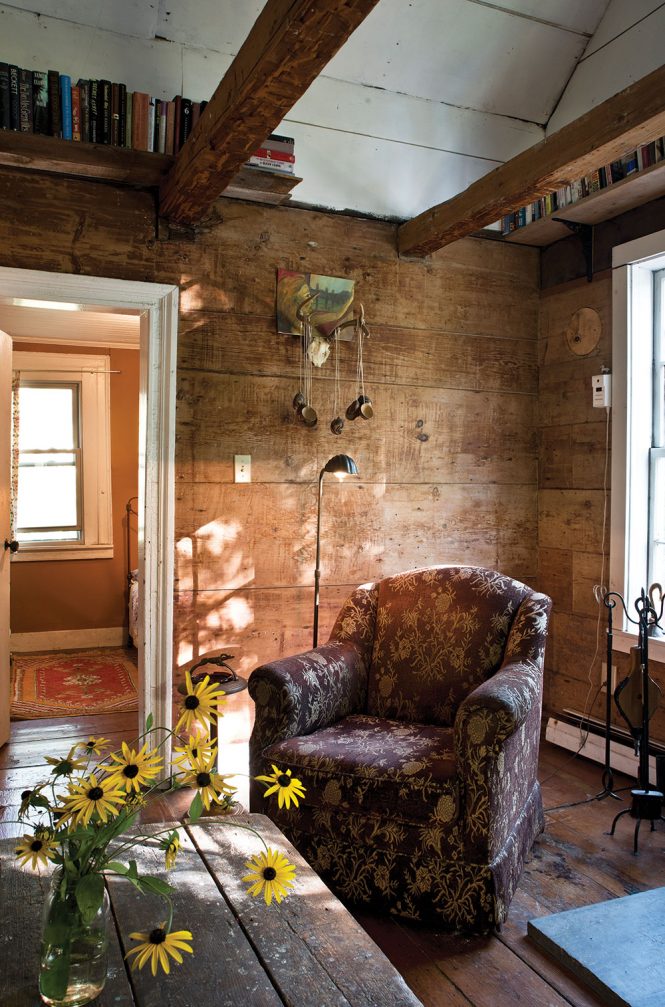 Kater removed the second floor above the great room to create vaulted ceilings.