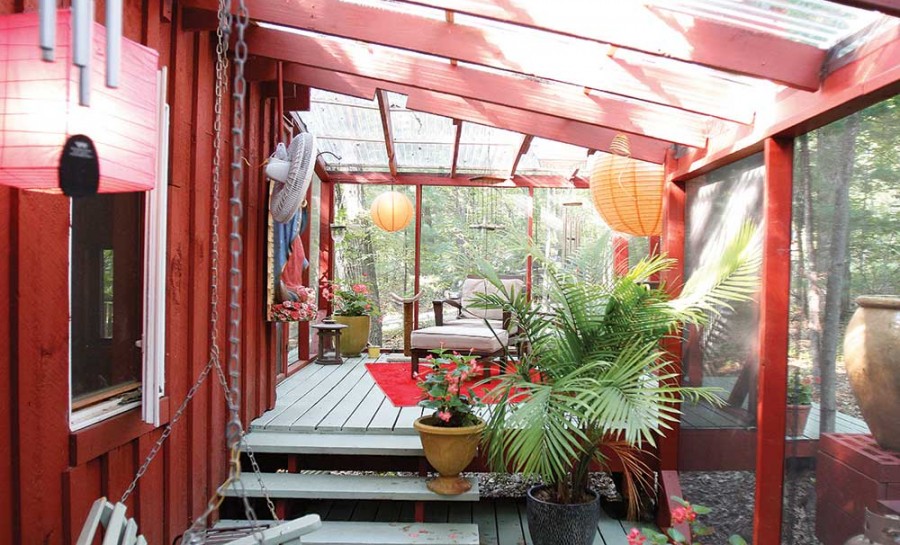 When it comes to transformations, Tom Judson is a master. The Mid-Hudson Valley native was once a skinny, jug-eared rural kid. He’s now a broad-shouldered actor-singer-composer with credits on Broadway and in cabaret and film. Little surprise that the multi-hyphenate performer is also a self-educated carpenter, electrician, and interior designer. Judson has applied his transformative powers to what he considers his greatest achievement: a home in the Village of Catskill.

The country retreat, tucked away on a dirt road, is an urban-style oasis in a rural setting. It is distinctively masculine yet stylish, reflecting both the man’s theatrical background and his house-building talent. Explaining his home, Judson offers an assessment worthy of an American Studies scholar: “I would describe it as the kind of house a TV writer from the ’50s would have had as his getaway where he would write the scripts to Playhouse 90 and drink.” 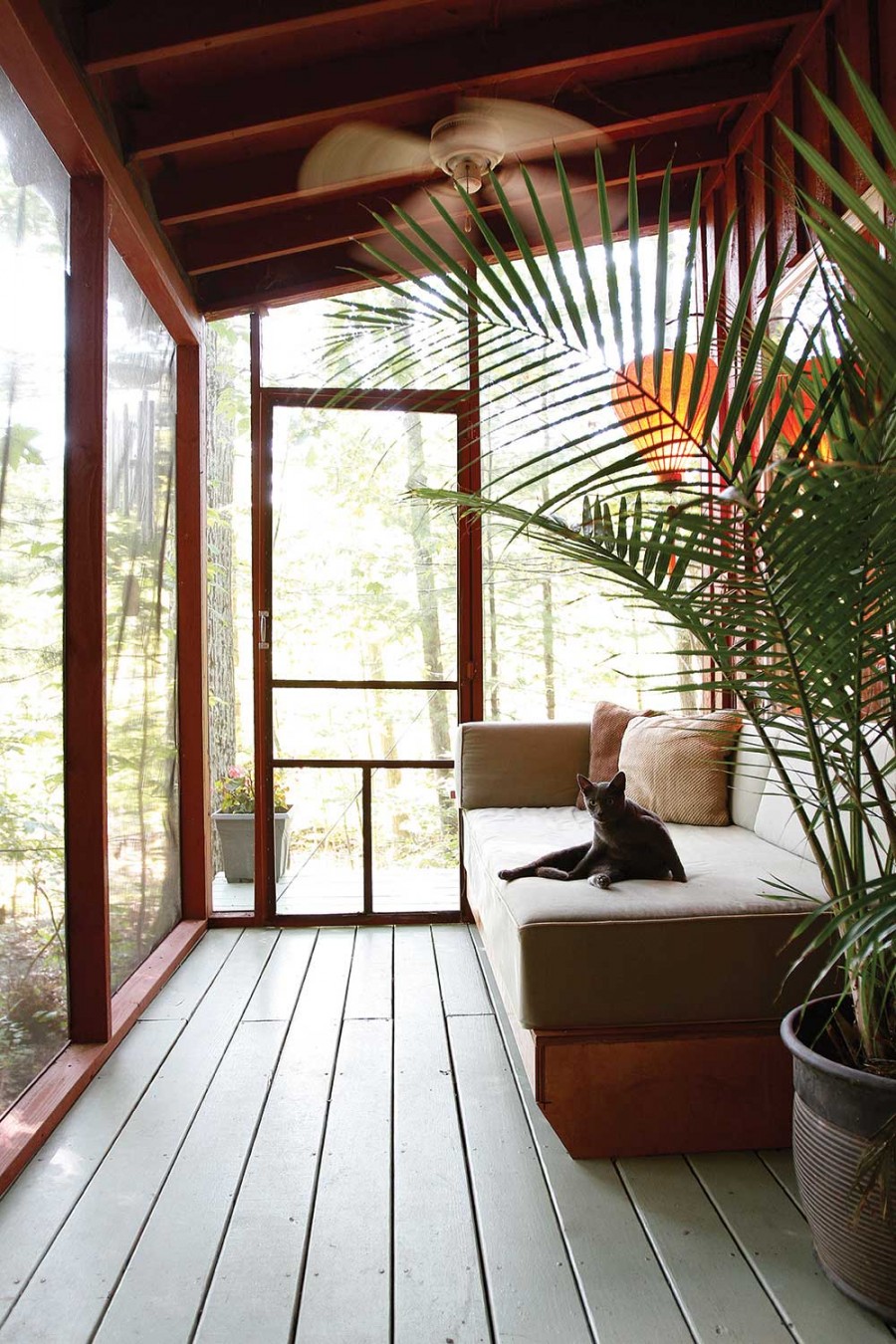 The reply is both snarky and spot-on. Judson’s home is dominated by a mid century-retro style replete with cultural subtext and witty details. Even more impressive is the fact that the sprawling residence—an 850-square-foot house encircled by 1,200 square feet of decks—was once a 12-by-20-foot hunting cabin.

Tom Judson’s journey from Manhattan actor to Catskill home builder began in 1990, when Deb Parker, a New York bar owner and friend, was exploring Upstate yard sales. When Parker learned of a rental house available in the Village of Catskill, she alerted friends. Judson and partner Bruce Birnbaum signed on. Despite being born in Orange County, Judson says, “I had never been this far north.”

The years spent in the weekender group home were halcyon but also bittersweet; AIDS was in full fury and several house members, including Birnbaum, would succumb. Judson left in 1999 to join the national tour of Cabaret. He was on the road for two years—but would return periodically to the Catskill house as a guest; his room had been rented. 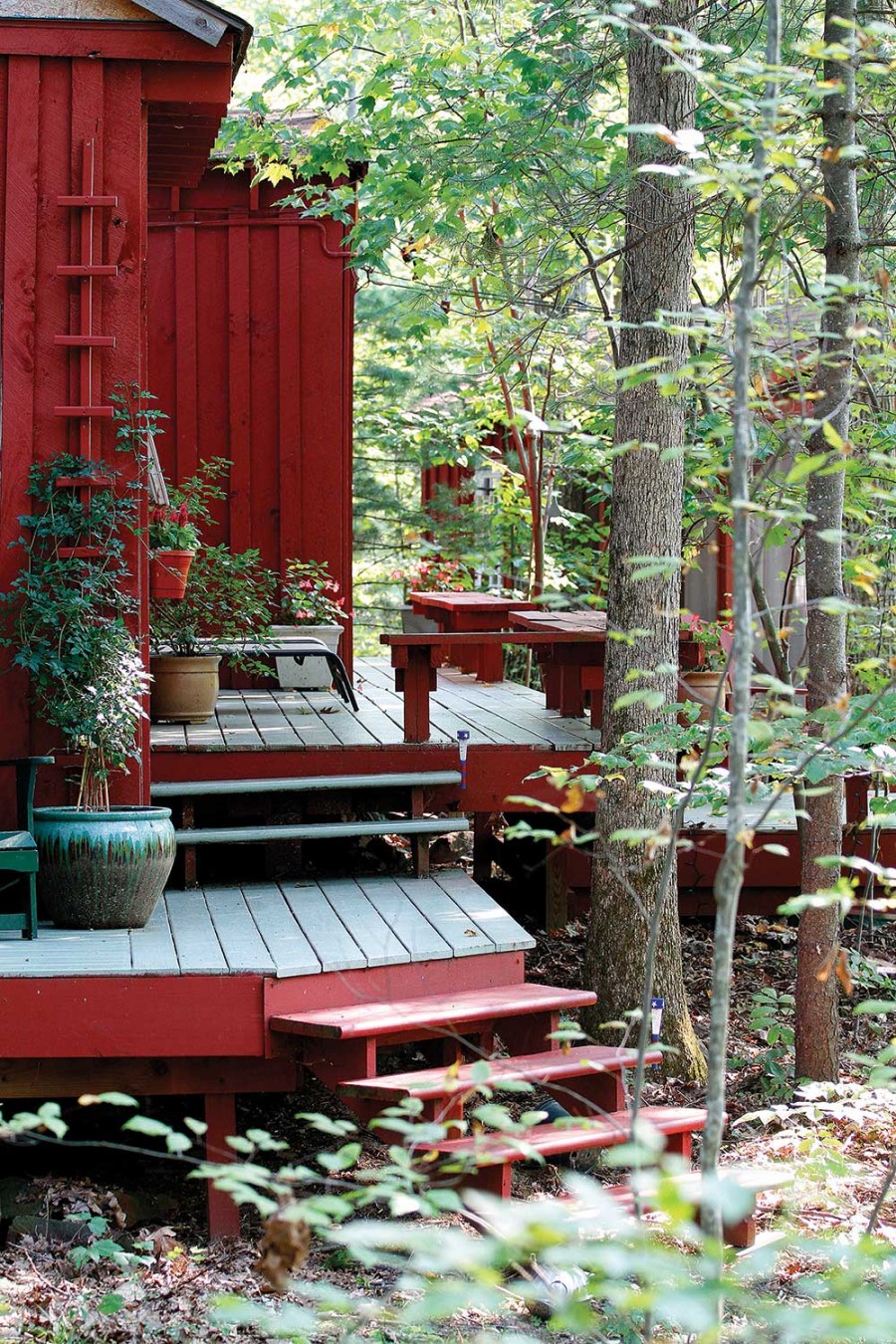 When Cabaret ended, Judson had a new show on his résumé. But, having given up his Manhattan apartment during the show, he was homeless. In September 2000, he returned to Catskill and told a realtor he had $50,000 and was looking for something “cute.” Rather than laugh Judson out of her office, she suggested a one-room hunting cabin built in the late 1970s on a single acre of woodland. They drove out to the place in the rain. The realtor had been unable to find the key, so Judson could only peer through a window. The walls were covered in burlap and the only heat source was a woodstove. The cabin had been neglected by an infrequent weekend resident and was “infested with mice, acorns all over the place,” Judson recalls. But it had plumbing, septic, and electric. Asking price: $28,000. Judson talked the owner down to $22,000.

For a year, Judson commuted between a Manhattan sublet and his humble country home, slowly transforming the wreck into a livable space with smallscale furniture that fit its snug interior. Electric heat was installed. “I have a knack for making anything really cozy,” Judson says. But there were limits to his magic: “I made this little, teeny-tiny house and I’m not a little, teeny-tiny person.” A year later, Judson moved upstate full time and launched a project to transform his shotgun shack into a country estate.

Not that refurbishing homes was in his repertoire; as a boy, Judson had constructed a bedroom desk of wood scraps and masking tape. “So it’s not like it’s in my blood,” he laughs ruefully. But a book from Barnes & Noble titled Carpentry—used by people applying for a master carpenter license—became his bible. The novice brought his plans for a new living room to the Catskill building inspector. “He’s gonna know that I don’t know what I’m doing,” Judson feared while he summoned his acting powers to convey casual self-confidence. To his shock and relief, a permit was granted. The then-unemployed actor had sufficient time to commence work in the fall of 2001, assisted by his father. They used rough-cut, untreated pine to match the original material. 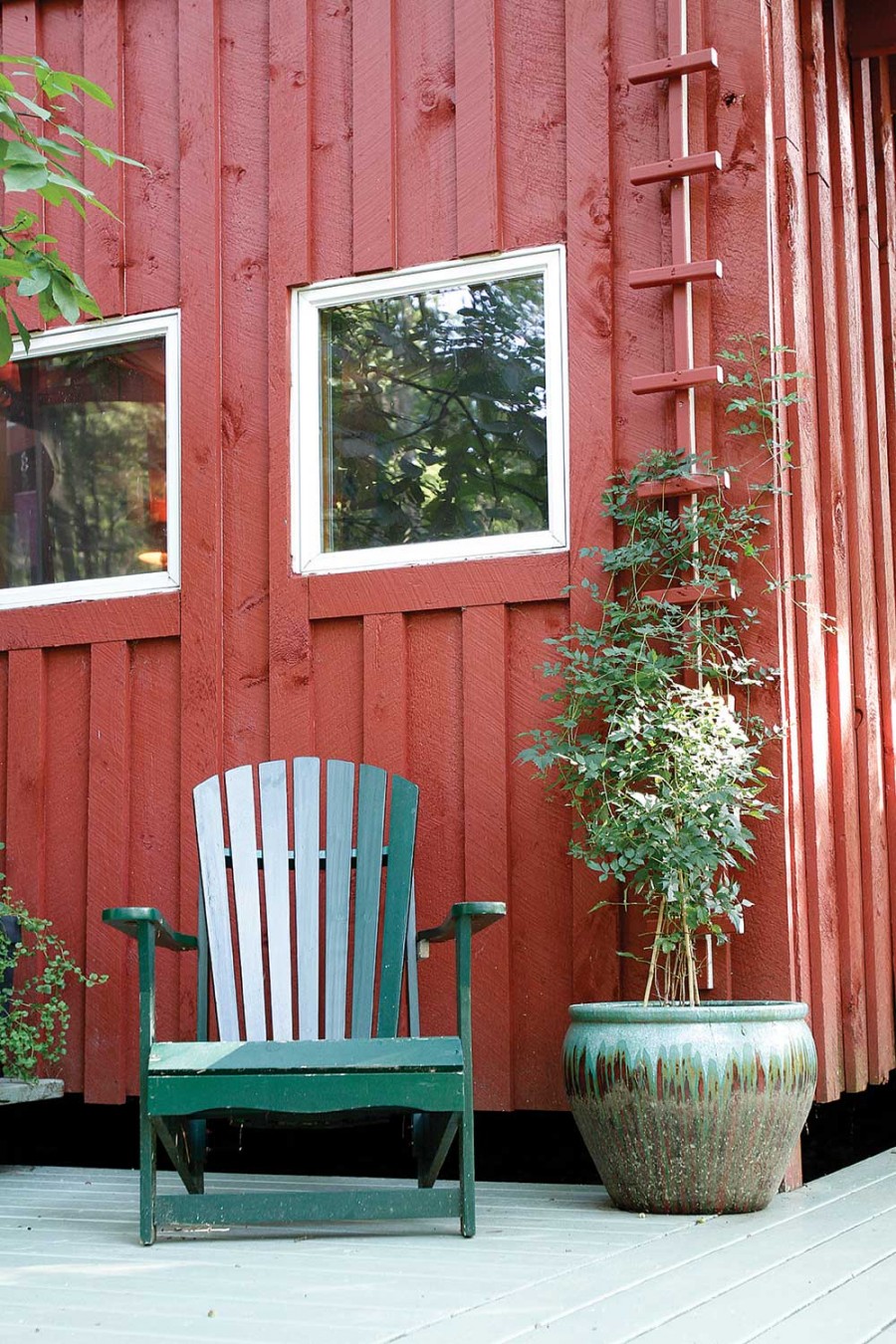 In 2005, Judson underwent another career transformation. In the road company of the musical 42nd Street, he was in a Midwest bar one evening. A director approached the ruggedly handsome man with a unique offer: a role in adult male films. When the tour ended, Judson accepted the new job, both tickled by the absurdity of the situation and grateful for the ego boost for a man in his mid 40s. (Adventurous readers can Google the nom de porn “Gus Mattox.”) Between film shoots in California, the novice film actor was back home, constructing a hallway leading to his bedroom and, later, a front porch and adjoining room. (He eventually left the business, after winning major adult film awards.)

Judson admittedly had no master plan for his Catskill home. He simply fit additions into the existing structure, “sometimes with serendipitous results,” he says. Because of an unruly roof line, he was unable to place the hallway flush against the living room, so it separates the bedroom from the rest of the house. Rocky terrain prevented him from digging deep for the foundation, so most of the house rests on platforms.

“And then, the decks—they just kept coming,” Judson laughs. He painted them sea green to make the barn-red house appear as an island in the sea. “Oh my God, I sound so pretentious,” he says. “But it’s really what I did.” Initially open to the air, the decks were screened in the summer of 2011 to accommodate a boyfriend who was susceptible to mosquitoes—“and then we broke up.” Judson spends most of his time out on the decks from spring through fall. 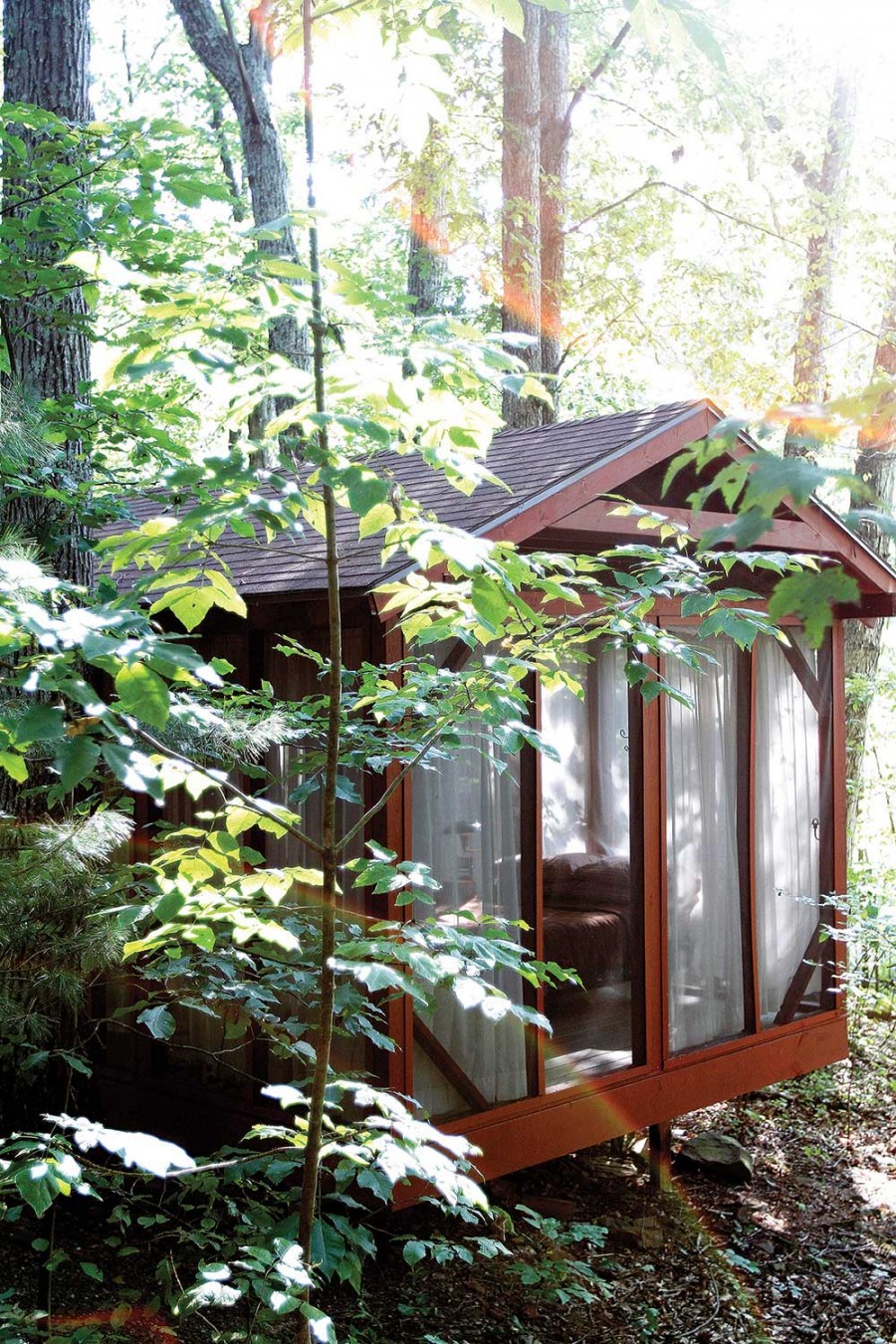 Judson confesses that much of his design inspiration is borrowed. “I am a huge, huge fan of Frank Lloyd Wright,” he admits. Details scattered about the house are lovingly appropriated. The living room’s plywood coffee table was copied from a Wright dining table. The corners of the house, surrounded by decks, echo the pole lamp in Wright’s landmark Taliesin house. Art deco touches, including symmetrical shelves, are a blatant homage. The Asian touches also are Wright-inspired: paper lanterns on the deck, fiberglass urns with water that trickles perpetually. “There is a certain sense of Japanese serenity around here,” says the homeowner. But Judson is no slave to consistency; an Our Lady of Guadeloupe shrine on the deck was a Wal-Mart purchase.

Most furniture, photographs, paintings, and decorative touches are thrift store finds. Light fixtures, wood siding, sconces, and rugs—even the kitchen linoleum—are vintage reproductions from Home Depot, Lowe’s, and Armstrong. The overhead Western-motif lamp in the kitchen, made of wrought iron and rawhide, is Judson’s sole indulgence, purchased from a Greenwich Village store for $2,000.

Judson’s decorating skills were honed during a stint as a house flipper, starting in the early 2000s, when he reclaimed, fully redecorated, and sold several area homes before the market collapsed in 2008 and he was forced to declare bankruptcy. It was, he says, “the best thing that ever happened to me, because it started me performing again.” That same year, the piano room was completed, as well as a 12-by-12-foot, gauze-curtained guest cottage. It offers bed-and-breakfast amenities: a mini refrigerator, CD player, and coffee maker. Birdfeeders strategically situated outside allow guests to awake to hovering hummingbirds. 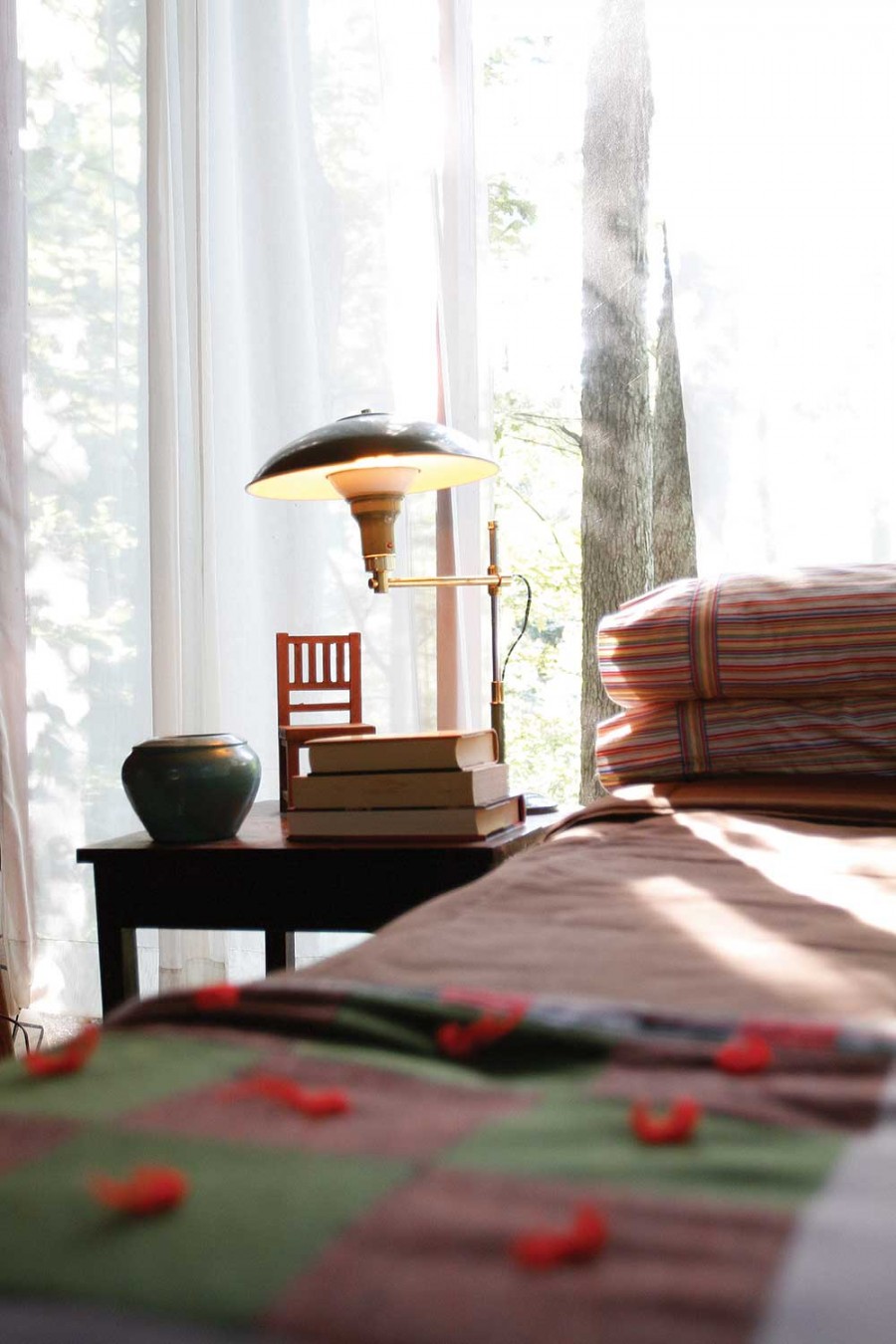 The homestead has survived snowstorms and 2011’s Tropical Storm Irene. Deer, possums, raccoons, a fox, and a coyote are neighbors, as well as an unseen bear that periodically topples garbage cans. Judson’s greatest foes, however, are “some really vicious squirrels” whose dropped acorns have cracked the corrugated plastic roof. “At times,” he says, “it sounds like a hailstorm.” But Judson views nature as a companion, not an adversary. Rather than a wholesale axing of trees to expand his home, he built around the oaks, pines, and hickory trees on his property. A huge oak bursts from a corner of the deck.

“As far as I’m concerned,” he says, “he who cuts down the fewest trees wins.”

In the past two years, Judson has toured with a one-man biographical show, written a memoir titled Laid Bare, and performed a cabaret act of musical standards. He is currently rehearsing a new show. Money is not plentiful — he calls himself “a pauper” only half in jest — but Judson is grateful for the self-taught skills that have transformed his shack into a backwoods palace. “I have a very good talent for living like a king.”