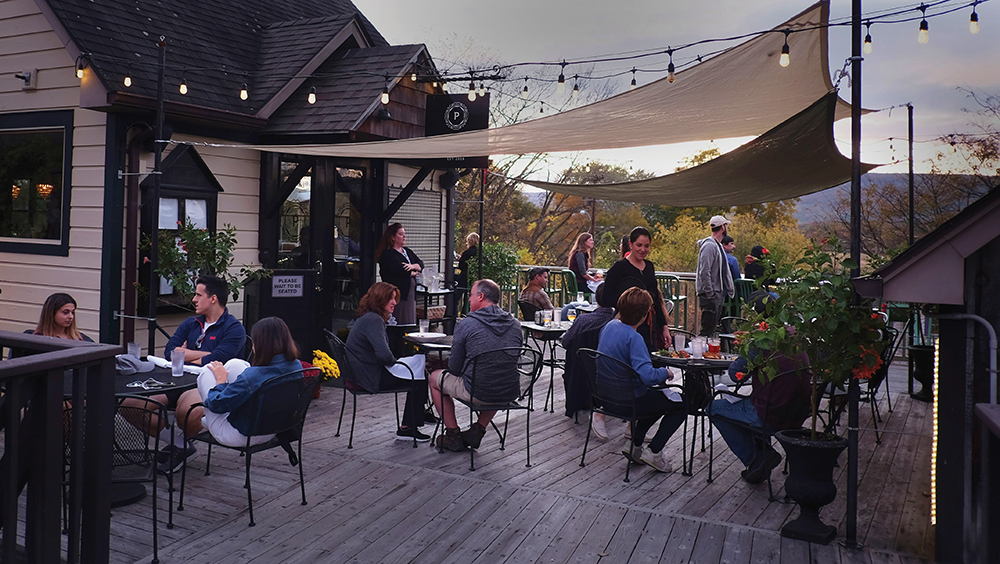 Proximity to Major City: New Paltz is 83.5 miles from Manhattan and 70.9 miles from Albany.

Nearest Hospital: Vassar Brothers Medical Center is 12 miles away in Poughkeepsie; HealthAlliance Hospital is 14 miles away in Kingston.

Set on a rolling hill with the Wallkill River running alongside it and the Shawangunk Ridge as its backdrop, the village of New Paltz is one of those places where people claim that breathing the air means one is fated to return. But besides its splendid scenery, this village has everything a resident could want, from entertainment and arts to good governance.

First and foremost, New Paltz is a college town. The student population of the State University of New York more than doubles the two-square-mile village’s population and shapes the larger surrounding town’s dynamics.

Noted in the 1970s for its art department, experimental environmental education, and free name-band concerts held on land then known as the “Tripping Fields,” the college is renowned today for its academic rigor and high rankings on national best-college lists. Plus, there’s the 9,000-square-foot Samuel Dorsky Museum of Art, opened in 2001, and the civic scholarship of the Benjamin Center for Public Policy, founded in 2008. From public performances at the School of Fine and Performing Arts (recently including Grammy-winning cellist Mike Block and percussionist Kyaw Kyaw Naing) to the Hudson Valley Advanced Manufacturing Center’s 3D printing services, the college provides a wellspring of cultural assets.

New Paltz was founded in 1678 by 12 French Huguenot families fleeing anti-Protestant persecution. In the early 18th century, they replaced their wooden houses with stone ones; their legacy is Historic Huguenot Street, a 10-acre National Historic Landmark District, America’s oldest street with original homes intact. The Huguenot Patriotic, Historical, and Monumental Society, founded in 1894, is a nonprofit hosting school programs, archaeological digs, community events, and guided tours, with a focus on rediscovering the lives of women, African Americans, and Native Americans.

Casually elegant Mohonk Mountain House has welcomed five presidents since 1869. Founder Albert Smiley began by offering people a place to rejuvenate beside a crystalline mountain lake. Succeeding generations have built on his ideals and birthed two nonprofits: Mohonk Preserve, which stewards thousands of acres and conducts environmental education and conservation science programs, and Mohonk Consultations, whose mission is “to foster a greater awareness of the interrelationship of all life on Earth,” and has built an award-winning geothermal day spa at the Mountain House.

Maryann Fallek, a retired history teacher and SUNY instructor who’s lived in New Paltz since 1969, loves the village’s backdrop and the populace’s warmhearted intellectuality. “People fall in love with the Ridge and the trails, having access to all that and culture too, and that’s become more and more unifying over time,” she says. “It draws people who lean toward inclusive and accepting, and they build organizations that express that.”

In 2019, after 19 months of debate, the college changed six buildings’ names from those of slaveholding Huguenots to local places like Shawangunk and Mohonk—a process that was typical New Paltz. “There was an appreciation for complexity, and the overriding context was ‘bring your understanding and respect to the table because smart, caring people can think differently and have solid reasons for doing so,’” Fallek says. “We’ve got a rare sense of community here. It’s delicate, it doesn’t always happen, but more than once I’ve seen challenges lead to understanding.”

Main Street can get backed up with visitors heading from Thruway Exit 18 to the mountains, especially on Memorial Day and Labor Day, when the Woodstock-New Paltz Arts & Crafts Fair packs the fairgrounds on Libertyville Road. But locals work around the traffic, taking Henry W. Dubois Drive or Shivertown Road to visit mainstays like the iconic 24/7 Plaza Diner; family-run True Value Hardware; and Mark Gruber Gallery, offering modern iterations of the Hudson River School.

The village hosts two indie bookstores, Barner Books and Inquiring Minds, Inc.; quirky shops like Kon Tiki and Groovy Blueberry; headshop Likwid; and longtime fashion, jewelry, and home goods store Handmade & More. There are a multitude of bars, including Clemson Bros. Brewery and the Gilded Otter, which offer live music, along with Main Street Bistro, Huckleberry, the Grille at Novella’s, and Murphy’s Restaurant & Pub. Near the Wallkill River is Water Street Market, a rustic shopping complex offering eateries, original creations, antiques, and the black-box Denizen Theatre. Sip wine at Jar’d or a coffee at Mudd Puddle Coffee Roasters, or savor the view of farmland flats washed in a ridge-framed sunset from the Creole-style Parish Restaurant on the roof.

Spending time in nature is easy. The Wallkill Valley Rail is part of the developing Empire State Trail system, and the River to Ridge Loop reaches Minnewaska State Park and Mohonk Preserve, which boast world-famous rock-climbing routes and carriage trails for hiking, running, and cross-country skiing. And there are yoga classes and wellness modalities galore.

At around $100,000, there’s land to build on or the odd fixer-upper on the outskirts of town. Ranch-style houses, village condos, and even occasional renovated farmhouses can be had for just under $300,000, while larger, fancier new places and historic gems start at under $400,000. Between $400,000 and $500,000 buys space, charm, and mountain views on the rural edges of town in four- and five-bedroom Colonials and Victorians. Above that price, there are larger lots, great rooms, granite countertops, and architect’s originals.

If you’re in the market for luxury, for sale in the village is a $1.25 million newly-built Victorian-style manse with a screened-in porch overlooking the Wallkill River, complete with a Jacuzzi, chef’s kitchen, and library. For $2.5 million, a working organic farm is listed with barns, pond, and a period farmhouse.

Seniors can purchase apartments at Woodland Pond, an individualized care facility that’s rich in creative, cultural, and wellness-oriented amenities and offers independent and assisted living and round-the-clock nursing when needed. And of course, there’s a view of that glorious ridge.