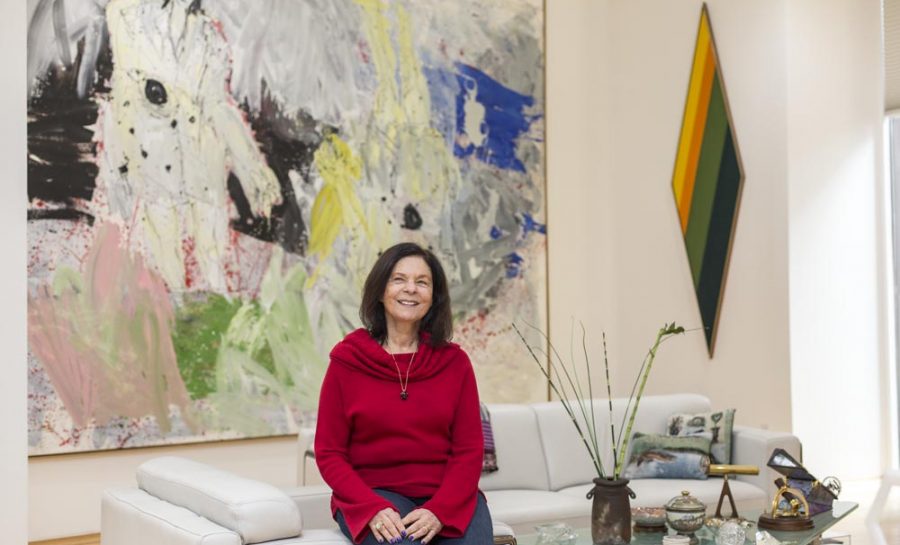 Livia Straus describes the house where she and her husband Marc live in Chappaqua as “traditional in tone from the outside.” Studying the house, which sits at the end of a leafy cul-de-sac, backing onto the shore of Whippoorwill Lake, it’s easy to agree with her. All of the neighboring houses exude the same quiet vibe of 1980s suburban modernism. 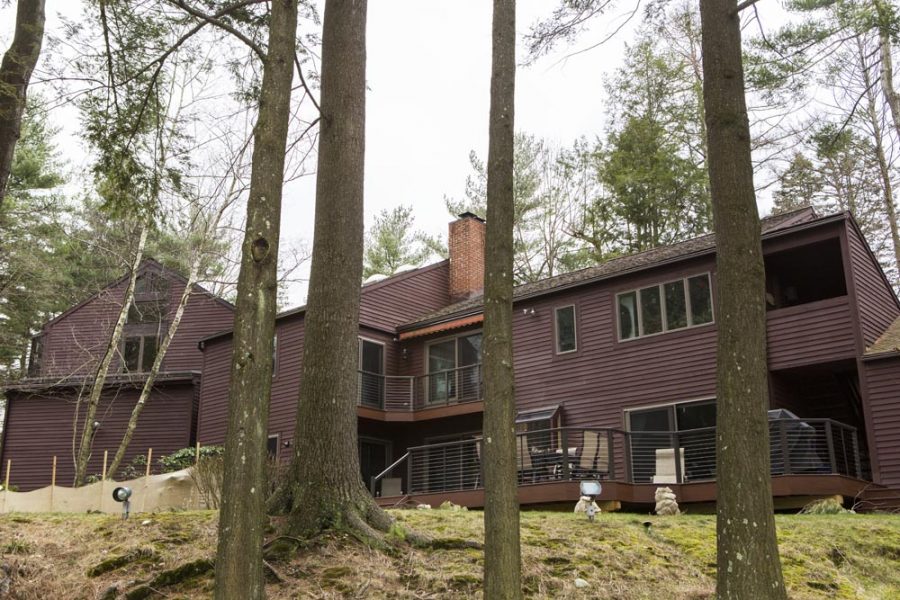 But the Strauses have always been a few steps ahead of everyone else. They built the house 30 years ago, in unspoiled woods that still rang out at night with the sounds of owls, to house their modern art collection. The Strauses, as founders of the Hudson Valley Center for Contemporary Art in Peekskill, collect and loan out very large artworks. They designed the house themselves because they couldn’t find an existing one that fit their very specific interior needs. “We weren’t planning on building our own house,” Livia explains. “But we were going around looking at houses with a tape measure and realizing with every single one that we’d have to put in higher ceilings. It wasn’t making any sense.”

For example, she gestures to the solemn, magisterial Anselm Keifer painting that dominates the living room. “It’s nine feet high, seven feet wide, and because it has things hanging from the canvas, it can only travel straight up,” she says. So the room’s enormous glass windows, which seem to dance around the space, letting natural light splay across the high cathedral ceilings, are removable.

Near the Kiefer are artifacts from Matthew Barney’s hallucinatory Cremaster Cycle and a sculpture by Richard Serra—who, incidentally, once offered to build a massive piece in the Strauses’ backyard that would block their view of the lake. (They politely declined.)

The episode with Serra illustrates the house’s major theme: There’s a constant interplay between works of art and people who spend the majority of their time in dialogue with it. One of the first pieces the Strauses ever bought, a two-tone Ellsworth Kelly painting, now hangs upstairs in Marc’s office. At the time, the couple was living in Boston, in a much smaller space. “It changed our whole environment, our whole language,” says Livia. “That’s the test of a work.” 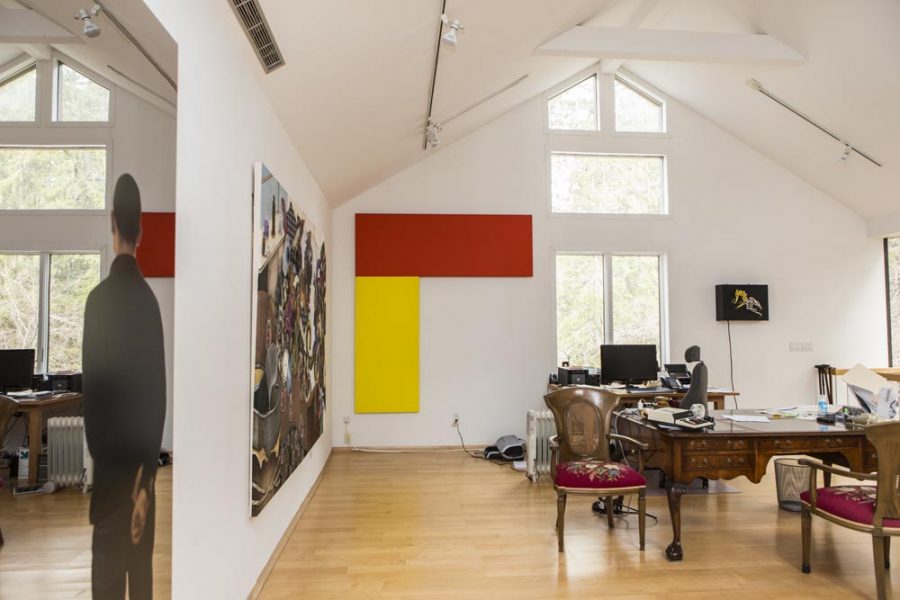 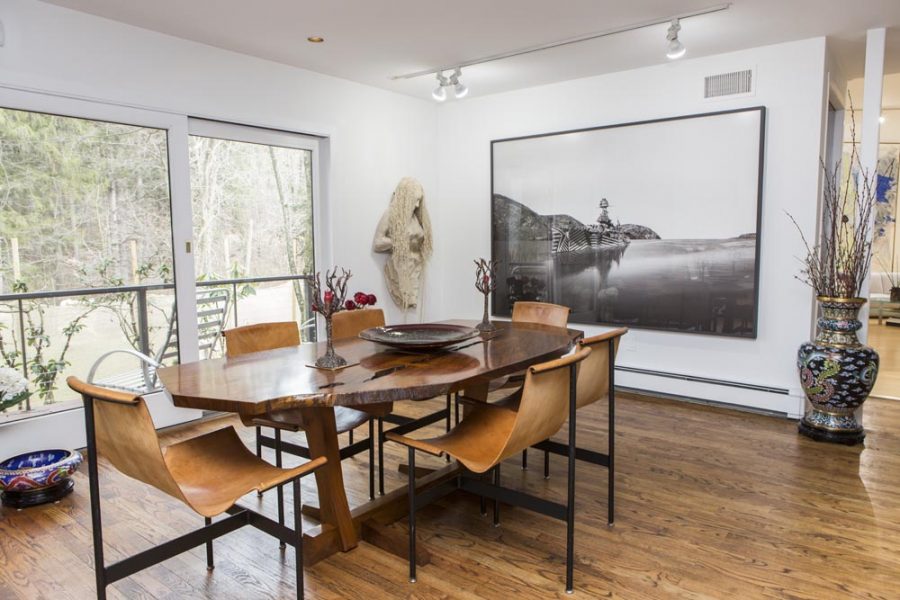 The Strauses’ impressive collection consists of dozens of such large-scale works, most of which are centered in the three-story wing of the house that holds the office where Marc, a retired oncologist, now works. Although it’s tempting to consider the house as having a “museum half” and a “living half,” the Strauses have no interest in such distinctions.

“This is our living room!” says Livia, pointing out a classic white leather couch sporting a cross-stitched pillow with a jumping trout inscribed with the words “Welcome to the Lake.” It’s a fairly ordinary living room, but instead of having a TV as its focal point, there are six TVs in it, all stacked on top of one another by famed architect Nam June Paik to form a giant robot. 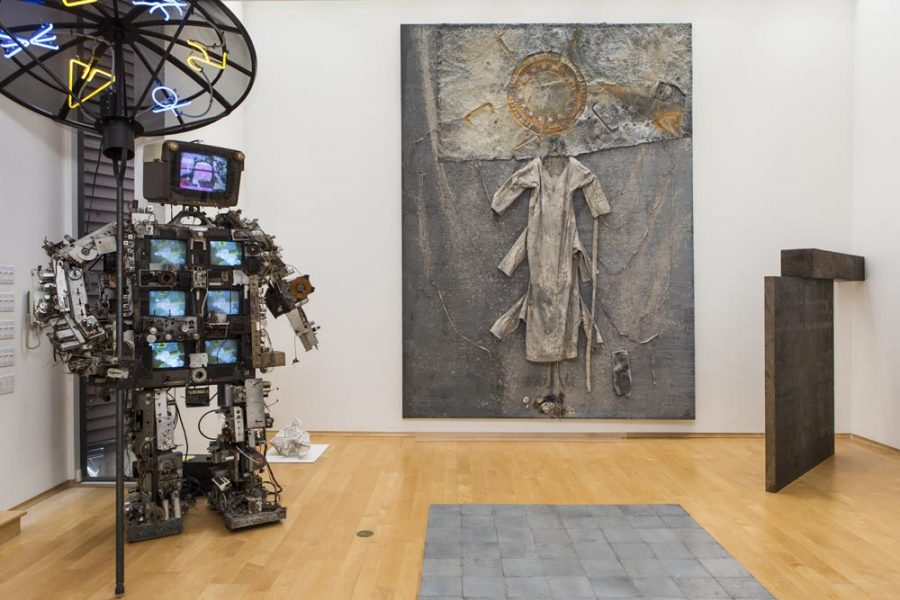 “Marc and I tend to love the same works,” she says. “And those works tend to be ones that other collectors wouldn’t necessarily purchase because they’re hard to live with, or the message they present is difficult. But that’s the kind of work that’s always attracted us.”

Which explains the Hermann Nitsch paintings made in blood, the cage built by Louise Bourgeois, and the haunting Entang Wiharso sculpture featuring a nightmarishly large koi fish and a severed head. A gruesome Ryan Mosley painting of a head with the skull missing and the brain exposed, hanging in an upstairs bedroom, is ringed by glow-in-the-dark stars that the couple’s children stuck there when they were small. Framed works by their grandchildren share space with works by famous artists. Livia points out a few by their grandson Asher, now 11 years old. “We started hanging these when he was six. I just thought he had a wonderful sense of color. Very free,” she says, with a mixture of grandmotherly pride and tongue-in-cheek wit. 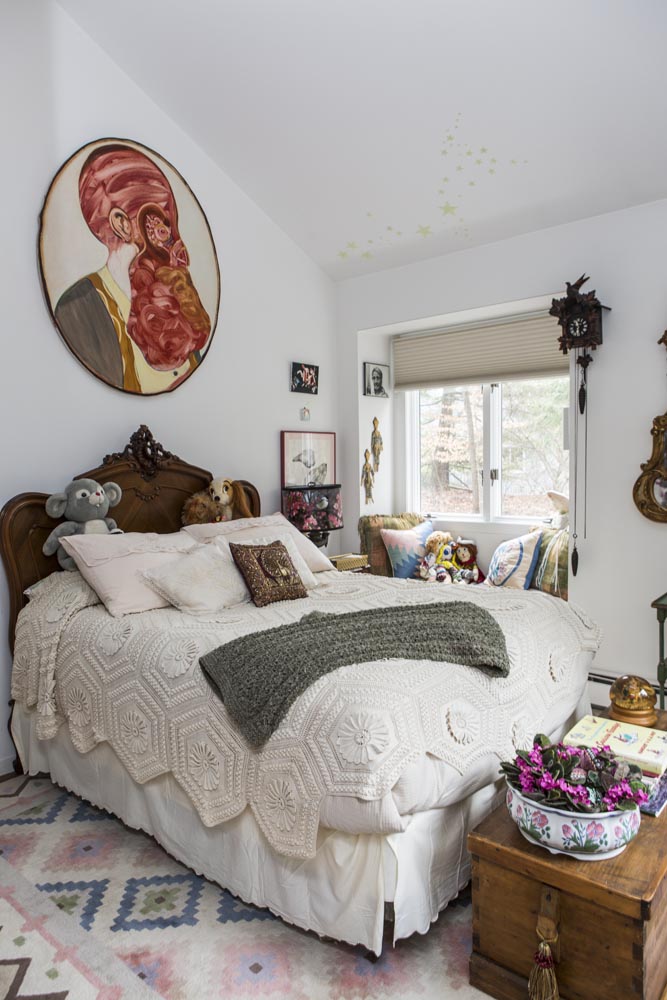 And what might children think of growing up around such intense artwork? Livia says she has found that kids are not as easily traumatized as some grownups expect. “You might think that’s a scary painting,” she says of the Mosley piece. “But the kids look at it and they understand that it’s art, so they have different interpretations. They see different things.”

In the house’s main wing, the ceilings are lower, the walls and floors transition to dark tiles and darker wood, and the mood shifts from communal to intimate, but art still abounds from all corners. Antique Toby jugs, which Marc collects, perch on a shelf above the kitchen hearth, and Fenton Depression-era cranberry glass pieces are placed throughout the couple’s bedroom. “When you’re a collector, you collect,” says Livia. “It almost doesn’t matter what.” 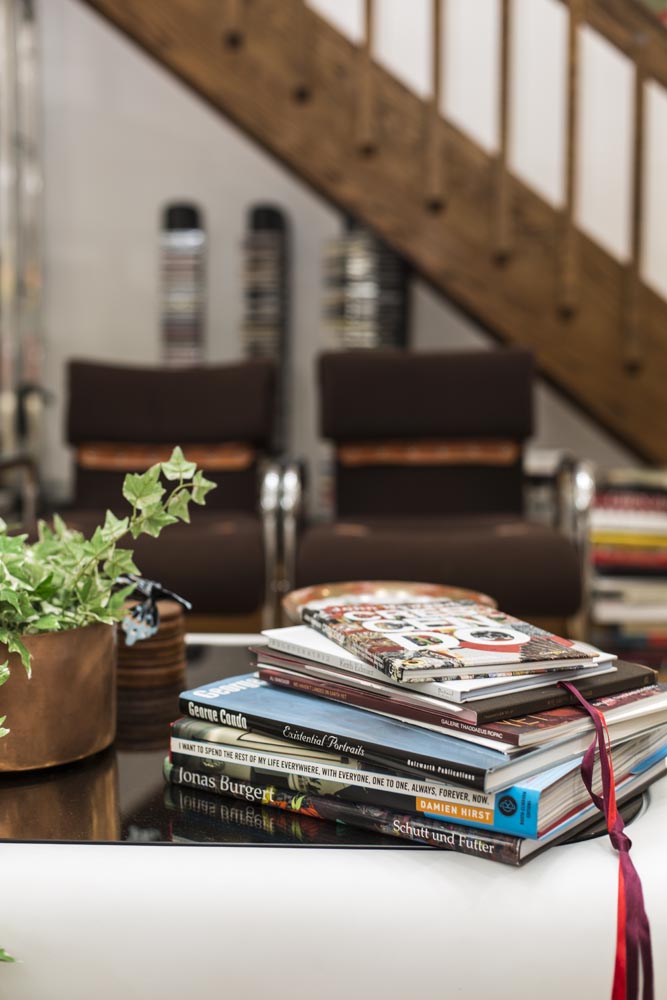 The fireplace in the kitchen extends upward to include an additional fireplace in the couple’s second-floor bedroom. The hearth creates coziness, but it is also a reminder of one of the hazards of living with irreplaceable works of artistic significance. Years ago, a candle and a closed flue teamed up to produce an explosion in the upstairs fireplace, Livia recalls. The flames licked upward toward what was hanging just above it. It was terrifying, but she still can’t help but laugh as she recounts what she told her husband in the moment when the vital connection between their family life and cultural life was threatened: “I yelled to my husband, ‘I’ll call the fire department, you grab the Mapplethorpe!’” 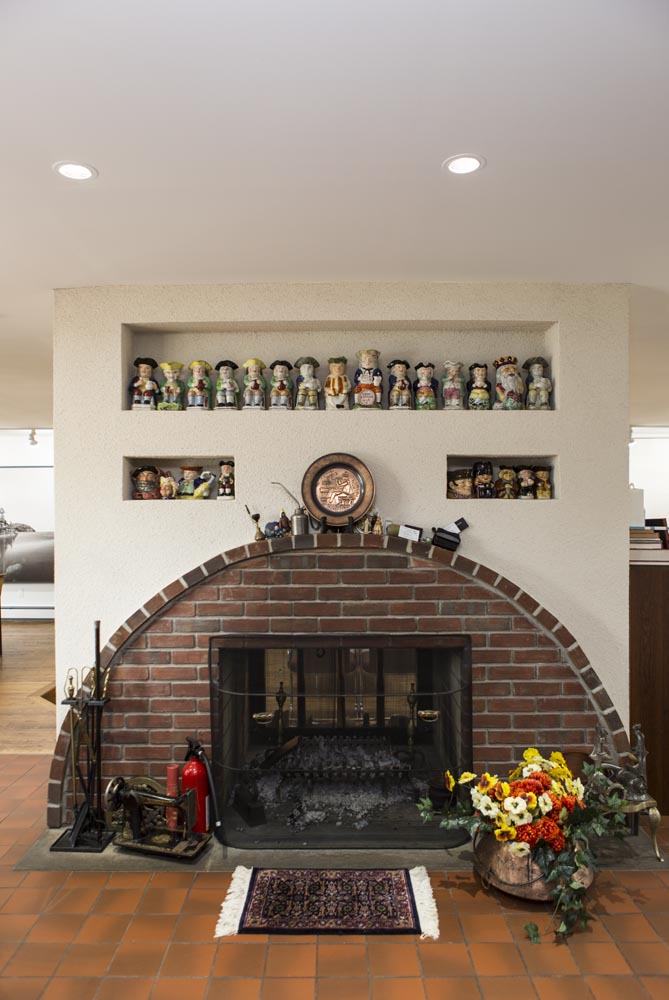