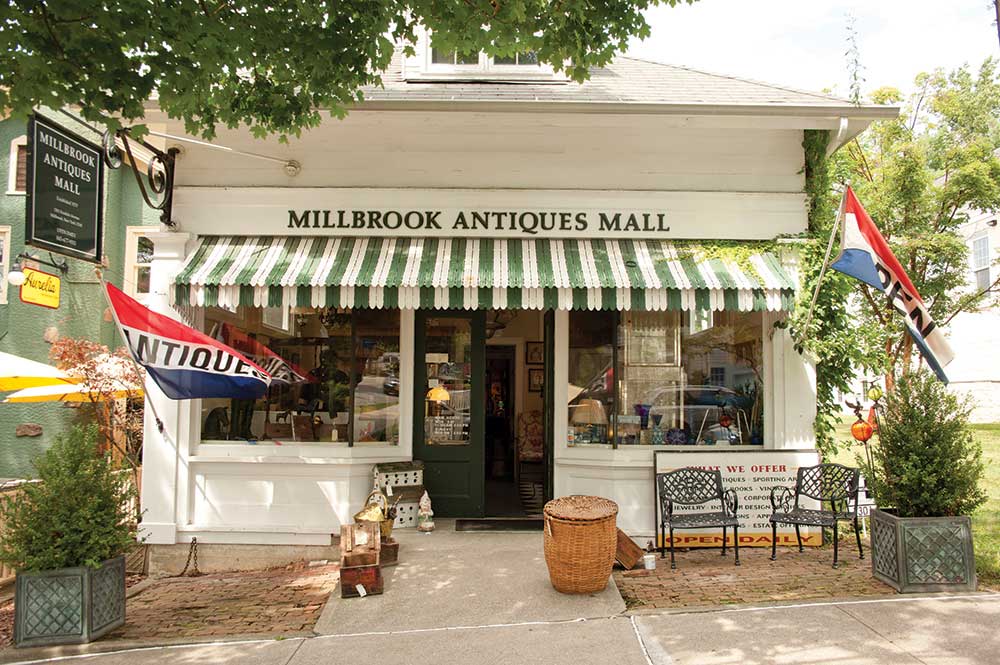 Millbrook, population 1,500, is truly a place apart. Its vibrant commercial district comprises tree-lined streets of handsome Victorian brick, clapboard, and shingled shops. Surrounding the village are rolling hills dotted with farms and estates, like a mirage from an era before sprawl degraded so much of the American countryside. You can glimpse fenced pastures from the end of the main street and you’ll pass signs for horse crossings, farm-fresh eggs, honey, and raw milk on the way into town. Located in the heart of Dutchess County, Millbrook is situated 90 miles north of Manhattan and 12 miles west of the Connecticut border, the village is home to a pleasant variety of shops and restaurants.

Millbrook draws a substantial weekend population from New York, and serves as permanent home to many affluent residents who enjoy its low-key lifestyle. A social symbiosis has developed over the last 150 years between wealthy estate owners and middle-class townspeople. Millbrook’s culture and surroundings still support an equestrian lifestyle, and boast such institutions as the Millbrook Hunt and the Millbrook Golf & Tennis Club. Pastimes include polo matches, or at Orvis Sandanona, clay-shooting.

Millbrook has many residents with ties to the area that go back several generations. H. George Whalen III, owner of a real estate firm and the third generation of Whalens to be president of the local bank, grew up in Millbrook when it was still surrounded by dairy farms, and he cares passionately that the village preserves its traditional ambience. For example, after an independently owned drug store closed last year, Whalen worked hard to recruit another independent pharmacist to Millbrook so residents wouldn’t have to drive to Pleasant Valley for the nearest chain pharmacy.

The village offers many independent businesses: there’s a 1950s-era diner where you can get a cheap cup of coffee and a plate of fries; there is also a Stewart’s Shop, camouflaged behind a green hedge. Even the gas station is charming, located in a gable-roofed building resembling a hobbit’s house. Millbrook has retained a decades-old hardware store, and Marona’s Market, the local family-owned grocery store, is supplemented in the warm-weather months by a farmer’s market every Saturday.

VARIETY IS THE SPICE

The beauty and slow pace of the village encourage strolling on foot. Franklin Avenue, the main drag, is anchored at one end by a hilly, pine-shaded park with a children’s playground, and a village green gives the town a New England feel. Millbrook’s streets, sidewalks, and back alleys were laid out in an apple orchard after the railroad arrived in 1870.

Tight zoning laws and the protection of thousands of acres of farmland by the Dutchess County Conservancy have preserved the countryside from strip development. “One of the beautiful qualities of the area is that the commercial aspect is confined to the village,” Whalen says.

Free concerts are held in the village’s band shell, and an assortment of restaurants also draw well. A few miles outside the village, the Millbrook Winery, a popular destination, offers tastings . The Millbrook School, one of the village’s largest private employers, is the only high school in the country to host an accredited zoo on its grounds. With 180 animals—including 11 endangered species—the zoo attracts over 30,000 visitors a year and is open every day from nine to five. The Cary Institute of Ecosystem Studies is one of the world’s leading environmental science research centers and hosts a program of lectures and interactive events. The Innisfree Garden  combines Modernist ideas with Chinese and Japanese garden design principles on its 185 acres.