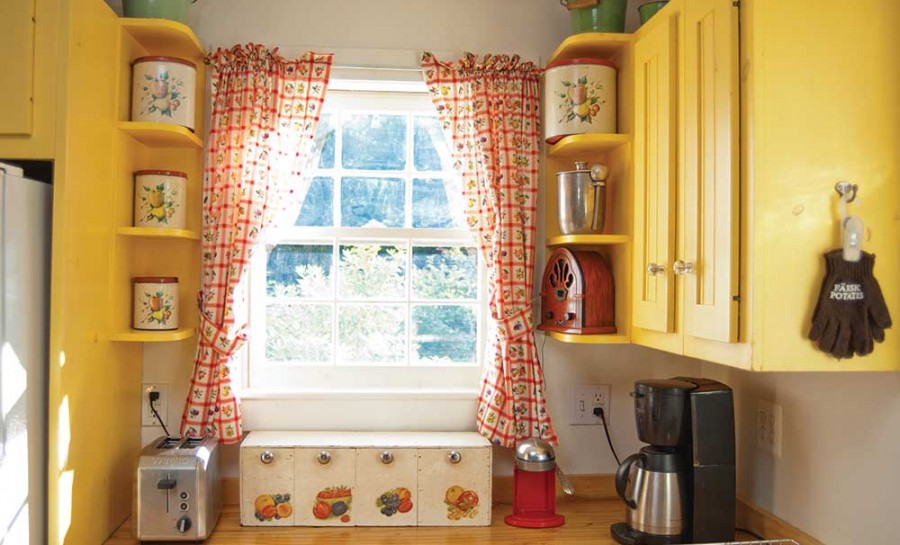 The kitchen is haven to our emotions. It’s the place for late-night bites, or where we strive to impress guests. It’s the stage on which daily family drama unfolds, and where reruns of family traditions are played out. The ephemera of the kitchen can evoke powerful associations: an inherited apron, a well-seasoned cast iron pan, a pair of personalized mugs hanging underneath the cabinets, a favorite cereal bowl. Kitchens can be magical, too. In them ingredients are transformed, and the fruits of our gardens multiply our sense of bounty. It’s no wonder children aren’t given toy living rooms to play with, but miniature kitchens. Kitchens provide an outlet for our imaginations.

It’s this special charm that may begin to explain the trend in vintage kitchens, and the desire to transform the space into a time capsule of bygone years. It’s common to see modern kitchens detailed with antique farmhouse decor, the bulky but reliable fixtures of the 1930s and 1940s, or the cheerful posters and canisters of the mid-20th century. According to Bill Schaefer, owner of Rhinebeck Kitchen & Bath, vintage designs allow for the best of both worlds. “It keeps the charm of the home yet gives modern conveniences, like drawers that actually work,” says Schaefer. “There’s always a market for cabinetry that looks like it was installed the day the house was built, no matter how old the house is.” 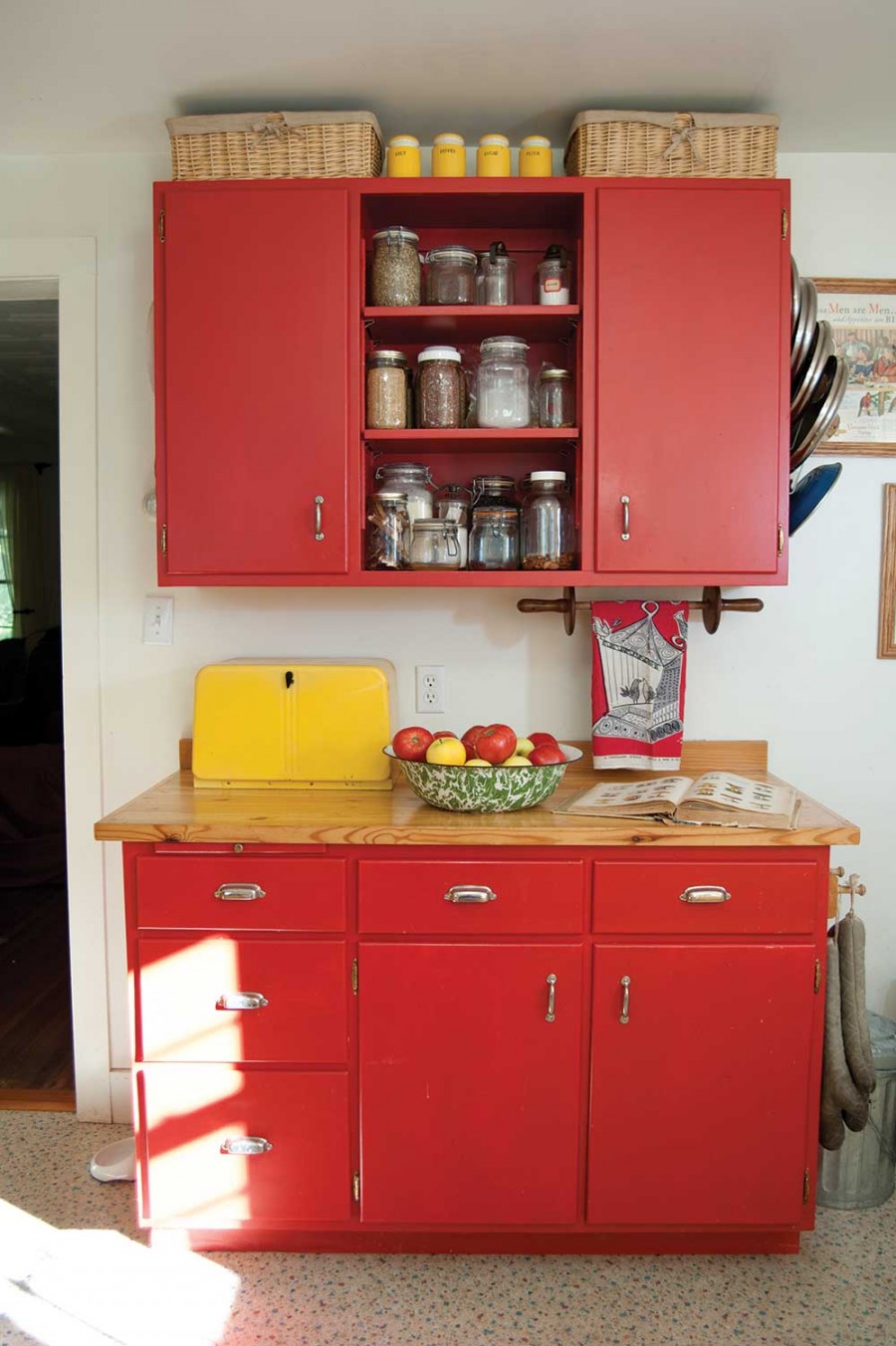 In a historic region like the Hudson Valley, there are plenty of old houses that inspire vintage looks. Allison Keck, a design consultant for Herzog’s in Uptown Kingston, says that people often request the older, traditional styles that match the city’s 18th-century architecture over more contemporary looks. “We have a company, Tebo, that makes very traditional patterns but can be retro and modern at the same time,” says Keck.

“As long as you keep it all subtle, it manages to work,” says Timothy Dunleavy of Rural Residence, a housewares and antique shop in Hudson. “Vintage textiles and furniture can warm up a modern kitchen and make it seem more lived-in, with a sense of time in the setting, rather than just things that came out of a box.” The items at Rural Residence are made new, often based on oldfashioned designs such as floral embroidery or red plaid weave, but Dunleavy also carries Romanian-made antique hemp placemats, cut from material that was originally woven for production of grain sacks 50 to 100 years ago. Their natural look is especially pleasing against an antique tabletop. “Most of our stuff is understated,” Dunleavy says, like modern French-made silverware with Lucite handles in bone, black, or taupe, hearkening back to the 1940s.

Dunleavy finds that, of his customers with nostalgic tastes, more are oriented toward “Downton Abbey” than toward “Mad Men.” “Some want to be Donna Reed, some want to be Lord Grantham,” he muses. “Everyone’s equally excited by what they buy.” But according to Bill Schaefer, contemporary styles are experiencing a resurgence, like mid-20th-century-style kitchens that draw on the energy of bright colors. “Adding retro elements to a kitchen can really add a sense of fun,” comments Phoenicia-based interior designer and realtor Faye Storms, who owns Blue Barn Antiques. “I use colorful ’50s dinnerware as wall decor, hand-embroidered linens with whimsical motifs for towels, and boldly colored appliances to liven up a kitchen.” According to Storms, colors to look for include apple green, Chinese red, turquoise, lemon yellow, citrine, teal, and orange. “Accent it all with silver metallics for a great pop,” she says. 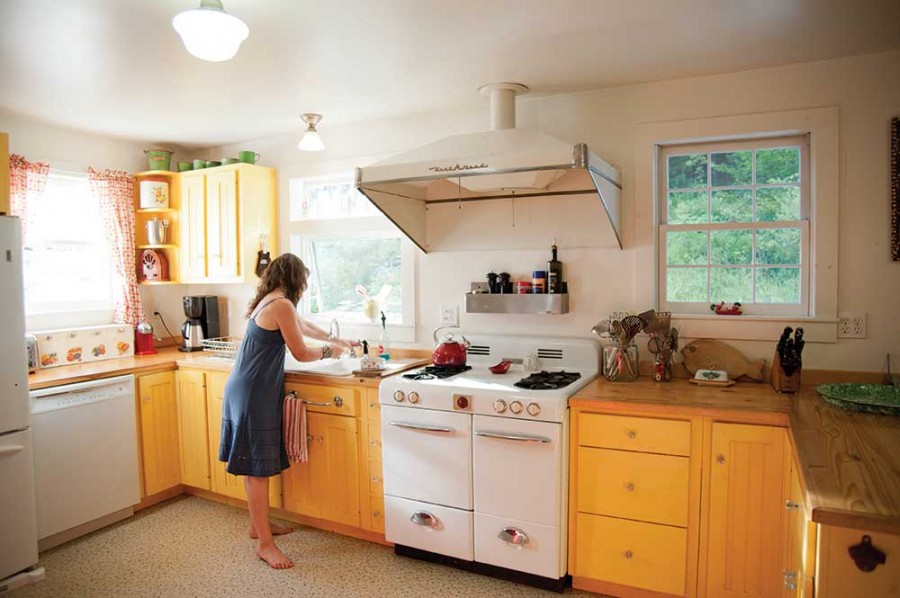 When it comes to vintage styles, though, it doesn’t have to be a matter of either/or. For Laurie Osmond, a video producer and writer who grew up in an old farmhouse on Long Island, creating a vintage kitchen was a labor of love.  She bought an 1860s house outside of Woodstock and began renovating it in 2001. Osmond kept the historical ambiance of the house, but had a different vision for the kitchen. “I wasn’t going to do some twee late 19th-century kitchen that was unusable,” she says. While trying to avoid a clash of time periods, she felt there was justification for putting a 1940s-style kitchen into a house almost 150 years old—not every item in a kitchen has to come from the same decade. “The built-in kitchen was a post war thing,” she observes. “People wanted everything new, modern, and uniform. I wanted my kitchen to look lived-in and added on to as styles changed.”

Because her kitchen had to be torn out and rebuilt, Osmond had the opportunity to start from scratch. The centerpiece of the room is the 1940s stove she saw advertised on the street in Woodstock when a building—now the Woodstock Apothecary—was being renovated. She had been living in California, where sets for sitcoms provide plenty of business for shops that refurbish antique appliances. To her dismay, she couldn’t find such a service in the Hudson Valley. “I lived with the stove for about a year without using the oven,” Osmond recalls. “When I turned it on, it would automatically go up to 600 degrees. Finally, through the Old Appliance Club online, I found someone in Troy who fixed it for about $900.” Osmond loves her massive white stove, which she says cooks almost as well as a professional range but cost her much less. “It’s reliable and powerful, and it will probably last another 50 years.” It took nine months of perusing eBay to find a 1949 Venta-Hood range hood that came out of a Texas kitchen. It’s slightly wider than the stove and works just fine.

Because Osmond had a limited budget, she bought her solid pine cabinets from Home Depot. The simple beadboard panel, featuring pairs of vertical grooves, is a style that was popular for Victorian cottages and lends a country farmhouse feel. The cabinets arrived unpainted and without knobs. Because the room gets no direct sunlight, Osmond chose a cheery yellow hue that lightens up the room. After spending hours “angsting over the handles,” she found hexagonal cut-glass knobs online at Van Dyke’s Restorers, which offers an abundance of replica antique hardware and furniture. The only major item salvaged from the original kitchen was a set of maple cupboards that Osmond believes date from the late ’60s or early ’70s. The vinyl floor covering features a pattern from the ’50s that was briefly resurrected by Armstrong a few years ago. The speckles and blotches, blue and brown on a beige background, were designed to camouflage dirt—a practical aim in any era. 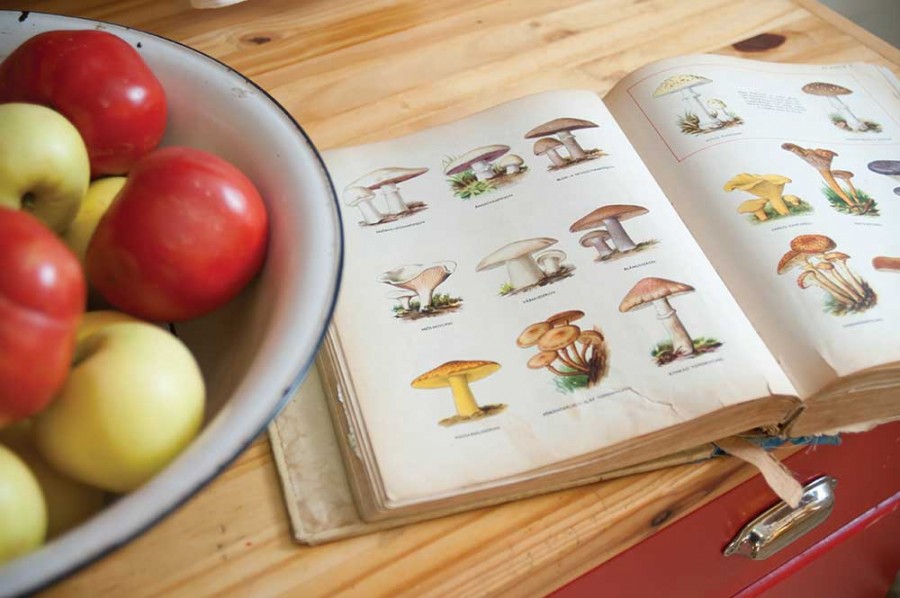 Many items in the room came from yard sales, such as sugar and flour canisters that perfectly match the yellow of the cabinets, white storage bins painted with fruit, an enameled metal drop-leaf table with a wooden drawer, and two almost-matching pairs of classic straight-back wooden chairs. Over the table is a collection of brightly colored outsider art, including a painting of a slice of watermelon that picks up the red of the chairs and cupboards. She mixed in a couple of her daughter’s elementary school drawings.

Osmond considered granite countertops, but she felt they would have looked absurd with the vintage furnishings, and she didn’t have the money. She achieved a more appropriate look with pine shelves, glued in pairs, with a wooden lip added along the edges. “I bought them at Home Depot—not in the kitchen department,” she notes. “I like to look at materials and use them in ways they were not intended for.” By the time Osmond was ready to buy a refrigerator, she could only afford a basic modern model. She selected white, so it wouldn’t stand out. When it’s on its last legs, she might spring for an antique replica. Although they were prohibitively expensive a few years ago, the prices are coming down. A few companies manufacture a ’50s-style fridge with rounded corners that have modern features like an ice maker.

Bill Schaefer notes that long ago, kitchens weren’t a main part of a home—they were located in the basement with big fi replaces for cooking. “With indoor plumbing,” he says, “you could put in a cabinet and a sink with a hand pump, and then add pieces to it.” Though kitchens have evolved considerably since the messy and demanding days of the open hearth and its heat, we’re still attracted to styles of the past. Perhaps the effect of all these vintage items, from stoves to drawer handles, whether going back 60 years or 160, is to create a kitchen that resonates with the past, real or imagined. Preparing and eating a meal in a vintage setting may link us in a sensory way to our younger selves, our memories, or even our ancestors. To evoke a time detached from our immediate lives also offers an opportunity to escape the real world for a little while—about as long as it takes to bake a pie. 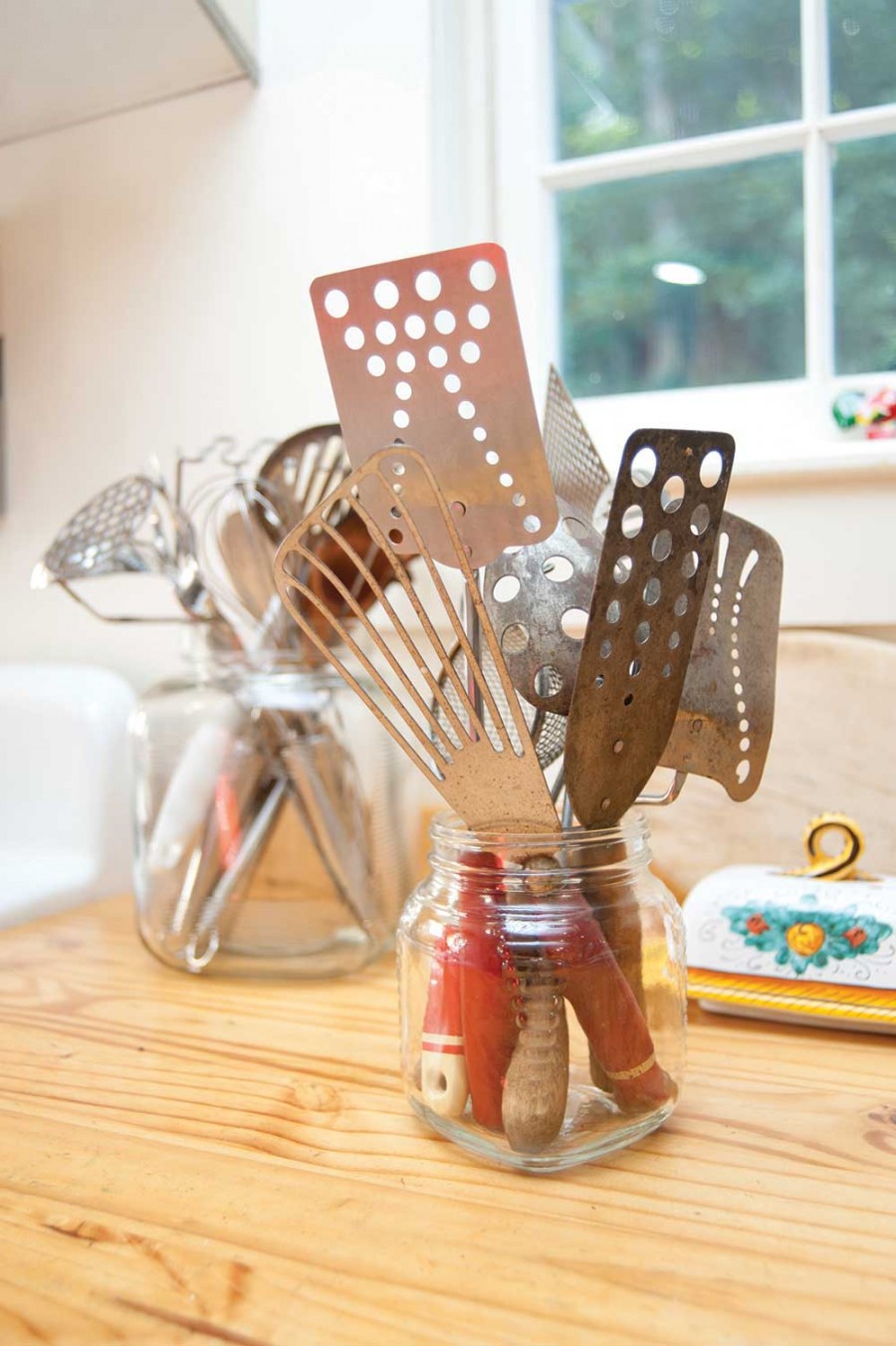