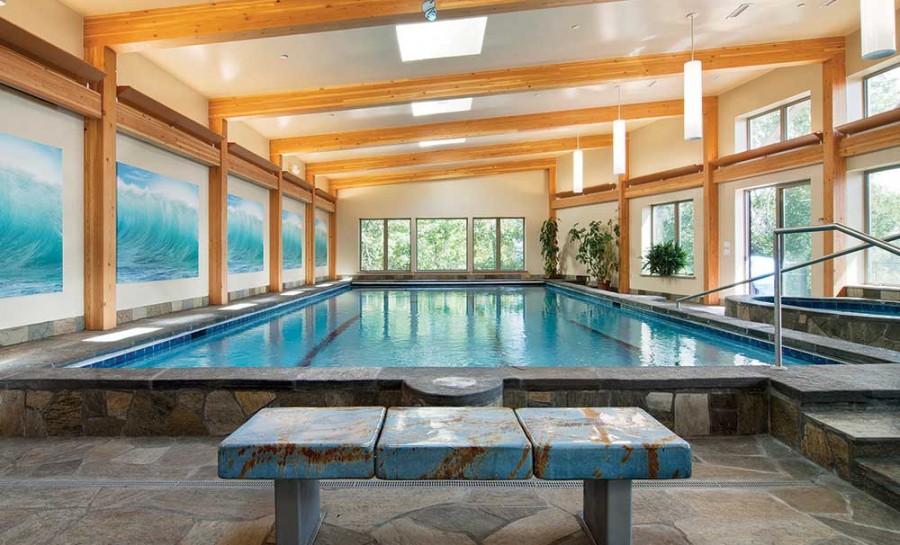 A pool is more than a place to swim—whether the focus is sociability or exercise, relationships are built and strengthened by water. In this newly built Putnam County house, the pool forms the emotional center of the home, anchoring the overall design. When the owners of the sunny, four-bedroom, five-bath post-and-beam home, a retired psychiatrist originally from Norway and an educator from New York, imagined their dream retirement abode, they wanted a pool at the nucleus because they benefit physically and emotionally from swimming together an hour a day. But their pool-centric vision proved a conceptual and technical challenge. By the end of the home’s construction, they came to count their architect as a friend.

The 6,000-square-foot house, which is recessed into bedrock, is designed to harmonize with its setting. The house is clad at the exterior base with native stone, found and hand-cut onsite. The high-tech synthetic clapboard siding, made of rot- and fire-proof fiber cement board (a stable mixture of sand, cement, and cellulose) is painted a creamy toast color. The metal roof is a soothing fir green. All of the major living spaces face south. Each room has a clear purpose and is exactly large enough and no bigger. One walks beside, not through, the various built-in structural arrangements, such as seating areas and parts of the kitchen. 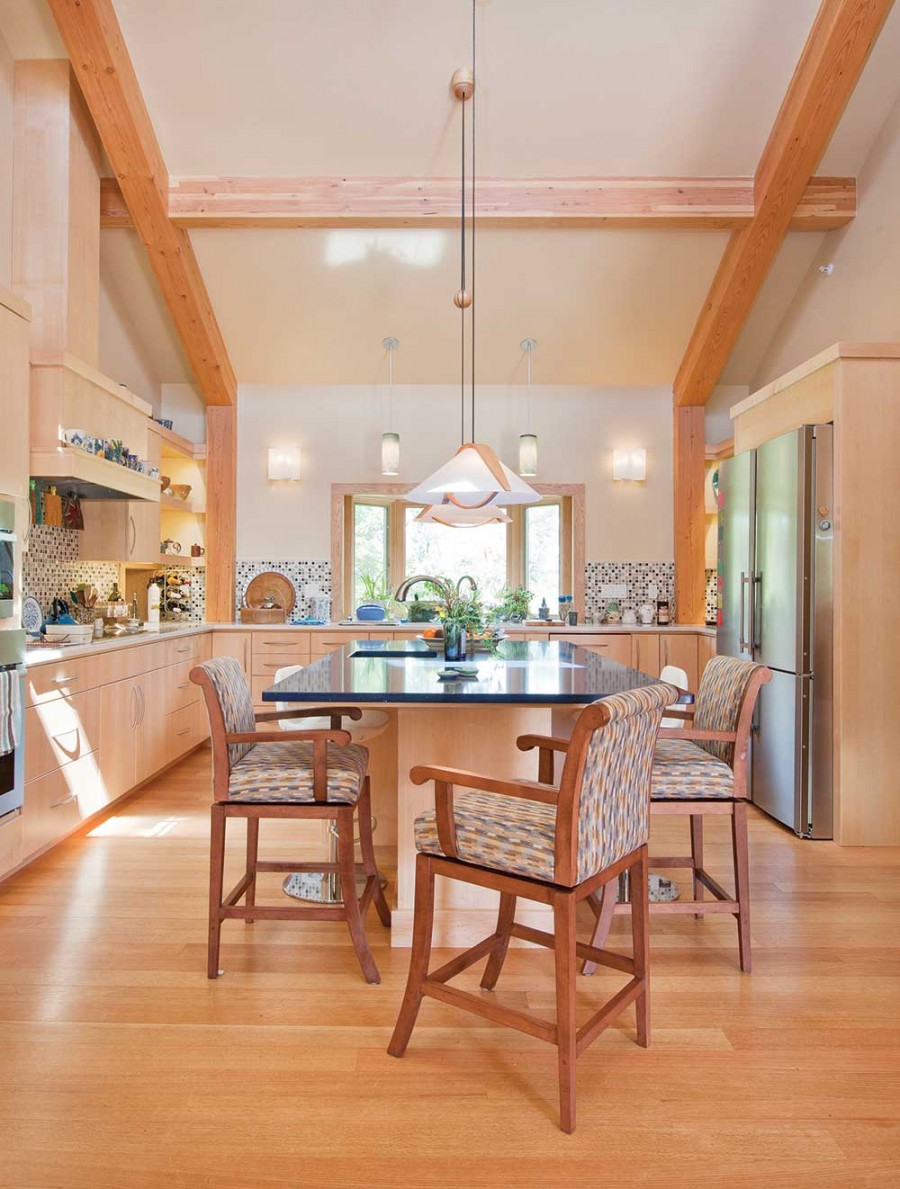 Because the octogenarian doctor swims more dexterously than he walks these days, the key spaces of the house are concentrated on the main floor, arranged in three distinct sections. There’s the capacious swimming pool wing, almost 2,000 square feet. The main living and kitchen area, and the master bedroom wing (which includes an office), meditation room, and laundry area total about 2,500 square feet. Accessed by either elevator or stairs, the downstairs holds a guest bedroom with full bath, a children’s bedroom, and a versatile third sleeping area. Upstairs, there’s a cozy “tower room” with a fireplace; the room opens onto a deck with a spectacular mountain view. An outdoor eating area across from the kitchen gets mosquito-proofed with motorized screens.

In coming years the landscaping will feature native ground covering that does not require mowing or much water, to complement the rock outcroppings and mosses that initially attracted the owners to the property. 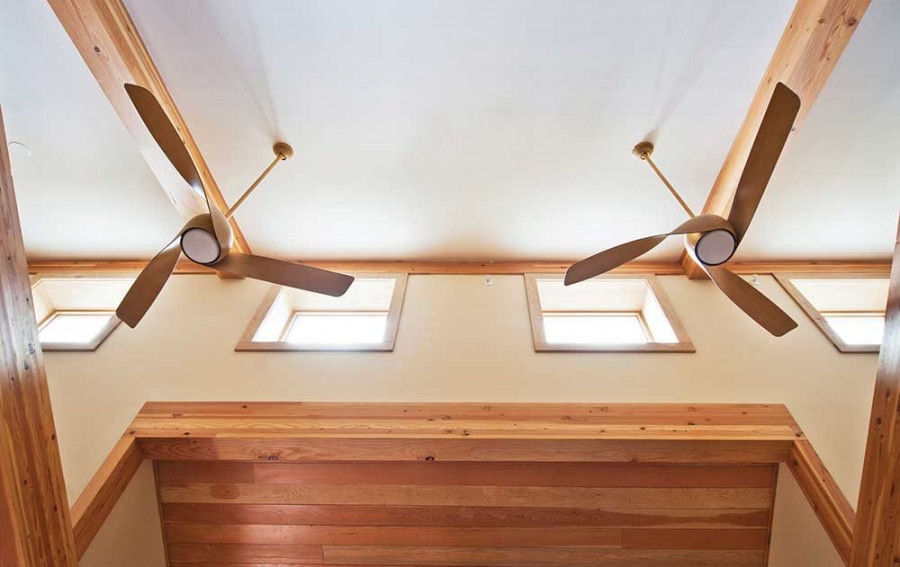 For much of their 43 years together, the couple, who met through friends, divided their time between a rented apartment in Manhattan and a traditional 1800s five-bedroom shingle in Amagansett. But over the years the Hamptons traffic and noise grew wearisome. Eventually, they decided they wanted to build an eco-friendly contemporary in the Hudson Highlands.

Five years ago, they found a secluded 15-acre lot in Philipstown perched about 800 feet above sea level. They hired top professionals, but grew unhappy with the first design. “We just weren’t on the same page,” says the educator, a no-nonsense woman in her late 60s who began her long career teaching math to young children in the South Bronx.

The doctor, an entrepreneur who once owned several businesses in New York, was frustrated, so he hired his former financial operations manager, Tom Kelly, to hire a new team and manage the project on-site. 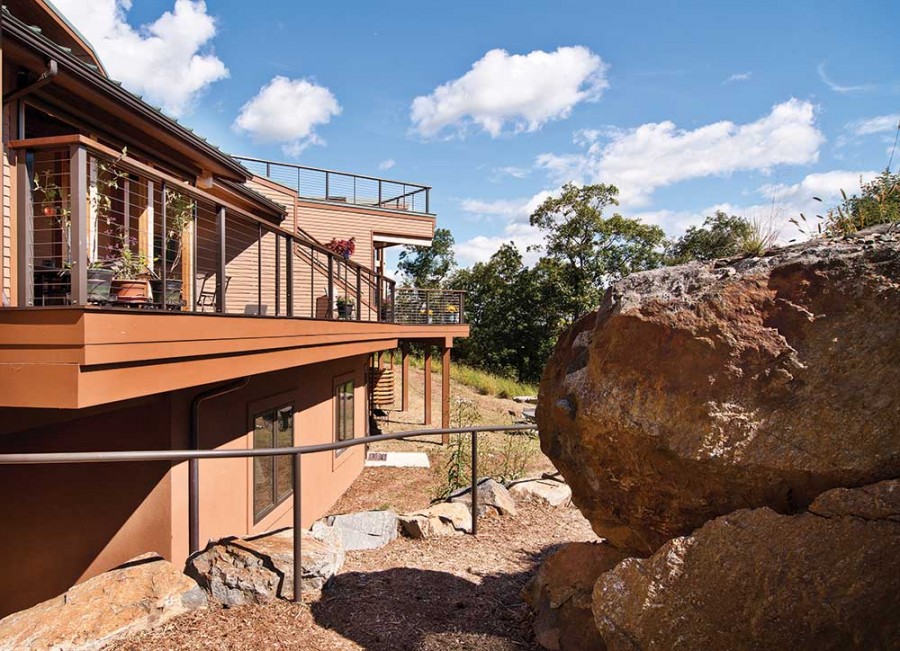 On impulse, the owners attended a meet-and-greet sponsored by New York House (a former incarnation of this magazine) in February 2011. There, they met several architects whom they auditioned to get the project back on track. They eventually chose to work with Alfandre Architecture, a New Paltz-based firm that specializes in the design of high-performance and environmentally responsible green buildings. Its sister company, EcoBuilders Inc., which built the house, is a general contractor and construction-management business.

The couple was committed to building in a way that considers the environment in as many ways as possible. “We quickly realized that [the firm’s principal architect and designer] Rick Alfandre could deliver on our plan to build in the most environmentally sustainable way possible,” says the educator. A strong working relationship mattered too. “We clicked,” she adds. “Rick immediately understood our vision, and he knew how to get it built properly,” says the doctor. “Plus, he brought a lot of great ideas to project we would not have come up with on our own.” 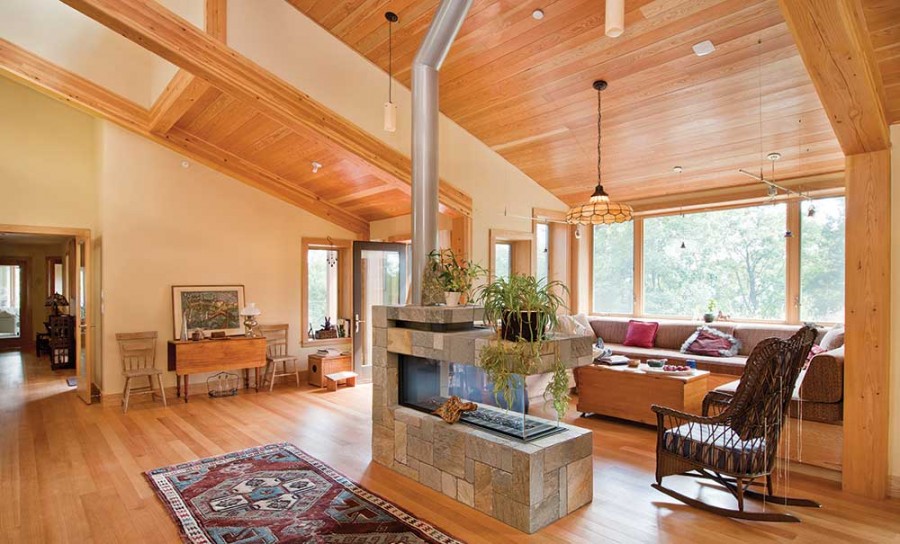 A big issue for the owners was the pool. “This isn’t a house with an indoor swimming pool,” Kelly jokes. “It’s an indoor swimming pool with a house.” Why was this so easy for Alfandre to intuitively interpret as the architect? “My Scarsdale grandparents used their outdoor pool together every day they could for 40 years,” he says. “I simply understood the priority.”

While the stresses of budget, construction, and design decisions cause many couples to experience personal turbulence during the building process, this couple, unmarried though they lived together for four decades, quietly tied the knot during construction. “Rick, who is now our dear friend, kind of insisted,” jokes the educator. “We recently celebrated our second anniversary.”

To cut down on transportation and fuel usage, the green aspect of the project began with hiring a local architect and building contractor. Next, the owners bought whatever they could from local suppliers and manufacturers. The beams, the structural insulated panels used for all the exterior walls,and whatever new furniture purchased to complete the home were all made in New York, New Hampshire, Vermont, or Connecticut. The wood floors are all red oak sourced in the Northeast. The rustic oak bathroom vanities are cleverly fashioned from trees cut to clear the building site. 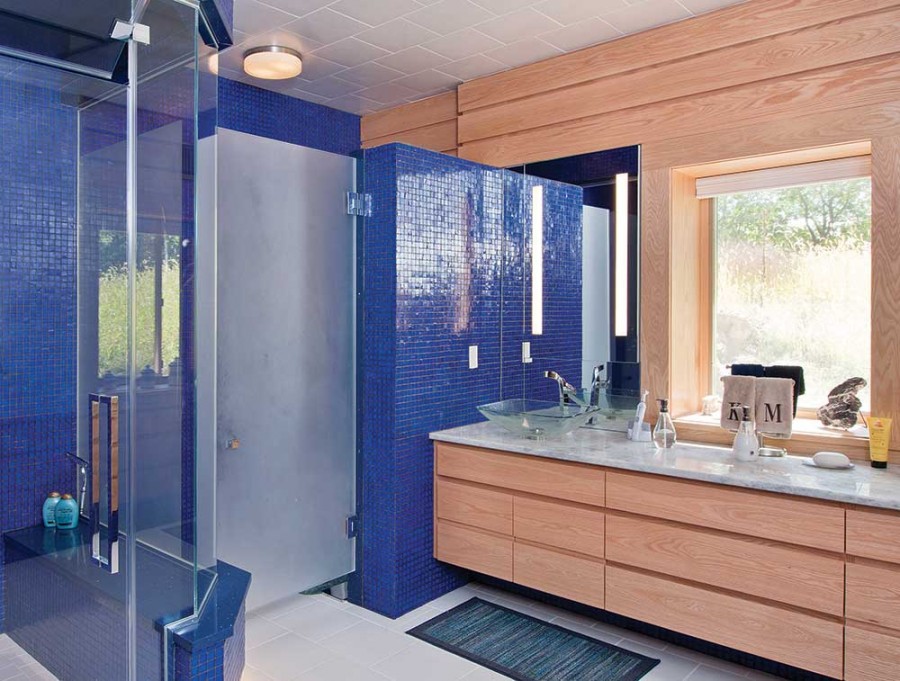 The owners did much research to find the least toxic, most energy efficient fixtures and appliances, searching out the highest-available Energy Star ratings. Solar panels provide about half the home’s electrical needs. The chemical-free pool, which is heavily insulated, is mechanized for maximum efficiency. Throughout the house, the faucets boast water-saving features and meet strict lead-free requirements. In choosing lighting fixtures, the owners selected models using LED bulbs wherever possible. They bought from companies with reputations for enduring performance and quality, such as a German-made Miele washer and dryer.

The fireplace uses a closed-loop ventilation system that permits only heat to enter the room, not fumes from the burning propane. Similarly, no heat escapes out of the living space through the chimney. “My favorite place to sit and read and look out the window is the living room nook,” says the doctor. There, I can also enjoy the beautiful glass-walled fireplace.”

The bedroom mattresses are made from natural organic rubber latex with certified organic cotton and wool batting—no chemicals, polyurethane foams, or wire springs. The interior and exterior paints are all VOC-free. The wood shelving and cabinets selected do not offgas, and many of the decorative fabrics are organic. “We already owned most of the furniture,” says the educator. “So it had outgassed years ago.” 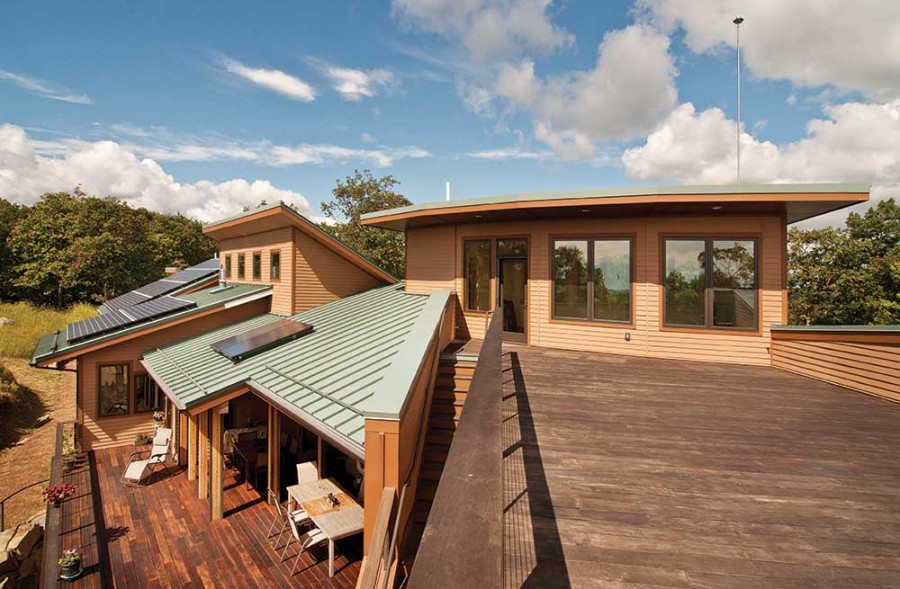 Interior Designer Michele Sayres of M. Sayers Design based in Millbrook, assisted the owner with many of the home’s finishing touches. She is an expert on Feng Shui, the Chinese system of creating spaces and positioning objects to maximize the healthful and auspicious flow of chi, or energy, and brought that sensibility to the project.

The educator is particularly enamored with the way Alfandre used light as a design element throughout the house. Over 70 triple-glazed windows open the building envelope to the surrounding landscape. “Our Amagansett house was dark, with small windows, so we wanted this house to have a lot of light,” she explains. “Rick was really thoughtful in the way he positioned everything, so we have amazing views year-round, and it makes the most of the passivesolar effect, too.”

The house project has been a pleasurable process to the owners and the architect alike. “To me, there is such a sense of belonging in nature about this place,” says Alfandre. “And the silence! It’s wonderful. This is a dream construction site and these are ideal clients. It just doesn’t get any better.”

The doctor resorts to his mother tongue to describe his experience. “Godt fornoyd!” he says. “That means ‘well-satisfied’ in Norwegian.”