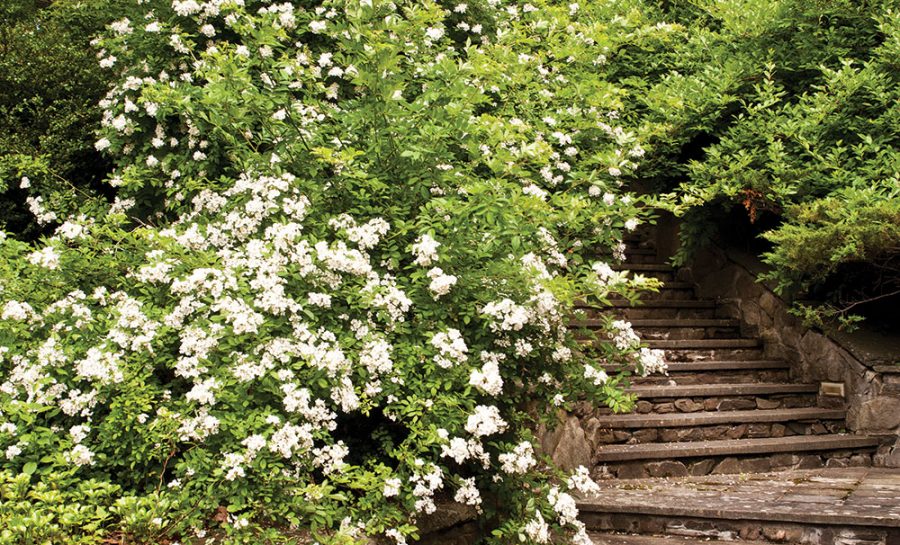 It’s fitting that Milton Glaser, the world-famous graphic designer, known for expressing the essence of both New York State and the Woodstock Festival in single images—the I ♥ NY logo and the psychedelic poster of Bob Dylan, respectively—should live in an iconic house in Woodstock, historically home to artists.

Glaser and his wife, Shirley, have owned the house and its surrounding 79 acres since 1962. While Glaser is also the co-founder of New York magazine, Shirley is an author and photographer.

Their house, at 148 Lewis Hollow Road, is definitive of the Arts-and-Crafts style popularized in the late 19th to early 20th century. It’s resplendent with the gabled roofs, stone columns, and hand-crafted woodwork that reveals delightful surprises. 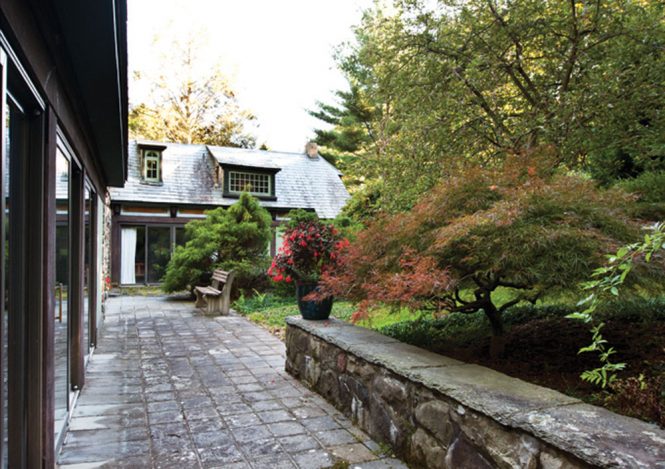 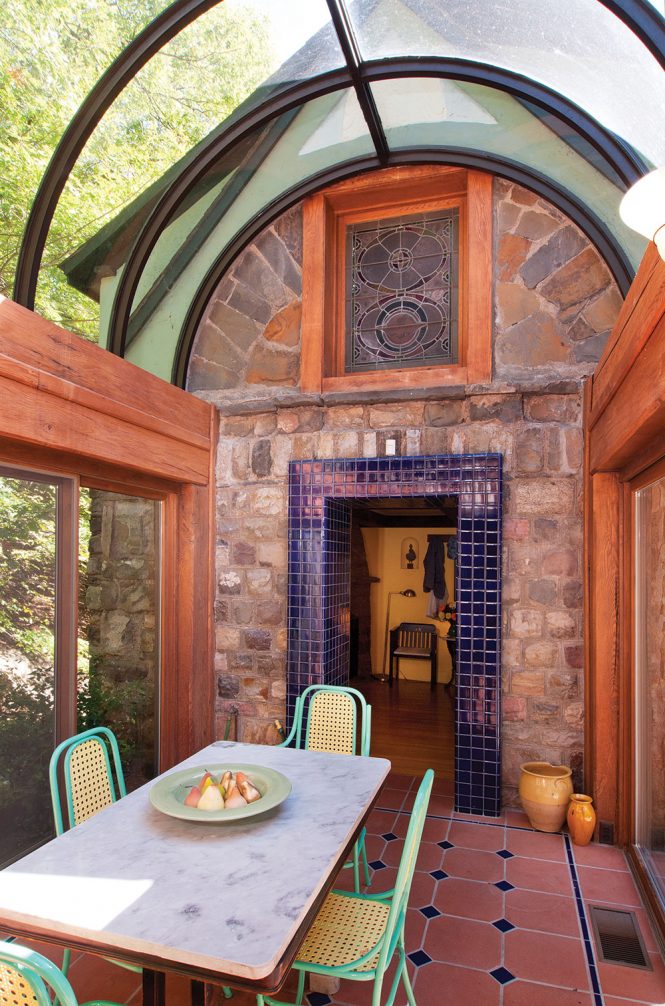 The Glasers discovered Woodstock in 1959, when they began visiting friends there, frequently sleeping in corn cribs. Through their friends, they met Louise Hasbrouck Zimm, the widow of sculptor Bruno Louis Zimm. During the Great Depression, the Zimms had purchased what was then a small circa-1840s cottage, and Bruno Zimm had begun renovating the house.

Zimm’s work is steeped in the arts-and-crafts tradition. He carved totems to top the stone columns framing the house and intricate images of woodland creatures to compose the frame of the front door. If you look closely, you’ll find faces on the wooden columns and wooden birds peering from beneath the house’s gabled roof.

These whimsical touches, along with the vast, calming forest that surrounds the house, enchanted the Glasers. So when they heard that Hasbrouck Zimm was selling the house, they approached her as she sat in a wicker chair outside the front door. 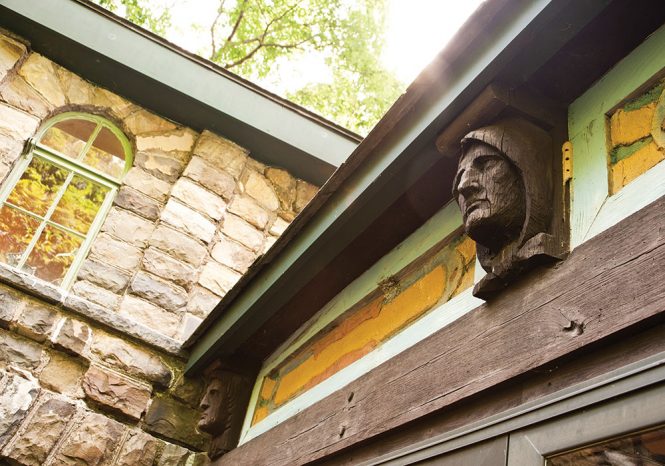 “Milton said, ‘We’ll take it,’” Shirley recalls. “And Louise said, ‘I suppose you want to see inside?’”

The interior combines Bruno Zimm’s masterful eye for detail with the Glasers’ love of the Mediterranean style.

Poetic messages carved by Zimm in stone and wood adorn two fireplaces, which still stand in the living room and dining rooms, both of which remain from the original house. The living room also includes the original staircase—its hand-carved post resembles rope knots—and a small alcove decorated with Italian-inspired patterned tile.

The two-level kitchen is made for versatility. A raised platform holds a galley kitchen with ample counter space, wood cabinets, a contemporary range, and built-in storage. The lower level can be used as a secondary dining room. Both spaces are dressed with tile flooring to reflect simple Mediterranean living. 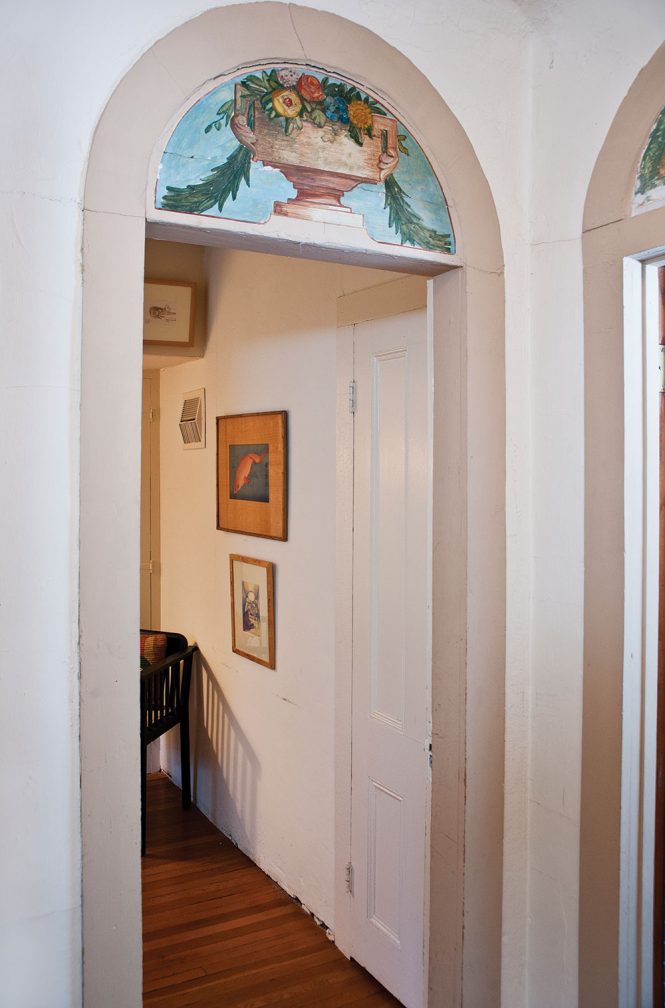 The downstairs studio space is massive, and could be converted into a substantial master bedroom. It features radiant heat, tile flooring, and floor-to-ceiling windows that open to the backyard’s in-ground, heated pool.

Upstairs are three comfortable bedrooms, including the current master, which features a stained-glass window looking out to the sunroom.

The sunroom, with its wooden frame and tile floor, is blanketed by natural light thanks to its arched glass ceiling. The space acts as a bridge from the original Arts-and-Crafts structure to the focal point of the addition: a 50-foot-long great room with gabled ceiling, tall windows, and a black-and-white tile fireplace that commands attention. It’s a perfect space for gatherings.

The entire property is designed as much for solitude as it is for friendliness. Shirley began gardening on the property in 1962, and her work has produced clusters of mature hydrangeas, crabapples, and Japanese maple trees that help enclose the property from the outside world. You can sit on the bluestone patio and gaze for hours at the flora, she notes. 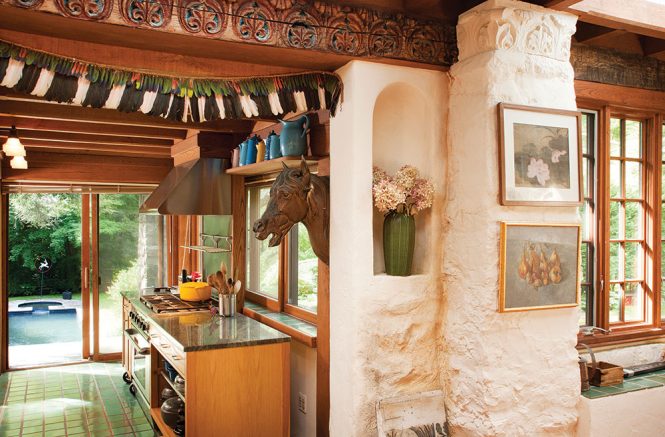 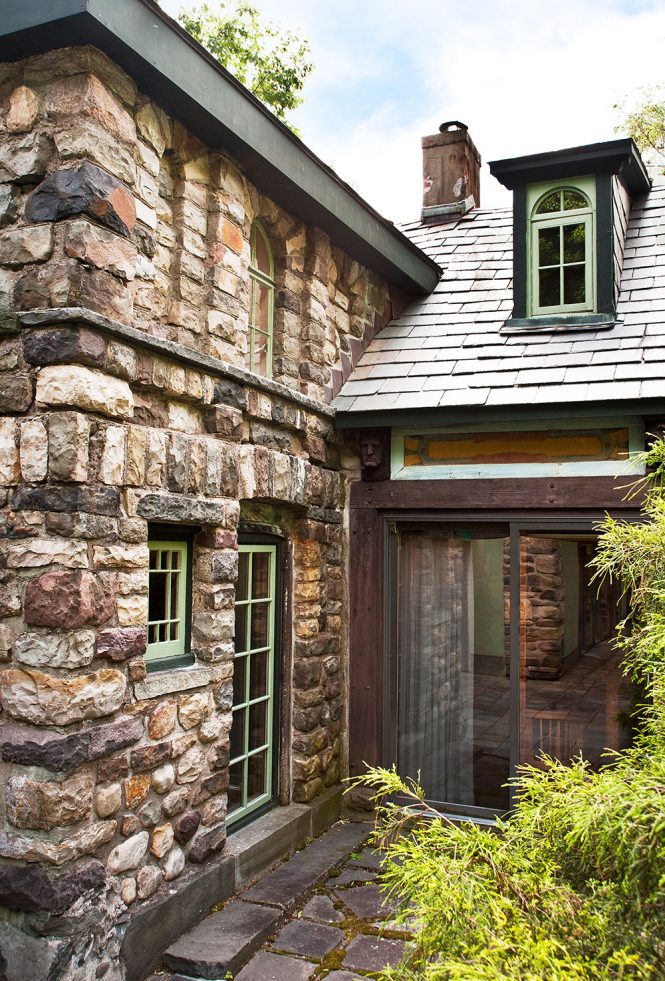 “You can’t see any aspect of civilization from this vantage point,” says Milton. “You’re really protected, and in a quiet environment, hearing only birds and seeing animals. There’s something primordial about it that makes you very happy.”

But the Glasers’ house is as convenient as it is private and secluded. It’s located about a mile and a half from the center of Woodstock, which bustles with an artistic energy—thanks in part to the Glasers for keeping such creative company over the last six decades.