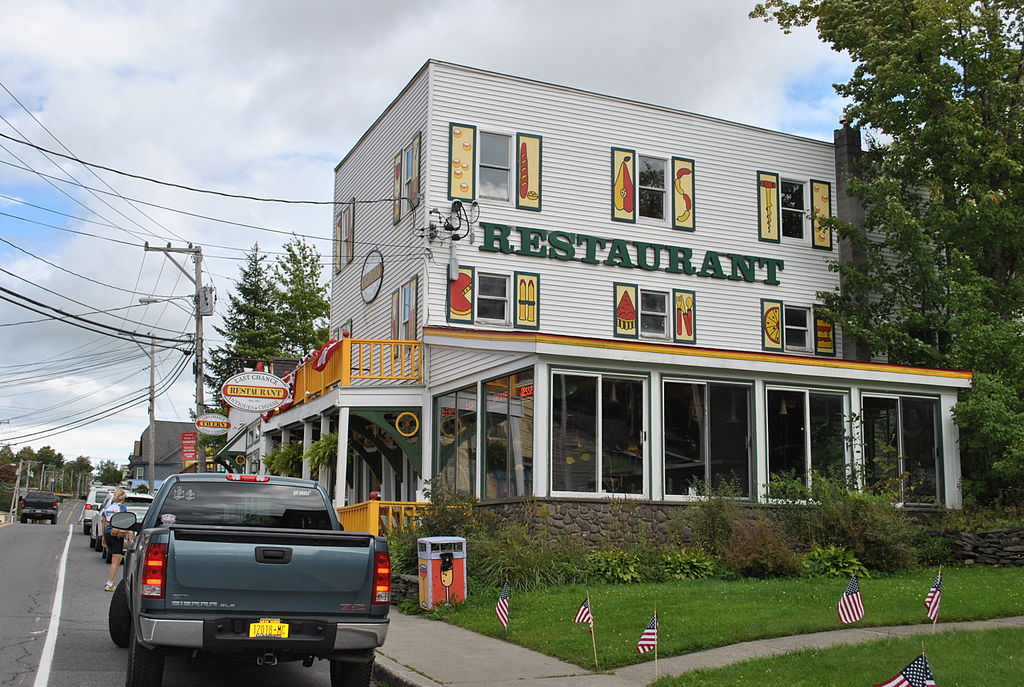 Transportation: Hunter is about half an hour from the New York State Thruway, via either Exit 20 (Saugerties) or Exit 21 (Catskill). The Hudson Amtrak station, with regular service to New York City and Albany, is 45 minutes away via Rt. 23A and the Rip Van Winkle Bridge. The nearest airports are Albany International (1 hour, 13 minutes) and Stewart International in Newburgh (1 hour 17 minutes.)

Perched atop the eastern High Peaks of the Catskills, the town of Hunter includes the incorporated villages of Hunter and Tannersville and the hamlets of Haines Falls and Elka Park, lands so hilly and wild that indigenous folk hadn’t settled them. The Platte Clove, also known as the Devil’s Kitchen, requires absolute alertness from hikers and drivers alike, rife with perilous switchbacks and sudden drops—but oh, those views. This is the landscape that summoned artists to tramp into the wild in the 1800s and birthed the Hudson River School.

Settlers showed up via either Platte, Kaaterskill, or Stony Clove and started subsistence farms; tanneries, lumber mills, and furniture makers arose among the ample hemlock, hardwood, and running water. At the end of the 19th century, railroads carried tourists to the mountaintops; tourism became and would remain the area’s lifeblood, declining when the Catskills fell out of fashion for a time and came roaring back with the coming of ski resorts on Hunter and nearby Windham Mountain.

The boundless resourcefulness of mountain folks is no myth, and the 21st century has been defined by the community-building efforts of smart nonprofits. The Hunter Foundation, founded in 1997, works with businesses, the school district, and likeminded agencies to bolster vibrant communities. The foundation operates a farm, Fromer Market Gardens, which saw a 27-percent revenue increase in 2020 and donations of 500 pounds of food thus far during COVID; the Colonial Country Club, which recently instituted night golf and has seen membership soar and revenues up 44 percent; and the Tannersville Antique and Artisan Center, which has found purchasers for over 2,700 pieces from 35 members this year, all while officially shut down. All Hunter Foundation properties stay on the community’s tax rolls. In the works are a community kitchen and culinary hub, and the restoration of Tannersville’s Gooseberry Creek and Rip Van Winkle Lake for communal recreation.

The Scene in Hunter

“I’d say Hunter has taken 2020 in stride,” says Jason Dugo, a 25-year area resident. Born in Rockland County, he first came to the area as a teen to ski and snowboard. Trained in hospitality, he traveled some, but the Catskills called to him and he now lives near the Hunter town line with his three kids and four dogs, selling houses. “We have four-season ecotourism to die for,” Dugo says. “But really, between swimming, hiking, camping, golfing, breweries, wineries, festivals—we used to have a shoulder season when it was slow, but that’s gotten a lot shorter.” 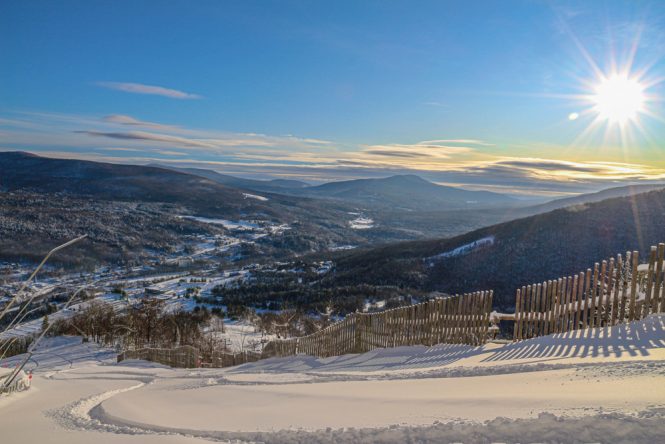 Besides hosting naturally socially distant fun like skiing and snowboarding, Hunter Mountain Resort is “capable of doing just about everything outside,” Dugo says, with patios, outdoor bars, and beer gardens, food tents, and roaring fire pits. “It’s a wonderful atmosphere,” he says, “and lots of people who have never even gotten on skis go just for the camaraderie.”

The resort’s far from the only choice. Hunter’s dining scene in both villages is robust and practiced, with mainstays such as Maggie’s Krooked Cafe, Last Chance Cheese and Antiques, and Pancho Villa’s. Recent years have seen the addition of new favorites: Jessie’s Harvest House, Deer Mountain Inn, and Prospect at Scribner’s Catskill Lodge magnetizing a “whole new demographic, a new vibe. Hunter was already becoming a thumbtack on a lot of people’s world maps, and as people look to settle, the notoriety has stuck,” Dugo says.

Cultural highlights include the Catskill Mountain Foundation’s Doctorow Center for the Arts in Hunter and the Orpheum Film and Performing Arts Center in Tannersville, both eagerly awaiting the abatement of the virus to roar back to life. The foundation also operates the Piano Performance Museum, a gallery and bookstore, and a natural farm and arts education programs at its Sugar Maples center for Creative Arts. The Peace Village Learning and Retreat Center is offering online retreats, undoubtedly exposing still more newbies to Hunter’s wonders.

The Mountaintop Library has been offering curbside book pickup six days a week at two locations, running a food drive, and hooking locals up with free meditation and mindfulness teaching and free access to Ancestry.com. Its Free Stuff Cart circulates books, movies, puzzles, and crafts, and socially distanced activities are going strong (a story walk focused on mushrooms and a Rip Van Winkle Halloween were on the program in late October.)

The Mountain Top Arboretum is 178 acres of public meadow, forest and garden space with an education center focused on the region’s ecosystem and native plants. And at Wellness Rx LLC in Tannersville, you can get your prescription filled, your blood pressure checked, and access to a broad and deep base of holistic wisdom on incorporating natural wellness into your health care.

“You don’t have to love sports to love the Hunter life,” says Dugo. “This is a great place to just come do nothing. The villages have that lively downtown feel, you can find what you need, and then as soon as you go down a side road you’re in the wild, with gorgeous curvy roads. This is not the suburbs.” To improve access to all that beauty and lessen risks, the state recently installed an ADA-accessible viewing platform at Kaaterskill Falls.

“We have a nice, diverse group of new families joining us in paradise here,” says real estate agent Phillipe Uhrik, who works with Win Morrison Realty. “People started as weekenders and then got hooked, and it’s been trending up for five years or so—now it is flat out on fire. Stuff’s going for $50,000 over market; people are laying down big bucks to get a patch of land. The average used to be $10,000 an acre for raw land; now the low end is more like $20,000, up to $30,000 in some cases. If you see something you love, don’t wait.”

At the end of October, the median listing price in Hunter was $332,000 on Realtor.com, but one and two-bedroom apartments near the slopes were listing for $30,000-$45,000 and a few smaller freestanding homes, as well as condos, town houses, and fixer-uppers were priced under $200,000. Between $200,00 and $400,000 you’ll find fancier condos and a few larger houses, some with views. Stylish contemporaries and larger updated farmhouses with acreage and views start around $500,000.

Your widest mountaintop dreams can come true: two attached homes on a 10-acre spread, finished with granite and bamboo inside and featuring tennis and basketball courts, heated pool, and multiple fireplaces have a starting price of $1,699,000.