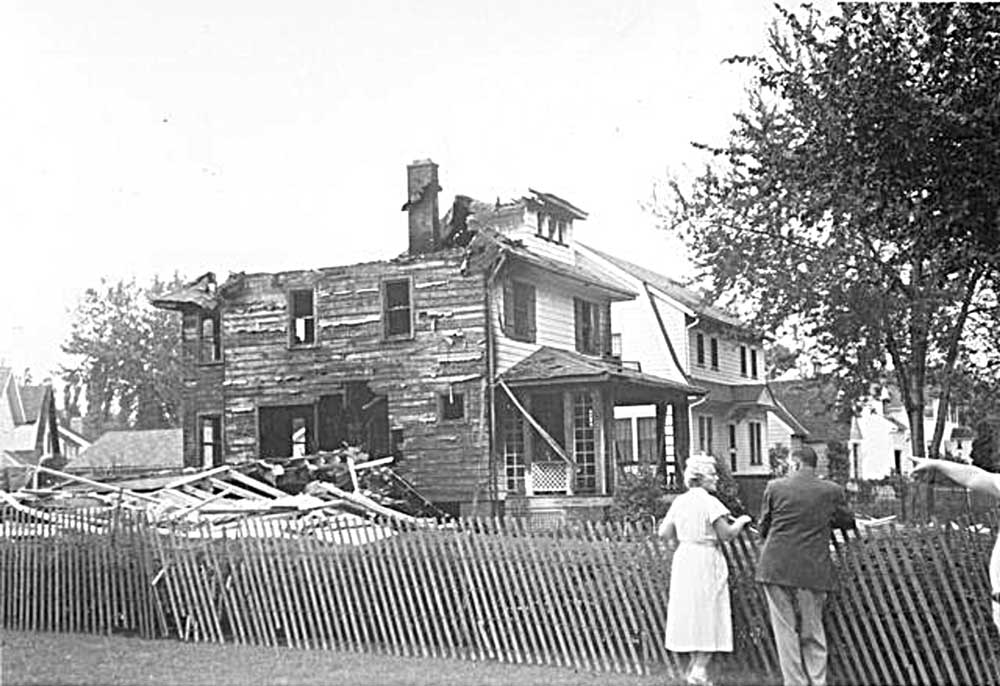 A family story I regularly heard growing up was recently repeated at the holiday table. My husband, ever curious, was inspired to look up the facts, something I had never thought to do. “On September 21, 1951 the Brighton Police Department was taxed to its maximum when 607 homes were destroyed or damaged by the Brighton Gas Explosion Disaster. Controls failed in a low-pressure, natural gas district and set off a series of explosions, which caused three deaths and staggering financial losses in the 12 Corners neighborhoods.” That’s from the Town of Brighton website. The Democrat and Chronicle archives added: “Shortly after 1:15 p.m. houses began exploding in rapid sequence in the Meadowbrook, Roselawn, and Bel-Air tracts.”

My family’s version of the story begins when my grandmother smelled gas and left her house on Varinna Drive with her small children, sensing something was wrong. She went to the school to find my mother, who was nine at the time. When she arrived, she found the children had been evacuated to the sports fields. My mother remembers they left the school together. Soon they heard an explosion and my grandmother remarked, “There goes our house now!” My mother always wondered how grandma knew it was their house, and how she managed to say it so evenly.

The story has some positive twists. The family rabbit was found, completely unhurt, protected by a window that landed over his cage shielding him from flying debris. Later he lost all his fur as a result of the shock and it never grew back.

My grandfather, a doctor, had just returned from the war. He had been working hard, and in the explosion he lost everything. My mother and the whole family lost everything. The girls lost their dolls, the family photos were burned. Everything was incinerated. Digging around in the backyard later they found melted silver spoons. There was nothing to do but start over.

Thirty years ago this story seemed to have no real moral. It was as if it was brought to the table to speak for itself. Maybe it means you can’t be too careful about having gas in your house—in fact you’d be wise to use an electric stove instead. I certainly heard my grandparents use that phrase often: You can’t be too careful!

Yet I’m sure there is something more important and more universal to be gleaned. What is the true meaning of shocking loss and mortal danger? This is a question we all grapple with at some time in our lives, no matter how much we try to avoid engaging it.

We all want to take our lives and our homes for granted. As one survivor of the explosions said to a his- torian, “Why do you want to bring this up? We just want to forget.” Yet forgetting is the luxury of those who feel secure. The old truism—change is the only constant— holds true here. Our houses, and the lives we build in them, help us feel good. They protect us from the cold.

Every organism carries the need for stability and to feel safe, as well as the evolutionary imperative to explore, take chances, and expand its territory, and this primordial polarity persists in our civilized selves. While we each want to feel safe at home, we also want to travel to new places. We like to order our favorite dish on the menu, but we’re tempted by the specials too. And in our houses we come to rely on the convenience of things being just where we want them, yet we can’t wait to renovate and try something different.

How can we unite the two opposing forces, security and exploration? In this issue, we visit a few intrepid travelers who took chances on the way to finding their ideal homes. There is Jenna Woginrich, the author and blogger who left her desk job to become a homesteader; Julie Hedrick and Peter Wetzler, whose artistic vision saw the potential in a derelict church they converted to home and studio; also Julia Ritchie, who bought a house because of its proximity to water, and discovered it was actually the proximity of good relationships that made her house meaningful.

I hope you enjoy the issue, and I hope you find your safe haven in the midst of this ever-changing world.