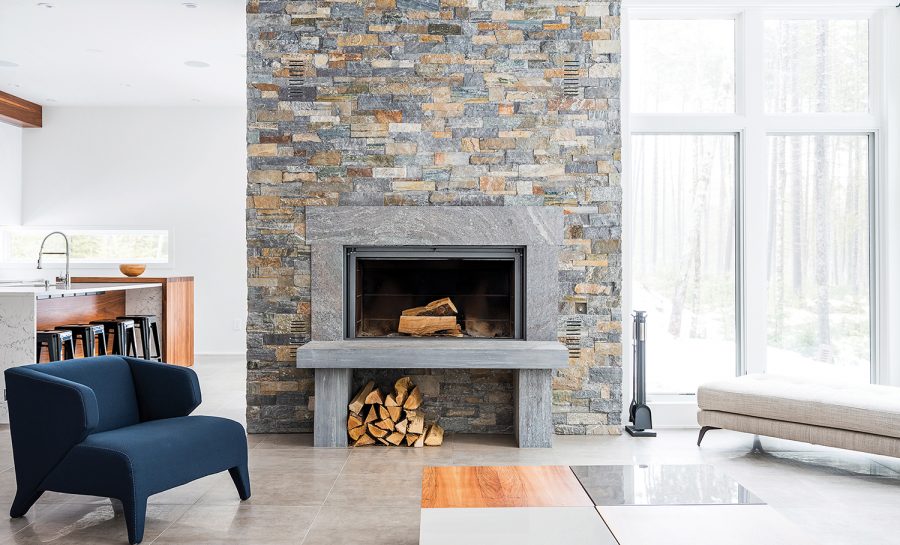 Mike Phinney was always a little precocious. His parents enrolled him in kindergarten at age four; he was 16 when he toured Rensselaer Polytechnic Institute and set his heart on going there.

“I was constantly drawing, and I thought I wanted to be an artist,” Phinney recalls. “I was also doing well in science and math, and a teacher suggested architecture. RPI was rated third in the country for architecture at the time, and they recruited me to play football.”

But the artist in him rebelled at the architectural fashions of the early 1990s. “It was the peak of ‘starchitecture,’ when you were supposed to buy this person’s giant sculpture and be grateful just to have their name associated with your institute or whatever,” he says. “It was all ego, no context, and I wanted nothing to do with it. I started seeking out professors who didn’t buy into it either, and [began] hearing more about sustainability. I decided to do my thesis on environmental awareness and did a lot of research. It was eye-opening.” 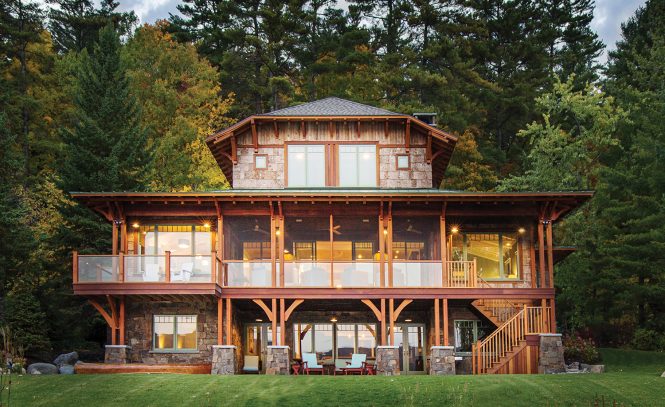 A private residence in Hague, New York, completed in 2016, is LEED Gold Certified by the US Green Building Council.

Green building was just starting to draw some buzz. “There were a couple of buildings being designed [in New York City] while I was doing my research—the Audubon headquarters, 4 Times Square—that were making news, and I just thought, ‘That’s for me,’” he says. “I was constantly outside as a kid. Dad had a Lake George marina, I was either on the water or skiing, hiking, or camping.”

After graduating from RPI, Phinney worked for WCGS Architecture in Albany and participated in the design and building of the state headquarters of the Department of Environmental Conservation, the first certified green building in New York State. “We did a lot of big office buildings, college buildings,” he says. “I wanted to bring what I was learning to more diverse projects, get more hands-on.”

In 2001, when Phinney and his wife Marci became frustrated in their house-hunting, they purchased 20 acres, and soon he was neck-deep in an entirely different kind of project: designing and building their first home. It was so inspiring that, in 2002, he resigned from WCGS. 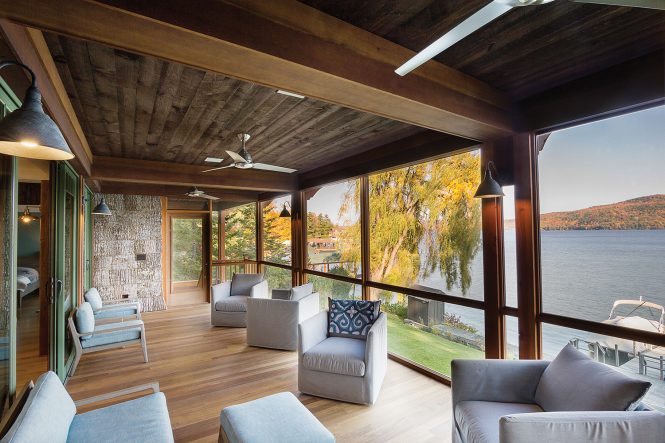 “My first client [couple] hired us after they saw my house, which wasn’t even done yet. She had chemical sensitivities, and I had studied indoor air quality in-depth. I sent a proposal and they said, ‘Let’s go!’ I hadn’t expected to get the job.”

Thus was born Phinney Design Group, based in Saratoga Springs, now  staffed with half a dozen LEED Accredited Professionals and three Green Associates. And as the 21st century unfolds, many of the standards that were groundbreaking when Phinney started out have become standard operating procedure and been written into New York’s building codes— so, especially for new construction, incorporating green features is not just the responsible but also increasingly the economical choice.

“It starts with what the site is telling us—the context, light, wind, and geometry—and how the building should respond,” says Phinney. “Eighty percent of green design is in those choices. If the geometry is right, the result will be aesthetically pleasing and easier to light, heat, and cool. The rest of it is 10 percent things that require a minimal investment, such as choice of building envelope materials, and 10 percent major investment, such as a geothermal heating and cooling system or a major solar array.” 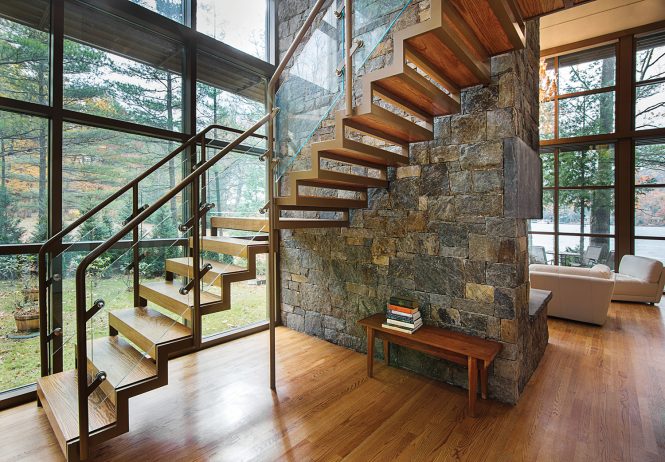 A private modern Adirondack retreat in Bolton, New York that won the 2016 Design Award from the American Institute of Architects Eastern New York.

“There are vapor retarders that dilate and allow the building to breathe; they’re developing smart building skins that react to the climate,” says Phinney. “We use a foundation spray that’s a rubber polymer, not petroleum-based tar that leaches into the ground. We tell clients,  ‘Here’s a list of materials you can choose, they all cost the same, but here are the ones that are better for your health and the environment.’ And they’re fine with that; it’s common sense.”

With its extremes of temperature and humidity, the Hudson Valley climate can test the highest-performance building envelope to the max, at least some of the time.

“It might be 10 below and 20-percent humidity or 103 degrees out with 90-percent humidity, and there’s a week or two out of any year when no matter what you do, it’s going to be kind of wrong,” Phinney says. “But in other ways, we’re in a fantastic location for this. We have lots of timber, stone, concrete, recycled steel. You can find local cabinet makers and blacksmiths and the increase in cost over buying something prefab from out of town is minimal at best.” 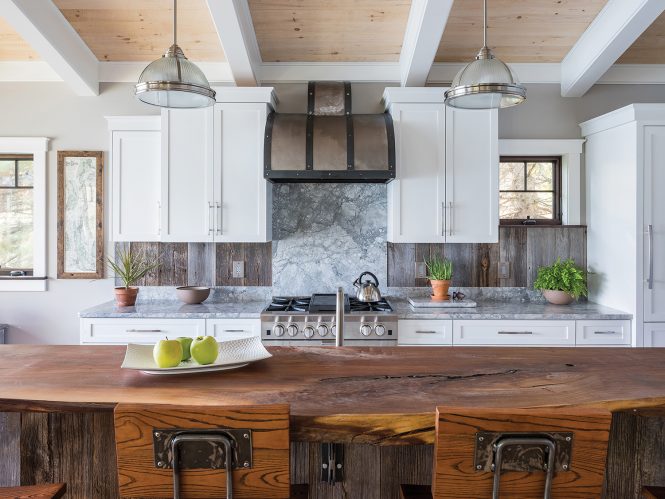 The interior of a home designed by Phinney Design Group.

Phinney’s aesthetic choices are as site-specific as the rest of the process, but tend toward reinventions of classic Adirondack and Arts-and-Crafts looks. He’s done low-slung, airy live-work studios at the creative retreat Yaddo in Saratoga, and a curved roof studded with solar panels for the Bio Building at the Natural History Museum of the Adirondacks in Tupper Lake, on which the solar panels resemble unobtrusive shingles. And he reimagined a privately owned  Adirondack “Great Lodge” with white oak taking the place of old-school dark paneling, playing beautifully with generous areas of glass. 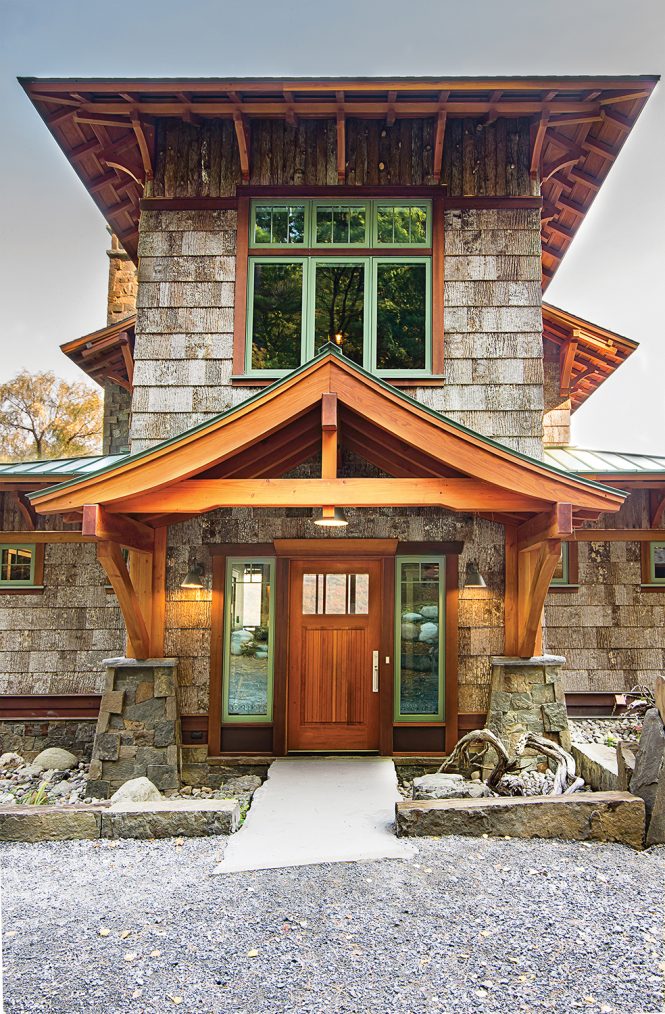 The exterior of another residence designed by Phinney Design Group.

But other clients may need some convincing because solar and geothermal systems are investments that typically take seven to 12 years to reap financial rewards, Phinney explains. Clients who choose them “often consider it an ethical commitment. A lot of our second-home clients look at it generationally: They’re investing in a legacy they want to pass down.” Although federal solar incentives are phasing out in 2019, when the same thing happened with geothermal, Phinney points out, the state took up the slack.

“It’s all about educating and informing,” he says. “We work with a broad variety of clients, and we incorporate what we call ‘sensible green design’ into every project, because it actually saves the client money. Every design firm should have that basic level of competence. To make the change, we need to make as a society we need to go big with this awareness: green infrastructure, green fuel supply and energy sources, public transportation. We need to think ahead, and some of it is going to have to be by law.”

But judging from his own experience watching green building move out of obscurity, Phinney has confidence that green building will become “‘the way it’s done’ before too long,” he says. “And I can make the business argument on a massive scale, to commercial and municipal clients: Here’s what you’re spending on this, here’s what that will cost, here is what you’ll be spending on water in five years and you’ll be in a  healthier, happier society. How can you not be a lot happier?”