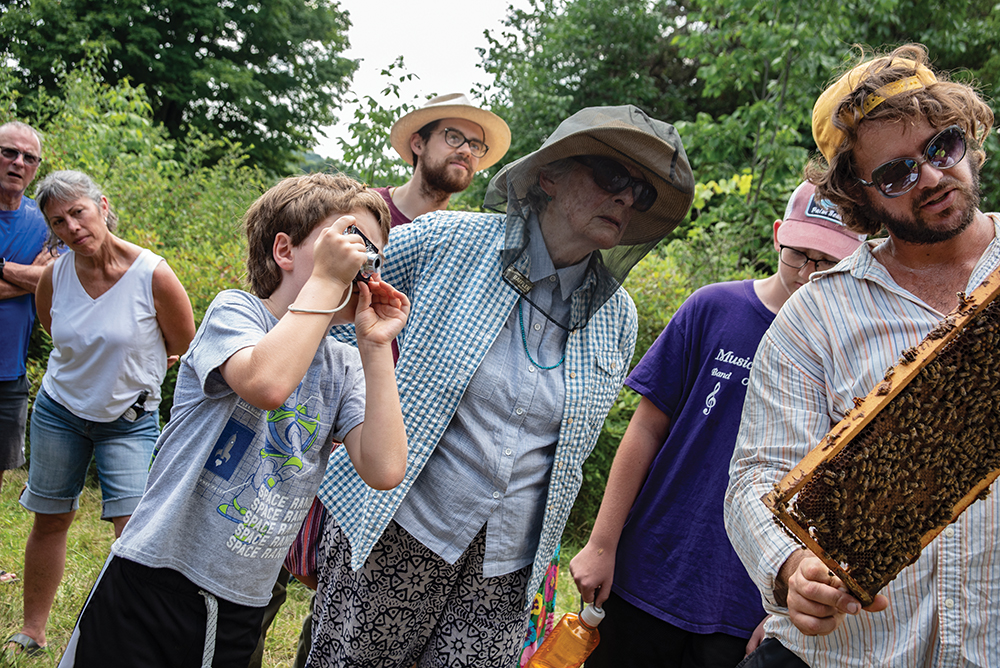 America’s farmland is being lost to development at a rate of about 175 acres an hour, for a total of 1.5 million acres each year, according to American Farmland Trust, an agricultural conservation organization. It’s a slow-motion crisis that’s loomed since the mid-20th century. Not only is farming labor intensive, unpredictable, and often not very lucrative, but AFT reports that the American farmer’s average age was almost 60 in 2012. So when an older farmer reaches retirement or passes away, with no offspring willing to take over running the farm, it often makes sense to sell out.

Yet a few places throughout the US are bucking the trend—among them Dutchess County, where a 2017 report from Cornell Cooperative Extension indicated that agricultural districts had grown by 19 percent in the previous eight years. Behind this surprisingly positive trend lies a concerted effort by environmental organizations such as Scenic Hudson, which started working on targeted strategic farmland preservation in the 1990s. The organization’s first target: farms in Red Hook, where the amount and quality of farmland presented a clear opportunity. Working with state, county, and town governments, Scenic Hudson began a program of purchasing development rights to keep land in farming. This has created opportunities for young farmers, who may not have an agricultural background but make up for it with passion, vision, and innovation—like Emily Eder and Maggie Thomas, both in their early 30s, who took the reins at Great Song Farm in Red Hook in early 2019.

Eder grew up in the Los Angeles suburbs. After studying environmental science, psychology, and photography at Sarah Lawrence College, she worked at Groundwork HV, a Yonkers-based nonprofit working to advance environmental justice. “So much of the work had agricultural aspects,” she says. “I connected an upstate CSA to a group in Yonkers, started a farmers’ market, taught cooking classes for kids and seniors, got grants for community gardens. But I’m not cut out to work in an office, and I realized I wanted to be growing the food.”

While apprenticing at Camp Joy Gardens, an organic family farm run as a teaching nonprofit in Santa Cruz County, California, Eder met Santa Cruz native Thomas, who is now her life partner. Neither woman comes from an agricultural family. “My dad always found room for a veggie garden, and I wasn’t that interested as a kid, but I was exposed to fresh food and how it happens,” Eder says. “Same with Maggie—her parents had a small garden, but farming and fresh food are priorities in Santa Cruz. When she left for a while, the realization that it wasn’t like that everywhere motivated her all the more.”

Santa Cruz was a great place to apprentice, but the barrier to getting established there was “prohibitively expensive,” Eder says, due to climate challenges and water issues. When Eder’s East Coast friends Dakota and Mira Miller purchased Row by Row Farm in Hurley in 2015 and needed help getting their vegetables, flowers, berries, herbs, and poultry operation up and running, Eder jumped at the opportunity. “Maggie joined me the second year,” she says. “It was invaluable experience [working] on a larger farm. They have 25 acres in veggies and 100 in cover crops. When it felt like time to move on, we started looking for management-level opportunities on both coasts.”

An ad in the Hudson Valley Young Farmers newsletter alerted Eder and Thomas to the sale of a CSA business and some infrastructure at Great Song Farm. The previous farmers, Anthony Mecca and Sarah Hearn, were moving on after spending eight years building the CSA on the 87-acre property. (Of Great Song Farm’s 87 acres, two and a half acres produce vegetables, herbs, and flowers; 59 acres are forested; 20 are pastureland; and four are wetlands.) Eder and Thomas’s goals extend beyond simply growing organic food. Committed to sustainability and food justice, they began their first season by developing programs to cultivate community along with their crops.

Great Song Farm’s landowners, Larry and Betti Steel, made the switch from weekenders to full-time Red Hook residents in 2001, and sought a young tenant farmer. They found Mecca through the Columbia Land Conservancy; meanwhile, they hosted dinners and gatherings, rallying friends to join the CSA. With their 33-year-old son Jesse, the Steels still help with harvesting and attend CSA distributions.

Great Song Farm’s CSA members can choose from nine to 15 crops each week. There are also u-pick cherry tomatoes, beans, peas, herbs, and flowers; fruit and cheese shares are offered as add-ons; and there are membership options for low-income earners. Delivery is available for a fee, but Eder says most members prefer to pick up shares so they can socialize.

Being keen to foster community among CSA members, Eder and Thomas held beekeeping and pizza-making workshops last year (this year’s roster includes pickling and canning, too), and invited Philadelphia chef-activist Katie Briggs, who’s a James Beard Award winner, creator of Eclectik Domestic, and a friend from their Camp Joy days, to cook dinner onsite. “We worked with her on past events for her Outstanding in the Field roving restaurant series, so now that we had our farm, we had to try one,” says Eder. “We worked with her on the menu, and a lot of volunteers helped out.”

But the pleasure of an onsite dinner, which Eder calls a “beautiful, fabulous, ridiculously magic concept” in the hands of a talent like Briggs, helped Eder and Thomas reinforce their mission: fresh food, sustainable practices, good times, strong community, and useful work. “Part of sustainability, to me, is having a job that makes me glad to get up in the morning, and farming is that,” says Eder. “We’re evaluating our first season and planning for 2020, and we were pretty successful overall.” This growing season, she says, she and Thomas “hope to host more events and workshops [and] add stuff like herb salts, herb vinegars, and garden salves. First, though, we need to be solidly viable. We’re off to a strong start, and it’s been really fun to meet the members. It’s really neat to see a three-year-old eat a leaf of kale like it’s normal.”

In 2016, the Steels worked with Dutchess Land Conservancy to create a conservation easement on the property, meaning a large portion is preserved as farmland until at least 2115—part of the two-thirds of active Red Hook farmland that’s been conserved. Now Scenic Hudson is advocating for a bigger, bolder Foodshed Protection plan for the entire Hudson Valley, and food guru Michael Pollan has endorsed the organization’s critical mass approach.

Eder freely admits that she and Thomas don’t have a solid answer to the big questions of food justice. But “change needs to start somewhere,” she says, and two women feeding good food to a wide swath of local residents and creating stronger ties between them feels like “a step in the right direction.”