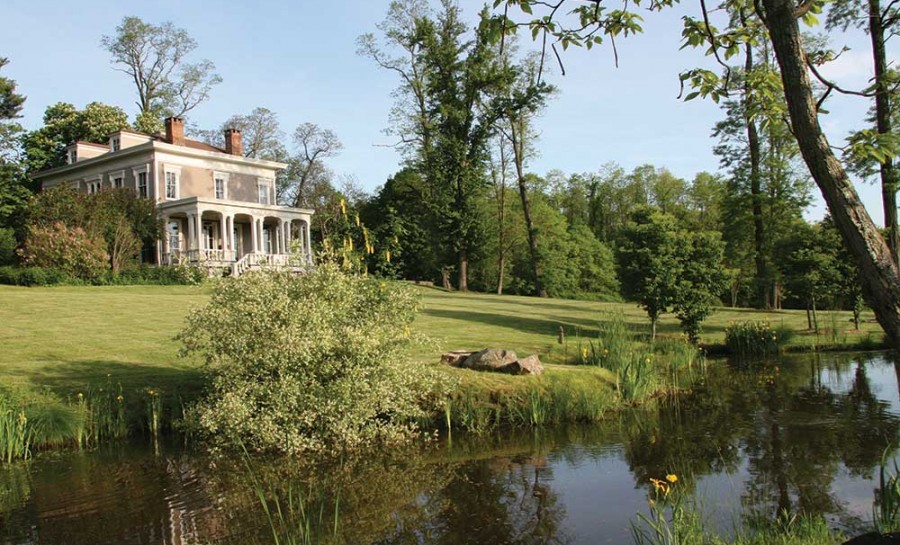 There’s a saying, “Old ways won’t open new doors,” but that’s not the case with Ham House, a beautifully restored 1850s Hudson River mansion in Tivoli. The mansion’s owners, Michiel and Monique van Dijk, are Dutch nationals with experience rehabbing historic houses in their native Holland. Although they originally found the mansion in sorry shape, its intrinsic beauty led them to take a chance on it. The couple’s heavy lift to save this grand lady was mitigated by its status as one of the great houses along the Hudson River. It is sited on seven acres, perched near the Hudson, surrounded by Tivoli Bays State Park (once part of the property), and within walking distance of the village of Tivoli and Bard College. 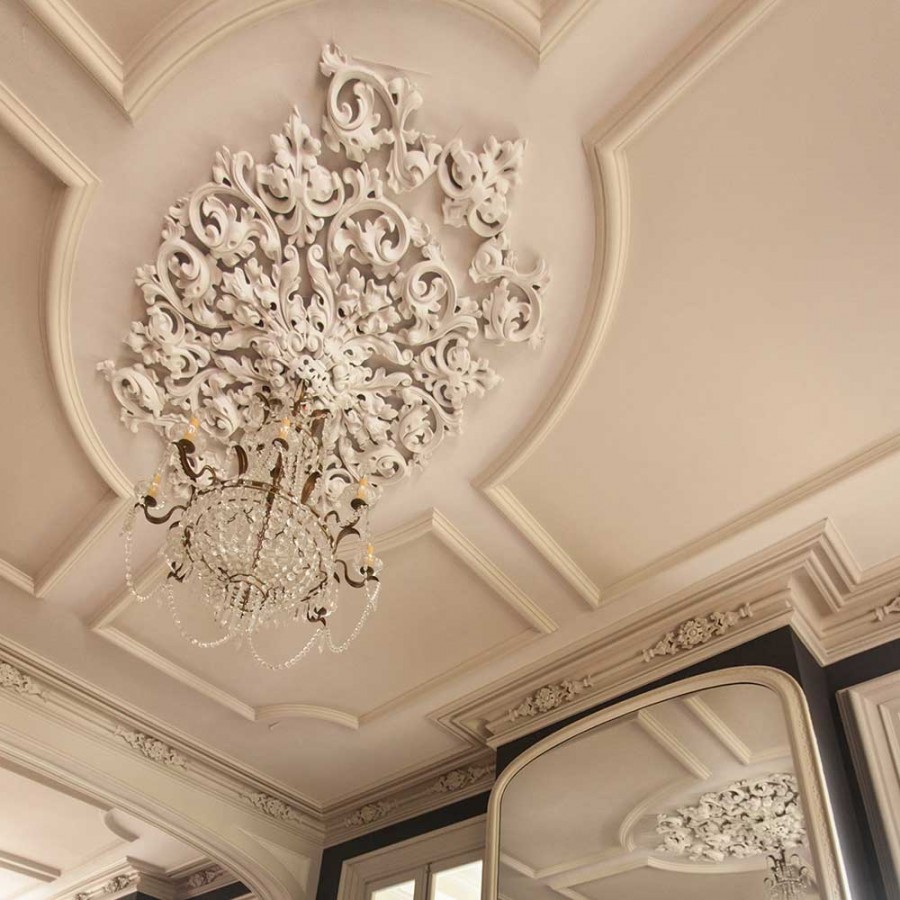 The van Dijks have filled Ham House with many materials that were sourced in Europe but look right at home. For example, the hand-molded tiles in the kitchen look as old and grand as the house itself. Throughout the house, wood plank floors shine with a rich patina. The custom-made French doors are fitted with glass inserts by Bendheim in New York City that mimic handblown glass.

As an Italianate-style Victorian, Ham House features floor-to-ceiling windows, center hallways, and ornate detailing. No easy fixer-upper, the mansion required renovating on a scale that would scare off many buyers.

Michiel, the founder of RESTYLE, a Tivoli real estate firm (also featured in this magazine) is a successful model who relocated from Holland to New York City in 1988 with his wife Monique, a design and décor entrepreneur who owns the Rhinebeck clothing boutique No Sugar. While living in New York, the van Dijks frequently headed to Saugerties to visit friends and escape their East Village apartment. The historic Dutch Colonial stone houses upstate reminded them of Holland, and they decided to move to the Hudson Valley. 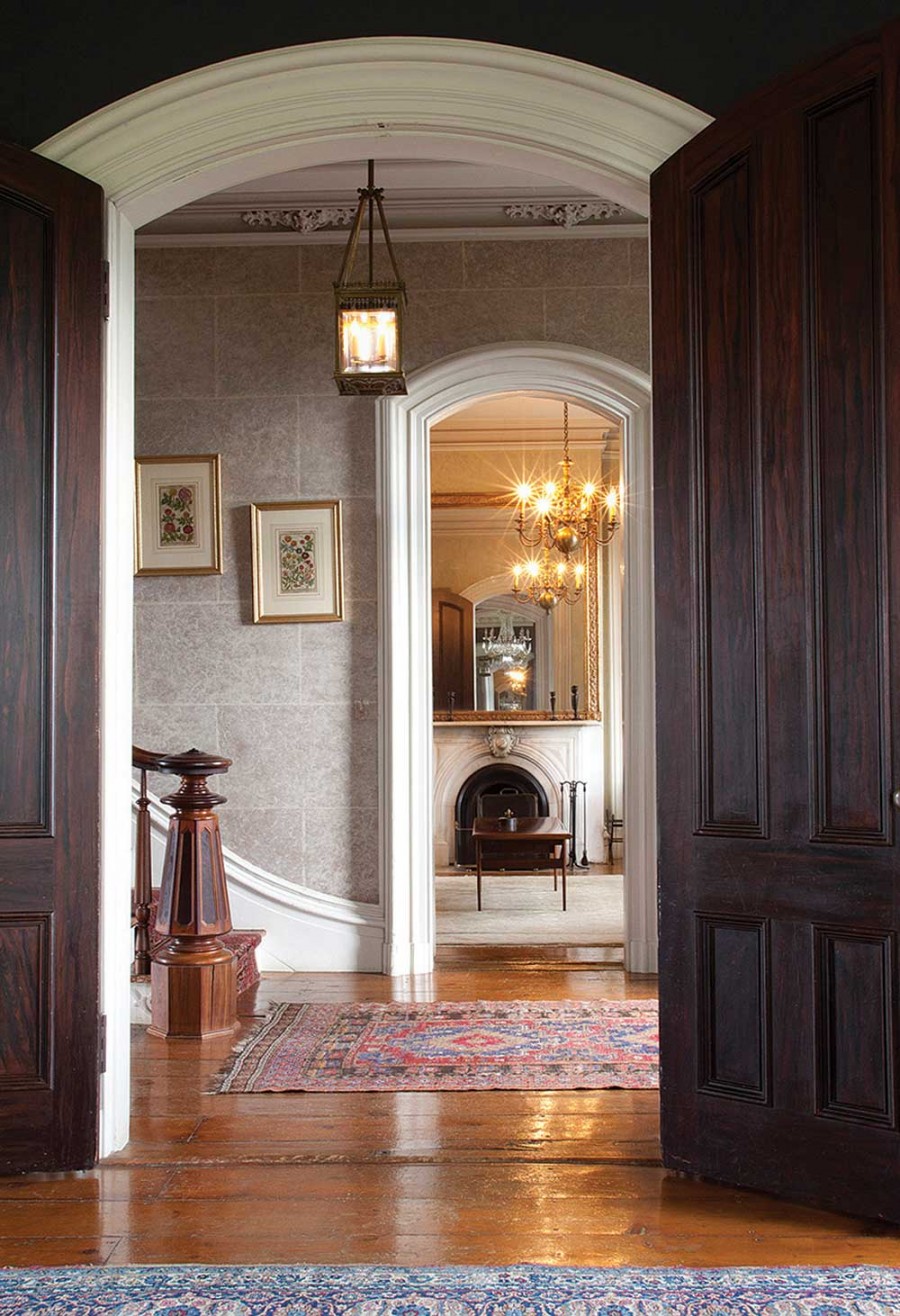 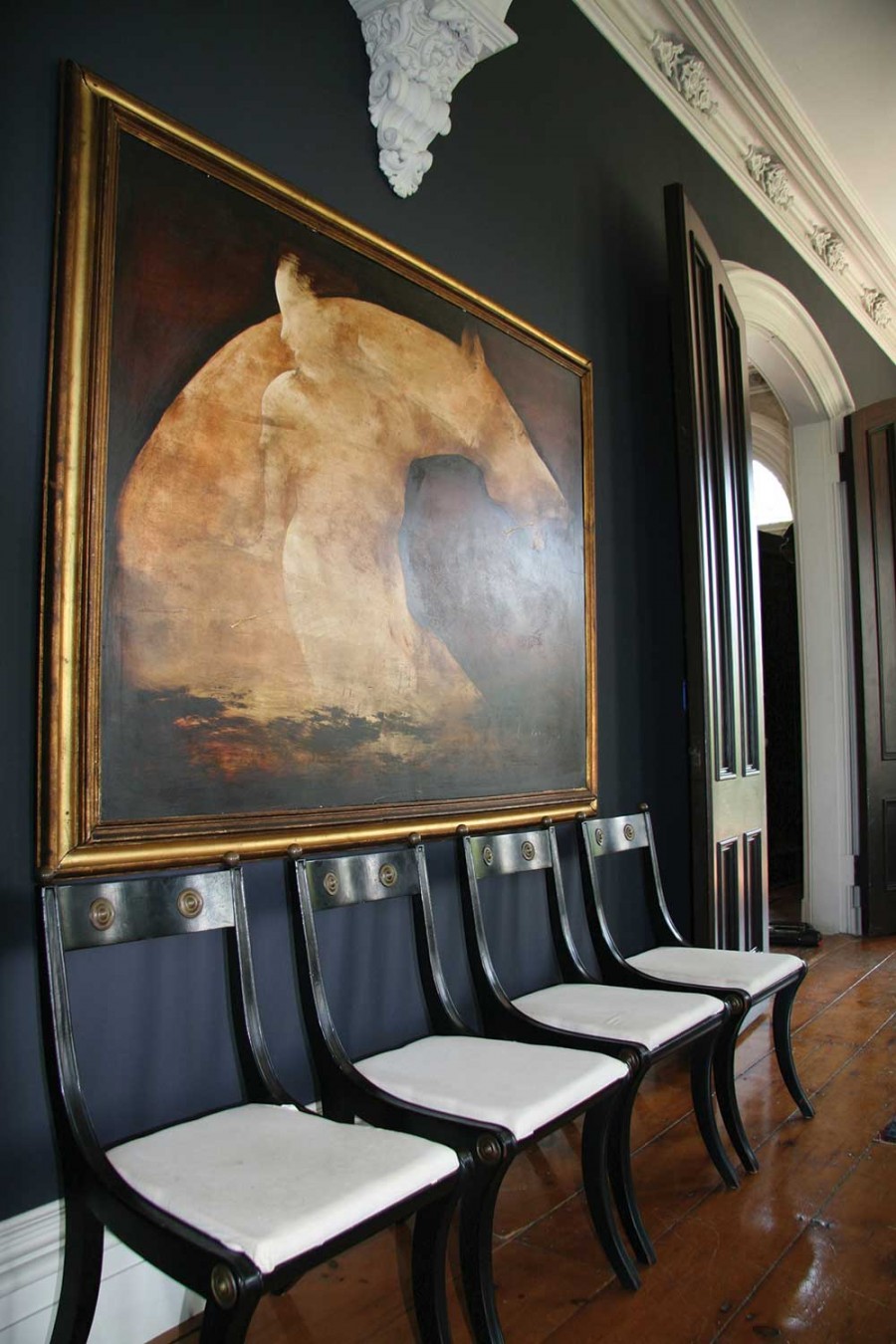 In 1996, the couple began hunting for a property to rehab, and their search led them to Ham House. “The 1850s Italianate style was near and dear to our hearts,” Michiel says. “We could see Ham House had lovely bones, and we were excited about the possibilities.”

Built in 1854 by gentleman farmer William Ham, the mansion was a children’s camp by the 1920s. Eventually, it became part of Bard College, and was used as student housing, faculty apartments, and a conference center, with precious few resources devoted to its upkeep. When the van Dijks bought the house, it was split up into seven apartments.

In 1958, Nobel Prize-winning American writer Saul Bellow bought Ham House for $8,000 and lived there with his family while teaching at Bard. Although he wrote Henderson the Rain King and Herzog there, he found Ham House to be a headache rather than a muse, and called it “this ramshackle old building” in letters to friends. In 1964, he donated the house back to Bard, and once again it languished.

When the van Dijks bought Ham House, its plasterwork had deteriorated, there were garden hoses running through the rooms, and it was suffering structurally.

“When we looked at the house,” Michiel says, “we could see the exterior walls actually bowed outward.” The walls bowed due to the slumping of the four massive chimneys, each with three flues, serving a total of 12 fireplaces. It took two years to rehab the structure, starting with the roof. Once Ham House was structurally sound, the van Dijks moved in. They built a porch on its Hudson River side, added a driveway and parking area, built stone walls and terraces, and installed a parterre herb garden, gunite pool, and clay tennis court. Today, the landscaping has a Dutch-style charm that’s perhaps most evident in the knot willows in front of the mansion.

The interior restoration took 10 years and included breaking up the rabbit warren of small rooms, moving the kitchen from the basement to the first floor, turning the receiving room into a casual lounge, and restoring the mansion’s plasterwork, elaborate moldings, and curved staircases.

Today, the length of the house facing the Hudson is one room that seats 65 people, with abundant light flowing through its tall windows. Upstairs is a master suite and four bedrooms, accommodating 12 people, a library displaying Bellow first editions, and two bathrooms with freestanding antique tubs repurposed from Mohonk Mountain House in New Paltz.

Most of the furnishings are large-scale European antiques imported to suit Ham House’s 14-foot ceilings and generous rooms. Neoclassical and modern furniture mixes with traditional Dutch pieces. In the main room, a marble fireplace vies with a painting by Brazilian artist Carlos Araujo as the focal point.

In 2013, the van Dijks began offering the mansion to host events. They moved into a whimsical bracket-style cottage on the property, where they still live with their 11-year-old daughter.

Although Ham House has endured in many guises, it’s come into its own as an authentically restored antique that functions well in the modern world. “Many people have had the opportunity to enjoy the home,” Michiel says, including Bellow’s three sons, who visited last summer. “We’re happy others get to share the results of all the work we’ve done to the house.”