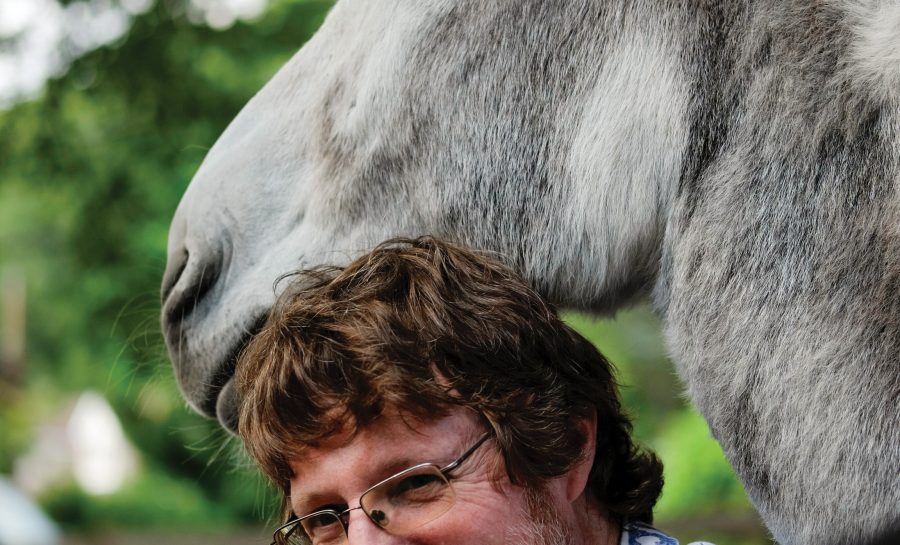 Steve Stiert found himself at a transition point back in 2010, amicably parting with both his wife and his career at IBM. “I refuse to call it a midlife crisis, because I have no regrets,” he says. “But my fundamental nature was different from how I’d been living my life. If you had told me seven years ago that I’d own 13 donkeys, I would’ve said, ‘What are you smoking? Why donkeys?’”

What happened was that Stiert’s daughter was doing pre-veterinary studies and joined a donkey club. “We watched funny donkey videos,” he says, “and I kept coming across information that just connected with me.”

After learning that, unlike horses, donkeys don’t require a large pasture for roaming and galloping, Stiert realized that he could easily keep some critters happy on his four-acre property in Ulster Park.

“I don’t think my daughter believed [I was serious] until I started picking her brain for stable ideas,” he says. “I have a one-acre paddock and a shelter with four walls and stalls that mostly stay open, and [the donkeys] do fine. They’re a desert animal; rich pasture makes them overweight.” 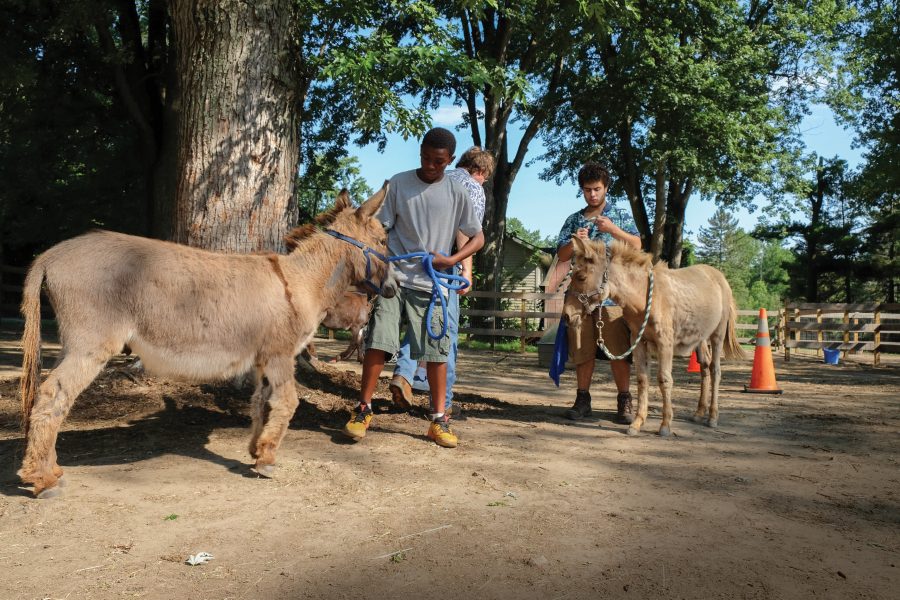 Teenage boys from the Children’s Home of Kingston regularly visit the Hudson Valley Donkey Park, learning from Stiert how to work with the animals.

Stiert now shares his life with a cast of 13 characters that includes Stripes, a zonkey (zebra-donkey mix), and Susie, a retired sheep-guarding mini-donkey. He relishes all their quirks. “Susie can back off Stripes and he gives up; she’s a piece of work,” he says. “Blaine will try to climb into your lap even though she’s 250 pounds. When she weighed 150, I used to cradle her in my arms.”

And what began as a hobby has evolved into Hudson Valley Donkey Park, a nonprofit that Stiert operates with a threefold mission. First and foremost are animal therapy activities involving the donkeys, which he regularly takes to visit the Children’s Home of Kingston and residences for seniors and disabled folks.

“If I’m ever torn between events, people in institutional settings come first,” he says. But Stiert has expanded the organization’s therapy initiative since discovering that all sorts of people seem to glow after getting some donkey love. “I know it’s not some panacea, and that’s how I settled on the name ‘Little Brays of Sunshine,’” he says. “People leading normal lives can use contact with donkeys to work their own therapy.”

Hudson Valley Donkey Park’s second priority is its ambassadorial and educational role. Stiert takes his donkeys on outings to libraries, schools, and nature centers, and teaches Donkey 101 classes at SUNY Ulster and Cornell Cooperative Extension. Last come a Meetup group and public hikes with the donkeys—everything from easy rail-trail strolls to rock scrambles. 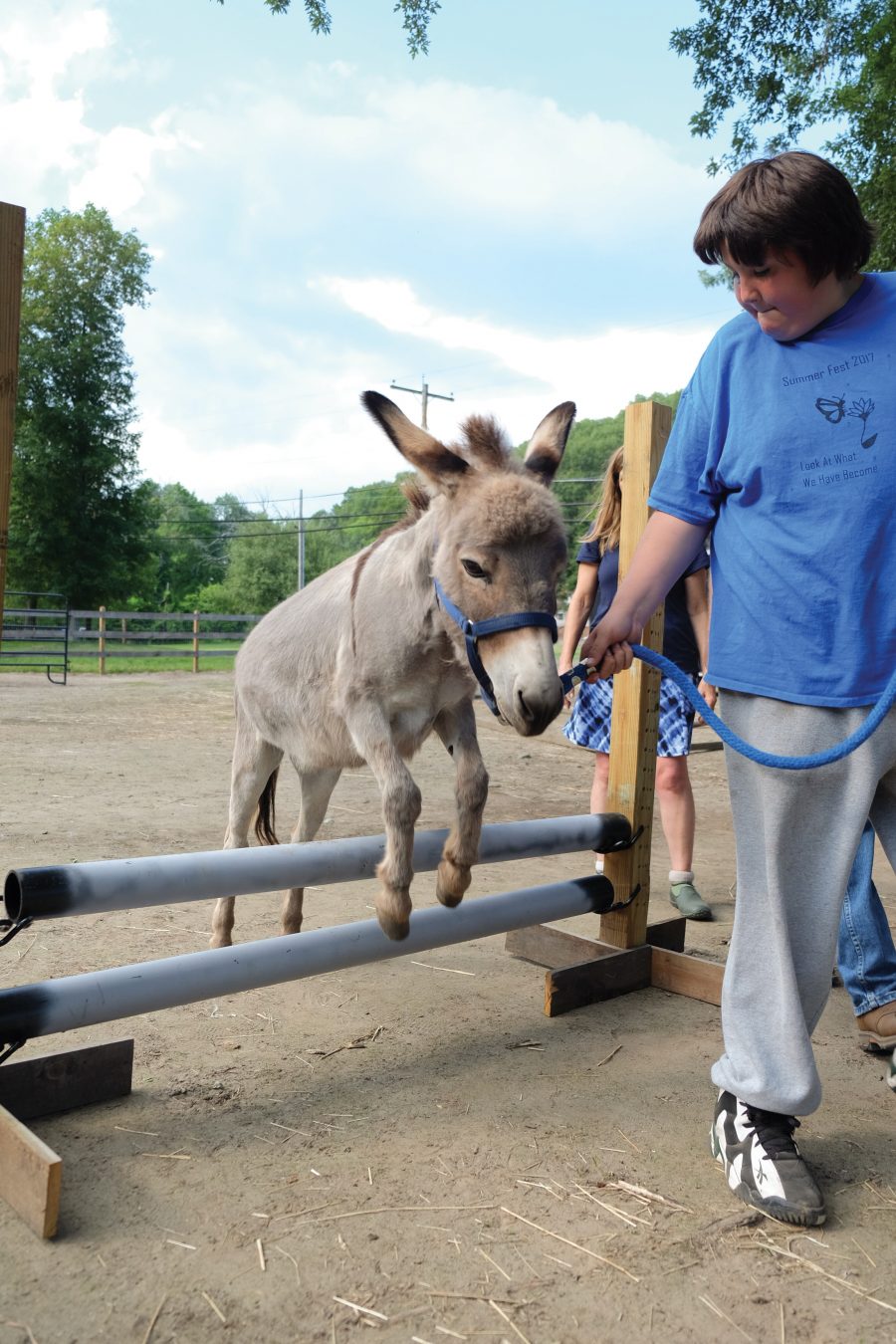 Teenagers guide the donkeys in jumping.

But you’ll never find these donkeys working for cash. “I don’t ever want people arguing that we should go to this or that because it pays more, so we don’t do weddings, petting zoos, birthday parties, or nativity scenes,” Stiert says. However, he adds, he and his donkeys “did participate in the funeral of a donkey lover, which was an honor.”

For Stiert, Hudson Valley Donkey Park is not exactly a goodwill project or a farm, even if it does keep a herd of hoofed creatures. He considers the park to be a shared home. “It’s always been my philosophy that when we domesticate animals, they have been stripped of their normal mental and physical stimulation, and it’s our job to try to make up for that,” he says. “So I set out to try to find something for us to to do, and the things we have found to do have been beneficial.” 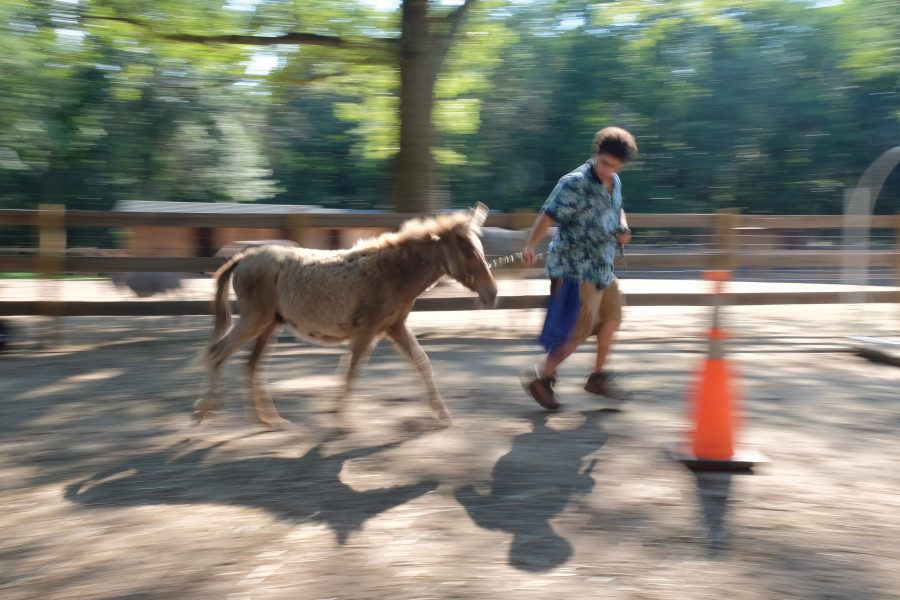 A visitor takes a donkey through an agility course.

And to say the donkeys are enjoying life would be an understatement. “The best thing is that donkeys don’t seem to attract anything but nice people,” Stiert says. “They span the political, religious, and every other spectrum, but there’s just a shared decency. I feel blessed to own these guys and try to be very generous about sharing them. And the more I get to know them, the more I like to think I am probably a donkey in human form.”

Donkeys, Stiert notes, are the equine world’s hardest workers: they carry loads and people and guard livestock (unlike a horse, a donkey’s instinct is to fight rather than flee). Around 95 percent of the world’s donkeys are still used as beasts of burden, mostly in developing countries. The denizens of Hudson Valley Donkey Park, however, do brain work, and Stiert finds them enormously apt. “Donkeys have an awareness of the big picture that goes beyond their immediate interests, and very vibrant individual personalities,” he says. “They want to build relationships—it’s their nature to like people. And they rehab really well—you can take in a rescue and end up with a really nice donkey.” 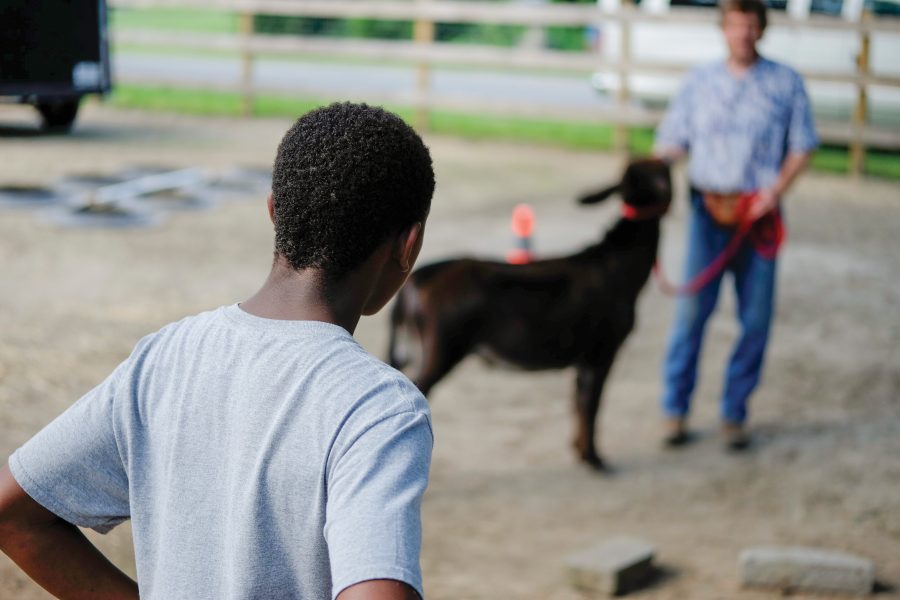 Stiert guides his students; in the paddock.

Indeed, Stiert seems to feel honored by and grateful for every aspect of his association with the herd. Donkeys, he notes, are more like cats than dogs than you would think, and just as individual. “They have their own take on things,” he says. “The donkeys offer a nonjudgmental source of affection; there’s no need to keep up pretenses. Kids who feel like they’ve gotta be tough and tease each other, kids with those ingrained defense mechanisms—when we visit with donkeys, we try to provide an environment where they can let go of all that and be themselves. It’s rooted in insecurity, and donkeys give a lot of positive feedback to calmness and confidence. You see these little changes in the kids [who work with them], and hope it builds over time.”

Currently, Stiert is looking for a new home for the donkey park, a larger property where he could build a central barn and an indoor arena where guests and donkeys can enjoy one another’s company, even in bad weather. But he wants to keep it intimate, like his current place. “I can look out my bedroom picture window and have a nice view of the front paddock about 30 feet away,” he says. “From my back windows, I can see the back paddocks and front of all the stalls. I designed them to face the house. I’m hoping not to lose that, or to create that in a new property, as it’s so nice to have them that close.” 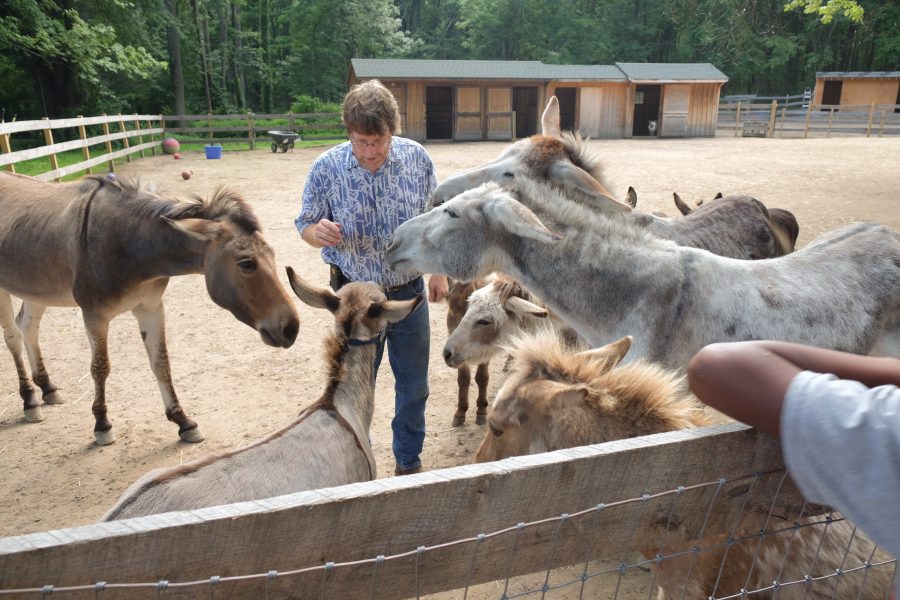 Stiert gathers the donkeys around him for some conversation.

Animal obsessed? Read our profile on Windham farm for retired circus animals, from the Summer 2017 issue of Upstate House.