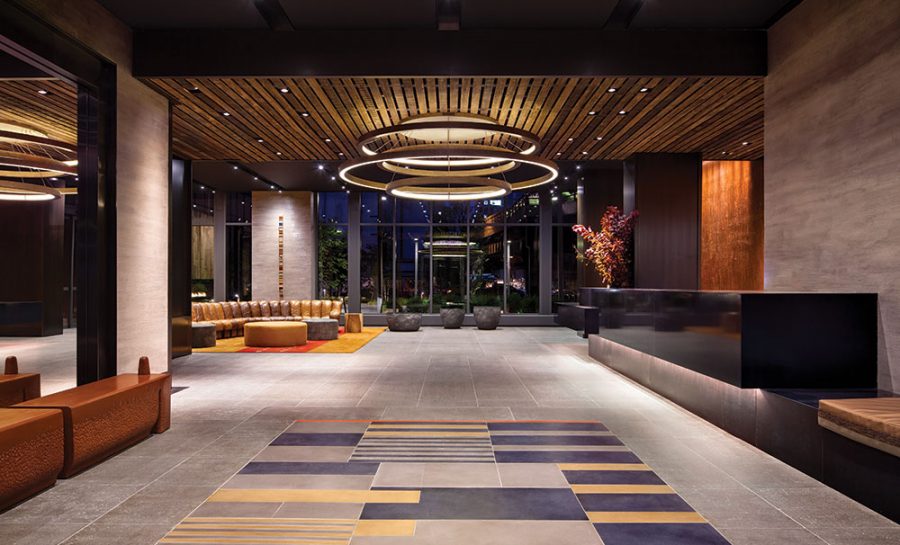 When it comes to designing spaces that enhance daily life, says the New York City-based interior designer Clodagh, the founder of her eponymous design firm, “There is no such thing as an inanimate object. Everything carries energy, good or bad.” To Clodagh, a world traveler who grew up in rural Ireland “in the depths of the country, surrounded by color and light and people who were healers and storytellers,” such a concept is innate, and her design is informed by energetic exchange. “We’re all flow-through systems,” she says, “letting things flow into us. I’ve always studied people’s body language as they move through different environments.”

In Clodagh’s world, every aspect of design should nurture our souls and senses. Her goal is the creation of a healing environment, whether it’s the 12-room boutique-style Beacon Hotel and Restaurant on Main Street in Beacon, terrace furniture for the Museum of Modern Art, a resort in Portugal’s Douro Valley, a private residence in Miami, or an apartment building set to house 1,800-plus people in Queens. “We’re animating the stairs so people will use them; we have a graffiti artist weaving quotes into the staircase,” she says of the latter, which she’s currently working on. “The lobby’s partially finished; I was so happy to see people sitting and reading peacefully by the fireplace, even with the clamor of construction eddying around them. We put in a [kinetic, audio-accompanied] flowing rainwater picture to cut the noise.” 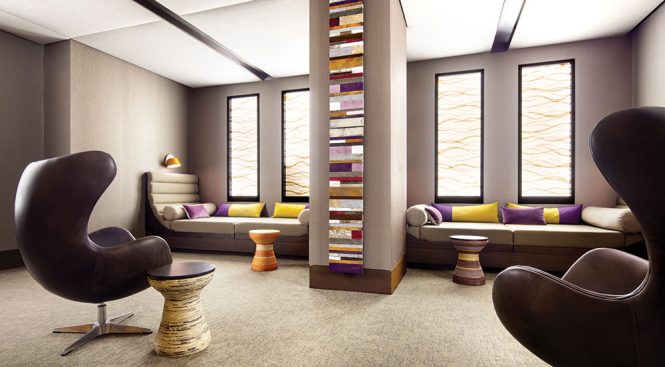 Above: In a New York City apartment building that includes a large fitness room, more than 100 resident dogs, and two party rooms, a quiet room is very welcome. This acoustically balanced room offers space for residents to indulge in silent retreat, whether through meditation or simply reading a book. Swiveling wingback chairs and a divider provide more privacy. Photo: Steve Freihon

“There is no such thing as an inanimate object. Everything carries energy, good or bad.” —Clodagh

Now a world-renowned designer—having been named to Hospitality Design magazine’s Platinum Circle, Interior Design magazine’s Hall of Fame, and Architectural Digest’s Top 100—Clodagh spent years working in the fashion industry before broadening her embrace of design to include creating built environments based on her philosophy of “life-enhancing minimalism.” In New York City, her adopted home for the past 35 years, she’s created dramatic and soothing spaces all over town, from the West Village to Park Avenue to the outer boroughs. While the majority of her projects are still in New York, she is also busy designing spaces far afield in Turkey, St. Kitts, Portugal, Miami, and San Francisco—along with a retreat for herself and her husband on the Hudson River waterfront in Beacon.

So what is it about this down-to-earth, fearless, roving Irishwoman’s work that captivates not just the eye but also the mind and spirit? Perhaps it’s her holistic grasp of design as something felt as much as seen. In her new book, Clodagh: Life-Enhancing Design, published by G Arts,  Clodagh lists the “Four Cs” of her design process, which she uses for every space, regardless of its size or significance: contemplate, cleanse, clarify, and create. Throughout the design process, her work is informed by healing modalities both ancient and modern, incorporating Feng Shui (the Chinese art of positioning objects for smooth, strong energy flow), wabi-sabi (the Japanese philosophy of celebrating imperfection and transience), biogeometry (the pure pattern information of natural systems), biophilia (the life-enhancing love of natural elements), and chromotherapy (the use of color to enhance healthy and harmonious frequencies in the human body). These modalities are ones to which she’s been drawn intuitively, in some cases before she even knew they existed. “I was asked to lecture about biophilia and I asked, ‘What’s that?’ and they said, ‘You should know—you’re doing it,’” she laughs. “Same thing happened with Feng Shui.” 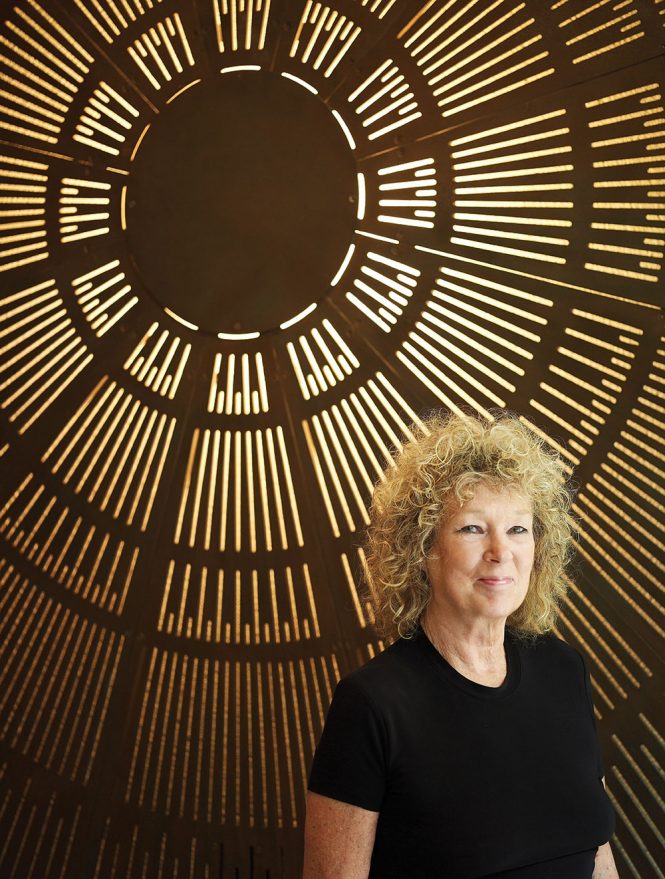 She describes one recently completed project, Six Senses Kaplankaya, a five-star hotel in Akbük, Turkey, as involving a “rocky, craggy moon garden with flowers that release their fragrance as the moon rises and look like holograms at night.” Light, sound, form, and color are all being employed in the hotel’s design in service of the vision that arose for it during the contemplating, cleansing, clarifying, and creating process.

Perhaps surprisingly, language is often a starting point for Clodagh’s design, even before sketching begins. “We use words a lot,” she says. “We write before we draw. Humans aren’t static, and our environments should celebrate and honor that reality.” At Sasanqua Spa in Kiawah Island, South Carolina, for instance, a slotted screen converts what might have been uncomfortable glare into a “changing runner of light and shade.”

Raised in Ireland’s County Mayo by “downwardly mobile” parents who bred hunting dogs, Clodagh’s first house was one originally owned by Oscar Wilde. Successively smaller houses and increasingly oppressive boarding schools followed; thanks to all the moving, she came by her minimalism early, developing a loathing for clutter and confinement. “You don’t see a U-Haul following a hearse,” she observes drily. “The fewer possessions the better.”

Opening her own couture house in Dublin when she was just 17, Clodagh made considerable waves on the Irish fashion scene before picking up and moving to the Mediterranean coast of Spain, where she and her husband, the photographer and artist Daniel Aubry, purchased a townhouse on an 18th-century square in Almeria, a coastal city in the province of Andalusia. “I fought with the architects and somehow I won,” she writes of that first renovation, which was undertaken on what had been “a rabbit warren of cubicles and bad partitions.” The experience of remaking her own home was a revelation, one that led her to open a design studio; she got her first job the day after hanging out her shingle, and Clodagh Design was launched. A few years of roving later, in 1983, she settled in her beloved New York City, which she describes as being a “necklace of villages.” 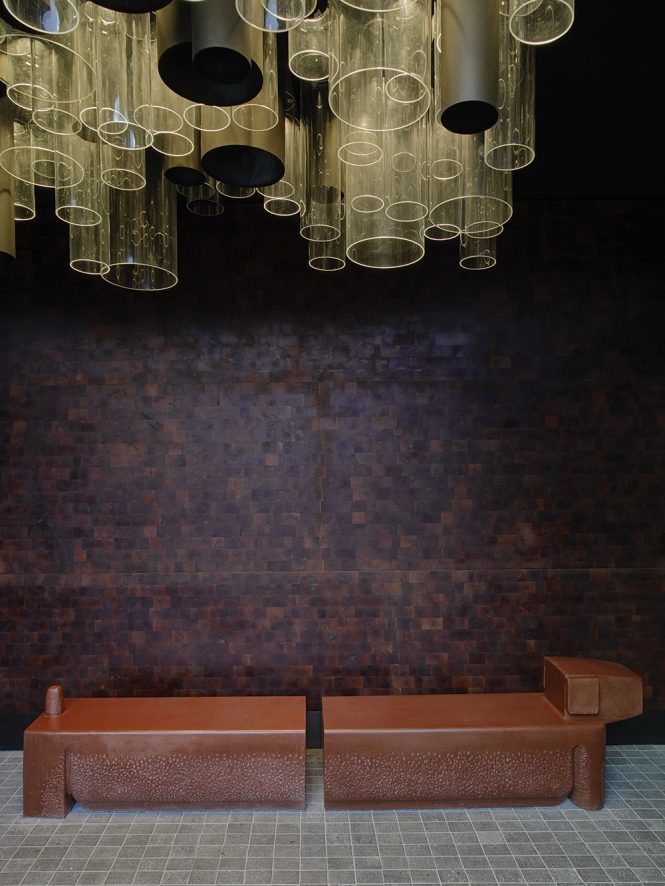 For the lobby of Abington House, a large rental apartment building in New York City, artist Terence Main created the 17-foot-long Urban Dog bench, cast in terracotta concrete, to greet new arrivals. Above the bench hangs a light installation, made of clusters of acrylic tubes, designed by Clodagh to create a pause “so the energy doesn’t stream straight through the door.” Photo: Eric Laignel

Although Clodagh is currently one of the planet’s most sought-after designers, she nevertheless hasn’t a snobbish bone in her body. She and Aubry discovered the joys of Beacon well over a dozen years ago; fond memories include meeting Pete Seeger at the farmers’ market there and sharing hugs with him whenever they’d bump into each other. Now the couple is building a home for themselves to retire to someday on the banks of the Hudson River just outside Beacon. “I love the sound of water,” she says. “And when I grow ancient and decrepit I’ll be able to walk to a bookstore, an art gallery, and a decent bar.” She’s taken up art photography herself, and will be showing photos in late 2018 at Cheryl Hazaan Gallery in Tribeca.

In Life-Enhancing Design, Clodagh has written an enlightening explanation of her process, illustrated with lush photography that inspires, and capped with a chapter on her firm’s charitable activities, “Philanthropimania,” since she considers philanthropy to be yet another aspect of her life as a vessel through which positivity and delight flow freely. “I don’t allow myself to be stopped,” she says. “It’s all forward motion.” 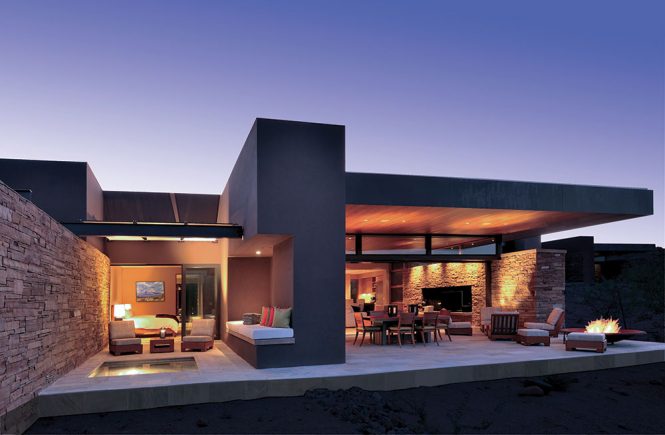 The units at Miraval Arizona Resort & Spa in Tucson are designed to mirror the desert’s rugged landscape. Here, an outdoor bed and plush chaise lounge allow for relaxing next to the hot tub or even sleeping under the stars. Photo by Robert Reck.