“I wanted to create a sense of arrival,” says architect Constantin Kalesis of his design for the Courtyard House in Bearsville. “I wanted there to be a progression as you perceive the house. The first thing you see is the porte-cochere as a gate house, then you enter into the courtyard. It’s a process of discovery.” Sited on 19 acres, the Courtyard House is part of an architectural grammar the Queens-based architect began with an earlier project, Zena Highwoods.

Since building the Zena Highwoods house in 2020, Kalesis has been fascinated by the possibilities of designing homes not as a one building but as a series of structures. “The classic house is one large building with a symmetrical exterior. You draw that and carve up the interior,” he says. By separating the home into separate structures in this way, especially when there’s room to spread out instead of having one building, wings of a home can be skewed toward site features like a rock outcropping, a copse of trees, or a mountain view. “It allows you to break the box and start moving the pieces around the site in a way you wouldn’t think of in a classic building,” he says. 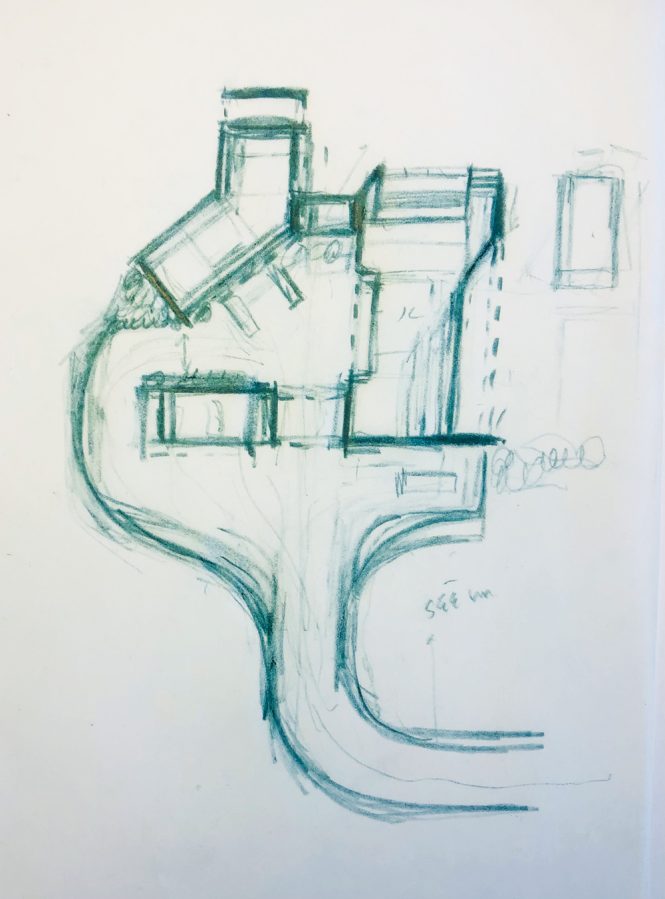 By separating the building into a series of connected boxes, Kalesis Design Studio was able to achieve a degree of freedom in the design of Courtyard House that would be impossible with a single-box structure.

For this design, the living room is a separate structure from the bedroom wing. “Breaking the box in this way means that the bedroom can be at a quiet part of the property and the living are can be in a separate building, directed toward a specific view,” says Kalesis. Connecting the two wings is an all-glass library at angles between the living spaces and entertaining spaces. The room is big enough that it wasn’t just a walk-through space but one that existed on its own terms and enticed visitors to linger.

The kitchen features large glass doors that face the pool on the south side of the house, making the most of the sunlight from the southern exposure. Kalesis loves designing homes for the expansive home sites of the Hudson Valley. “I’ve started to take into account the movement of the sun in my designs,” he says.