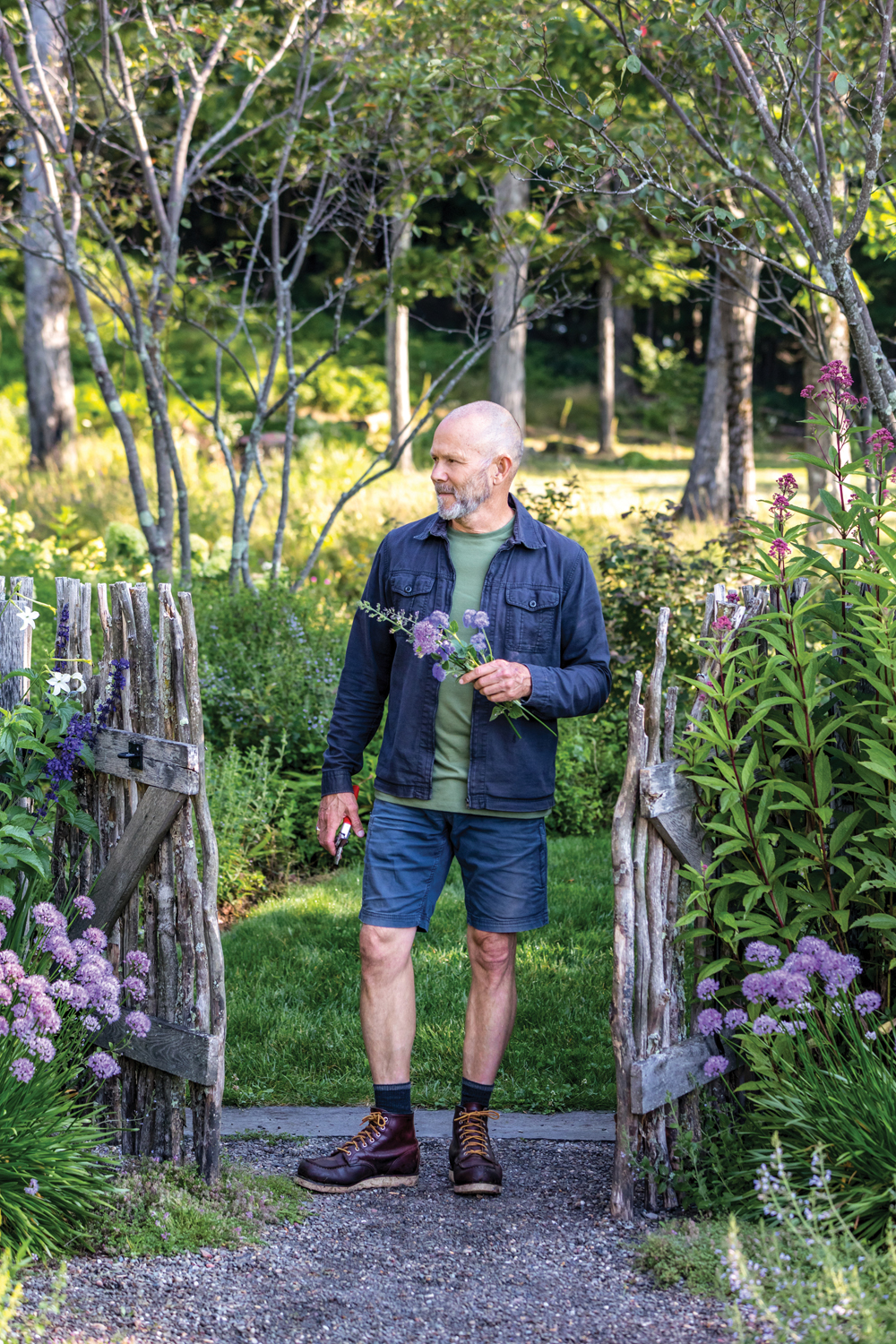 Dean Riddle is reveling in the last of the summer phlox. The five-foot-tall semi-wild plants, bursting with ample pink blossoms, cover the Catskills through the second half of summer, graciously offering their nectar to butterflies and their beauty to anyone who will pause long enough to notice.

This year, Riddle observes, has been a great year for the plant. “It’s been the best summer phlox to come along in forever,” he says. “Its spicy fragrance is intoxicating and its blue-pink color is stunning, particularly at dawn or dusk—it’s been heart-stopping.” 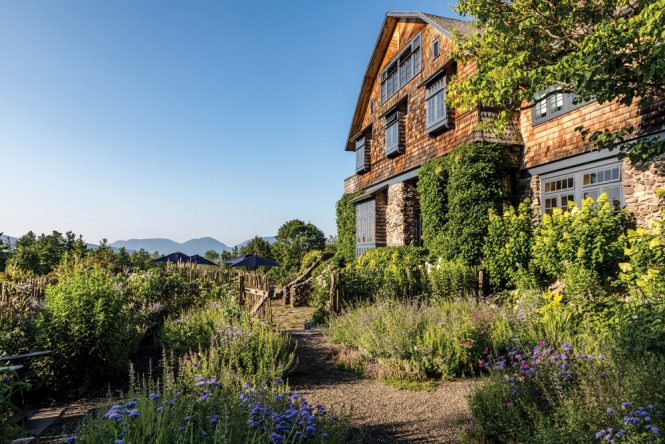 The 1906 home sits high on a mountainous slope in Greene County. The large, east-facing raised beds are easily accessed from the home’s kitchen.

For Riddle, a master gardener who has been creating and tending landscapes in the Catskills for three decades, this heightened awareness for natural detail is more than an occupational hazard—it’s an outgrowth of his living artistry. Born in the Blue Ridge Mountains, Riddle was raised in South Carolina, where he took to cultivating his parents’ flowerbeds at a young age. After working at a plant nursery in high school, he went on to study horticulture in North Carolina and then completed a year-long internship at Hillier Nurseries in the UK. 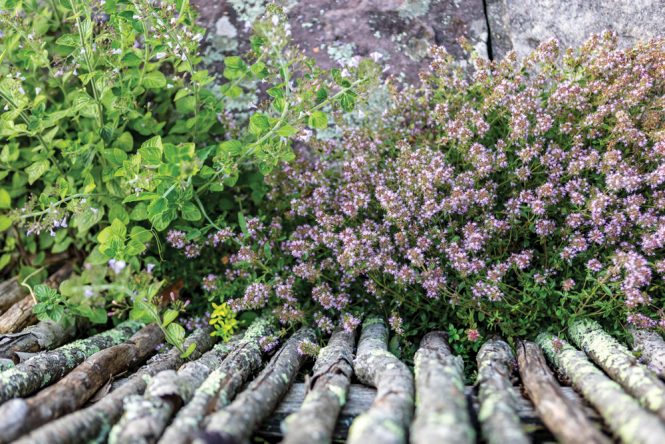 The rustic picket fence was made with black locust wood. The fence also does double duty as a trellis for flowering vines.

He made his way to the Catskills in the late `80s and developed an almost instant affinity for the mountainous region so similar to his birthplace. “Its rocky and hardscrabble but also lush and beautiful,” Riddle explains. “Rather like life itself.” He soon moved to the area full-time and began tending local gardens professionally. “Once I settled here and put down roots, and began a garden of my own, the place really found me,” Riddle says. “I like to say, ‘Home is where the garden is.’” 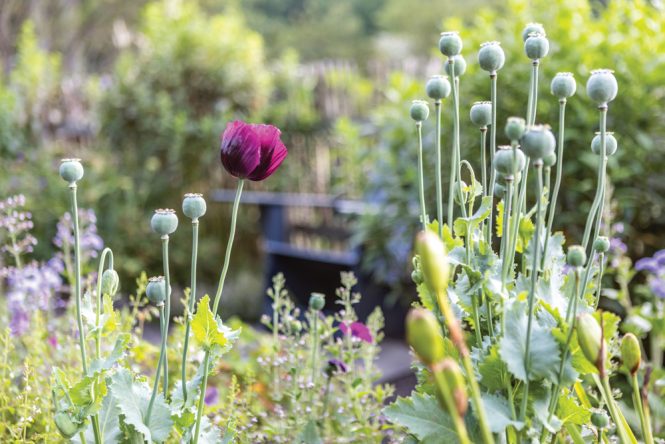 Purple poppies burst from the flower mix in the English-style garden.

Riddle’s current infatuation with phlox notwithstanding, he doesn’t really have favorite plants. “Context is everything,” he explains. “It all depends on what the situation, the garden—be it meadow, a woodland, or even a flower pot—calls for.” Rather, it’s the act of creating and tending to the natural world that serves as his muse. “The tactile and deeply emotional and spiritual connection to nature and flora and all the physical world—sound, scent, light, movement, the cycle of the seasons—is gained through my personal creativity,” he explains. 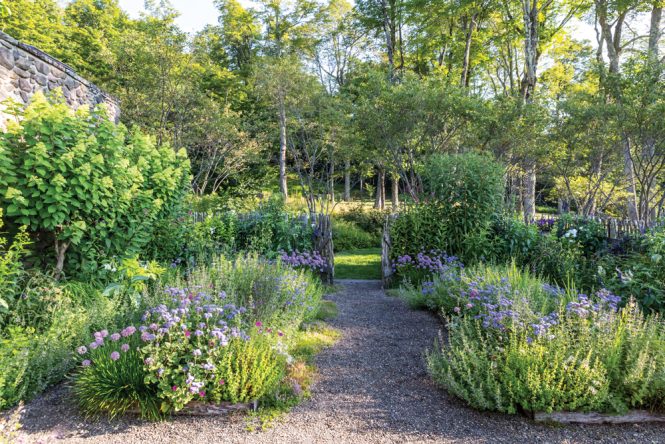 Riddle divided the garden with wide gravel pathways for easy access and plenty of space for strolling among the plants.

Case in point: this 12-acre garden property nestled on the high slopes of Greene County. The owner first approached Riddle 10 years ago, wanting a planted screen to separate the property’s long entrance from the main lawn, as well as a planned garden for the eastern side of the 1906 home. For the entrance drive, Riddle planted 30 Amelanchier trees, locally known as serviceberry, mixed with a few native redbud trees. Ten years on, the native trees now form a canopy above the entrance way, with a shrub layer of Clethras, or summer-sweet, hydrangeas, and Fothergillas beneath.

At the eastern edge of the house, Riddle planted a full-sun garden on two levels. The upper raised bed garden is enclosed with a picket fence crafted from vertically arranged saplings collected from the nearby woods. “The raised beds have a semi-formal layout filled to overflowing with a loose, very informal mix of herbaceous plants in mauve, purple, blue, and white,” Riddle explains. “All of it peaks in the high summer.” 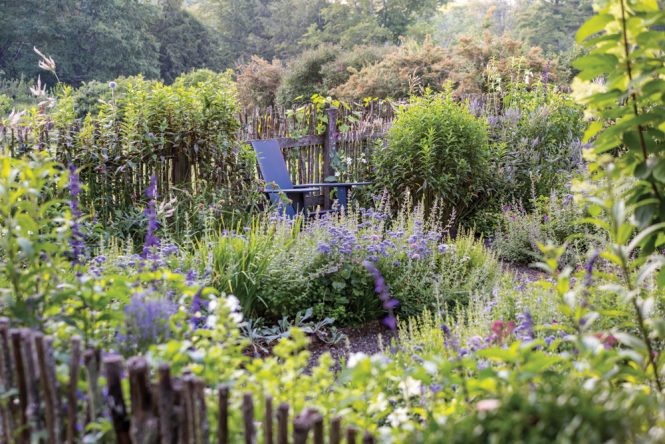 A modern take on an Adirondack chair is partially hidden in a corner of the garden.

Three steps down, the second garden “is a sprawling bluestone terrace laced through with creeping thyme,” says Riddle. “It’s the perfect place for dining and entertaining or just taking in the splendid mountain views.” When pondering the passage of time and the growth of his creation, Riddle draws from the words of the philosopher-gardener Fernando Caruncho. “He calls gardens caja de luz, or boxes of light,” says Riddle. “For me, that says everything.” 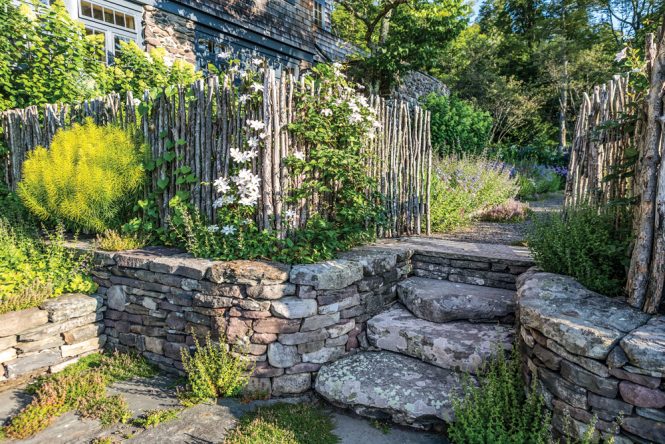 Riddle planted creeping thyme between the pavers and steps of the lower garden. The thyme complements the weathered bluestone and smells heavenly when crushed underfoot.