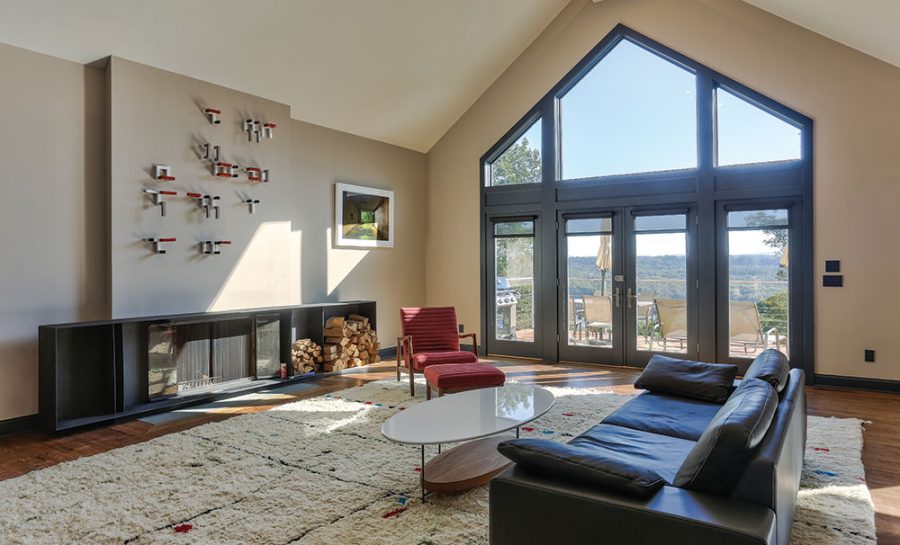 The beauty and serenity of a view from an elevation is like a mood pill,” says writer Eli Gottlieb. Together with his wife, who directs a New York City strategic communications firm, Gottlieb bought the 2005 contemporary in Highland in 2016. When the couple first saw the house, they thought it was a bit meh, but they loved the site. “It was structurally solid but kind of generic,” he says. “The genius was in the siting. An elevation and a river view—it’s the best of all possible worlds.” In the summertime, he adds, “It’s a trompe l’oeil wilderness in a perfect bowl of green and you can’t see another person. Yet we’re actually close to Route 9 and our neighbors.”

For the renovation, Gottlieb and his wife were both new and repeat clients of architect Richard Librizzi, founder of Domus Studios in New Paltz. The couple had been renting getaways near Mohonk Preserve for two years when they stayed in one renovated by Librizzi. It had what Gottlieb calls a “relaxed rigor, meaning a clean and creative usage of the divisions between spaces,” which was exactly what they needed for their own place. “We wanted to give it a little more personality while retaining its open, airy, spa-like feeling.” 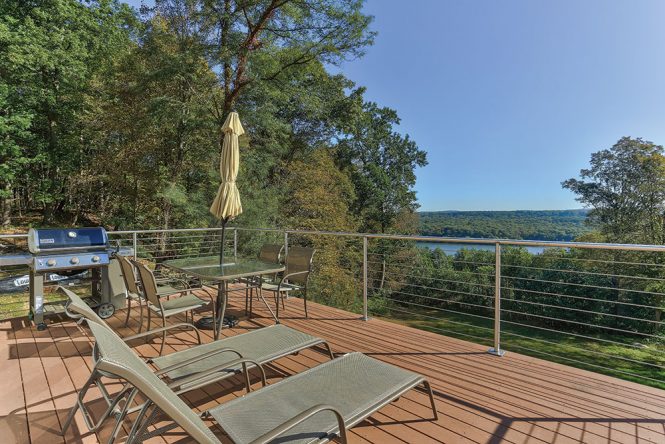 The first room to get a major overhaul was the kitchen, which opens up to the dining room (which is adjacent to the wide-open living room). “My wife is a serious cook who has embraced her inner bread baker, pickler, canner, and yogurt maker,” Gottlieb says, “and the kitchen was from the start going to be one of the focal points of the renovation.” They kept the original Wolf range and Subzero fridge, but everything else had to go. “Now, it’s a cook’s kitchen for New Yorkers who are cramped on space to be able to expand and cook dishes they want without worrying about counter space,” he says. “Every decision was made for beautiful efficiency.” The soothing green on the walls reflects the surrounding forest. The custom cabinetry and island are topped with Brazilian soapstone countertops. A cornice was installed to serve as an architectural frame articulating the division between the rooms, which “made the space feel open but very distinct,” Librizzi says.

“My wife and I are into understatement,” Gottlieb says, but the living room’s traditional fireplace didn’t measure up to the glass wall and its stunning river view. So Librizzi designed a much larger fireplace surround—800 pounds of black-painted steel, stretching 13 feet across the room. “This created a focal element that was much more in scale with the rather large and open cathedral ceiling,” Librizzi says.

Gottlieb calls the house’s aesthetic “Italian modernist.” This shows in the contemporary ceramic Roberto Caracciolo installation above the fireplace. That and the patterned Berber carpet accent the structural changes without distracting from the view. To replace the original “pretty underwhelming” lights, Librizzi says, a box was constructed across the ceiling to hold recessed lighting.

The first-floor walls were removed to create an open living/dining/kitchen space;

The front entry, which opens into the living room, had its own little “awkward” cathedral ceiling, Librizzi says, so he installed a 9 ft. ceiling to shape that space. His inspiration was Frank Lloyd Wright, who favored a lower entryway ceiling accentuating the “dramatic explosion of space” into a living area with a soaring ceiling.

“The prevailing idea for the house,” Gottlieb says, “was to be warm, understated, and comfortable.” The couple gravitated toward furnishings that are midcentury modern in spirit or in actuality: a clean-lined sofa and table and a vintage Lane credenza create a sleek, minimalist aesthetic. The light fixture has translucent ceramic shades that subtly glow when the light is on rather than shine directly in people’s faces. “We didn’t want that ‘third-degree’ feel,” he says.

The master bedroom got one major structural update. “We needed something to set it off from the rest of the house and the ceiling was the way to do that,” says Gottlieb. They tore out the ceiling and installed a cathedral arch with recessed lighting and a ceiling fan. The master bathroom, whose layout was “terrible and not very functional,” was gutted so Librizzi could start from scratch. “The idea was to make it feel like one big open room with the glass-walled shower,” he says. The floor tile is an earthy blue ceramic. The double-sink vanity and adjacent bench are spaced with bamboo panels to create a free-floating effect. Lighting is integrated into the cabinetry, and a bamboo-encased closet and glass door lead to the bedroom. 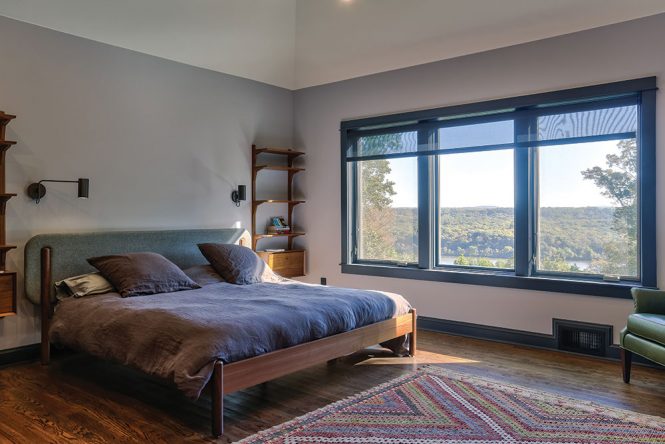 The master bedroom was opened up to create a vaulted ceiling for an airy feel. 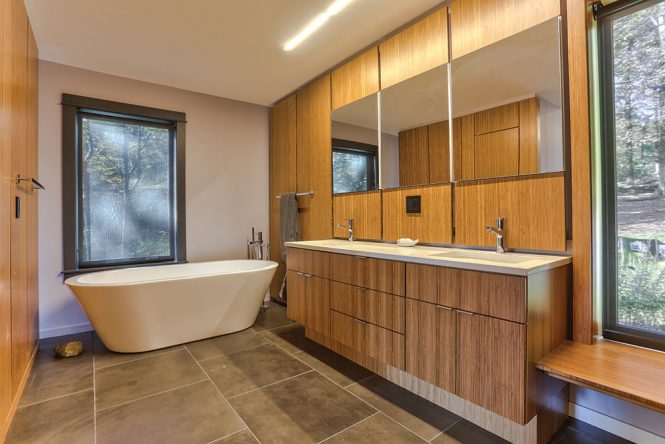 The master bathroom makes the most of the natural light, bringing in the outdoors for long soaks in the Porcelanosa bathtub.

The metamorphosis didn’t stop with the interior. The gardens surrounding the house and pool were revamped, inspired by the couple’s previous stays in the Hudson Valley. One rental, overlooking Mohonk Preserve, says Gottlieb, “showed us that all you need to feel like you are in your own peaceful spot on the planet is about three acres.” Aja Hudson of Earth Designs Cooperative in Rosendale became the couple’s “landscape whisperer,” he says, overhauling the property’s seven acres (since buying the original three-acre property, the couple purchased four additional adjacent acres of land). Eroding slopes were shored up with boulders and bluestone steps were installed, weighing 500 lbs. each.

The result is a welcoming refuge to which an array of wildlife is drawn, including bald eagles, bears, and foxes, which the couple enjoys seeing. “We really wanted to have a place to let our hair down,” Gottlieb says. “We wanted a place that was really tranquil and serene and that allowed us to feel like we were in nature and also protected.  We didn’t want a showcase home, but one that felt lived-in and livable.” 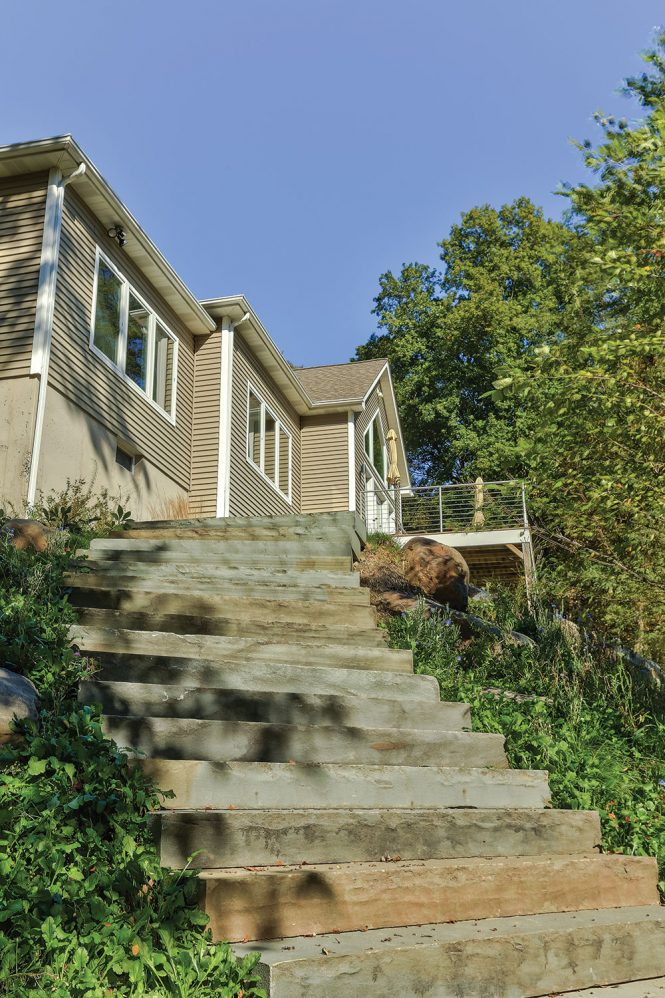 Bluestone steps lead from the house toward the Hudson River.