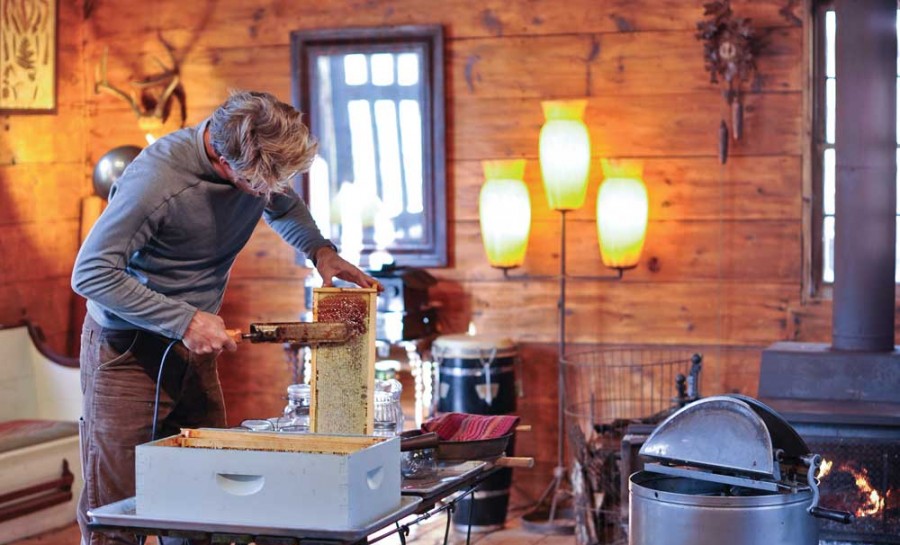 Stonegate Farm, a three-acre horticultural paradise in the Balmville section of the town of Newburgh, is a living photograph. The property is made up of outbuildings from an old estate that have been carefully preserved or reinvented with reclaimed wood, its lush acres ordained with neat rows of rare fruit trees and steel archways covered in Cecile Brunner climbing roses. The farm belongs to Matthew Benson, a writer, farmer, lecturer, expert on sustainability, carpenter, beekeeper, and, perhaps most important, a photographer, who lives there with his wife and two children. He has created a place where life and art intersect.

Benson was a freelance travel writer and documentary photographer in New York in 1994 when he met his now-wife Heidi at Martha Stewart Omnimedia, where they were both working. Heidi was still living at home with her parents on this very property, in what had once been the gatehouse for an adjacent estate called Echo Lawn. The house that is now painted barn red was then gray, and the plantings, having been left to their own devices, were an unruly mix of sumac, honeysuckle, wild grape, poison ivy, and Japanese wineberry. 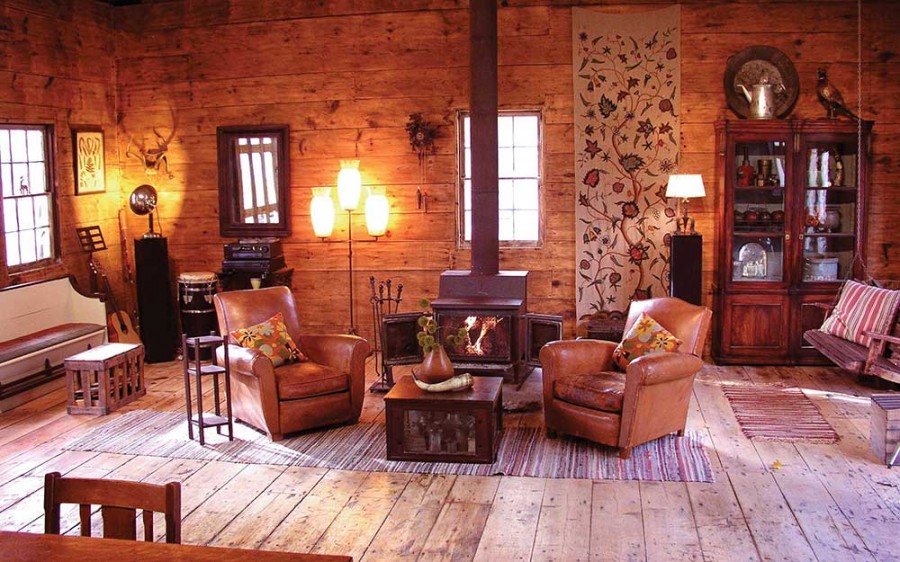 But the spot was lush and peaceful, and, after visiting Heidi’s family, Benson realized what his city life had been missing. Though he had lived most of his childhood in European metropolises, thanks to his father’s job in the Foreign Service, Manhattan never had the same appeal. He became aware of his desire to have a meaningful relationship with his surroundings. “New York City has imposed cycles that are different from the rhythms the world outside the city lives by,” Benson says. Tired of the mythology that New York was the center of the universe and longing to be closer to nature, Benson saw great potential in the gray house with the unruly foliage. After Heidi’s mother passed away and her father moved to Middletown with his new wife, the Bensons purchased the gatehouse and continued to buy up adjoining lots and former estate buildings as they became available. They had no idea what they would build, but they knew they wanted to preserve and revive the integrity of the grounds.

They began by refurbishing, and sometimes reinventing, the buildings on the property—among them a barn, stable, icehouse, shed, photography studio, and greenhouse—and adding some new ones. The Carpenter Gothic style of the original architecture combined with selective remodeling and a few additional structures resulted in a blend of 19th- and 20th-century design. The buildings marry preexisting architecture and lumber cut from trees that were felled by the elements. Using an industrial jack, Benson moved the icehouse and built from scratch a chicken coop and the studio. The shed is a board-and-batten-style barn he salvaged and then later restored. Benson did most of the work himself, in part to satisfy his need to imprint on his environment. “We artists are always looking for ways to articulate ourselves in the world,” he says. “Everything that passes through my hands gets changed somehow, and the experience is recorded.” 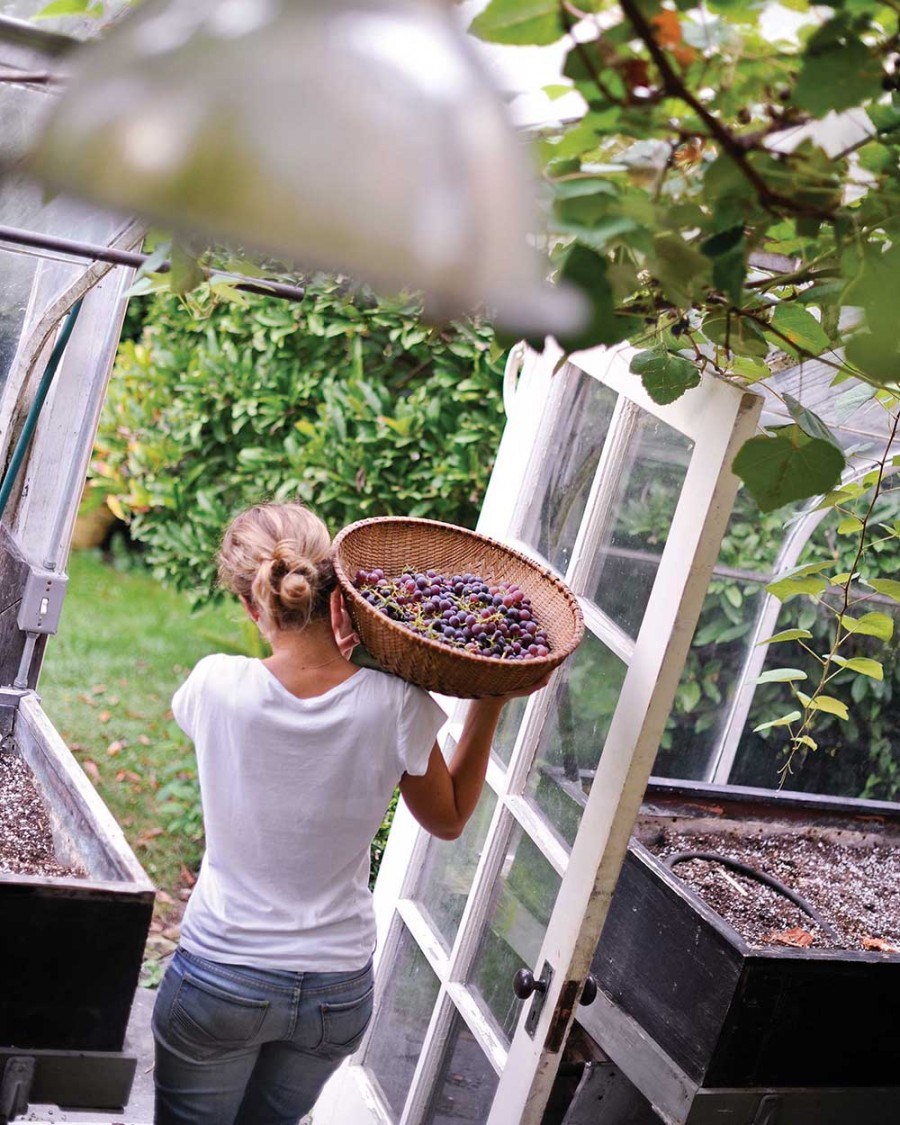 The interiors bear his mark as well. The integrity of the original structures is the framework, but within that he felt free to explore. The sink in the master bathroom is a perfect example. An old credenza that belonged to Heidi’s mother was fitted with matching his-and-hers porcelain ovals, and the lid of an old piano was used for the backsplash. “We were improvising a lot in the beginning, finding materials that we liked and had integrity and reinventing them,” says Benson. “All the pieces have a backstory and are all part of the sentence structure of my life.” He frequented an auction in Pine Bush and bought well-designed pieces with strong structural elements. The kitchen is full of freestanding forms that all have corporeal characteristics: a stove shaped like a matronly woman and her younger counterpart posing as the sink, modestly dressed in a floor-grazing skirt.

In addition to his workon and inside the buildings, Benson wanted to bring back the natural beauty that he envisioned would have belonged to such a grand estate. He cleared away undesirable plants and pursued farming and gardening the same way he engages all of his passions—with complete immersion. An avid reader, he researched relevant areas of study: botany, chemistry, insects, soil, the weather. He wanted to get his hands dirty—literally—so he began experimenting with soil, seeds, and minerals. Bensonpersonally tilled the land, fertilized the soil, and attended to every stage of the growth process. In 2011, he began keeping bees, whose honey changes color, taste, and consistency depending on the time of year.

When he wanted to add fruit trees to the mix, Benson consulted Fruit and Fruit Trees of America by Andrew Jackson Downing, a native son of Newburgh and a founder of 19th-century American romantic architecture. His text includes information on varieties that were once native to the region, but finding them turned out to be a difficult endeavor. After weeks of obsessive online research he found what he was looking for at Southmeadow Fruit Gardens, a rare-fruit nursery in Michigan: Hidden Rose, Maiden’s Blush, Devonshire Quarrendon, Kerry Pippin, Keswick Codlin, Holstein, and Golden Russet apples, among others. 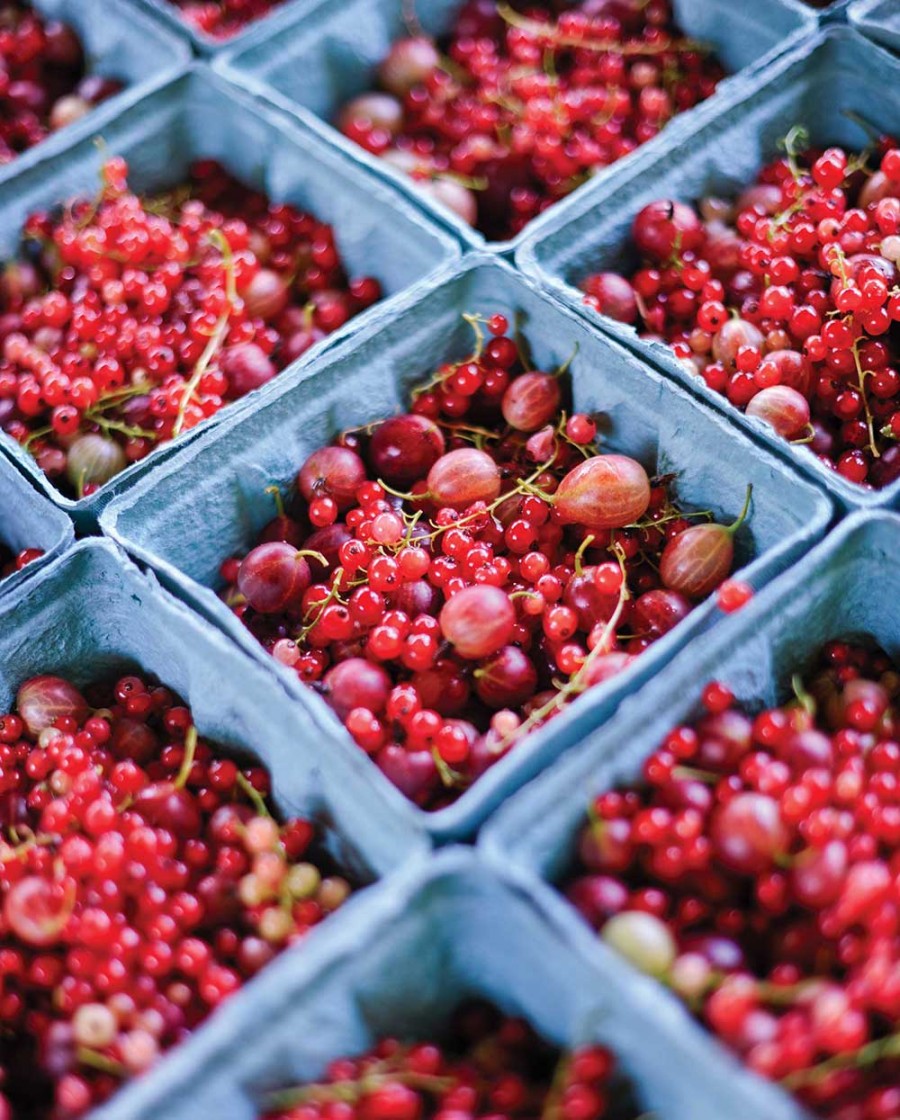 After an unexpected surplus of just about everything he grew or cultivated, Benson decided to form a CSA. For $395, members receive in-season produce, such as tomatoes, broccoli raab, eggplant, and kale, as well as
organic flowers and fresh eggs, every Saturdayfrom June to October. Once thefarm was firmly established, Benson successfully petitioned to have the land rezoned as an agricultural district. “The future of farming is small, family-owned businesses that are integrated into the community,” he says. Heis now the smallest agricultural district in Orange County, and the status is significant, as it provides exemptions for certain farming practices within a residential community.

As the “creative director” of the farm, Benson has reimagined the whole environment. Everything about the farm, from the rows of heirloom tomatoes and rare fruit trees to the placement of the buildings to the interior design, is about creating a balance between order and chaos. Benson has approached the design of his compound the way he would the composition of a photograph. 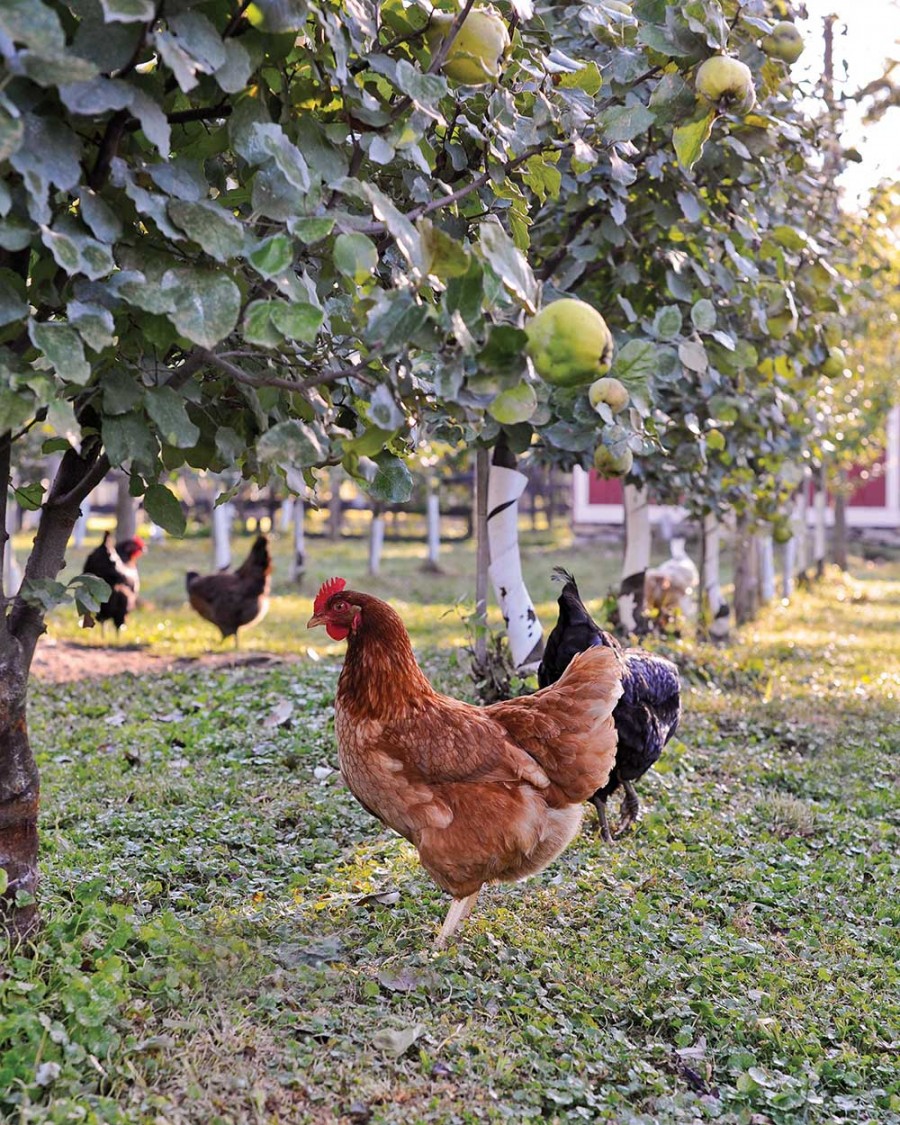 Each section is visually stimulating. Hothouse grapes are seemingly suspended in mid air and board-and-batten siding is draped in vines by the residential quarters. Between the Bensons’ main residence and the guest cottage is a 10-foot hornbeam hedge with an arched and gated passageway in the center—a sculptural boundary. Beyond is the farm, where plants are arranged in neat rows, with fruits, vegetables, and flowers grouped according to species and habit.

The chickens are free range, heading to the coop at night. Flowers, including edible varieties of calendula, borage, nasturtium, and anise hyssop, bring bursts of color and flavor into the mix. Benson might refer to himself as “the accidental farmer,” but there is nothing haphazard about this space. Eventually, the natural beauty of his surroundings began to pollinate his photography as well, and he started photographing the farm. When he showed his black-and-white photographs of flowers to an editor at Garden Design magazine, it landed him a job photographing the orchids at the New York Botanical Garden. After that, he began to favor horticultural and food photography over travel and documentary. 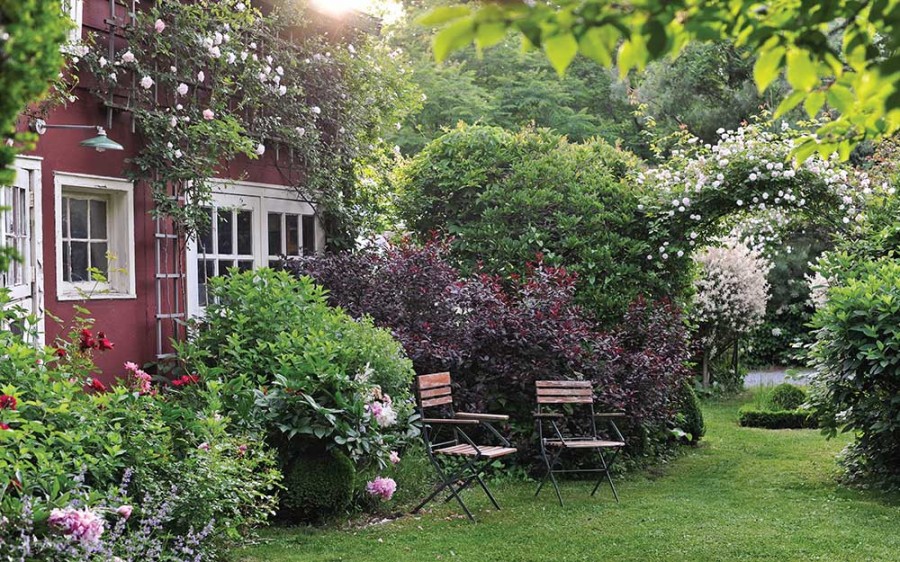 The notion of being organic has since transformed his whole aesthetic.“‘Organic’ is really a euphemism for ‘misshapen beauty,’ or the Eastern aesthetic philosophy of wabi-sabi, where imperfections, transience, and asymmetry have more value and are ‘more perfect than perfection,’” says Benson. “The more crazed and cracked the teapot, the wonkier the pear, the greater its integrity, beauty, and value.” Food is now his primary subject, in both his vocation of photography and his avocation of farming.

Now that Benson is an expert on garden design and sustainability, he is invited all over the world to give lectures on the subjects. But it’s the farm that feeds him on all levels, as it is also the source material for the book he is currently writing. He has imagined a world where eating is not only guilt-free, but also a nutrition-filled feast for the senses. Growing Beautiful Food, which demonstrates the symbiotic relationship between farmer and photographer, will be published by Rodale Books in 2015.