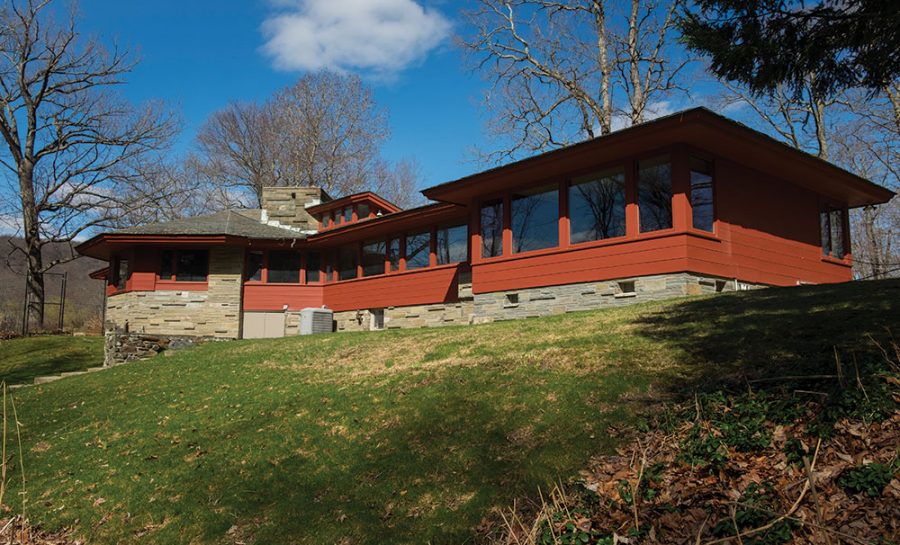 Architect Edgar Allen Tafel, who died in 2011 at age 98, was the last of Frank Lloyd Wright’s original apprentices. Tafel entered Wright’s Taliesin school in Wisconsin at the age of 20, fresh from New York University. Students at Taliesin learned by doing grunt work: stonecutting, drafting, making plaster and cement, sharpening Wright’s pencils. Tafel, who was a pianist, also provided background music—Bach—for Wright to work by, as well as did drawings and supervised construction for two of Wright’s most important commissions: Fallingwater and the Johnson Wax Building. Tafel prospered at Taliesin until 1941, when Wright discovered he had taken on a freelance project and declared, “There can only be one prima donna here—and that’s me!”

Tafel quit immediately and began working in Chicago, where Wright was known as “Frank Lloyd Wrong.” After serving in World War II, Tafel returned to New York City and started his own firm, quickly gaining a reputation as a contrarian for bucking modernism to design a traditional Gothic addition for a 19th-century Greenwich Village church. 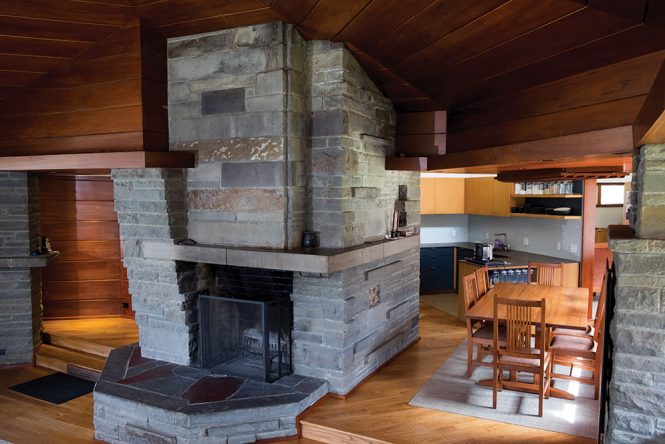 Where the woodwork is new, BKSK Architects’s Harry Kendall opted for a lighter honey stain, rather than the deep red of the original cypress.

In 1946, Tafel found the ideal clients with loose purse strings: his Russian emigre parents. He built them a weekend house in Croton, an easy commute from Manhattan, where they ran a very popular gown company, with his father designing and his mother sewing the garments. Tafel’s parents’ request was simple: a compact house requiring little housekeeping and enough room for Tafel and his brother to visit. But the site—a wooded lot overlooking a small, private lake—was demanding. The water view was to the north, and the topography required the main mass of the house to run north to south. Tafel’s challenge was to maximize light and the view—without a southern exposure.

“The minute we walked into the living room, I knew it was the house we had to live in for the rest of our lives,” says Deborah Benzil, a neurosurgeon, who, with her husband, molecular biologist Paul Finch, bought the midcentury-modern gem in 1999. They were enraptured by the six-sided living room’s fieldstone fireplace wall, cypress woodwork, and giant windows. “It had a brilliant sense of organic earthiness, but it also felt spacious,” she says. “Every window had a direct view of the pond. It was beautiful, but at the same time natural and welcoming.”

In the 1980s, the floor plan had been expanded from 2,000 to 2,400 square feet; Benzil and Finch updated the house in 2014, after living there 15 years. The midcentury lighting and electrical and heating/cooling systems needed replacing. Plus, says Benzil, “The floors had gotten beaten up, and the kitchen and bathrooms were definitely outdated. Our teenage kids had really beaten up one of the showers. It was all that kind of stuff that kids and cats and dogs do over time. In the end, we did an almost complete renovation. Most of the house, other than the living room, was taken down to the studs.” 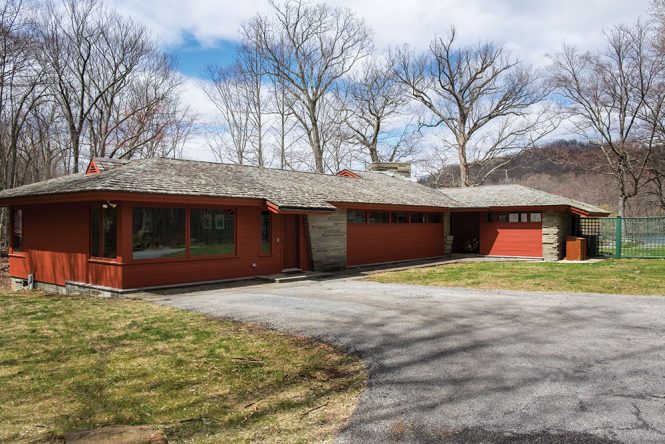 For the “regeneration,” Benzil turned to Harry Kendall of BKSK Architects in New York City. “The firm had a great combination of honoring the traditions of a house and also a willingness to understand that this wasn’t a restoration,” she says. “We weren’t looking to restore it back to something from the 1940s; we were looking to infuse new life into it.”

By then, Benzil and Finch’s two children had grown up and moved out, leaving them empty nesters. Kendall reconfigured the layout accordingly. Originally, the kitchen and living room hearth formed the center of a wheel—“classic Wright,” says Kendall)—from which were “spun” a master bedroom and bath, screened porch, and dining area. The heart of the house was reached from the main entrance—located at the opposite end, next to an office/guestroom (converted from a carport)—via a long hallway lined on one side with doors to two guestrooms and on the other with looming cabinets. “Our lives had changed,” says Benzil. “The way it was structured, the whole middle of the house was kind of dead except when our kids came to visit. That didn’t make a lot of sense, so we flipped the house around.” 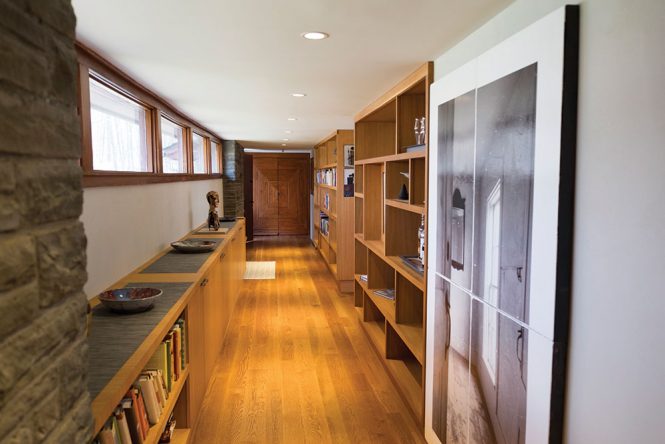 the architect opened up the hallway to link the front entrance with the heart of the house;

Kendall busted open the guestroom walls, creating a spacious family room that’s separated from the hallway by open shelving. The built-in cabinets were reduced to waist-height, alleviating the tunnel effect. Kendall used chestnut-colored wood for both the hallway’s shelving and a floating closet in the master bedroom, rather than repeating Tafel’s red cypress. “It’s an homage,” he explains. “Most of the time, when we put in something that’s not original, we show what’s been changed. It’s out of respect; we’re not rewriting history.”

Mid-Mod Comes into the 21st Century

He describes the updated house as “us looking back from the modern era,” noting, “Change is inevitable, even to something as well thought out as this [house].”

Though the house is clearly influenced by Wright, Tafel managed to avoid his master’s signature structural pitfalls. “Tafel was a good engineer and he made houses that were fit to live in,” says Benzil. “He never had a roof that leaked or doorway entrances that were too low for tall people. He would tell you he took all the best features of Frank Lloyd Wright, but made them practical.” 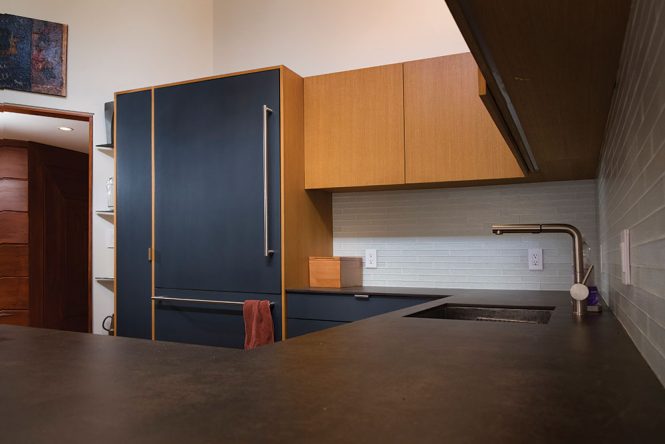 The kitchen retains its midcentury sensibility as well as its warmth, in part thanks to its original cypress woodwork.

The bedrooms remain small. “You didn’t need a big room, because you should be outdoors reading, gardening, riding bikes—doing stuff,” Benzil says. “That was the kind of thing Tafel believed in. Also, that the house should fit the space and complement what’s around it and not do battle with it, conflict with it, or upstage it.”

The woodsy setting remains a huge selling point. The house is sited “in an atypical fashion,” Kendall explains, to make the most of its lake views. “All the exposures were northern exposures,” Benzil says. “You could sit in every room and have a gorgeous view, but this also meant the house was a little bit dark. BKSK worked really closely with us to bring light into the house. That was the other major component here—to maintain Tafel’s vision, but at same time give us something that was a little more user-friendly and full of light.” 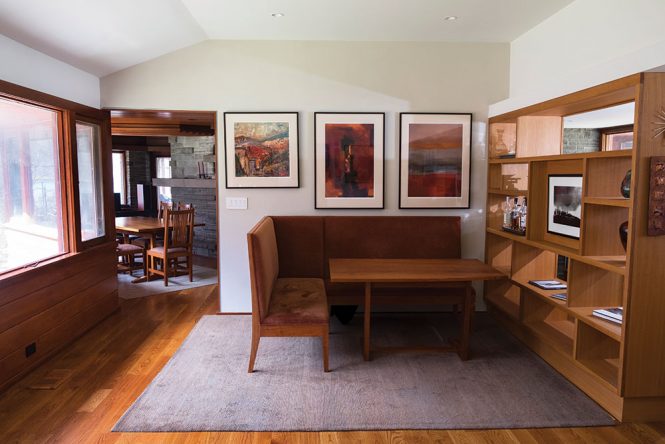 by knocking down the walls of the original guestrooms, the architect created a relaxed den with a scrim of open shelving.

The skylit kitchen is still small and midcentury style, but with added amenities. In 1948, Tafel’s mother told Architectural FORUM that it was a “warm, beautiful room…together with the warm (cypress) woodwork and the sunlight streaming through the high windows, it is a wonderful place to work.” It still is, Benzil says, only now it’s more functional.

The living room is also little changed, Kendall says. “It’s a sacred space, in a way,” he says. He added a large window on one wall to make the absolute most of the view. From the screened porch, says Benzil, “There are really almost no other houses visible in the summer.” She and her husband spend time there relaxing and gazing at the view.

“I have a pretty stressful job,” she says. “The thing that has always struck me about this house is that when I walk into it at the end of the day, I can viscerally feel my blood pressure drop, and my heart rate and breathing slow. It really has the capacity to bring calm and peace.” 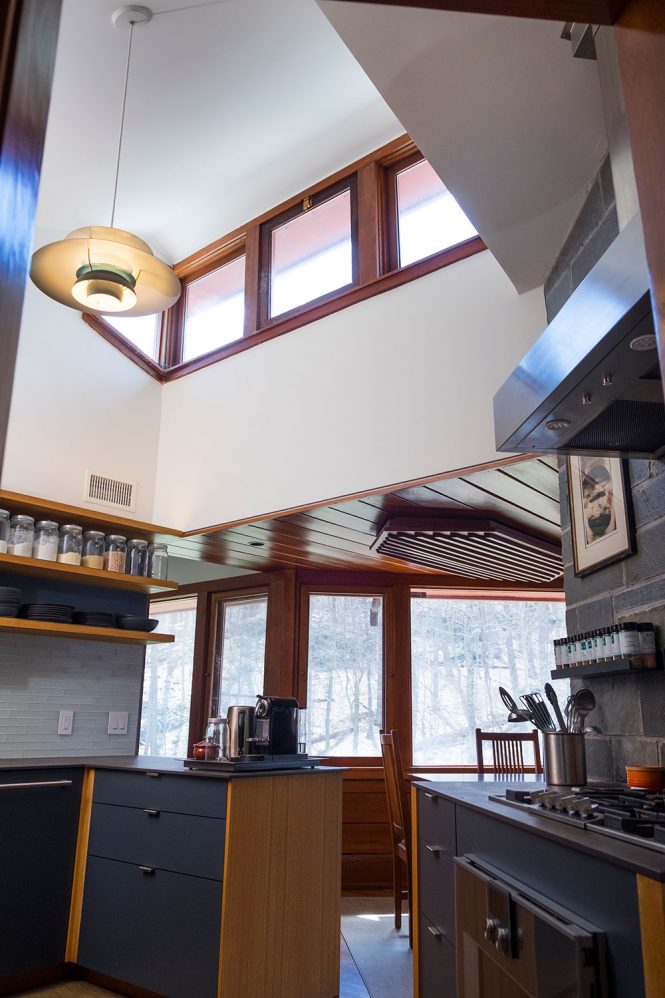 The kitchen’s original skylight brings in plenty of sunlight, but the architect covered the wall behind the stove in stone to tie it to the central hearth in the next room. 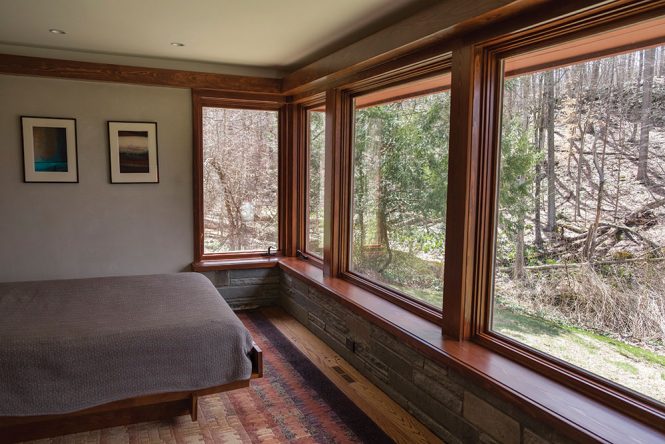 the bedrooms remain small in keeping with Tafel’s philosophy about having an active lifestyle; the windows in the renovated guest room wrap around the corner of the house (a nod to the open carport that was once there).