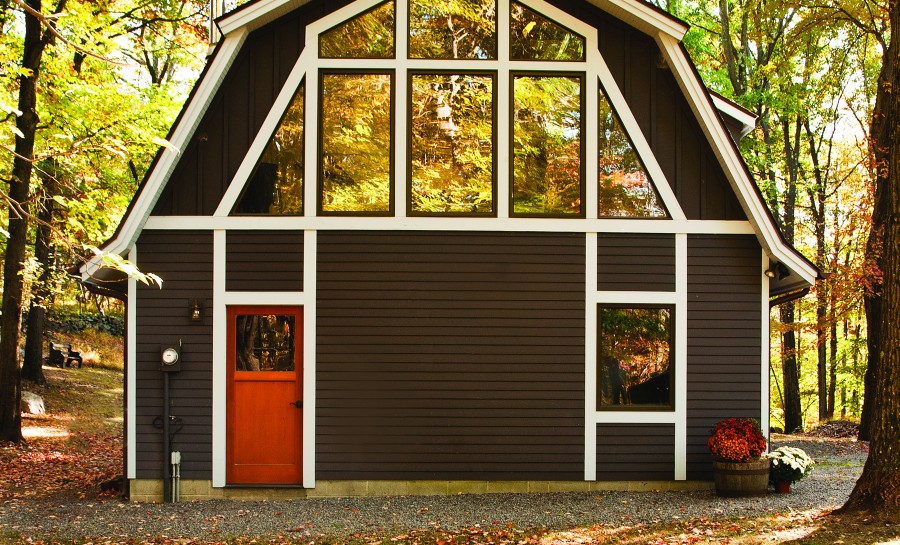 The former Colonial-style barn that Hudson Design Company turned into an office for writer Sarah Dunn in Garrison is almost spartan in its simplicity. But that simplicity belies the whirlwind of activity that takes place inside.

“I’m in the middle of two big projects right now, so an hour ago there were papers spread out all over the entire place and it looked like a mental patient lived here,” says Dunn with a laugh. Dunn is both a television writer—she’s currently working on a pilot for ABC titled The Second Fattest Housewife in Newport—and a novelist who’s finishing her third book for Little, Brown and Company. The Arrangement, to be published in 2016, is about a happily married couple who embark on an open relationship for six months. “Which, for the record, I did not do,” Dunn says, laughing again. 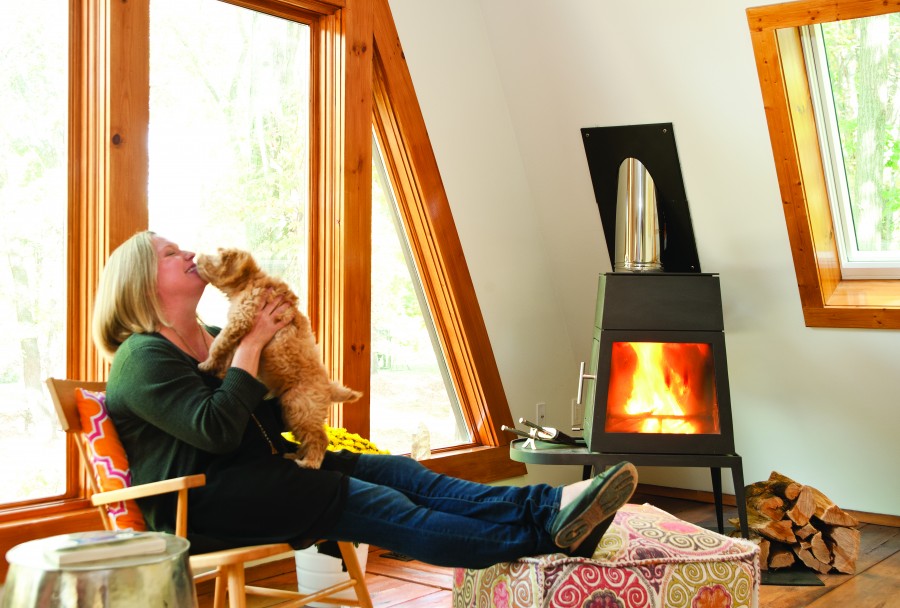 Dunn’s multiple long-term projects necessitated a space in which she could not only work but also live, if needed. When she and her husband, Peter Stevenson, deputy editor of Men’s Journal, bought the six-acre property, she took one look at the old horse barn out back and knew it could become that separate space she’d dreamed about. The barn, like the house itself, was built 30 years ago, but in First Period Colonial style, with a steeply pitched roof, mimicking the 1680s instead of the 1980s.

“Sarah expressed a predilection for authenticity,” says architect James Copeland, Hudson Design Company’s founder. “But she gave us some latitude as to how we went with that.” Copeland and Hudson Design’s interior designer, Michael Maggio, rehabilitated the parts of the 1,280-square-foot barn that were usable, including the sliding barn door that now reveals Dunn’s office; for the remainder, they salvaged comparable materials from similar local barns, including wood flooring. “Since we’ve been doing this a few years, we’ve come to know some people who have an eye for materials and authenticity,” says Copeland. “And collaboration produces the best product. Sarah trusted us, and so this is what happened.” 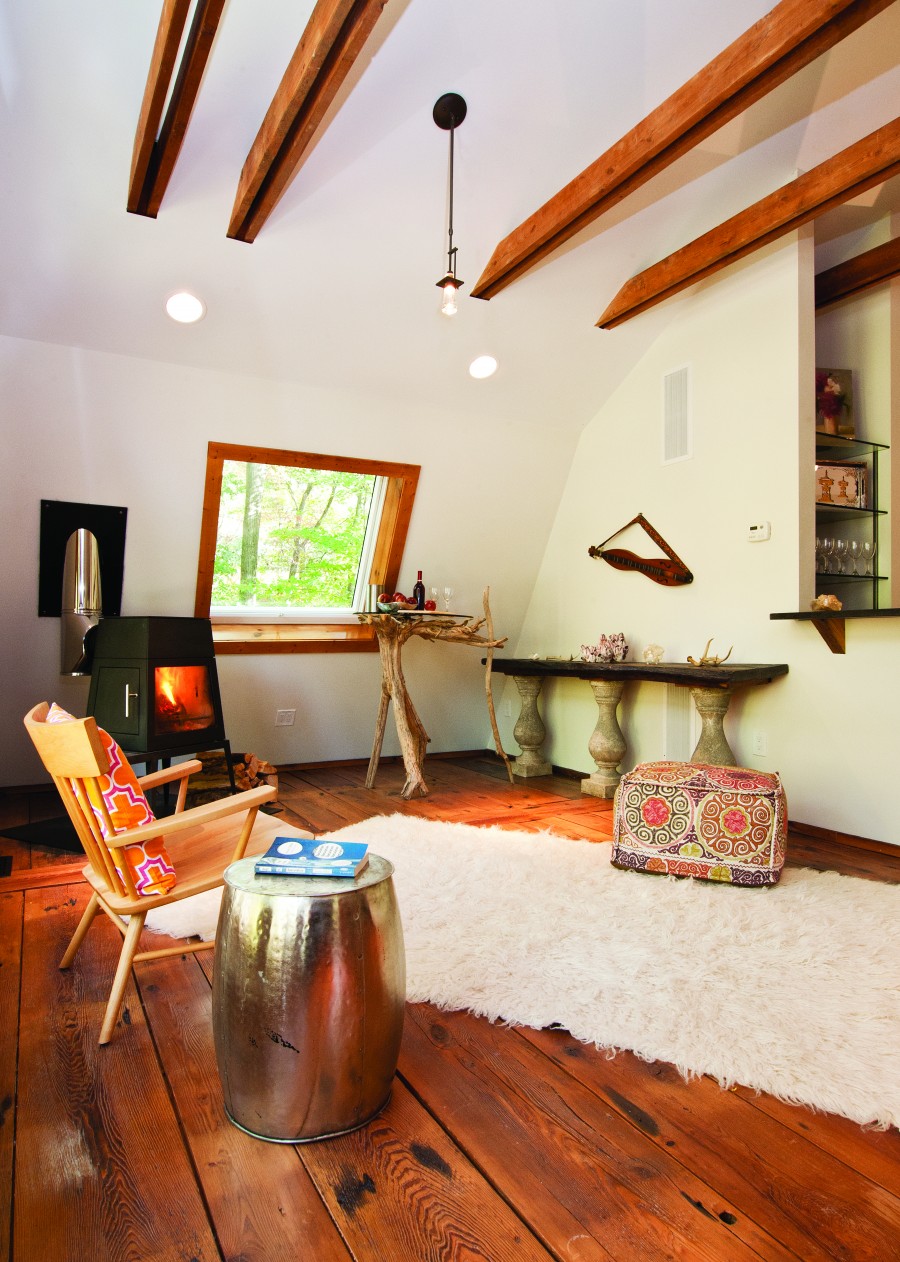 “I did not make very many demands,” says Dunn. She then turns to Copeland. “Wouldn’t you say I was an undemanding client?” Now it’s Copeland’s turn to laugh. “Sarah,” he says, “it was fun.”

Dunn had a few modest requirements: a short counter with two burners and a sink for a makeshift kitchen, and enough room in the bathroom for an enormous bathtub. When she’s stuck on a project, Dunn either takes a long bath, perching her notes on a wooden plank stretched over the tub that acts as a desk-of-last-resort, or pulls out one of the dozens of 300-piece jigsaw puzzles she keeps. She spreads the pieces out on the floor, finishes the puzzle in one sitting, and then goes back to work. 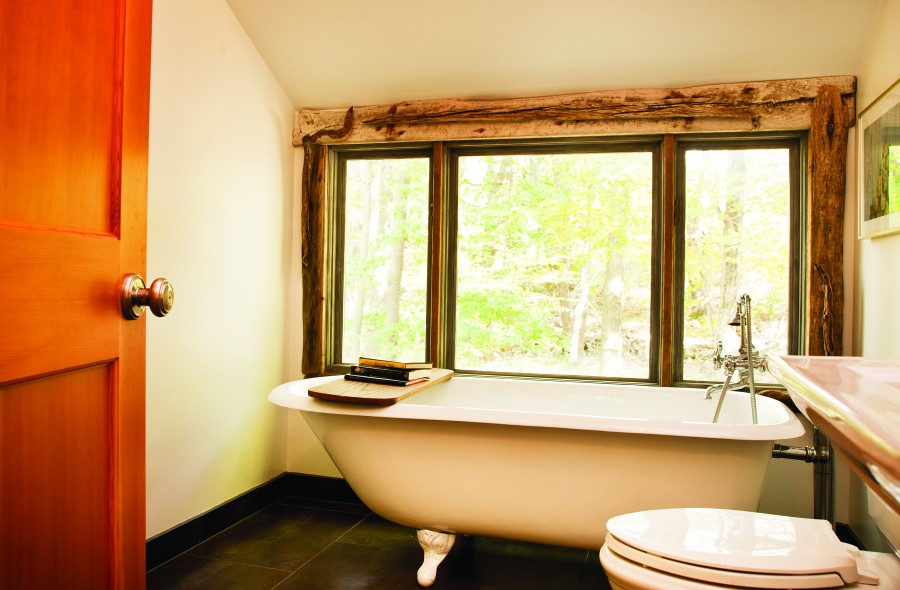 The barn’s enormous windows illuminate the space from all angles and offer panoramic views of the woods. Dunn used to keep chickens in the yard until the sight of them getting picked off by foxes and hawks proved too distracting.

Random poultry slaughters aside, the space is free from distractions. It has little ornamentation, or even furniture, which is intentional, as Dunn doesn’t want people to view the office as someplace to visit, even though she allows her parents to stay there. “I hosted a fundraiser for my kids’ school here once,” she said, “and all of the other moms were like, ‘How do I get a barn?’”

But while the space remains separate enough from Dunn’s home life to allow her to focus on her work, it’s close enough to allow the line separating work and home to become porous when she needs it to be. The office houses only a simple wooden desk, a worn office chair, and a gray couch that’s soft enough for comfortable sitting but too short to sleep on. But when Dunn invites her home life in, the office easily accommodates.

“I had to pull an all-nighter to turn in part of my novel,” she recalls. “My five-year-old daughter wanted to be in here with me, so I had to have her watch a movie. I blew up the air mattress in here for her, wrote until six in the morning, hit ‘send,’ and then curled up on the couch next to Alice’s mattress. And I thought: This is really nice for a woman writer. First, to have an apartment of one’s own, but also for Alice to see what my work is. It captures why I wanted this, and wanted it near the house.”