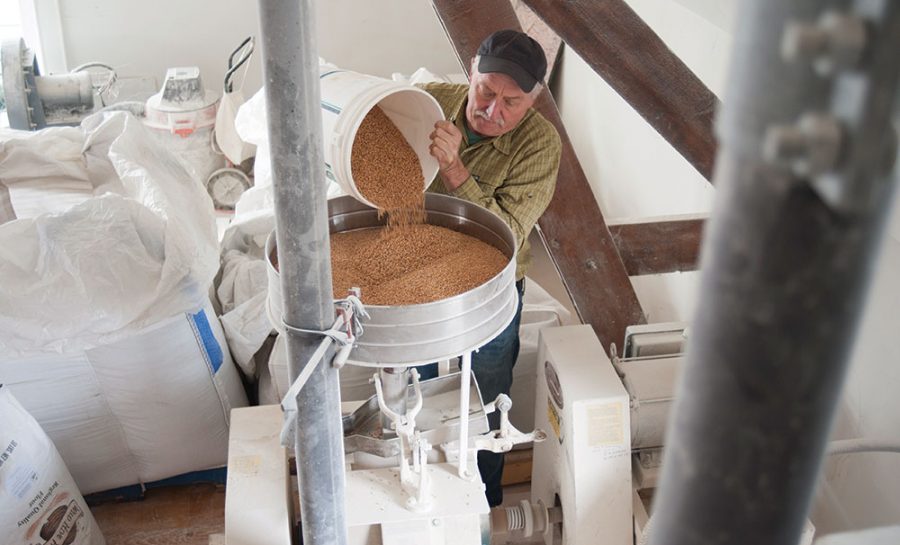 Just before the turn of the millennium, farmer Don Lewis of Wild Hive Farm, located in Clinton Corners, northern Dutchess County, was handed a bag of fresh, organic flour milled from locally grown heritage grains—and his life changed. Since then, he’s been on a mission to revive the region’s long-lost grain-growing industry.

As a longtime beekeeper and renowned purveyor of honey, as well as a master baker of honey-rich breads and proprietor of a popular bakery cafe, Lewis was on a routine trip for chicken feed at neighboring Lightning Tree Farm when the farmer there, Alton Earnhart, mentioned that he had just harvested his first batch of organic wheat, succeeding with a seemingly radical experiment. “Locals had told him it couldn’t be done, but he knew his history and knew better,” Lewis recalls. “He went out and bought the seed and a small mill; he’d harvested 5,000 pounds of wheat. [Earnhart’s] wife was baking cookies [with some of it], but most of it was for chicken feed.”

As soon as Lewis touched the flour, everything in his life changed. “I stuck my hand into the bag of flour he gave me and everything about it—aroma, taste, feel—was so very different,” he says. “With some work and experimentation, I figured out how to work it into my product line,” he recalls. “At that time, it had been 80 years since grain was grown in the Hudson Valley for human consumption.”

As Earnhart and Lewis were both aware, in Revolutionary times, when local food production was the only choice, the Hudson and Schoharie valleys shared the role of national breadbasket. George Washington’s army was fueled by New York State grain. But by the 20th century, when agriculture’s focus turned large scale, grain production was taken over by the Midwestern states—and the Hudson Valley grain industry was seemingly lost.

The positive responses that Lewis got to his early experiments in baking with Earnhart’s wheat convinced him that local grain growing was an art that deserved to be revived. He encouraged Earnhart to ramp it up. “Every year after that, I convinced him to grow more acreage and more variations, milling and sifting by hand,” Lewis says. “Within a couple of years we were up to 20 tons. I built my first milling operation in 2002, and he increased his acreage and varieties. By around six years later, everything in my bakery  was 100 percent fresh-milled flour.” 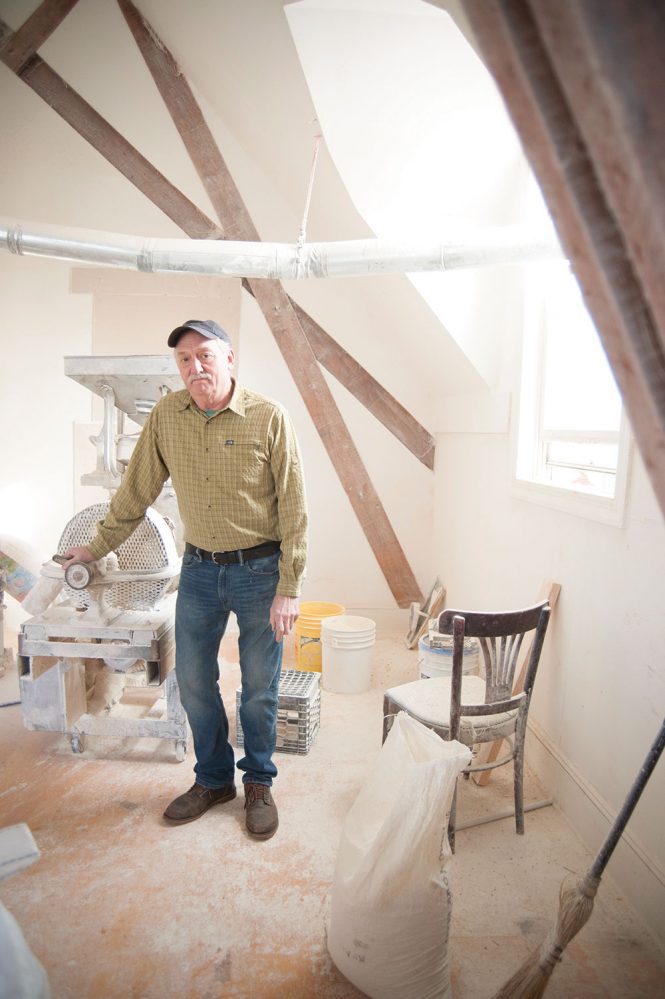 It turned out that there was a ravenous appetite for fresh-milled, local flavor. “I worked on my own bakery first, then started retail and a little wholesale,” Lewis says. “It took time to build capacity. I didn’t start this with money to invest; I started with duct tape and shoestrings and constant forward pressure, and it all lined up. I got to a point where I needed a larger mill and more storage.”

In 2007, chef Mario Batali’s Eataly USA was seeking a flour source that would allow the operation to replicate the bread of Turin in Northern Italy, but nothing was working out. At least not until Lewis came into the picture. “Then one of the upper partners remembered meeting some crazy guy from New York who had a mill at the World Food Conference, and reached out to Slow Food International for my contact info,” he recalls.

As a baker with increasing expertise in fresh grains, Lewis understood Eataly’s problem. “I saw what it would take,” he says. “I looked at flour from Italy and realized I could replicate the combination of grains they needed to build the loaf they wanted.”

Once grain samples were approved by Eataly’s headquarters in Turin, Lewis took the opportunity and ran with it. “The Eataly demand enabled me to flesh out the whole operation, add acreage,” he says. “They helped finance things the growers needed, like infrastructure and soil amendments.”

“For food security and consistent production, we needed to reach past the immediate area and collaborate with several local systems,” he says. “We swap supplies with each other if someone has a bad year.

“Between here and the Canadian border, there are about a dozen models of grain-based food systems, all doing something similar,” he notes. “A thousand acres or so is grown for human consumption; my project is one of the larger ones.”

There have been many lessons to learn, he admits. Northeastern heritage grain varieties, unlike their mass-produced cousins, are loaded with personality; from field to mill to bakery, lost arts had to be learned. “I learned by doing,” says Lewis. “There were no tutorials on milling. I ruined a lot of wheat at first, but I couldn’t afford not to make it work, and now I have no problem helping a [local] bakery rebuild an ethnic bread from back home. Fresh flour bakes differently, it hydrates differently; there are a lot of variables you don’t have to consider with commercial flour.”

In 2012, Lewis closed the Wild Hive Farm Store & Cafe Bakery—a beloved Dutchess County institution that was featured in the Culinary Institute of America’s Food, Wine and (Agri)Culture tour program—so that he could devote his attention to grains. He still keeps and breeds bees for fun, and grows a few test plots of experimental crops, but grain has become his primary focus, fitting in with his larger mission: sustainable local agriculture and food justice.

“This model we have created here lays the groundwork for a regional grain-based food system,” he says, “which will help bring food security to the Northeast, provide a more nutrient-dense food supply, and give fair value to growers and consumers.”

Lewis’s passion has made him a national leader in the regional grains movement. “I knew that the grain project and milling was going to catch on and I had to get busy,” he says. “Finding ways to improve agriculture and the food system is my focus; I love that. It takes a team, not just a concept and money. I’ve got a concept for a different kind of storage that I think will work and help food security everywhere. I do consulting for folks with the wherewithal and interest; I work with Cornell and the Farm Hub in Hurley, advising them on strains. I lecture at colleges and organizations about food systems, grain, honeybees.”

And while many grain farmers and bakers see the anti-gluten diet trend as a “craze” they hope will eventually pass, Lewis finds it inspires him to fight harder for sustainably grown grains and food justice. “A lot of the digestion problems people have with commercial flour are related to dead wheat, spoiled gluten,” he explains. “Commodities brokers will hold wheat for a year to drive up the price. Commercial flour has a one-year sell-by date; ours is three months. Freshness is key to flavor, and to people being able to eat bread without suffering. It’s a global problem—food insecurity and poor nutrition—and I live to be part of the solution.” 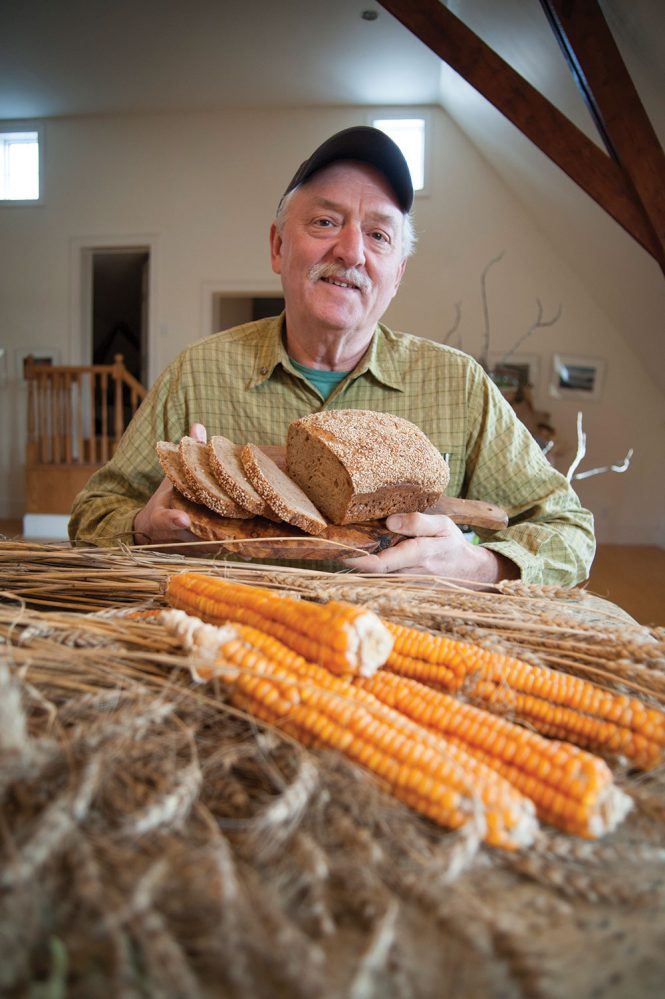 At his farm, Lewis bakes whole-wheat bread from his own milled grain and grows heirloom corn. Photo by Roy Gumpel.