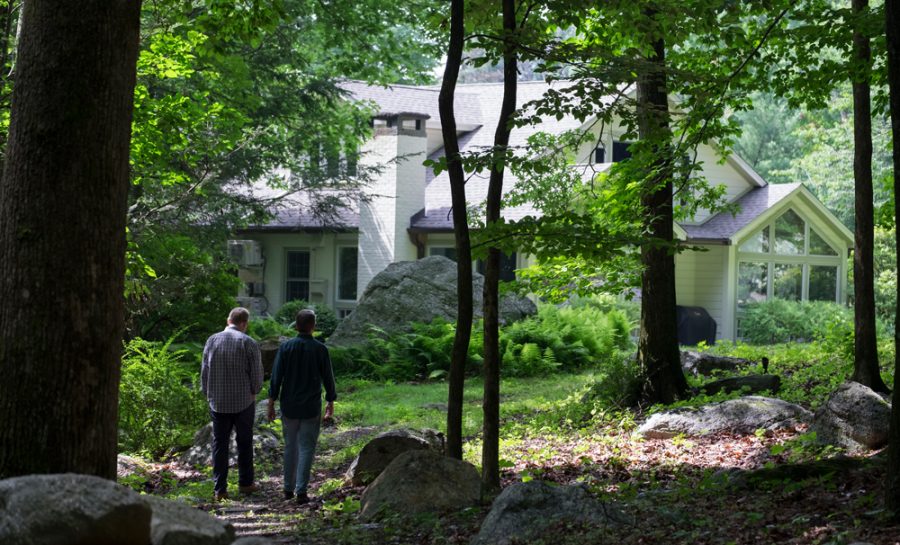 Doug Wallingford and Rick Seer only wanted advice on what color to repaint the exterior of their 1880s farmhouse in Gardiner. But the couple enjoyed working with Lillian Thiemann of Vivid Design Studio so much that they asked her if she’d help them remodel the house’s four bathrooms. When Thiemann entered the seemingly typical 1880s farmhouse, her jaw nearly hit the floor. “From the outside, you have no idea that something so magnificent is inside that house,” she says.

To step through Wallingford and Seer’s front door is to be transported back in time and space to early-20th-century Pasadena, where the British Arts and Crafts movement was inspired by coastal California’s sunlit forests and clear skies to develop a new regional dialect. The Gardiner house’s commanding mahogany staircase, which features an angled balustrade and is lit from above thanks to an expansive swath of windows on the upstairs landing, is a small-scale riff on the grand staircase in the Gamble House in Pasadena, an Arts and Crafts touchstone designed by Greene and Greene, an influential American architectural firm founded by brothers Charles and Henry Greene. 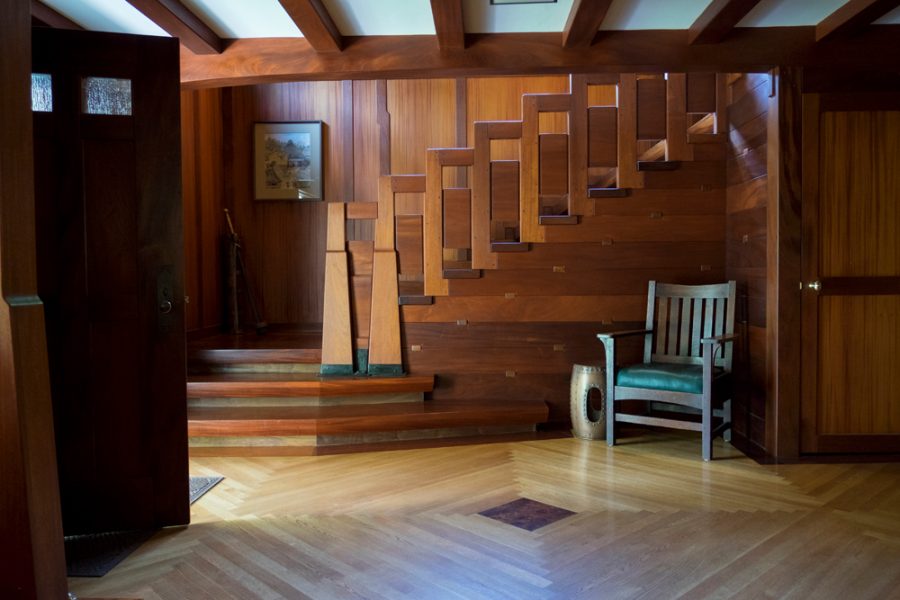 The mahogany staircase, with its angled balustrade, is a miniature version of the famous grand staircase in the Arts & Crafts-style Gamble House in Pasadena.

In Wallingford and Seer’s 3,000-square-foot farmhouse, the staircase is complemented by mahogany support beams across the low-slung ceiling of the adjacent living room, where the original stone fireplace serves as the focal point. Plush leather chairs and Mission furniture accent pieces help create a space evoking a hobbit house designed by Frank Lloyd Wright and tucked away just off the Pacific Coast Highway.

Standing on the Shoulders of Giants

Wallingford and Seer can’t take complete credit for the farmhouse’s Arts and Crafts design. The late real estate magnate Julien Studley bought the clapboard house in the 1990s and, while traveling out West, visited the Gamble House and fell in love with the style. Seeking to redo the Gardiner house in a similar fashion, he found someone perfectly fit for the job: Matthew Bialecki, an architect from Southern California who had recently relocated to New Paltz and was already familiar with the Western Arts and Crafts movement, as well as its British roots and Northeastern vernacular. 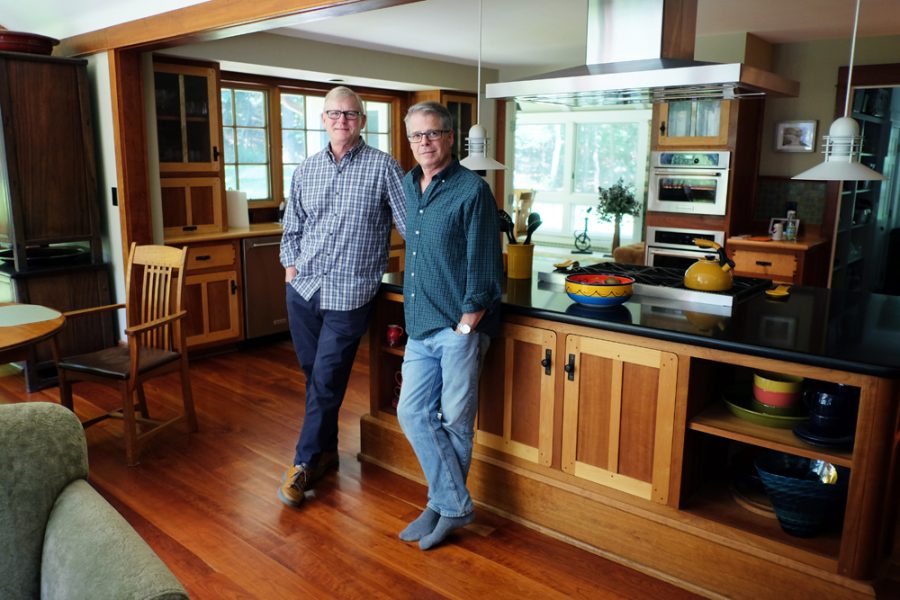 Wallingford (left) and Seer (right) have combined Arts & Crafts-style cabinetry with colorful pottery and other items to create a cozy kitchen.

It was American furniture designer Gustav Stickley who brought the budding movement from England to America, initially to upstate New York, in the early 1900s; he wrote in 1909 that the movement’s aims were “simplicity, durability, fitness for the life that is to be lived in the house and harmony with its natural surroundings”—all principals that the Gardiner farmhouse exemplifies.

Considering Wallingford and Seer’s backgrounds, it’s hard to believe that the house wasn’t designed especially for them. Both men have roots in New York City, where Wallingford worked as a banker for J.P. Morgan Chase and Seer was a theater director. They individually migrated out West, where they met over 20 years ago when Seer began teaching at the University of San Diego. From there, Wallingford transferred to Japan for work, another place where the Arts and Crafts movement took hold, and the couple continued a long-distance relationship until he retired and returned to San Diego, where they married. But at their modern California house, the couple found that their collections of Mission-style, Stickley-designed, and Japanese furniture, along with the art Wallingford brought back from Japan, never quite fit in.

When a Hudson Valley-based friend happened to tour the Gardiner farmhouse soon after Studley put it on the market, he called Wallingford and Seer. The couple had already been discussing eventually relocating to the Hudson Valley, and immediately after seeing the farmhouse, Seer began arranging his early retirement. “We saw this house and thought, ‘Our furniture belongs here,’” says Seer. “It’s also enormously atmospheric. This [living] room, for example, would be wonderful to stage an Agatha Christie play in.” 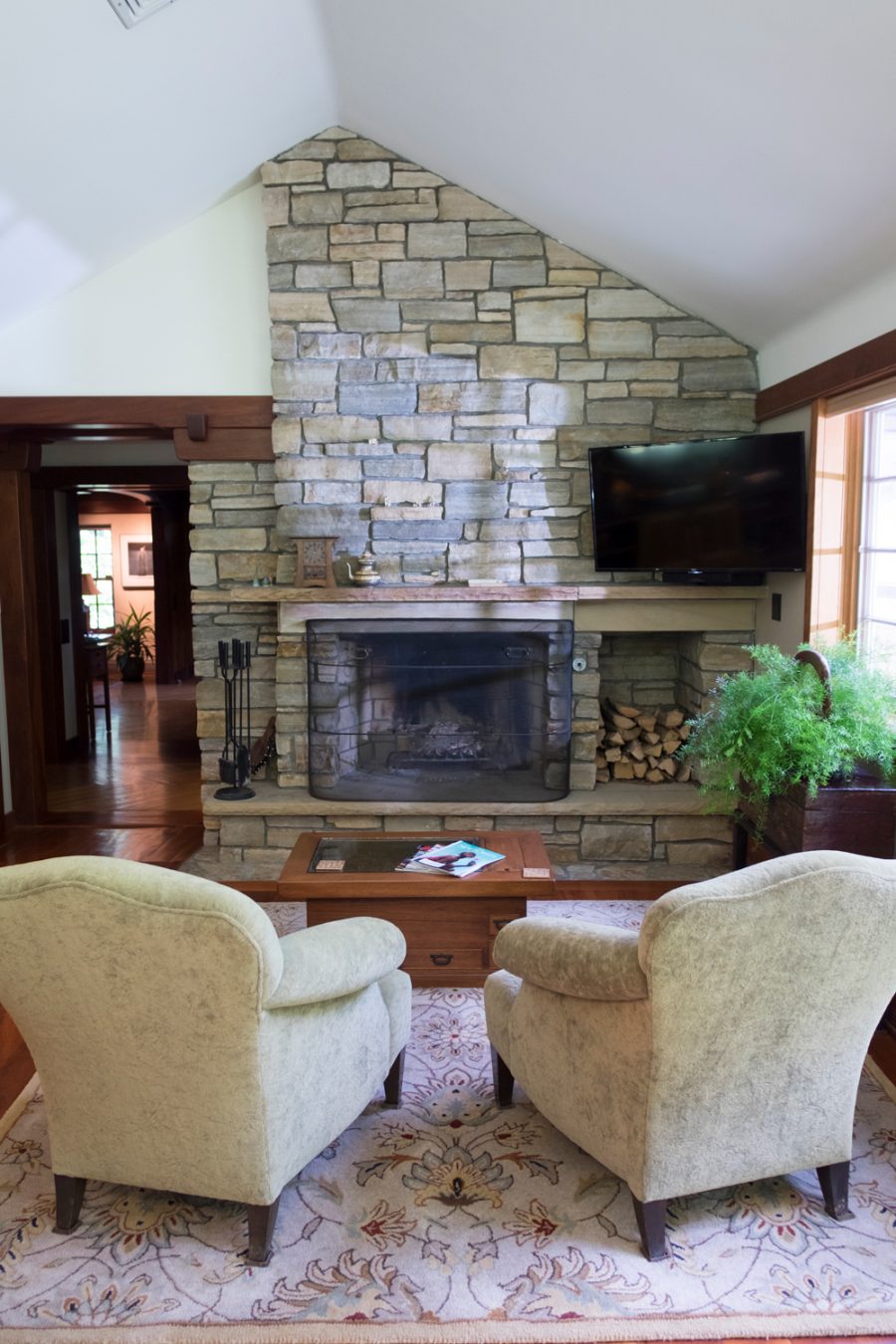 The Matter of the Bathrooms

Speaking of grisly mysteries, there was still the matter of the bathrooms. As Thiemann discovered, they were not done in the same jaw-dropping style as the rest of the house. The walls had been covered by the previous owner in dark gray slate tiles, a style that the couple diplomatically refer to as “modern industrial chic.” Popping a few of the tiles off answered the question of why they had been chosen: The bathroom walls were in need of extensive repair. “Dark tiles hide a multitude of sins,” says Thiemann. 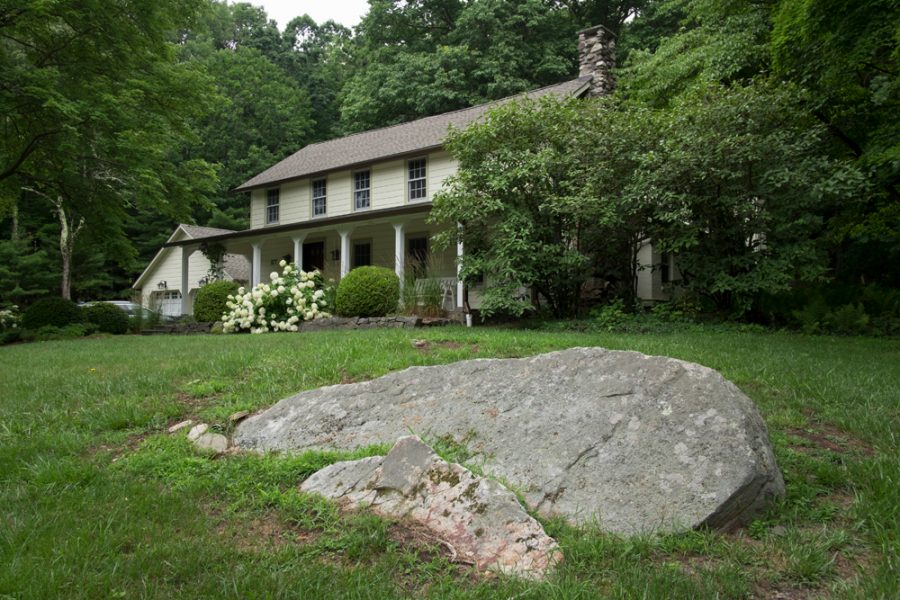 Once McMahon’s Contracting Service repaired the walls, Theimann got to work designing bathrooms tying into the rest of the house. In the downstairs powder room, which she figured would get the most foot traffic, a wooden sink with a gold faucet nods to the Arts and Crafts style, and golden tiles seem to float across the floor, making the room glow. The secret, says Theimann, is in the grout. “It’s a light-colored grout, but it has little pieces of yellow metallic, a tiny bit of translucent bling,” she says. “But not so much that it pulls your eye away. It’s almost like a vibration between the tiles, the way the light hits it. That’s what gives it that float effect.” The golden tiles are also used in the backsplash of one of the two upstairs bathrooms, both of which also take advantage of brightly colored tiles and skylights to offset dark wooden cabinets.

All in the Details

Light is an essential element in one of the house’s other significant renovations. The dark, luxurious wood tones associated with Arts and Crafts homes is conducive to Southern California’s endless bright summers, but not to dim Hudson Valley winters. Additional lighting fixtures, rimmed with strips of wood in a manner evoking Japanese lanterns, were installed throughout the house to combat shadows and illuminate the intricate level of detail that went into Bialecki’s renovation. 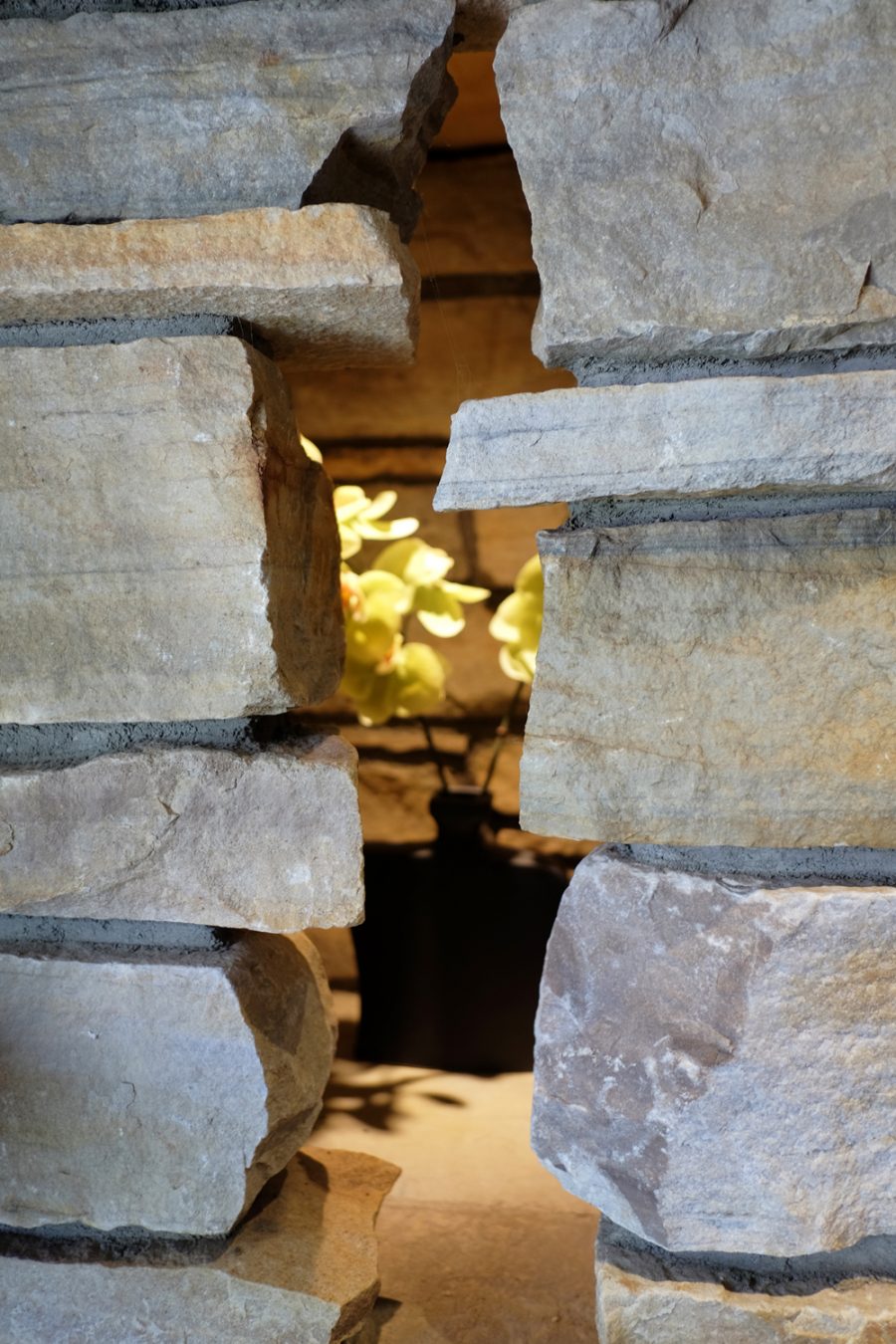 Even after two years of living in the house, Wallingford and Seer admit that they still sometimes walk through it like children in a candy shop, amazed at its craftsmanship. In the four upstairs bedrooms, for instance, built-in bureau drawers appear shallow but actually plunge deep into the walls, and intricate woodwork hides all traces of nails or screws. And throughout the house, the ornamentation on the drawer pulls, columns, and doorways continues to surprise, and in one case, confound the couple: A metal wheel that looks like something from an Art Deco bank vault sits on the door to the master bedroom. “It looks like you just turn it, but you don’t,” says Seer. “I tried that the first time we toured the house and ended up accidentally locking myself inside the bedroom.”

Downstairs, the furniture that Bialecki custom designed for the sunroom gives Arts and Crafts design a modern twist; so does the sunroom’s stone fireplace, which he decked out with a whimsical mosaic of oceanic-hued tiles. Installing an updated HVAC system has allowed the couple to use the sunroom year round, and the sunroom in turn inspired a redesign for the kitchen/dining area. 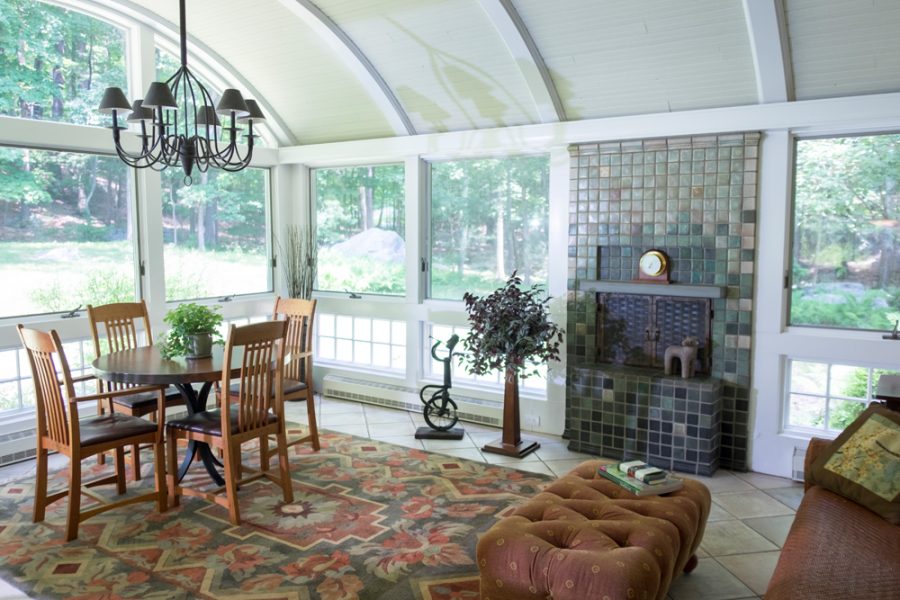 Like the sunroom, the kitchen and dining spaces employ floor-to-ceiling wraparound windows and soaring skylights to let the outdoors inside, along with an impressive amount of light. The kitchen, which had also been done in “modern industrial chic,” now boasts recessed wooden cabinets and counters accented with tiles in Mediterranean blues and greens, echoing the fireplace tiles in the sunroom. From the kitchen and dining area, the couple and their guests can savor the view of the 30-acre backyard, which runs into 70 acres protected by the Open Space Institute that stretch to the white cliffs of the Shawangunk Mountains and Minnewaska State Park. “We get lots of deer and turkeys and bears on the property,” says Seer. “Compared to downtown San Diego, it’s a lovely shock to the system.”

Reclining in a Stickley leather chair in the living room, Wallingford agrees, and adds simply, “We really like the look of the house and its coziness. It’s a really comfortable house for us to be in.” 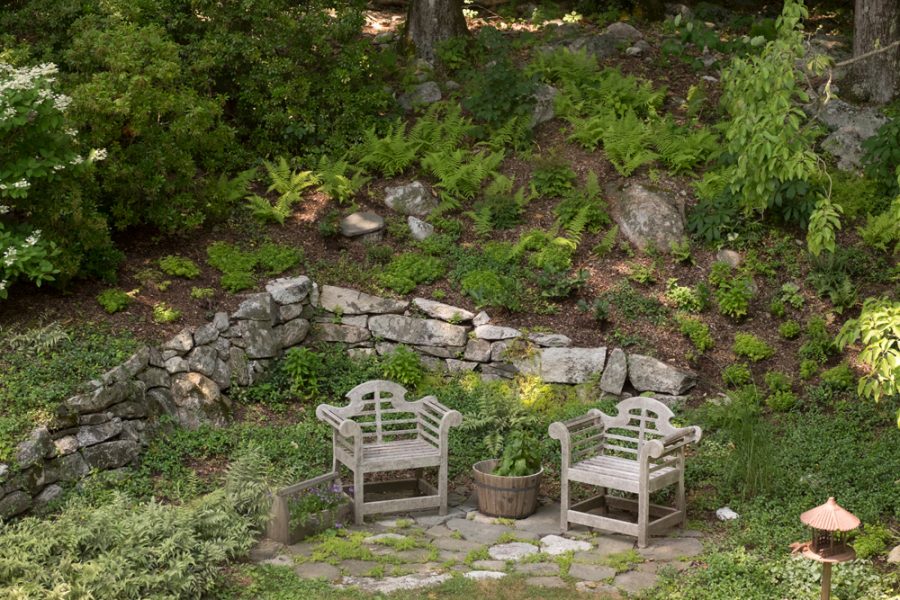