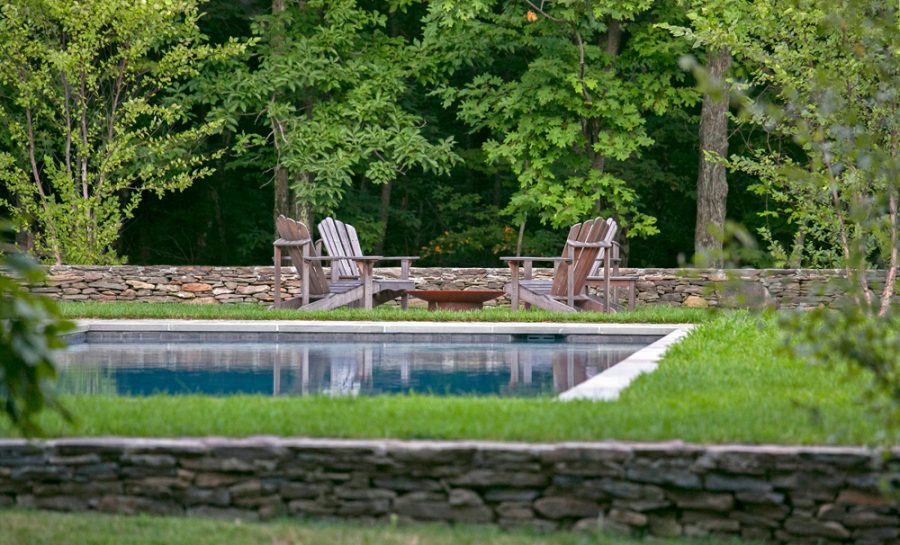 Coolabah Designs founder Emma O’Donnell’s world travels shaped her aesthetic. A native of Romania, she relocated with her family to Canada as a child. After attending university there, she pursued a career in human resources, living in Japan; traveling extensively in Australia, Europe, and Asia; and eventually settling in New York City with her Australian husband, Paul, who works in finance. “I consider myself a citizen of the world,” she says. Even before she became a designer, many of her friends and neighbors found her modern yet eclectic sense of style, which incorporates looks, items, and colors from around the world, so appealing that they asked her to decorate for them.

O’Donnell’s design career began with jewelry, which she made while working as a human resources executive at the international accounting firm Deloitte in New York City. She founded Coolabah Designs in 2007 as a jewelry brand. A year later, her husband’s job took her to London, and O’Donnell left the corporate world to sell her jewelry through a UK catalog and study interior design at KLC School of Design. In 2012, when the O’Donnells returned to Manhattan, Coolabah took on interior design projects.

The O’Donnells purchased an Energy Star-certified home in Milan, outside Rhinebeck, in 2007. The house had been built the year before by architect/builder David Borenstein, who specializes in Energy Star homes, which are at least 10 percent more efficient than homes built to code and achieve an average 20 percent improvement. For the couple, the house is a place in which to “decompress, play sports, or hang out together” on weekends, O’Donnell says, after busy weeks in Manhattan, where they live in Chelsea, where they raised their two sons.

Home Is a Hilltop

The 3,500-square-foot modern farmhouse, perched on a hilltop, catches the eye of the passing driver thanks to its bright red siding, which contrasts with the surrounding woodlands, shines bright in sunlight, and glows at dusk. The 10-acre property, which is approached by a long, unpaved, curving driveway, features a detached two-car garage, painted red to match the house, with bright blue doors.

The house is encircled by a wide, wraparound porch featuring dark green columns and unpainted wooden rocking chairs. Inside, the open first floor includes a farm-style kitchen; built-in bar; and cozy, casual living and dining areas. Last winter, O’Donnell redesigned the bar, kitchen, and upstairs master bathroom—all with an eye for sustainability and technology. (Next on the to-do list is installing solar panels on the roof, she notes.)

The refresh project began with refinishing the hardwood floors, painting the entire interior beige/gray, and installing energy-efficient LED lighting and Lutron energy-efficient dimmer switches throughout the house. “I love technology—a smart home is a must for me,” O’Donnell says.  “I want to control my lights, security system, and temperature from wherever I am.”

Family and guests tend to gravitate toward the kitchen, so O’Donnell updated the work areas to accommodate anyone wanting to pitch in. Two new sinks by Kohler and Houzer and two refrigerators maximize functionality. A round table and chairs, along with stools at the kitchen island, seat multiple guests. 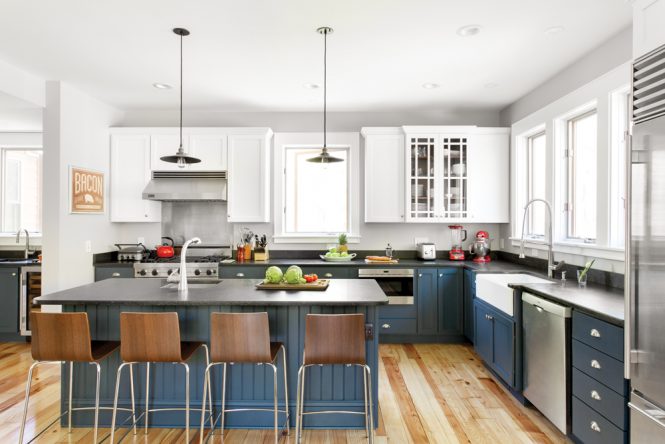 The kitchen area is designed as a gathering place, with an extra sink for family and friends to help out.

The kitchen has a fresh farmhouse look. Since the wooden Shaker cabinets were in excellent condition, O’Donnell simply painted the upper doors white and the lower ones bluish gray, a color that “comes up in the local vernacular,” she says, in bluestone and stormy skies. She kept the original, black matte granite counters, adding faucets by Grohe and pendant lighting by Restoration Hardware. The hardwood floors provide warmth and contrast, and red kitchen accessories add pops of color to connect the interior with the exterior.

Functionality was key to the redesign of the bar space. O’Donnell added shelving to the former wine storage area, which was expanded to also accommodate liquor, and installed two matching Sub-Zero fridges underneath the counter. 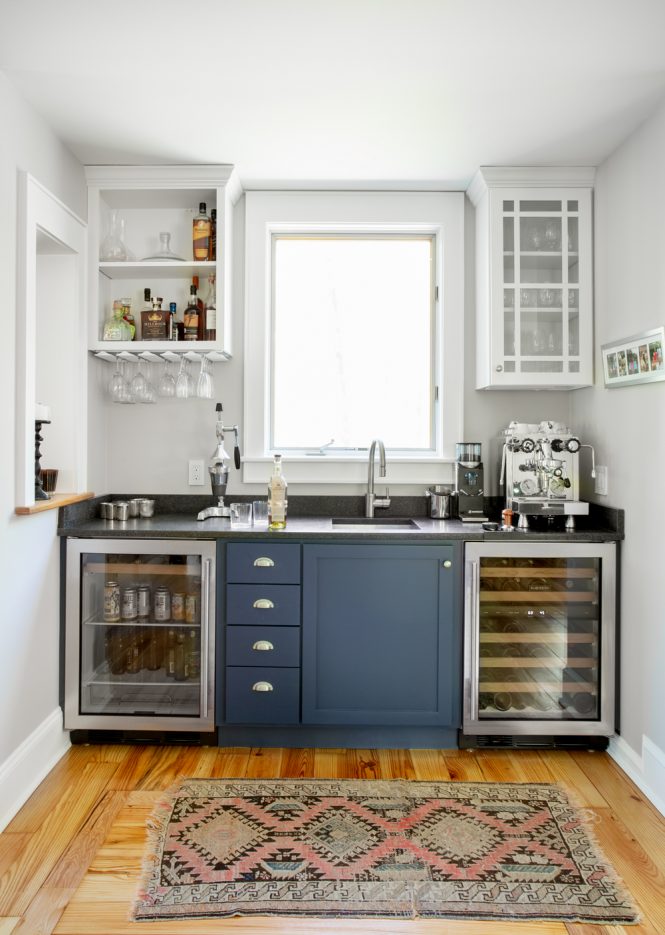 Throughout the house, a receding color scheme serves as a backdrop for O’Donnell’s wide-ranging art collection and mementos of her travels and family life. The works include Japanese woodblock prints, landscape photography, and paintings created by O’Donnell and her friends.

In the living area, built-in bookshelves serve as a focal point, creating a welcoming place to unwind with a book or a cocktail on the plush gray Michel sofa by B&B Italia. A shaggy Moroccan-inspired wool rug by West Elm and a wood-burning Shaker stove by Wittus add rustic flair. 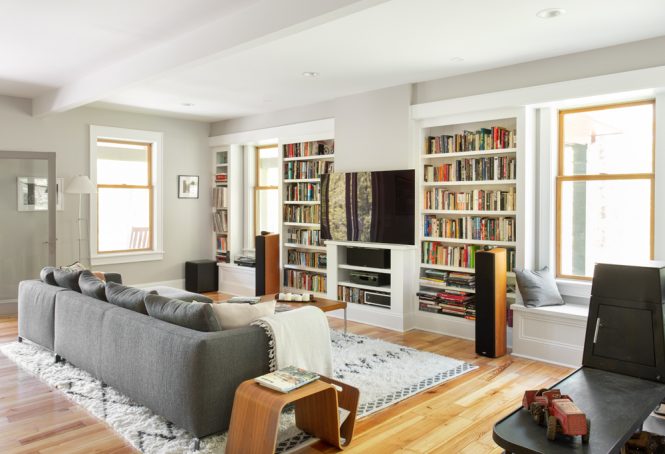 In the living area, built-in bookcases hold volumes along with art objects and travel mementos, forming an eye-catching backdrop.

A spiky, steel-colored chandelier in the dining area, from Hudson’s Ad Lib Gallery, soars above a walnut table by Ligne Roset, striking a dramatic note. The chairs were reupholstered in a soft tabasco hue with fabric from Romo Fabrics. Panoramic photos depicting the eastern beaches of Paul O’Donnell’s native Sydney, Australia, hang over the dining table. 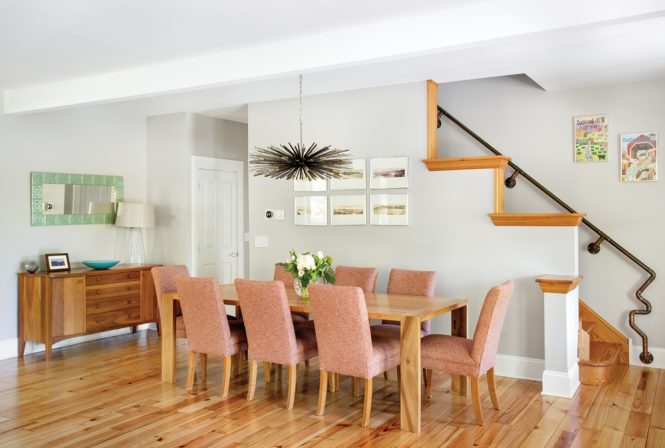 While the entire upper floor was repainted, only the master bathroom underwent a complete renovation. O’Donnell replaced the old, dark, brownish green tile with Dolomiti white marble to welcome the sunlight from the overhead skylight into the space, letting the white soaking tub below attention. To maximize space, she replaced the swinging door with a pocket door. The master bathroom’s marble floors, walls, and vanity top are from Artistic Tile in Manhattan.

Simplicity is key to the master bedroom’s design. Its white and gray walls contrast with splashes of red in the pillows and glossy lamps. For extra comfort, the large windows feature remote-controlled Lutron shades. “I always learn from every project I do, large or small,” says O’Donnell. “ln this instance, I learned to do something on a smaller budget and to direct our dollars towards the highest-impact areas, such as the master bedroom and the kitchen.”

All Around the House

Outside, O’Donnell transformed the yard. She tapped Ryan Manning of R Design Landscape Architects in nearby Millbrook for the terracing, which includes a hand-built stone barrier wall, and personally selected the plantings herself. Just off the back deck, lavender blooms wildly in contrast to the neatly trimmed lawn.

In the warmer months, the O’Donnells enjoy hosting guests outdoors, so the large, covered, wraparound porch doubles as a living space, thanks to a sectional sofa from Restoration Hardware and a large, extendable teak dining table. Just beyond the Gunite pool, sited parallel to the porch, is a rustic fire pit, surrounded by several Adirondack chairs.

Even though both their sons are now in college, the O’Donnells still head upstate often. “We have just become empty nesters, but my husband and I greatly enjoy the house, just the two of us,” says O’Donnell. “There’s much to do in terms of yard work, gardening, but also [there is] relaxing, swimming, and lounging, not to mention tennis and cycling—our hobbies. We do have dinner parties often and invite friends over for the weekend, so we are not really lonely. We had a barbecue for 14 adults and three kids last fall, so it’s been busy. Our kids come up for some time in the summer, all the major holidays, and some long weekends. We expect their interest to increase as they realize how special the house and the location are.”