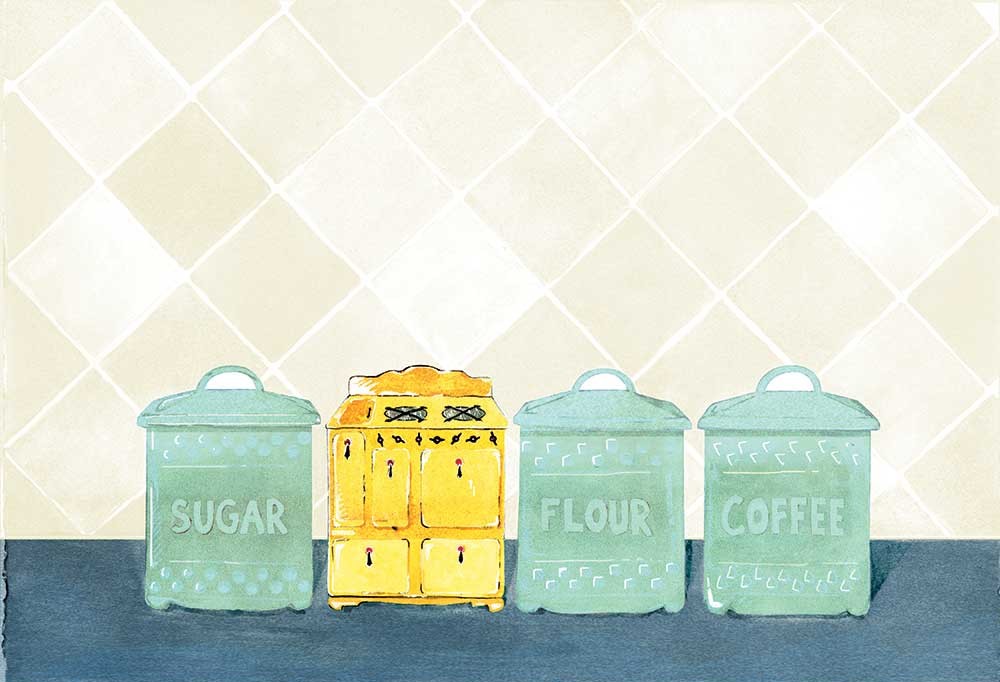 I have been accused of living in the past. The fact is, I sometimes wish I could. I love the detail craftsmen used to put into the houses they built, the pride they took in making sure that form and function worked together.

That may explain why I use a 1920 Singer treadle sewing machine. Why I whip cream with a red-handled, hand-cranked whisk. And why I own a 1954 Chambers stove that now dominates the kitchen of my 1970s ranch house.

The other reason is it’s just gorgeous.

You may be familiar with the daffodil-yellow Chambers ranges used by the ever-perky Rachel Ray. She bought that beauty at Zaborski’s in Kingston, I’m told, and it wasn’t cheap.

I found a real temptation of a stove on Craigslist: an absolutely gorgeous 1935 Wedgewood with a mother-in-law cover to hide the burners if your housekeeping was less than stellar. But I waited. I thought about it. I did some research. And I decided to let it pass for a very practical reason: it wasn’t going to be easy to find replacement parts for it.

Instead, I focused on vintage stoves that are more popular; the odds of my being able to get it repaired and find parts for it were a lot better.

I decided on a Chambers, an innovative machine in its day. Manufactured from 1912 to 1955, its claim to fame was its ability to “Cook with the gas off!” That was, in fact, its trademarked advertising slogan.

It works just like any other stove, but it can do much, much more. A Chambers is so heavily insulated that it’s designed to act like a slow cooker. Preheat it, cook for a short time in the oven or the Thermowell (more on that later) with the gas on, then turn the gas off and the heat is retained so well that the food continues to cook. It really works.

I found my Chambers on Craigslist: a 1948 beauty that had belonged to the owner’s mother. It had been sitting in his garage for years. I spent a couple of hundred dollars getting someone to pick it up and deliver it, thus saving myself thousands in chiropractor bills.

The stove sat my family room for about a year while I waited until I could remove a cabinet from the kitchen: It’s wider than an average modern range. I had only the seller’s word that it worked. I am lucky enough to know one of the best plumbers on the planet, who was willing to fiddle with the stove and spend time on the phone with Chambers restorers all over the country. Don’t ask me for his real name—I’ll call him Al, and, no, he doesn’t want to do it again. He hauled the Chambers into place and wire brushed the rusty burners, singeing his arm hair while adjusting the flames.

At day’s end, I had two working burners and an oven. The other two burners were too rusty and crusty to do the job. My relative practicality paid off. I found a place called the Old Appliance Club online, and they found me two restored burners for $125. I suspect if I’d gotten the Wedgewood, I’d be out of luck.

Our first meal cooked on the Chambers was spaghetti. I cooked the sauce on top of the stove. Our second functioning burner was the Thermowell, a deep well with an insulated lid and a special, locking sauce pot. The theory is that you boil the water, put your potatoes, noodles or other boiling-appropriate food item in the pot, lock it down, cover it up, then turn off the gas after 10 minutes. The Chambers cookbook I found online promised the food would cook “like magic!”

If you like your pasta starchy and not quite cooked, it was truly magical. Otherwise, I’d say the well and I have some work to do before we’re entirely comfortable together. That’s the sacrifice you make in exchange for true love.