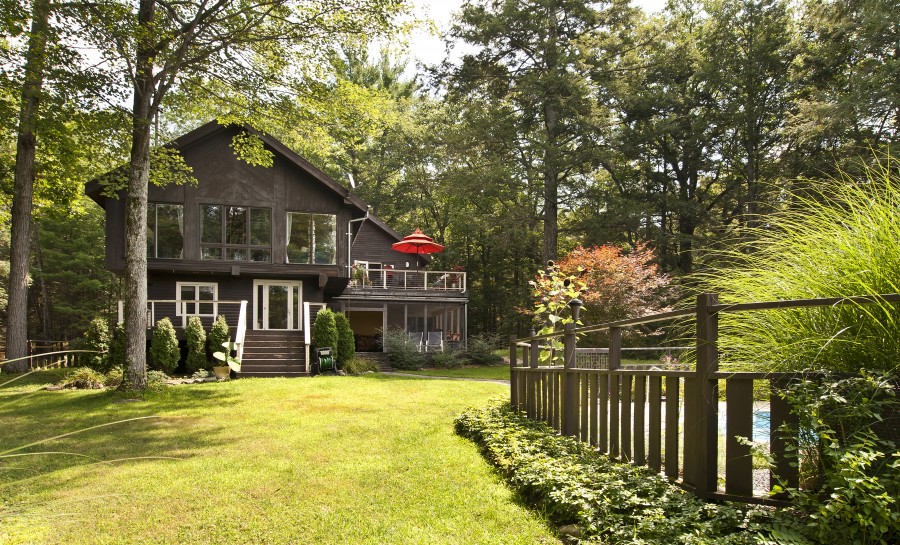 The owners of this Woodstock home call it their Eden, and it’s easy to see why. For starters, the house has played a crucial role in shaping its homeowners’ lives. For a decade, its quiet, secure setting at the end of a private road helped the homeowners, an artist and her husband, a best-selling writer and the creator/producer of a new cable TV series, nurture their talents. (In fact, it is because of the writer’s new West Coast cable TV venture that the couple has put the house on the market.) Here, within the couple’s Eden, their Rhodesian Ridgeback dogs cavort, and their active boys, ages six and 11, hike, ride dirt bikes, swim, and simply spend time outdoors.

“The view is great,” says the writer. “That’s unusual in the Catskills—when you’re in the mountains, often you cannot see the mountains—but we can.” The five-acre property backs up to thousands of acres of forever-wild land. “We’ll stand out on the deck and say good night to the moon and the stars,” he adds. “We still feel awe and amazement.” 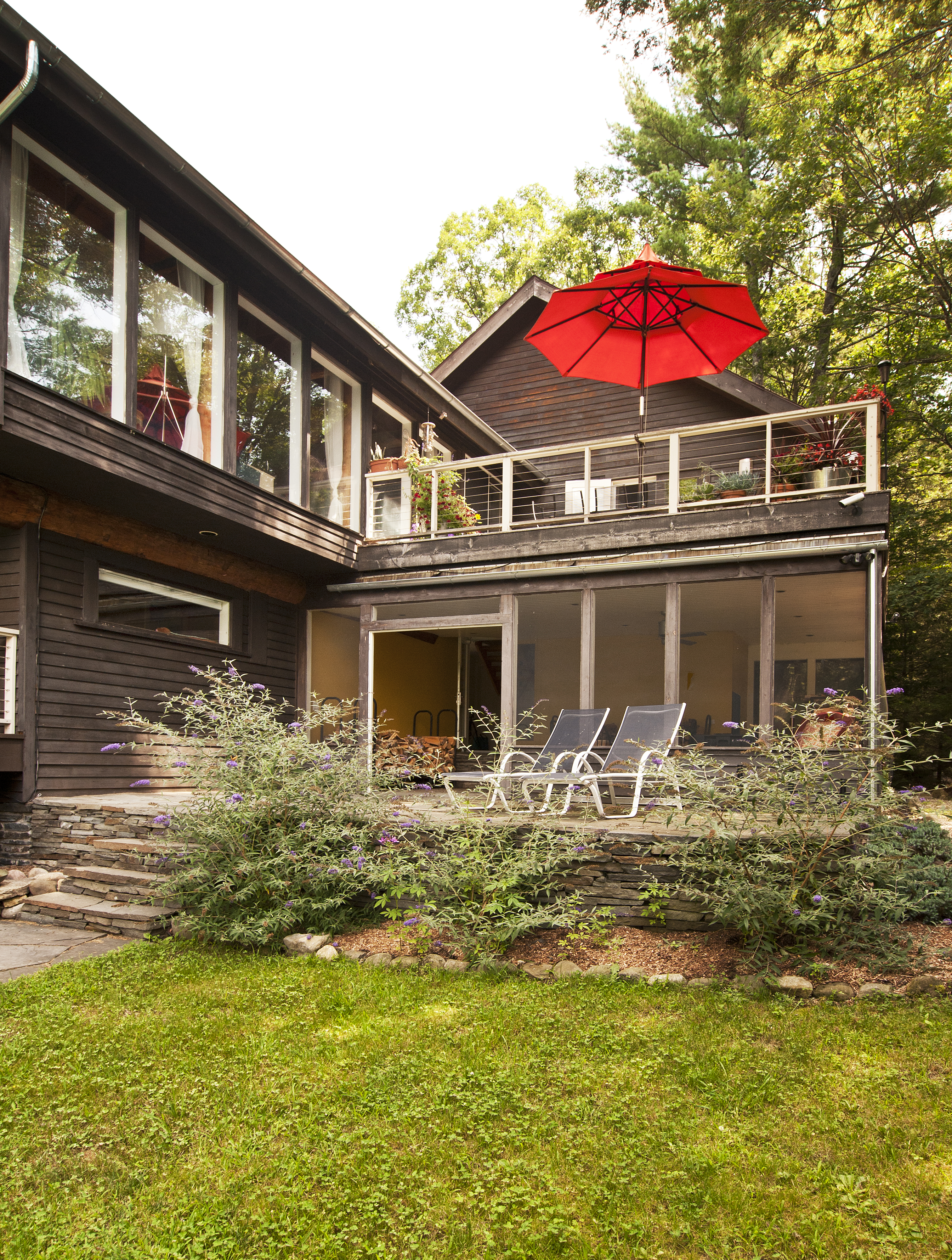 A heated saltwater pool, surrounded by a vegetable garden, was the first thing the couple added when they began a complete overhaul of the property in 2005. “One summer a squash plant grew up the umbrella base,” the writer recalls. The bulk of their focus, however, was on updating what was a plain-Jane house, a 2,410-square-foot split-level built in 1982. The renovation remains fresh 10 years later, thanks to what the writer calls his “crazy anal” design-forward approach. Rustic elements like hand-hewn barn beams, wide-plank floors, and a soapstone woodstove balance with sleek, contemporary finishes, including a Japanese soaking tub, stainless-steel appliances, and steel-cable staircase railings.

New casement windows and the addition of sliders changed the appearance of the house, which has four bedrooms and two and a half baths. The post-and-beam great room has 20-foot-high ceilings, and its two walls of expansive windows, letting in abundant light, framing remarkable vistas of mountains and sky, and providing a front-row seat to changing weather. “We feel like we’re in a snow globe on a winter’s day,” says the writer.

The house invites other simple pleasures, too. Library shelves throughout the great room, accessible by a rolling ladder, are well stocked with books. The cook’s kitchen is large enough for friends and family to gather comfortably. The master bedroom suite overlooking the pool opens to an upper deck for entertaining or solitary lounging. On the lower level, the screened-in indoor-outdoor room is large enough for dinner parties. Less visible but equally important upgrades to the house include new utilities, ductless air-conditioning, radiant heat, and an automatic whole-house generator. 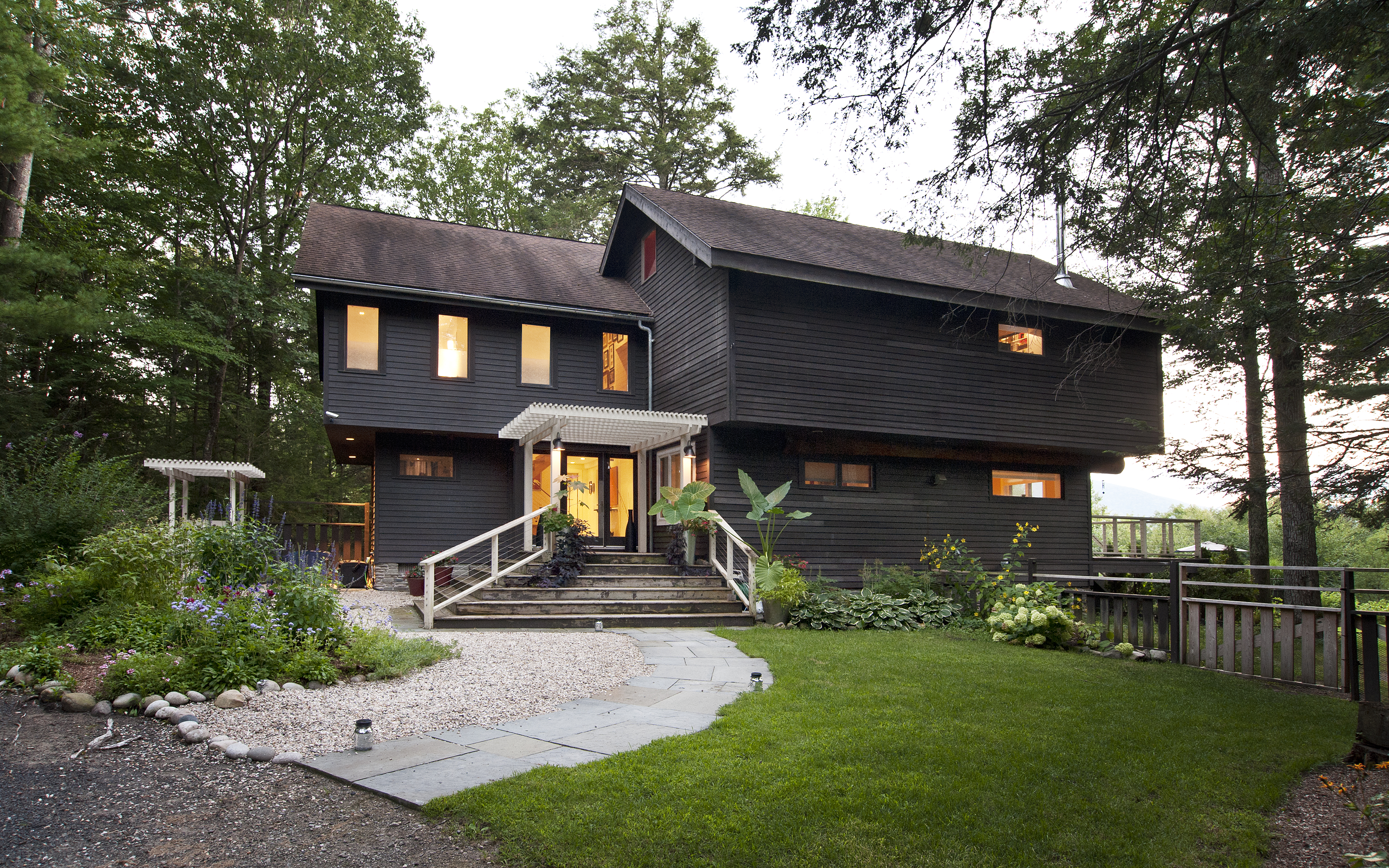 Being surrounded by so much nature has led to many magical moments for this young family. “We’re totally in love with this house,” says the writer. “You can’t hear a thing, can’t see a neighbor, yet I can ride my bike to my office in town in 15 minutes. If I could, I would add a rider to the purchase agreement for the new owner that requires them to have a dog.”