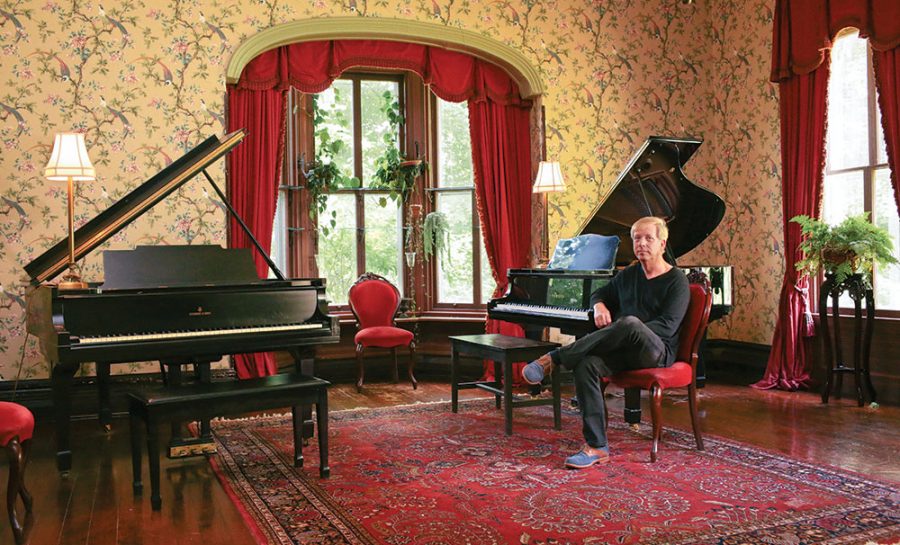 In 2002, when food and lifestyle blogger Kevin Lee Jacobs and his husband, presidential biographer Will Swift, were considering buying their 1826 Federal house in the village of Valatie, they noticed that the music room’s floor was slanted. The building inspector said that judging by the wallpaper, which had no tears, the 950-square-foot room had “settled as much as it ever will settle.”

But 10 years later, there was a tear in the Suzhou wallpaper (a style inspired by the famous Chinese garden city of Suzhou), the floorboards were separating, and the two sets of black walnut pocket doors weren’t closing. An architectural engineer advised rebuilding the foundation and lifting the room to make it level with the rest of the house.

“You haven’t lived until you’ve witnessed the initial jacking up of a 163-year-old room,” Jacobs later told the 360,000-plus readers of his popular blog, A Garden for the House. “Nerve-wracking doesn’t begin to describe it.”

The room was raised six inches. Jacobs was relieved when the pocket doors finally closed again, and the ornate ceiling plaster remained intact. He has yet to repair the almost imperceptible crack in the wallpaper, which depicts pheasants swooping about yew branches and red and cream chrysanthemums, but he found extra rolls of it in the attic.

The music room, which seats up to 60 people, is used for concerts and fundraisers for organizations like the Columbia County Historical Society and Albany Pro Musica, as well as political candidates. It is sparsely furnished to augment the acoustics, which Jacobs says “are better than Carnegie Hall.”

Permanent furnishings include two Victorian chairs, a Federal mahogany games table, a mahogany Victorian music cabinet, and a red Oriental rug that highlights the wallpaper’s red accents and the red velvet window, which were custom made, using 19th-century photographs of the room. Jacobs’ favorite architectural features are the mahogany fireplace and elaborately carved over-mantel mirror. To clean it, Jacob mounts a 6-foot stepladder, which makes him appreciate why the house once required 10 live-in servants.

Indeed, Jacobs’s blog was born out of trying to live in the house like people did in the 19th century, as well as years of developing recipes and creating gardens (he has four). But would he and Swift have still purchased the house if they had known that the music room foundation would require a new foundation? “Yes, absolutely,” says Jacobs. “We felt that it was our duty to save this long-neglected treasure, and to restore it to its former glory.” When asked if the music room is his favorite one, Jacobs responds the way a parent would, insisting that he loves all of the rooms “in equal measure,” and adds, “I feel spiritually connected to the house, like the house wants me here.”