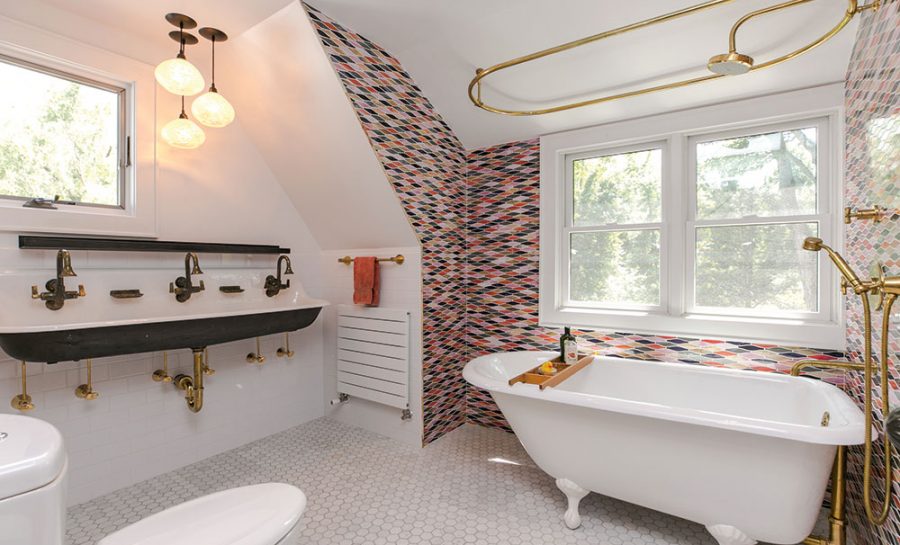 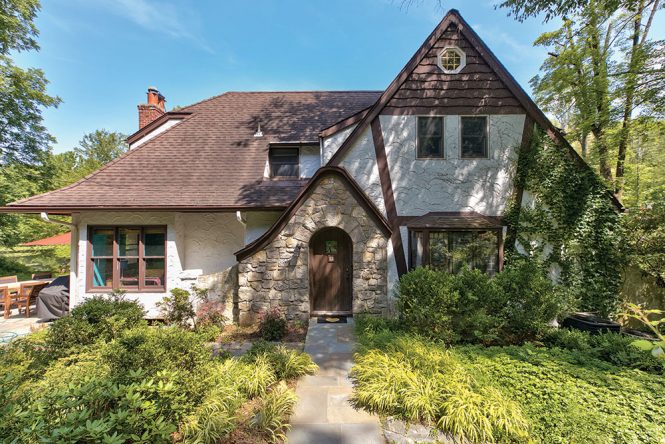 The edgy, modern interior designs contrast with the house’s traditional Tudor exterior. “We were fine that it was going to be kind of a mishmash,” says Dana Kraus.

When the Kraus family decided to renovate their house in 2014, they looked for a designer finely attuned to their tastes and needs. “We wanted somebody we really trusted, who wasn’t just a designer but was also familiar with the building process,” says Dana Kraus, a social worker-turned-homemaker. After seven years in their three-bedroom Tudor in Chappaqua, Kraus and her husband Mike, who owns a video production company in New York City, knew what they wanted for themselves and their three daughters (now ages 11, 9, and nearly 6).

They were looking for someone who would understood their high tolerance for unmatched, high-energy looks and their prime directive—letting natural light into the somewhat dark spaces. They turned to Beacon-based designer Elizabeth Strianese of Strianese + Pew, who worked on the project with Chappaqua architect Mark Le Page of Five Cat Studio. Home Enrichment Company, a firm of artisan craftsmen and master carpenters based in Hopewell Junction, who take on high-end renovation projects, was hired to complete the entire project: demolition, framing, sheetrock, fine carpentry, painting, tiling, electrical, plumbing, and HVAC.

“Dana trusted me enough at that point, and knew I understood ‘quirky,’” Strianese says. “She is so funky, fun, and a total free spirit, and she thought I was just zany enough to think outside the box for her.” 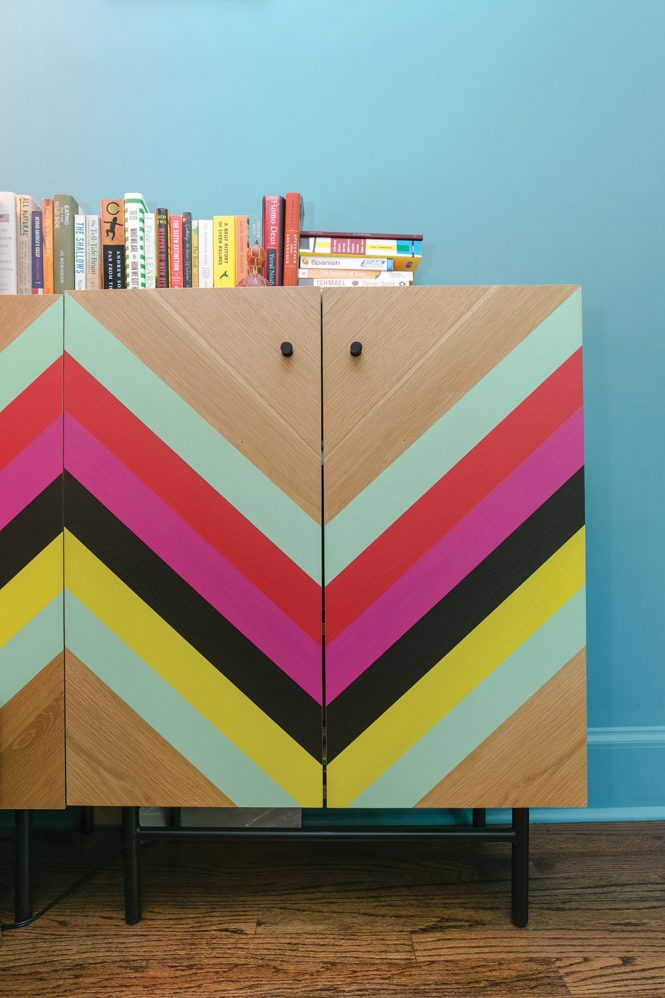 But as adventurous as Kraus is, even she hesitated about a kitchen where wildly swirly marble countertops converge with colorfully painted tile and grainy wood. “I cook a lot—it used to be for enjoyment,” Kraus says. “Now I have to cook [for my family]—and sometimes I still enjoy it—so I knew I didn’t want a plain white kitchen. I wanted something that I wouldn’t get bored with because I spend a lot of time standing there. It was a bit of a leap of faith, putting all these patterns together. In the end, we went for it. I don’t know if it’s for everybody, but it is for me.”

“They wanted something that hadn’t been seen and done before,” Strianese says. That spirit prevailed throughout the redesign, which included a deck and a 100-square-foot addition to the kitchen, plus taking out the wall between the kitchen and dining room.

Jazzing up the rest of the kitchen was a welcome challenge. The Krauses had seen Strianese’s signature style—maximizing natural texture and working with Home Enrichment Company for a handmade vibe—in her design for The Roundhouse, a wedding venue, hotel, and restaurant in Beacon. She put this aesthetic to work for the Krauses. “For the kitchen cabinets, I had this idea of using the walnut with the sap wood on it,” she says. “Most people plane off the lighter exterior parts of the tree to get the warm, natural brown walnut is known for, but I think it’s beautiful; it’s like a natural ombré.” 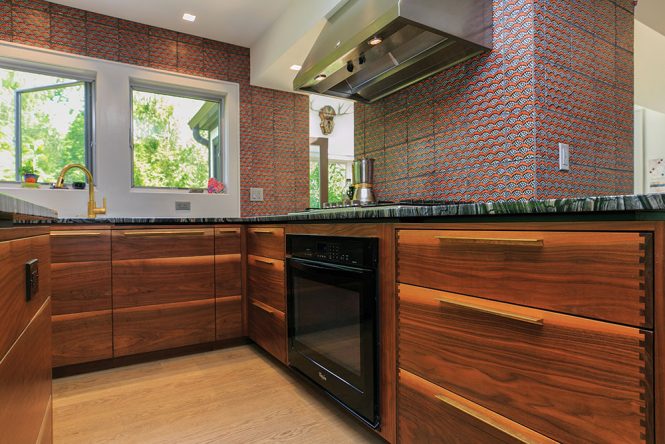 In the kitchen, walnut cabinets by Mike Delnero of Delnero Custom Furniture show off their dovetail joints and lighter sap wood.

The next unconventional idea: Dovetail joints are usually hidden inside cabinetry. “I thought, it’s kind of beautiful; there’s no need to hide it,” says Kraus. So dovetailing is a decorative element on the kitchen drawers. The appliances were chosen for functionality rather than prestige. “While Dana is an awesome cook, she’s not someone who needs the showpieces,” Strianese says. “She just wants a really good range that cooks well and has great reviews—but it doesn’t have to be all about the name brand.” The simple lights from Beacon-based Niche Modern, utilizing Edison-style light bulbs, add a pop of color to the room.

In the kitchen, walnut cabinets by Mike Delnero of Fort Plains-based Delnero Fine Furniture Company, who worked with Home Enrichment Company, show off their dovetail joints and lighter sap wood.

For the kids’ bathroom (formerly the laundry room), Kraus says, “We wanted to do something that wasn’t going to get boring to them as they grew up. It’s comfortable for them as kids, but they can appreciate it as teens, and we like it as adults.” The bathroom fixtures and the hardware throughout the house are unlacquered brass. 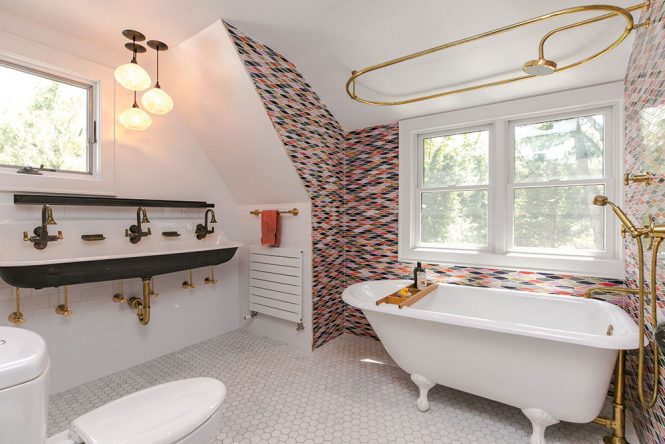 The tile used in the girls’ bathroom, which features a triple-sized sink, was originally meant to be a manufacturer sample showing all possible colors, but the family liked the bright mix of hues.

“This was in line with [Dana’s] thinking about the genuineness and realness of materials,” Strianese says. “She chose this finish knowing it will patina over time. But that’s fine—that makes it much more real.” The laundry sink in the kids’ bathroom and the cast brass faucets are as durable as they are inexpensive ($30 each, says Strianese). There’s a triple sink to accommodate the three girls at once. The rainbow glass tiles are custom made, and so are the swirly, hand-blown glass lights, made by the Hudson Valley’s Ten Willow Studio.

The main bathroom was renovated to keep its pipe work visible, “which the plumbers [at Home Enrichment Company] were freaking out about,” Kraus says, “but I liked the idea of seeing how things work: ‘This is where your water is coming from.’ It puts us in touch with how the house is working.” Using pipes as design elements makes for “a cool look,” Strianese says. “You can see the welds where they’re soldered together. We paired that with a custom-made, modern, super-square cube sink on a walnut vanity.” The graphic pinwheel tile is balanced by plain, white subway tile. 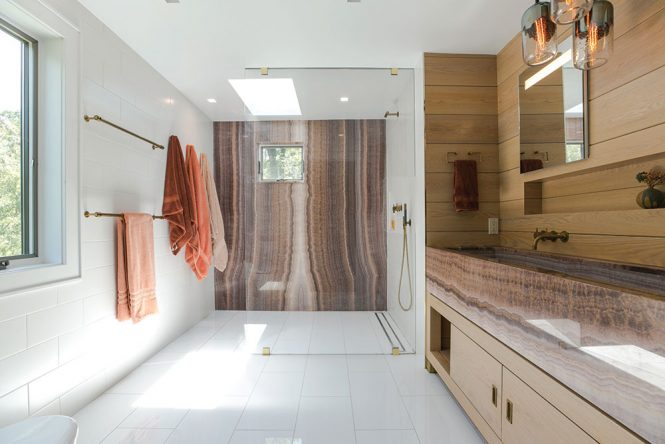 The master bathroom is a textured, earthy mix of tile, wood, and stone (meant to look like onyx).

In the master bathroom, the faucets are by the Swedish company Vola, not the priciest, but “the pinnacle of design and utility,” Strianese says. The trough sink is meant to look like carved onyx; bleached white oak is used as a backsplash that rises all the way to the ceiling. A small, wood-lined recess makes up for the narrow sink ledge. The bubble glass and metallic Niche Modern lights are a custom design Strianese commissioned for The Roundhouse.

“What Liz was able to do was help us figure out how to indulge that desire for something really eye-catching and quirky—and maybe a little out of our budget—and to make that happen,” Kraus says. “That was a balancing act, and she was able to do that. There’s a balance to the crazy, which also allowed us to afford the crazy.” Rather than continue the kitchen marble up the wall, the Krauses chose less expensive tile that worked with the stone. They added a magnetic blackboard wall in the area between the kitchen and the family room, creating a budget centerpiece. In the guest room, the chevron cabinets look custom but are from CB2. “We wanted something fun and not so precious,” says Kraus. “That makes the room not boring.” 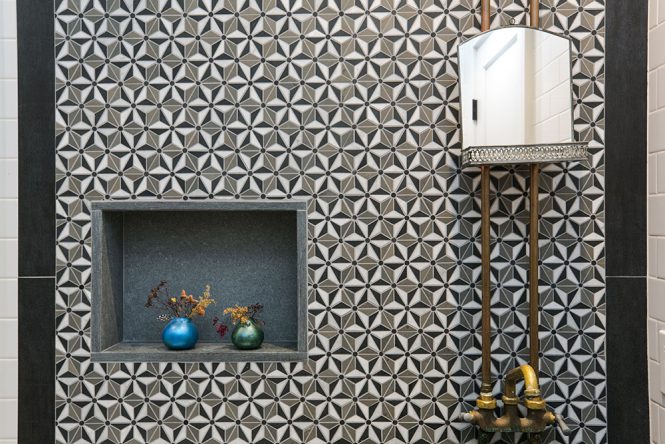 Exposed pipes can be used as a design element, though your plumber may need some convincing

“Each space was designed independently and we were able to indulge our different kinds of beautiful,” Kraus says. “They don’t have to go together. We like that. Everything doesn’t have to be fabulous. Some things are not so easy to find and cost more, and you have to pull back a little bit. Liz was able to do that without us feeling like we missed out.”