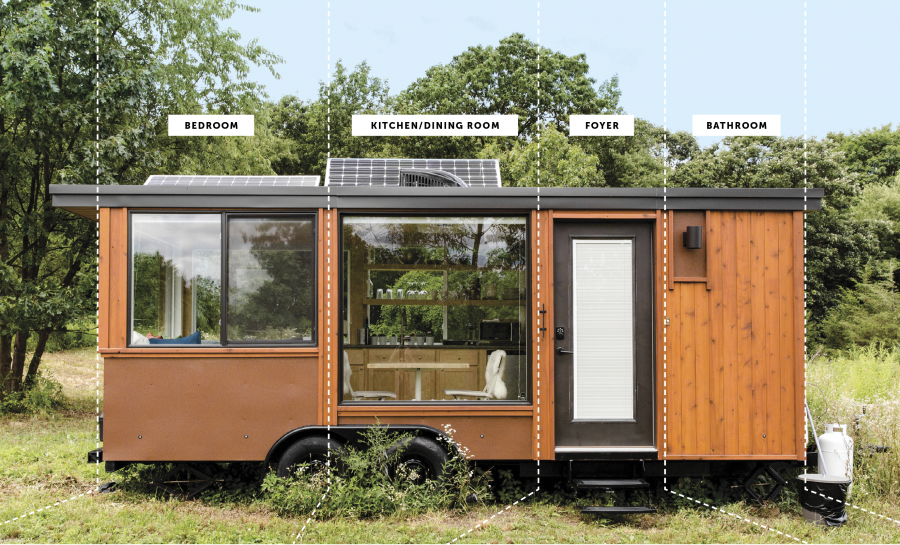 Good things come in small packages, it’s been said. That philosophy is at the core of the current tiny house movement, whose followers—motivated by economic and environmental concerns and a search for simplicity—are radically downsizing their living spaces. In response, several manufacturers are offering space-efficient prefab homes in a variety of styles and—yes, tiny— sizes. The “tiny” part is no exaggeration: These diminutive structures range from 100 to 400 square feet, as opposed to the average American home, which is about 2,600 square feet. But going small can be a big leap, so perhaps the best way to get a true taste of the tiny-house lifestyle is to spend a night or a weekend in one of these bite-sized buildings. 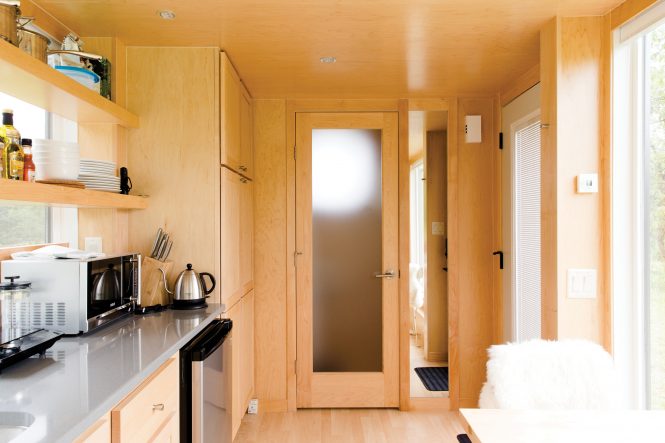 “A lot of people may not be ready to give up their regular-sized home full time, and this place gives them a chance to try out that fantasy of a simpler life,” says Seth Porges, a journalist and TV presenter who divides his time between Beacon and Brooklyn and owns and operates a tiny house as a getaway retreat in the Ulster County hamlet of Marlboro. “But mainly it’s a great way for people who live in the city to relax and recharge in a really beautiful spot. And, at 180 square feet, it’s about the same size as a lot of New York apartments, so that part might not really even be that much of an adjustment for most people who come up from the city.”

Last April, Porges opened the Glass House, which has an abundance of windows despite its compact size. The towable, cottage-style structure, built by the Wisconsin company ESCAPE Homes, sits on 30 acres of farmland. The aptly named house’s windows offer glorious, three-sided panoramic views of the distant Shawangunk Mountains and the farm’s open fields, old horse stables, and even a functioning chicken coop. Guests can gather eggs to prepare for breakfast using the induction cooktop in the Glass House’s fully-equipped modern kitchen, which has a table and two chairs, while deep shelves above the stainless-steel sink hold dishes and cookware. 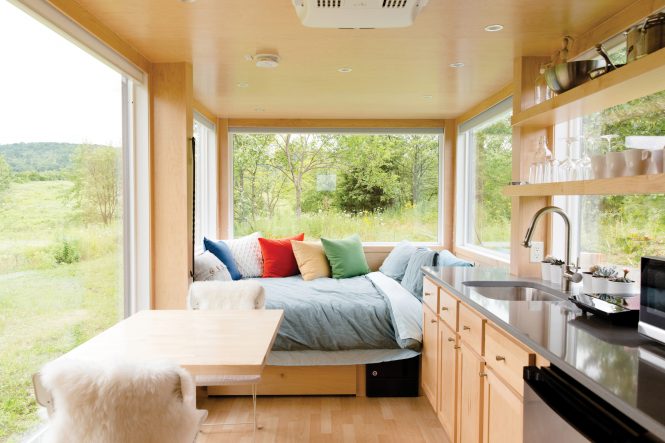 The cedar-sided, solar-powered house’s other appointments include propane HVAC heating and air conditioning, WiFi, and a shower, microwave oven, electric kettle, and dry-flush toilet (the same type used by Matt Damon in The Martian). Outside, there’s a picnic table and outdoor furniture surrounding a fire pit for nighttime hangs. 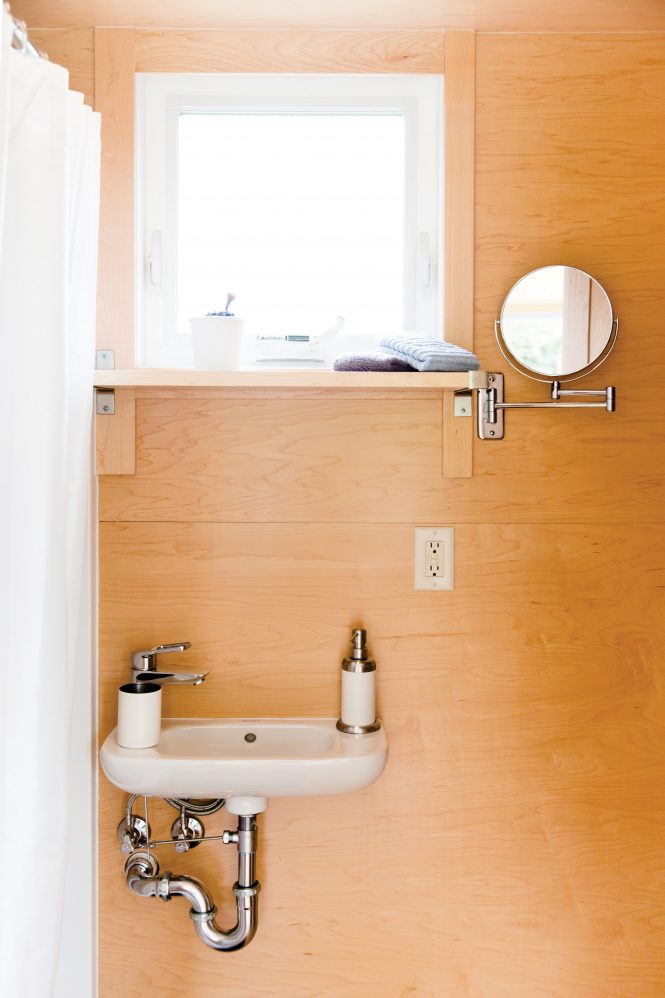 A friend of Porges owns the farm. Porges initially considered yurts and repurposed shipping containers for the rental dwelling, but he was knocked out by ESCAPE’s Traveler model—and promptly ordered one in February.

The unit’s clean-lined, pine-and-maple interior and astoundingly efficient use of space were key points. “It’s small, but it feels really big,” Porges says. “There’s a surprising amount of hidden storage, and the whole inside is really nice. It’s basically a cabin in the country, but it’s not ‘roughing it’ at all.” 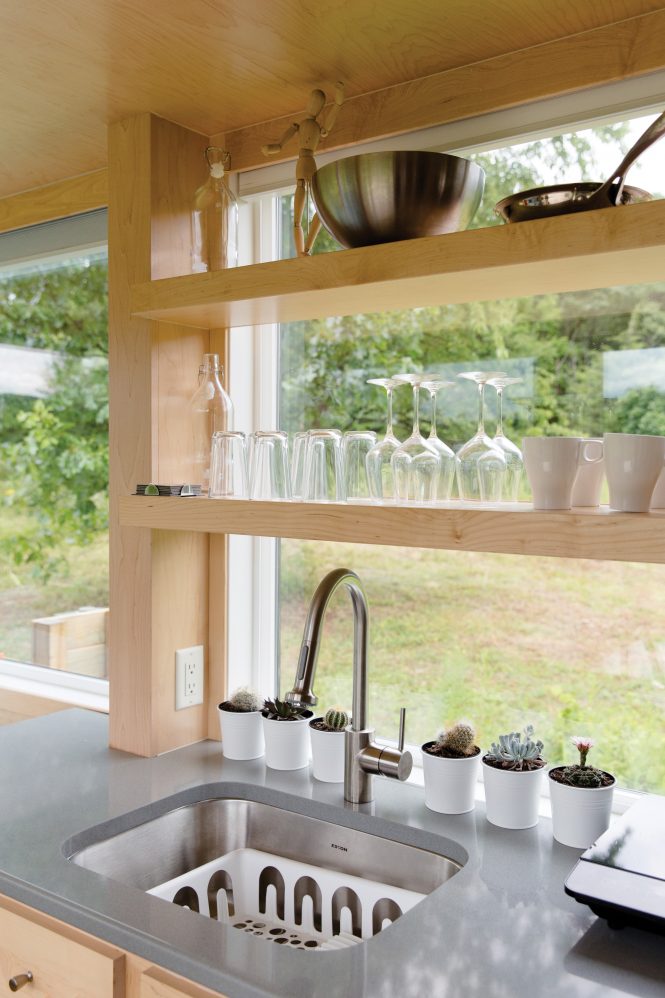 There is, however, one amenity guests won’t find in the Glass House. Although ESCAPE offers the option of a hideaway TV, Porges decided to forgo that feature. “Of course, they can still stream video on their laptops if they want to,” he says. “But when they’re lying there on a quiet night in the [queen-sized] bed, staring up at the stars all around them, they really won’t miss TV at all.”

The Glass House, located in Marlboro, is available for rent on Airbnb.