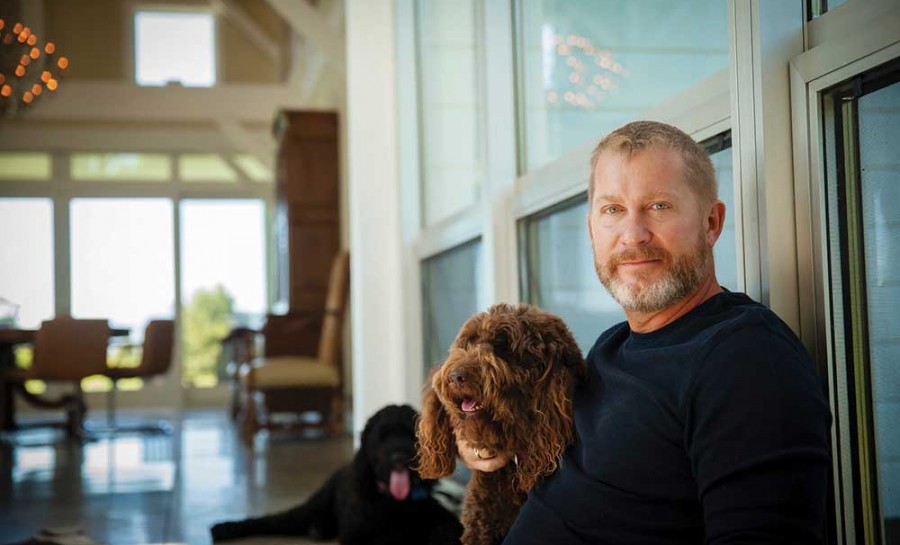 The words “eco-friendly house” can conjure up visions of hand-hewn, humble little joints, places where design and comfort might be sacrificed in the name of green. Yet Bill Ross and John Longman have managed to create the opposite: a massive, artful, and contemporary home that is as green as it is chic.

Since Ross and Longman met at an Upper West Side bar 25 years ago, they have shared many homes: a third-floor walk-up in Astoria; a brownstone and then a loft condo in Hoboken; and an A-frame in Rhinebeck. Each place had its charms and its limitations, but when it came time for the couple to build their dream house, they didn’t hold back. Their modern incarnation of a farmhouse measures 7,000 square feet, is complemented by 2,000 square feet of decks and porches, and is sited on 30 acres of a former apple orchard. The pair dubbed their compound Three Fields.

The decision to hew to green technology was both environmental and financial, with a prudent eye toward resale. The massive house is warmed by geothermal heat, which uses the earth’s temperature to heat or cool a home. The system, centered in six four-hundred-fifty-foot-deep wells drilled into the front yard, avoids the pitfalls of oil heat and uses hot water more efficiently. 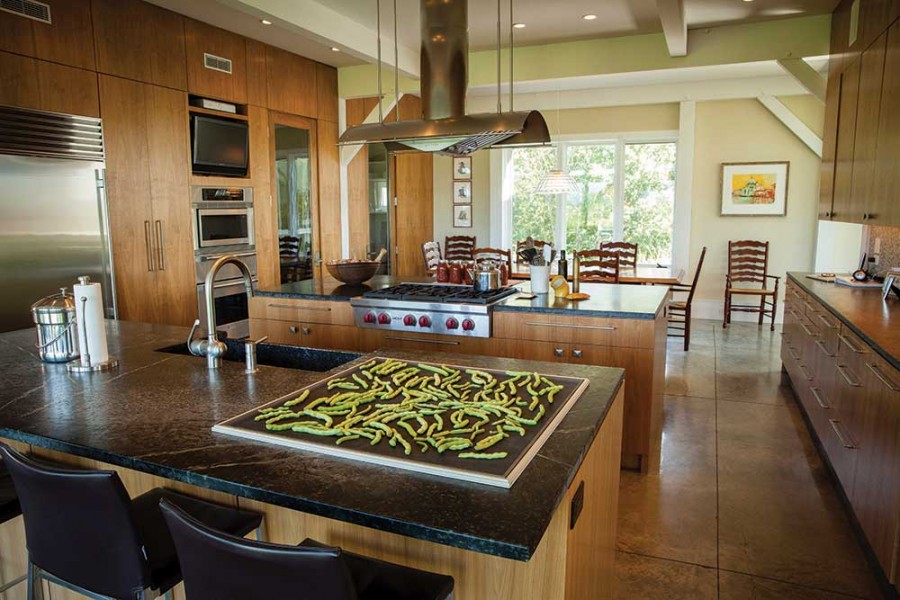 “You cannot possibly build a 7,000-square-foot house in this day and age and have it run on propane,” says Ross. “It would cost a fortune.” Conventional heating would run at least $2,000 a month in winter, he says, and adding that geothermal after construction would cost them, or the next owners, some $40,000.

Because geothermal heating was relatively untested in the area and unfamiliar to the contractor from Stewart Heating & Plumbing when Ross and Longman had the system installed, the contractor erred on the side of excess and fitted the house with three heat pumps. This afforded Three Fields more than enough heat for the house; it could eventually heat both the pool and hot tub adjacent to the front porch and cool the house through the cement-slab floors, rather than through forced air, as they currently do. (A 1,000-gallon propane tank, primarily used for cooking, is refilled once annually.) “It’s nice to have the future options to expand the use of the system and grow even greener,” says Ross.

Geothermal isn’t the only heating system. The concrete floors offer radiant heat, which Ross, a stage performer, first encountered on a theater tour in Japan. The house’s massive, custom-made windows push the interior temperature to the 80s on sunny days, even in winter, allowing Ross to walk around in a T-shirt and shorts. The master bedroom roof has been set up for solar panels, should installation costs for them become more affordable. 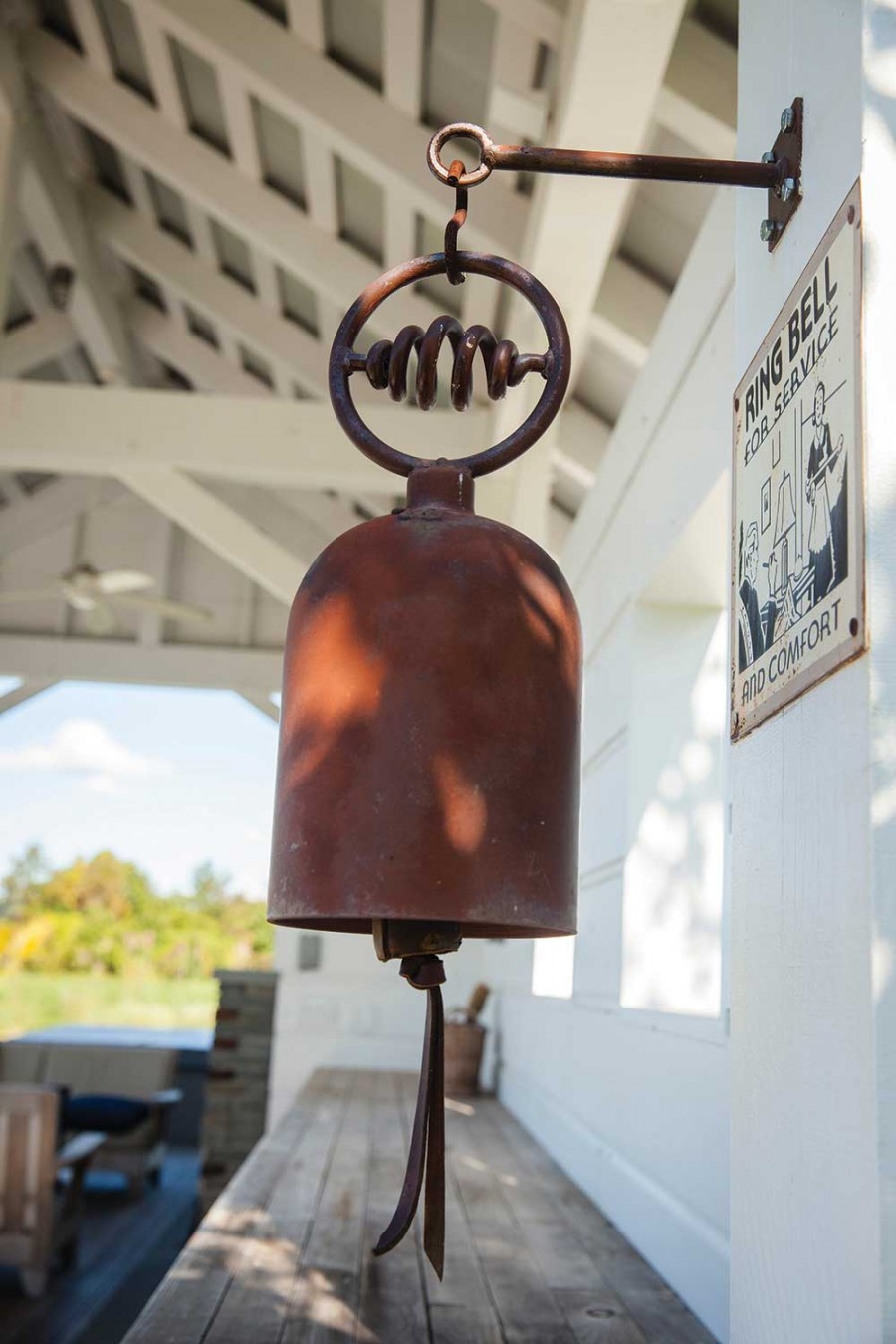 Ross and Longman had originally come to Rhinebeck in 2000 looking for a weekend home after Longman, a long-time acoustical engineer, had soundproofed private dog kennels in the area. For several years, they lived in a 2,700-square-foot 1960s A-frame on four acres in Rhinebeck, which eventually felt too small for weekend guests, even after they upgraded and expanded.

Their friend and architect, Sean Miller, invited them to tour a property in Clermont where he was planning to build and sell a house on spec. A former apple orchard, the area had long ago gone to seed. The weeds, Ross recalls, were almost six feet tall. The couple was not interested until they saw it the next spring, when the A-frame was feeling extra cramped and the apple trees at Three Fields were in blossom. Ross turned to Longman and declared, “Okay, I like this.”

Three Fields was designed with numerous rural accents, its silhouette cleverly suggesting a farmhouse. “We were very sensitive to the fact that we are in an area that’s [dominated by] family farms,” Ross says. “So, even though we wanted a modern house, from a distance we wanted it to look like it belonged in the neighborhood. We didn’t want some giant glass cube on a hill.” Rather, the house, which has five bedrooms, four full baths, and two half baths, was inspired by the restaurant Blue Hill at Stone Barns: country, but with high chic factor. It includes marble countertops, a screening room, and a 1,500-bottle-capacity wine room.

Theater veteran Ross took an active role in the creation of Three Fields, approaching the challenge as if he were building a stage set; Ross has stacks of binders filled with sketches, notes, measurements, and historic references recording every idea, however briefly entertained, in the creation and furnishing of the house.

The lessons learned from residential life in Astoria, Hoboken, and Rhinebeck were applied to Three Fields. After feeling boxed in by their three-floor Hoboken brownstone, the couple agreed that an open-floor plan was best. “I’m a huge person about flow,” Ross says. “I don’t like dead ends in a house.” Working with Miller and Longman, Ross created a silo-like tower feature, “a three-story breezeway” that connects the master bedroom to the rest of the house.

The couple chose post-and-beam construction, bypassing the need for steel girders for the sprawling structure and hewing more closely to their farmhouse vision. Despite objections from contractors, Ross elected to paint the house frame white. “[Painting] took it from being a barn to a modern architecture. You stopped looking at all the wood and started looking at the shape.”

The stone at the front door extends into the foyer in a wrap-around style, a nod to the Tokyo home where Ross lived while on tour in the 1980s. “When you come into a Japanese [foyer], you’re still considered to be outside,” he says. “It’s not until you take off your shoes and put them in a closet and step up into the house that you are [considered to be] in the house.”

The decor of the house reflects the melding of their individual styles. Ross comes from Columbia, South Carolina, and Longman hails from the Surrey section of London. Select items from all their previous homes, including the Mediterranean accents obtained from vacations abroad for the Hoboken loft, survived the massive furniture culling and are scattered throughout the home, meshed with new finds from places like tony Domus Design on the Upper East Side. They graduated from the antique decor of the brownstone—a style Ross now calls “old-lady, Victorian crap”—to a predominantly mid-century modern style.

The four guest rooms of Three Fields offer a combination of styles: country bed and breakfast meets boutique hotel. The sleeping and sitting areas are filled with chic flea market finds, complemented by furniture and baubles from Ross family members dating back four Southern generations. On walls and in corners, colorful details offer the design equivalent of a knowing wink, like the glass bottle of buttons on the dresser from Ross’s grandmother, or the antique Flexible Flyer sled anchored to the wall. The en suite bathrooms offer a sleek counterpoint to the farmhouse feel with modern sinks, elegant tiling, and sleek shower fixtures. The setting of the master bathroom takes full advantage of the house’s removed location, where the road to the house winds a half mile through woods; the shower gives out onto the front field with a view of the mountains, allowing al fresco bathing without neighborly interference. 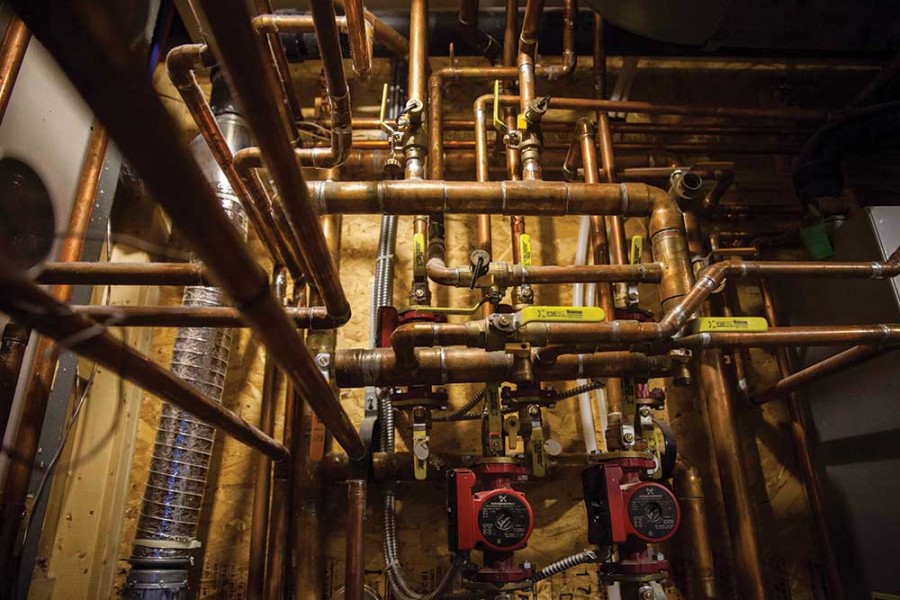 As a nod to his show-business background (he presently directs and stars in numerous productions at the Rhinebeck Center for the Performing Arts), Ross programmed the 200 lighting sources throughout the house on a computerized system so they illuminate in unison, providing “a theatrical effect at night.”

As the sole full-time resident of Three Fields, Ross is also its caretaker, house cleaner, and gardener. “I like the overgrown, English garden look,” he says. It’s a trade-off enacted with Longman for not having a full-time job. (During the week, Longman occupies an 800-square-foot Hoboken pied-aterre; he is currently working on the high-profile Hudson Yards project).

Between housekeeping, theater work (he recently played the king in “Spamalot”), and new duties as at-home office manager for Longman’s company, Ross finds little opportunity for downtime. However, when unwinding is crucial, he heads to the basement screening room and curls up on a couch in front of the eight-by-twelve-foot screen to watch a sci-fi blockbuster.

Despite its numerous elegant touches, Three Fields is not a stuffy showcase home, its owners insist. Ross sees it as “a beach house in the country” where children and dogs are welcome to run and tumble about with full-time canine residents Lylah and Obi. “It’s meant to be lived in,” he says.