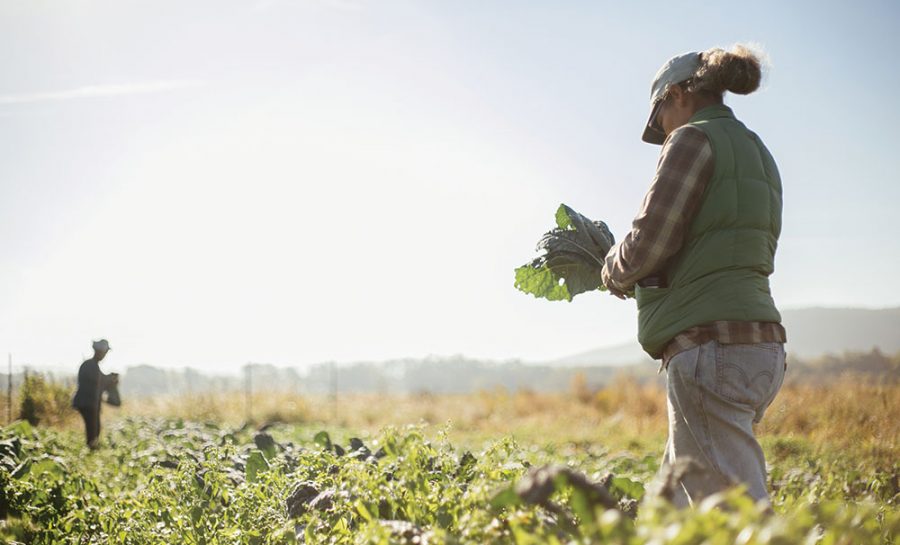 They don’t look like the pictures that pop up if you Google “farm family,” but the four women who are co-owners and co-farmers of Rise & Root Farm—two gay, two straight, two black, two white, ranging in age from mid-30s to early 60s—have found a lively, lovely nest in the black-dirt soil of Orange County. At their home base in the town of Chester they have now completed two sustainably grown harvests and erected a greenhouse, and they are proceeding with their work in food sovereignty activism, playing tag team with chores as they commute to city gigs like lectures and classes, hosting events for their city pals on the farm.

“We’re an intergenerational farm, we’re gay and we’re straight, we’re black and we’re white,” Hayes told Erbentraut. “So we have all these difficult conversations about social structures and who has access to what and how. This [minority farmers movement] is an opportunity to move the United States agricultural movement in a more representational, beneficial direction.”

That direction is a familiar one for Hayes, Hodge, Clevenger, and Washington, as it was a dominant force in all of their lives. The four met over the course of the last 10 years through nonprofit food justice organization JustFood NYC. In 2010, they began planning to farm together, and in 2012, all four trained at Grow NYC’s Farm Beginnings Whole Farm Planning program. Their three-acre parcel, which they ultimately expect to scale up to 25 acres, was acquired in 2013 through the Chester Agricultural Center, a project of Northeast Farm Access LLC, which “brings together farmers and social investors to revive and transform sustainable agriculture,” according to the organization’s website.

A successful crowdfunding campaign raised $55,142 for Rise & Root’s startup expenses in spring 2015. In November, a second Indiegogo campaign was 100 percent funded for converting an old barn near the farm into a commercial kitchen in which Hayes will produce pickles, krauts, jams, dried herbs, herb salts, and sauces for Crock & Jar, as well as host more classes and events.

In the farm’s early planning phases, the team set a goal of having produce at market by 2015. And there they were, at Union Square Greenmarket and La Familia Verde in the Bronx as well as at Chester’s local farm market, with heirloom tomatoes, collards, kale, ginger, potatoes, herbs, and edible flowers. Sales to city restaurants, including Hayes’s old haunt, the Gramercy Tavern, are proceeding nicely, and Hayes says higher-end chefs are particularly fond of edible flowers.

“Starting a farm and leaving a full-time job with benefits is scary,” Clevenger said in a keynote address to the members of JustFood NYC last April. She now farms full time after having been an assistant garden manager and educator/mentor at the UC-Santa Cruz program for two years. But she admits that the farming itself—which for her means “getting my hands in the soil, nurturing plants, watching them grow, and then being at the farmers’ market, and watching people walk away with healthy produce I grew with my own hands”—is as amazing as it is challenging.

Clevenger told the JustFood NYC crowd that she’d grown up as the only African American in most places she’d lived in rural Missouri, watching as family farms failed around her, never connecting the image of “farmer” with someone who looked like her. She moved to New York in 2001, joined JustFood NYC as an administrative assistant in 2007, and met Washington, who had already been nicknamed the Queen of Urban Ag. “I never imagined that I would be a farmer,” Clevenger says. “And it is one of the experiences that has touched my life the most, has created opportunities to heal my own childhood experiences, and has helped me connect with who I am as a black woman in this country.” 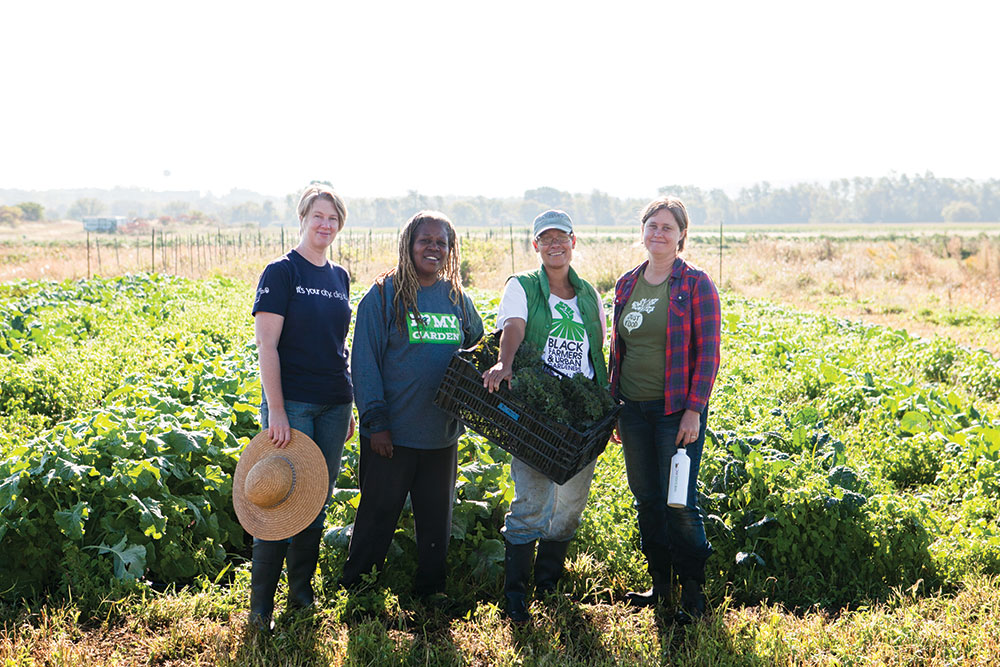 Hodge, who is originally from New Jersey and has worked at farms in Wappingers Falls, Staten Island, and Kinderhook, is the only one on the team with prior rural growing experience. For her, farming is “an act of defiance, an act of love,” as she tells it in the preview clip for Rise, Root, Revolution, a documentary about the farm currently under way by filmmaker Kate Walker. Hodge holds a bachelor’s degree from the University of Richmond in leadership studies with a concentration in environmental leadership and social movements. Like her three fellow farmers, she can recite chapter and verse of the connection between social justice and food sovereignty, defined at the Forum for Food Sovereignty held in Mali in 2007 as the right of all humans to “safe, nutritious, and culturally appropriate food and to food-producing resources and the ability to sustain themselves and their societies.”

It’s a right that has slipped away from a great many people, and the women behind Rise & Root have found a warm reception in historically agricultural, predominantly Italian-American Chester for their efforts to restore it. Hayes notes that although the group initially wondered how they’d be received, longtime local growers have offered tips and help and have been intrigued by urban-agricultural methods like raised beds and drip irrigation systems.

“Food grown with love and prepared with love is transformative,” says Hayes. It should be noted that she once “orchestrated a mutiny” at her former restaurant job when she realized that the back-of-the-house help traditionally didn’t sit down and eat with the waitstaff, bartenders, and management for family meals.  “In everything that we do, everybody has to be invited and at the table,” she says. “But you cannot expect them just to show up; you have to ask. It is because we’re rooted in one another that we can rise.”